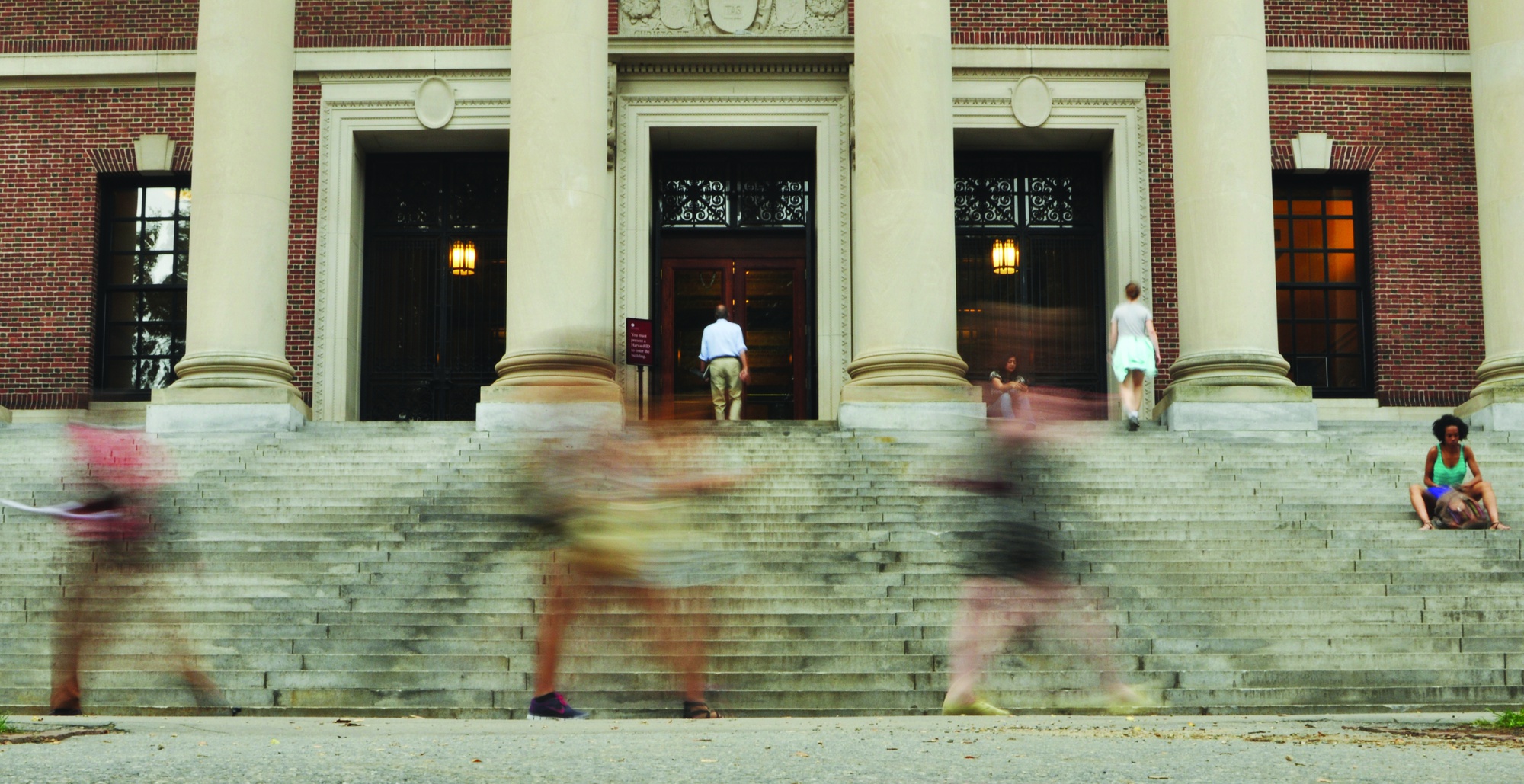 Students walk past Widener steps on Tuesday morning, beginning the academic year on a humid September day. Shopping week will continue until Tuesday, at which point students are expected to have solidified their course schedules.
By Pooja Podugu, Crimson Staff Writer

As Harvard students traversed the Yard and surrounding areas for the first day of fall classes, both first-time shoppers and upperclassmen encountered a number of class scheduling and enrollment issues over the course of the day.

Tuesday morning, the popular course selection website courses.cs50.net was plagued by technical difficulties, making it hard for many students to access class locations and meeting times. The website, designed and maintained by the staff of Computer Science 50: “Introduction to Computer Science I,” allows users to peruse the course catalog, explore classes viewed by friends, and plan out their shopping period schedule.

“We indeed received a few reports of issues this morning, whereby students were able to access CS50 Courses via 3G on phones but not via Wi-Fi on campus, which was consistent with what others were experiencing with some other sites,” wrote CS50 professor David J. Malan ’99 in an email to The Crimson.

Malan said the problem was due to trouble with Harvard’s network, not with the CS50 website itself. The issue also affected the Extension School website, the Harvard Art Museums website, and the HUIT website, among others.

Students and professors alike also noted overcrowding in many classrooms—a common phenomenon during the first days of each semester. This year, crammed into the seats and stairways of popular courses such as Science of the Physical Universe 27: “Science and Cooking: From Haute Cuisine to Soft Matter Science” and Economics 1010a: “Microeconomic Theory.”

According to Kennedy School professor Roger B. Porter, who teaches Government 1540: “The American Presidency,” “the number of students who attended class...substantially exceeded the number who registered for the course in the pre-term planning last spring.”

Education professor Katherine K. Merseth told The Crimson in an email that 240 students—double the PTP estimate—showed up to her class United States in the World 35: “Dilemmas of Equity and Excellence in American K-12 Education.” As in past years, Merseth said she will enroll students via a lottery, a measure she believes is necessary to keep discussions fruitful and to form personal connections with her students. Merseth will also teach the course again in the spring to accommodate demand.

Other professors reported numbers consistent with PTP estimates but still significantly higher than in previous years. According to applied mathematics professor Michael P. Brenner, approximately 400 students attended SPU 27 yesterday, 100 more than last year. Brenner said that he and co-professor David A. Weitz will increase the cap on enrollment from 300 to 350.

Brenner, along with other professors, expressed surprise at the high turnout. Though delighted by the interest in their courses, they noted that measures would have to be taken to reduce overcrowding.