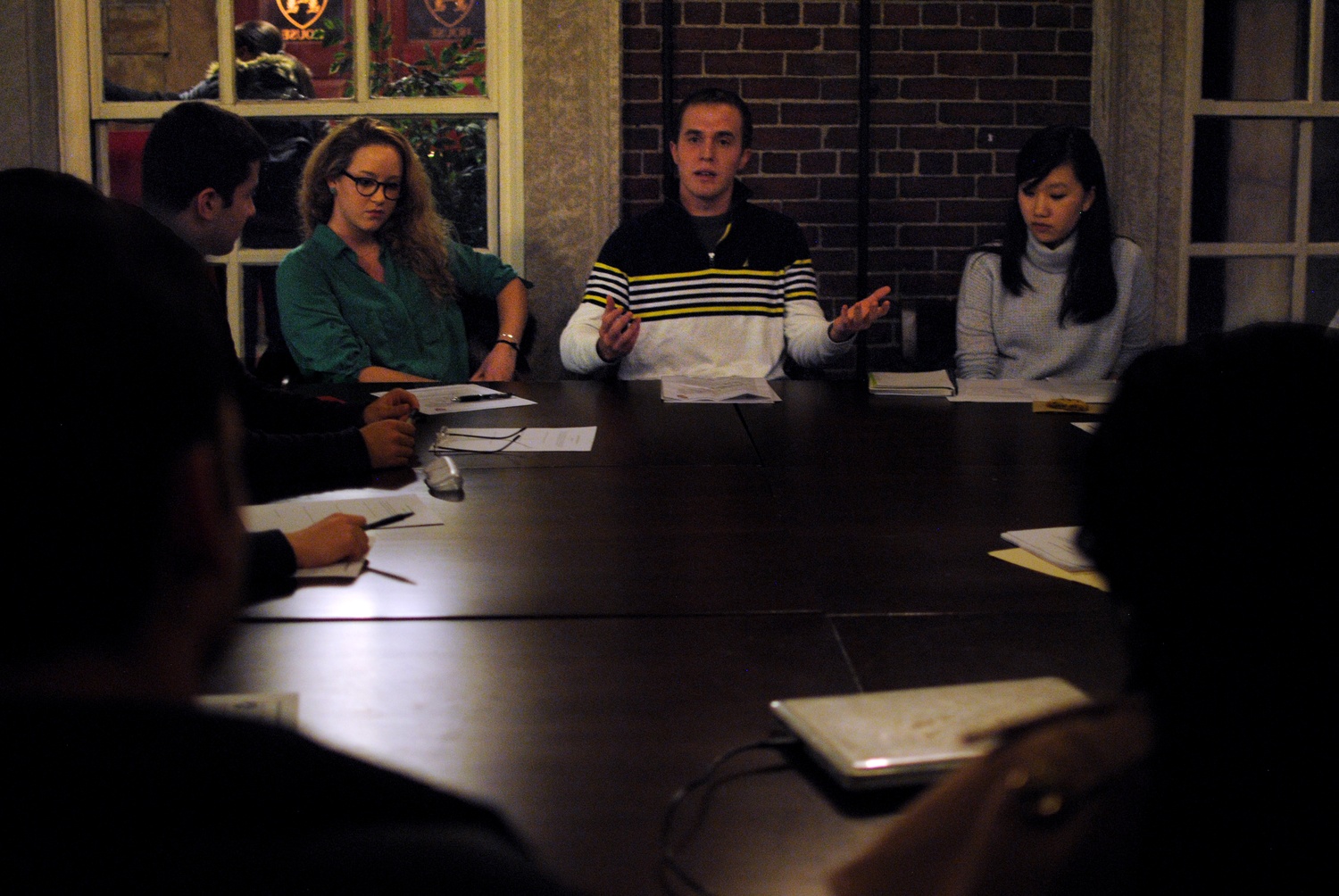 As expected, a draft of what would be Harvard College’s first-ever honor code calls for students to sign a statement affirming their commitment to academic integrity and gives them a role in hearing cases of academic dishonesty among undergraduates.

Student members of the Academic Integrity Committee shared the draft Tuesday evening at the first of four meetings scheduled to cull student feedback on the honor code draft.

Dean of Undergraduate Education Jay M. Harris said Monday that the “target” implementation date for the honor code is the fall of 2015. Before an honor code could be implemented at the College, the full faculty would have to vote to approve a draft. The elected Faculty Council is expected to discuss the honor code at its upcoming meeting Wednesday afternoon. 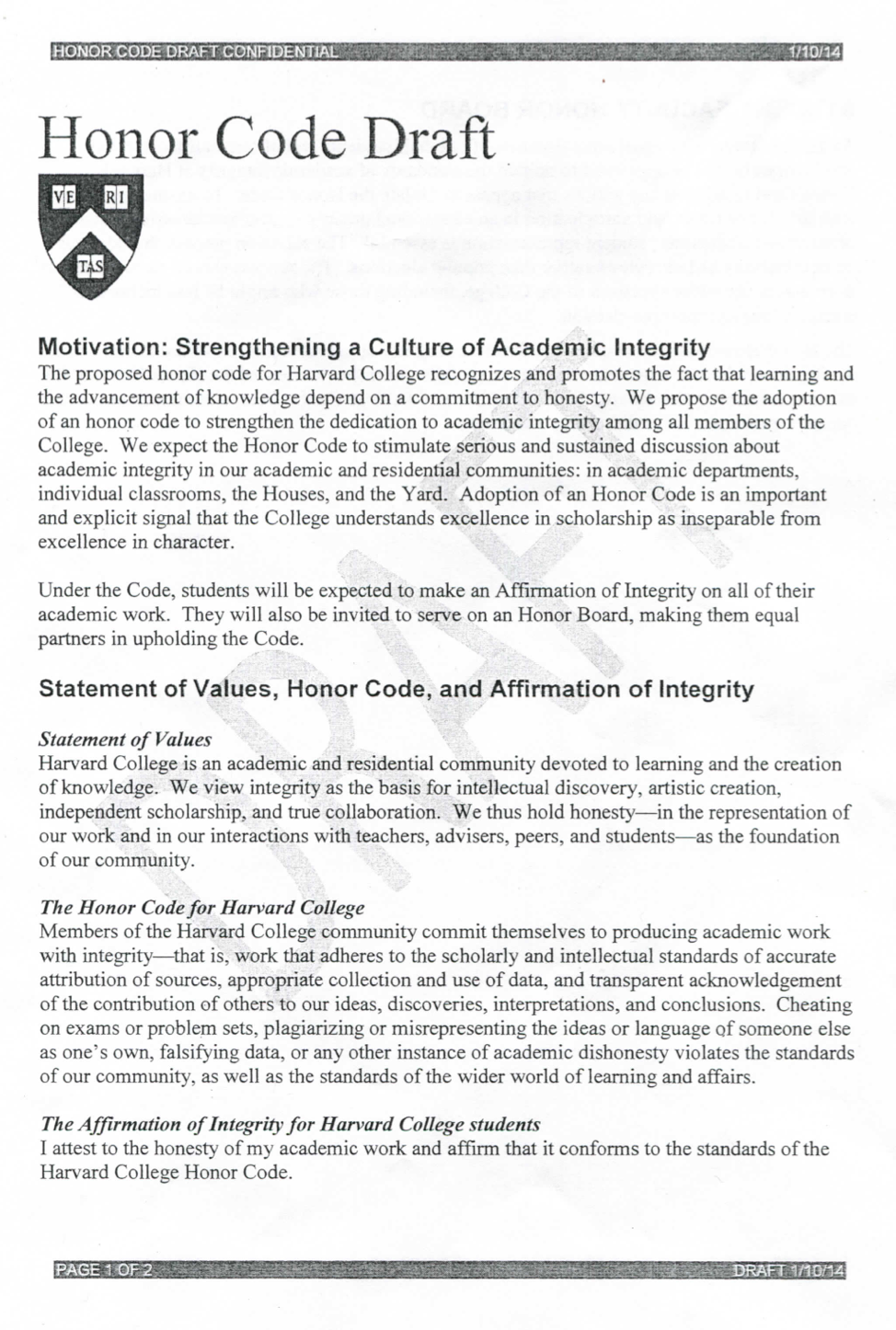 That document proposed, in part, that students be required to sign a “declaration of integrity” on major assignments and exams and the creation of a student-faculty judicial board that would hear cases of academic dishonesty, separate from the Administrative Board. The draft presented Tuesday, dated Jan. 10, is consistent with the spirit of both proposals, dictating a one-sentence “affirmation of integrity” for College students to sign and outlining guidelines for a “student-faculty honor board,” comprised of 50 percent students and 50 percent administrators and faculty.

As described in the draft, the proposed board would hear cases of honor code violations. The dean of the College would have the authority to decide whether the Ad Board or the honor board would hear a case that does not clearly fall under one body’s jurisdiction.

If the draft were approved as written, student members of the honor board would be selected not through popular election, but through interviews and nominations.

“The process should recruit students from across the entire spectrum of the College, including those who might be less inclined to engage in any competitive election,” the draft reads.

Just short of one-and-a-half pages long, the draft does not discuss possible sanctions that the honor board could hand down in cases under its jurisdiction.

The draft calls for students to make the integrity statement on “all of their academic work.” It reads: “I attest to the honesty of my academic work and affirm that it conforms to the standards of the Harvard College Honor Code.”

Three student members of the Academic Integrity Committee—Terah E. Lyons ’14, Jonathan G. Jeffrey ’16, and Olivia Z. Zhu ’15—presented the honor code draft at the meeting in the Adams Conservatory and then asked the eight students in attendance for feedback with several faculty and administrative members of the committee looking on. For example, the student presenters asked attendees for their thoughts on the appropriate circumstances when students should be required to sign the integrity statement.

Additionally, several students questioned what role faculty members would play in supporting the “culture of academic integrity” that the honor code calls for.

One attendee, Brett M. Biebelberg ’16, expressed concern that the language of the draft could place too much of the responsibility on students in preserving academic integrity. Faculty should also be part of the conversation, said Biebelberg, who represents Quincy House on the Undergraduate Council.

Jake N. Matthews ’16 later suggested that faculty members, like students, should be required to sign a statement indicating their commitment to the honor code.

For their part, the student presenters, all three of whom are members of the subcommittee charged with drafting the honor code’s language, agreed that faculty are a part of the broader discussion about academic integrity at the College. They also emphasized that the honor code draft was built around the entire College community, including students, faculty, and administrators.

“[Faculty are] a crucial aspect of this,” Lyons said. “It’s such a two-way street.... By no means do you have something that goes in one direction.”

The Academic Integrity Committee plans to hold three more student feedback meetings, the next on Wednesday evening in the Cabot House Living Room.