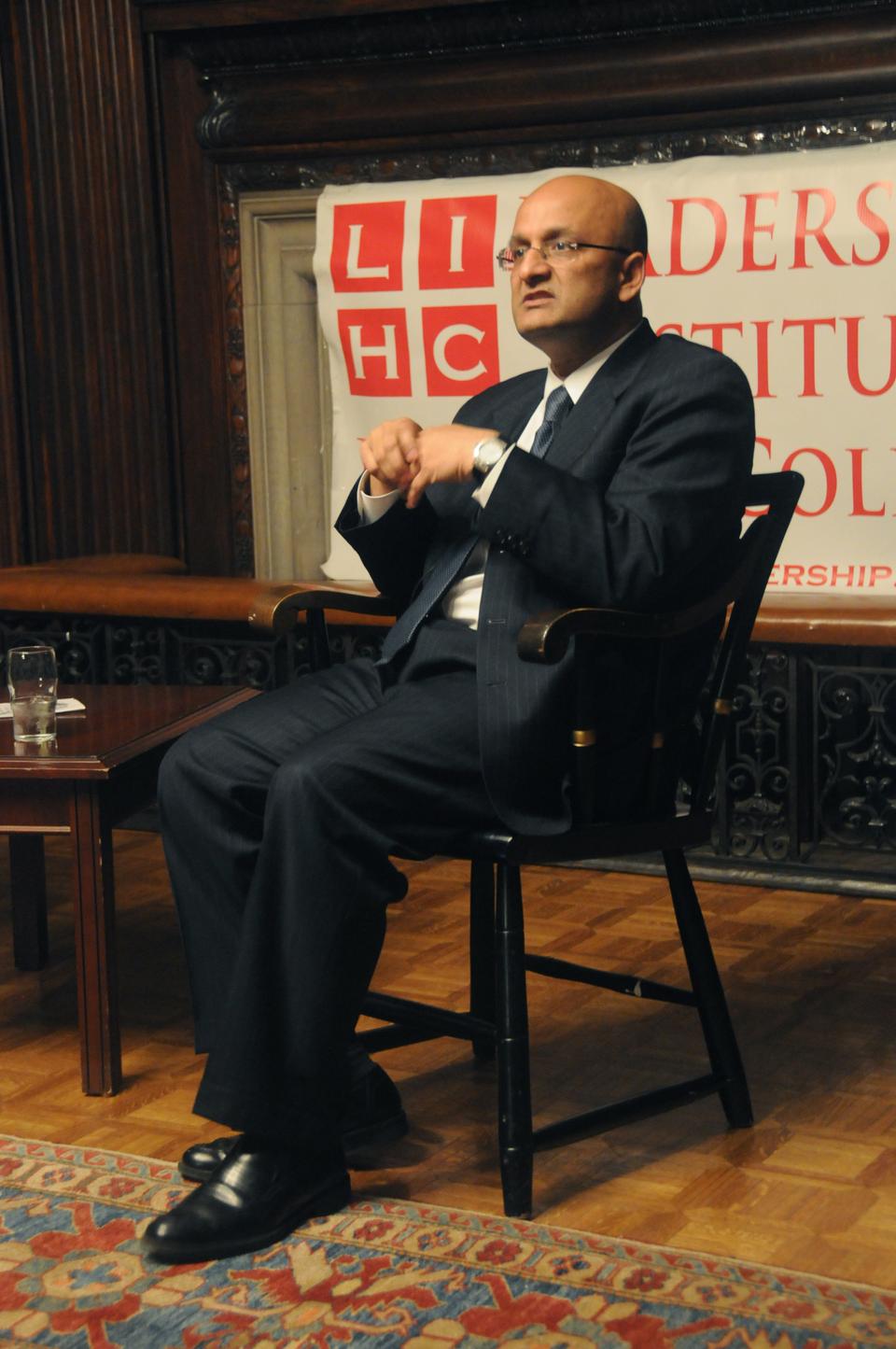 Harvard Business School Dean Nitin Nohria discusses the changing dynamics of business in a globalized world in a "Conversations with Kirkland" event sponsored by the Leadership Institute at Harvard College. By Karen Zhou

The percentage of female protagonists in Harvard Business School case studies will double over the next five years, Business School Dean Nitin Nohria pledged at an event on Monday celebrating the 50th anniversary of women MBAs at the school.

Speaking at a “50 Years of Women at HBS” gala event hosted by the Harvard Business School Association of Northern California Monday evening in San Francisco, Nohria apologized for the school’s historical disrespect and negligence towards women, according to an article on the blog  Poets & Quants chronicling the event. In addition to pledging to augment female representation in case studies, he affirmed the Business School’s intent both to assist women in serving on boards of directors and to encourage networking between female alumnae and students.

"The school owed you better, and I promise it will be better," Nohria.

Fifty years after women were first admitted to the two-year MBA program, the Business School continues to face difficulties in retaining and attracting female professors, and many of its female students have fallen behind their male peers, the New York Times reported in September.

Currently, nine to 10 percent of case studies developed and disseminated by the Business School—which produces more than 80 percent of cases sold globally—feature women as protagonists. By contrast, 41 percent of the MBA Class of 2015 are women.

Carin-Isabel Knoop, executive director of the Case Research & Writing Group, an organization housed within the Business School which has consulted in the development of more than 840 case studies, said that cases tend to involve situations in which a decision maker is in a position to meaningfully affect his or her organization.

As a result, she said, the protagonists of case studies produced at the Business School have tended to come from the highest levels of management—positions that men more frequently hold than women. As of Jan. 2014, for example, only 23 companies within the Fortune 500 had female CEOs.

Recently, however, the number of female protagonists in cases consulted upon by Knoop’s research team has grown, she said, primarily as a result of a diversification of the type of case study the school produces.

“We have been writing more entrepreneurship cases and cases that use protagonists at different levels in the organization,” she said. “We have seen more and more women protagonists recently.”

But Reena A. Jadhav, a serial entrepreneur who graduated the Business School’s MBA program in 1998, said that the school still lags in drawing from its robust female alumnae network for its case studies. She cited a lack of outreach by faculty and researchers to female graduates like herself.

“When we talk about bringing in more female-centered cases,” said Jadhav, who has been involved in the founding of four startups since her departure from the Business School, “I think that it’s just a matter of reaching out to more HBS women that are out there—that are having these incredible experiences, but have not yet been contacted to get their stories into cases.”

While a goal of 20 percent representation may seem too low some—according the article in Poets & Quants, attendants of Monday’s event let out an audible sigh at Nohria’s promise, thinking it was not ambitious enough—the objective is laudable, Jadhav said.

“I’m a very firm believer in the butterfly effect,” she said. “I really believe that all of these little things will together add up to create a positive change for women at work. I think it needs to happen at every level, because nobody talks about this.”

In terms of the process of case study production, Knoop said, Nohria’s announcement might lead to more referrals both to and from female industry leaders interested in the case development process—and in sharing the hurdles and triumphs that they have faced in their careers.

—Staff Writer Alexander H. Patel can be reached at alexanderpatel@college.harvard.edu.