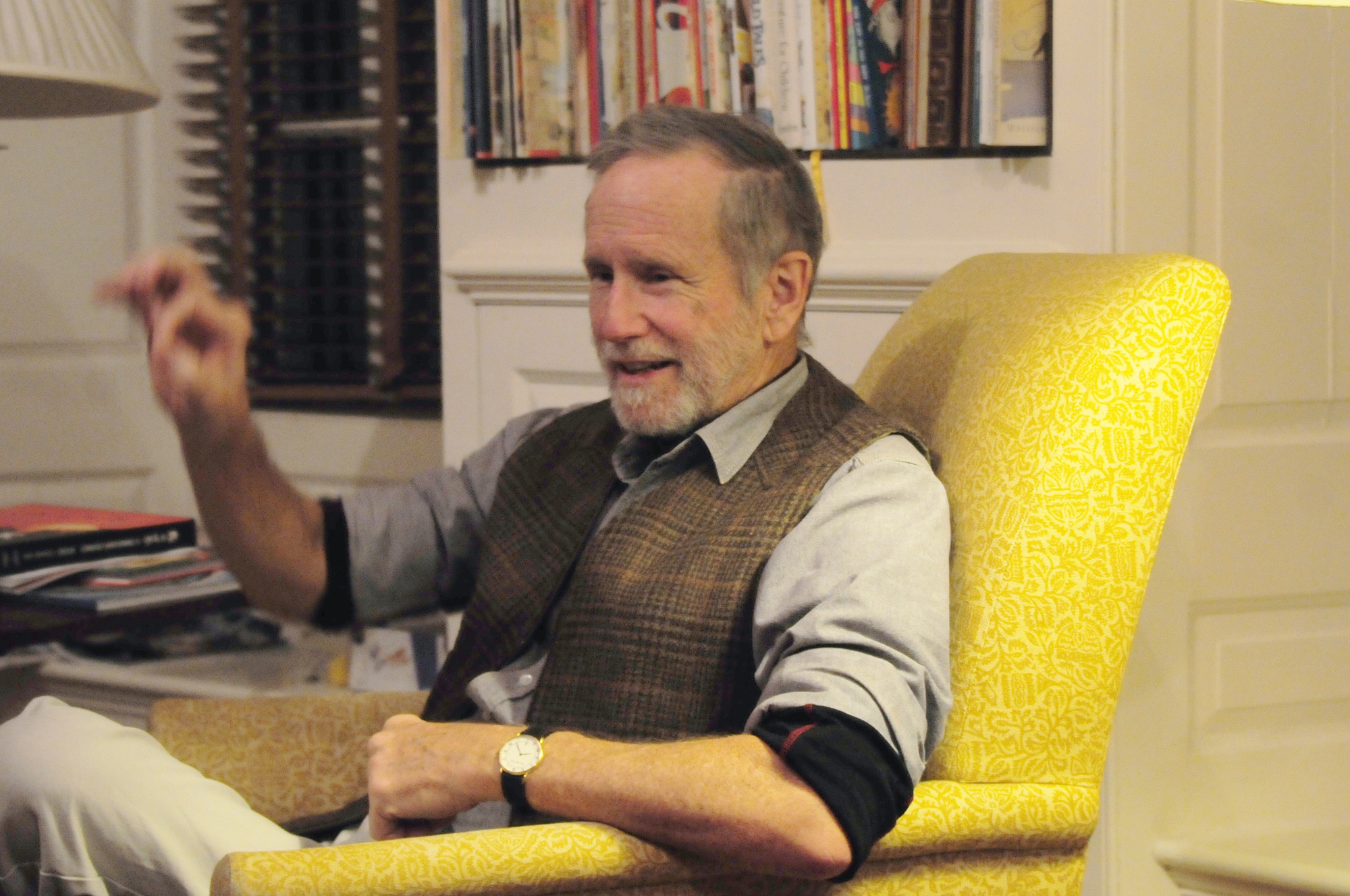 Tucked away in Randolph Courtyard, removed from the chaos of Cambridge, Apthorp House is one of the city’s oldest surviving houses. FM was granted an exclusive tour from the current Housemasters of Adams, Judith “Judy” S. Palfrey ’67 and John “Sean” G. Palfrey VI ’67. Come with us as we check out the Palfreys’ crib (literally).
By C. Ramsey Fahs

Pistol firings, pet monkeys, British prisoners of the Revolutionary War, Theodore Roosevelt’s childhood crib, bawdy wall-cartoons, ghosts, and a bookshelf of bathroom reading. No, these aren’t elements of a surrealist painting; they’re all bits of the storied past of Apthorp House, Adams House Master’s residence. Tucked away in Randolph Courtyard, removed from the chaos of Cambridge, Apthorp House is one of the city’s oldest surviving houses. FM was granted an exclusive tour from the current Housemasters of Adams, Judith “Judy” S. Palfrey ’67 and John “Sean” G. Palfrey VI  ’67. Come with us as we check out the Palfreys’ crib (literally). 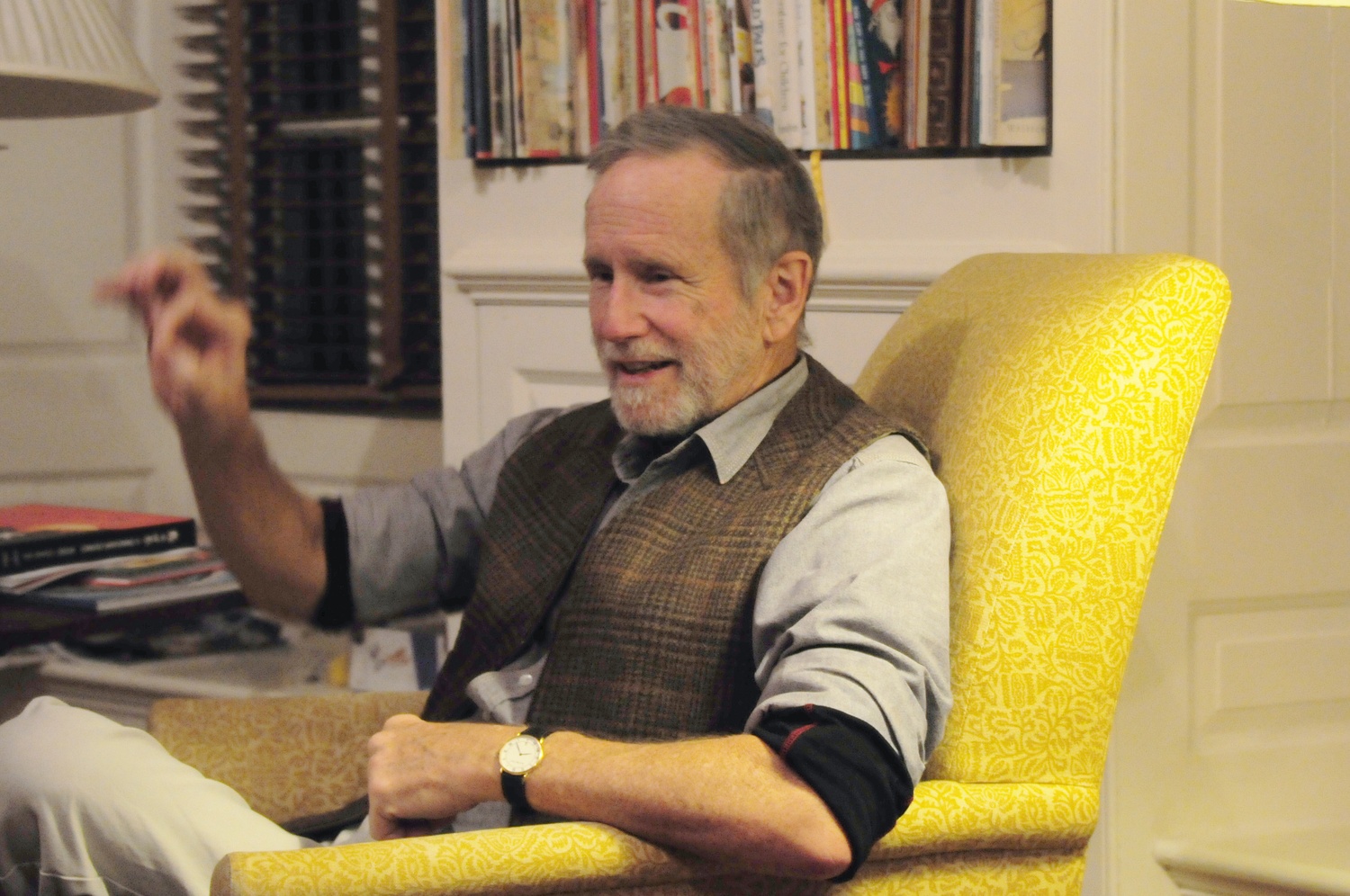 A Brief History of Apthorp

After being greeted by Sean Palfrey at the front door, I was led into a bright, cozy library. The walls—lined with shelves that are crammed with books and knick-knacks, and paintings from the Fogg—lend the library an understated grandeur. A bout of “dense laryngitis” had reduced Sean Palfrey’s voice to a kind of reverent whisper, which seemed somehow fitting for an  overview of the history of Apthorp House.

Rev. East Apthorp built the house in 1760. Apthorp’s tastes, far from modest, offended the Calvinist sensibilities of Cambridge at the time, and by 1764 he was charting a course back to England. During the Revolutionary War, the house was used as a barracks, and served as headquarters to General Israel Putnam during the planning for the Battle of Bunker Hill. Later in the war, Apthorp House housed British prisoners, including Gen. John Burgoyne, who routinely griped about what an unpleasant place it was.

After the Revolutionary War ended, the house bounced around from private owner to private owner, until it became a boarding house for wealthy students—part of the Gold Coast—in 1900. Its tenure as a boarding house is one of the most colorful aspects of its history. From pistol practice and playing football in the hallways, to pet monkeys that swung from chandeliers, the boarders of the Gold Coast put modern day frat houses to shame with their Gilded Age antics.

When the school started the House system in 1930, Apthorp became part of the new Adams House, and, after a few renovations, was made the House Master’s residence.

The first floor abounds with open space and light. “This floor is really a public home for the students in Adams House,” says Sean Palfrey. “We want them to see it as that; the fire’s warm, and we just try to make it warm and welcoming all the time.”

Just outside the library, a miniature figurine of General Burgoyne hangs in the hallway, encased in a tiny jail made by Sean Palfrey. We’re next given a peek at the first floor bathroom, furnished with photographs taken by Sean Palfrey himself.

Next up is a necessary anomaly: the sleek, modern kitchen. Five refrigerators and six ovens provide food for events in Apthorp that can draw as many as 300 people.

The last stop is the dining room, decked out with even more art from the Fogg. A working fireplace (a rarity at Harvard) lies near a sketch of colonial revelers.

The second floor is the personal residence of the Palfreys and their family. Although we didn’t spend much time on this floor, Judy Palfrey did highlight a glowing example of Rev. Apthorp’s extravagance: “He had closets full of closets. There’s literally a room [on the second floor] that had five closets in it.” 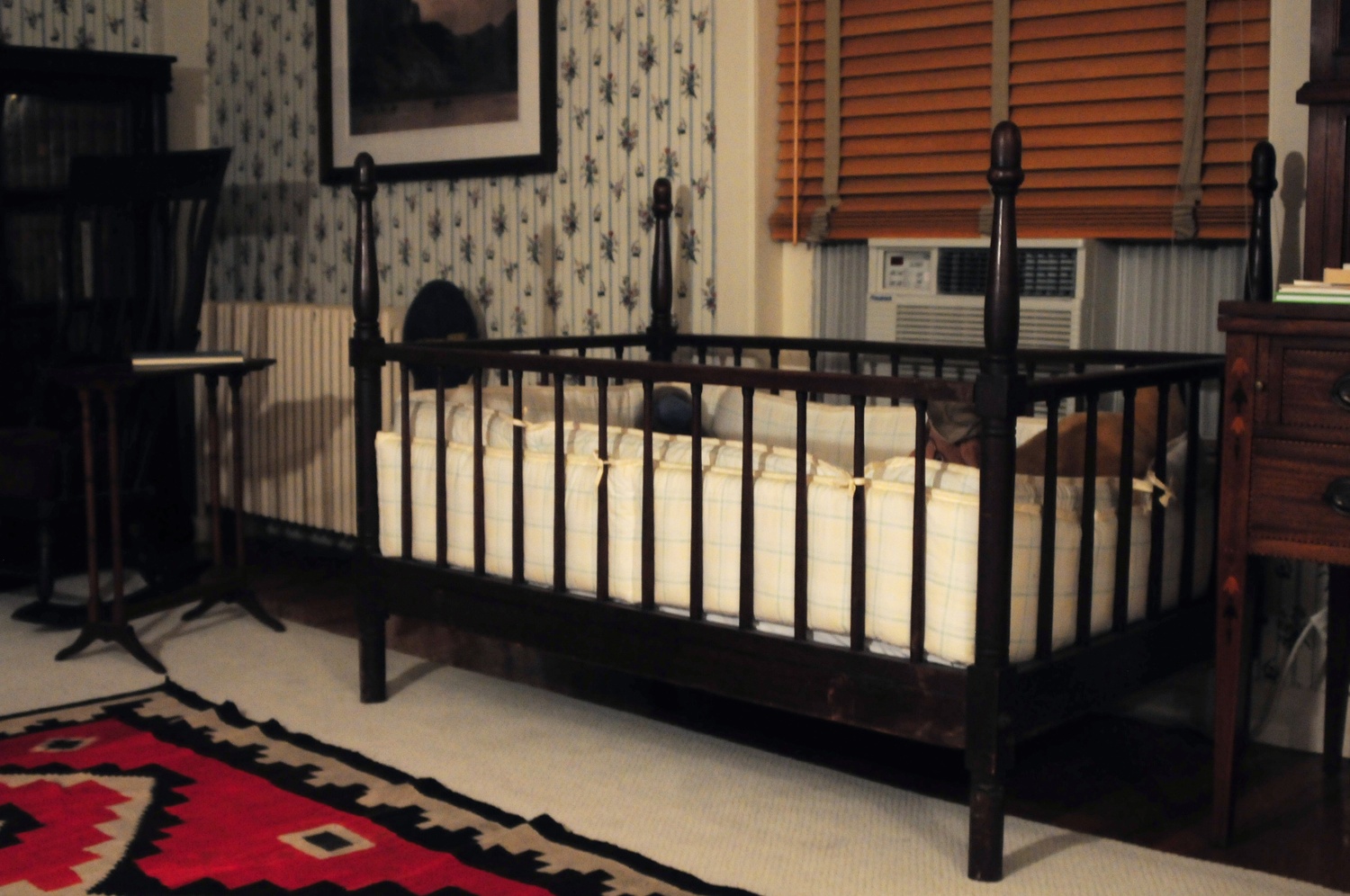 Although Adams house is known as FDR’s former home, Sean Palfrey brought a connection with another Roosevelt to Adams House when he began his tenure. Sean Palfrey is Theodore Roosevelt’s great-grandson, and consequently owns the crib that Teddy slept in as a baby. The crib sits inside the third floor “Roosevelt Room,” a guest room dedicated to all things Teddy. Posters of Teddy Roosevelt adorn the walls around the crib, and the low ceilings (only around 6’ 4’’ high) make for a tight fit for certain students visiting the room.

The fourth floor has been largely untouched since Apthorp transitioned to being the House Master’s residence in 1930. Drawings by Gold Coast inhabitants still festoon the walls: monkeys, scantily clad women, and men in suits are among the graffiti etched upon the walls.

The fourth floor also serves as the cat’s refuge from the ghost. That’s right, evidently Apthorp has a ghost. “Our cat has seen one,” says Judy Palfrey.“She comes up here when it spooks her out.” Though legend has it that the ghost is the soul of Gen. John Burgoyne, the Palfreys are skeptical. “He didn’t die here,” says Judy Palfrey. “But there is a ghost, so maybe it was one of his men.” 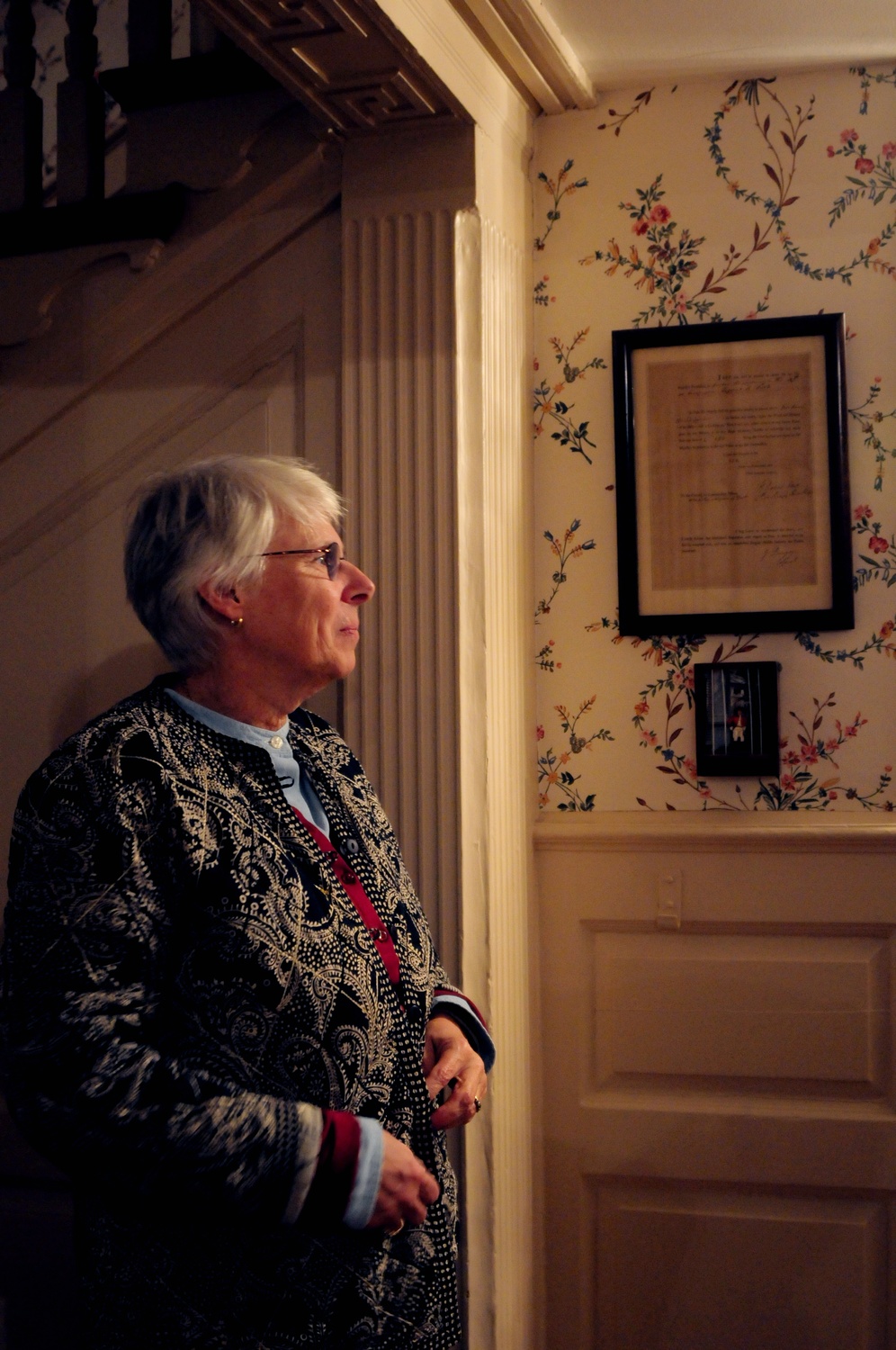 Though the fourth floor is rather barren now, the Palfreys hope that a student might be able to change that. “A project we would love to do at some point is renovate this to be the way it was when the students were here. The idea is one side would be when the revolutionary soldiers were here, and the other side would be when the students were here,” says Sean Palfrey. “[We’re] looking for a student of history or design or architecture to do a thesis on restoring this to what it might’ve been like. Spend all the time they want to, here, and study the history and help us figure out how this place would’ve been furnished.”

The Palfreys were central in the completion of a similar Adams restoration: that of FDR’s former room in Adams B-17. “We’ve really restored [the FDR suite] with as close to a historic replica [as possible] of what it was when he was here,” says Sean Palfrey.

Indeed, one of the central goals of the Palfreys’ tenure has been the historic preservation of Adams House. “It’s an extraordinary house, it has so much history and so many cool nooks and crannies,” says Sean Palfrey. “You want the students to experience every corner of it.”

When the Palfreys moved in and the house underwent renovations, they were adamant that it be kept as original as possible. “The one thing I asked when we renovated this place was: ‘make sure we don’t fall through the floor, but aside from that, leave it the way it is, because it’s very cool looking,’” says Sean Palfrey. “We mostly wanted it to be historically—not accurate, exactly, but at least possible. We wanted it to be real. Harvard would’ve made it Danish Modern if we’d asked them to, but we didn’t want that.”

The changes that were implemented during the renovation had to do with making Apthorp more accessible and open to all students. Wheelchair accessibility to Apthorp, while not ideal, is far better than it once was. Additionally, the Palfreys have made an effort to decorate in a way that accommodates the background of any student. “We sort of wanted to make this feel, for anybody from anywhere in the world, sort of comfortable,” says Sean Palfrey. “So we’ve got things from China, Africa, South America, Native American artifacts.”

Before we leave, we take one final look at a photograph on the wall of the first floor bathroom. A multiple exposure, the photo was an image of the library as it exists now, open and bright. Overlaid atop the library is the sketch from the dining room of colonial revelers, come back from the past to bask in Apthorp’s renewed and continued splendor.