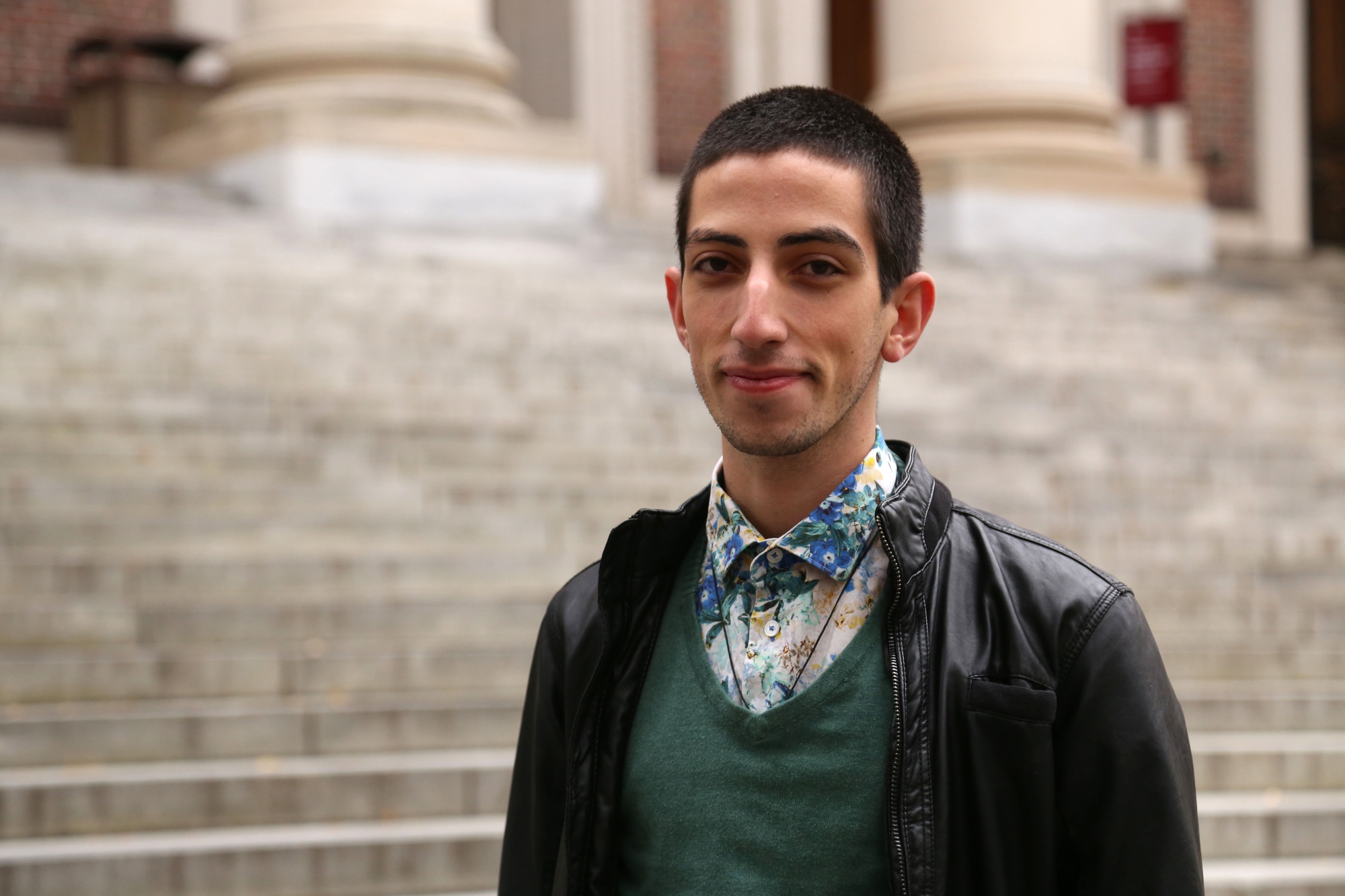 Cengiz Cemaloğlu '18 is a prospective psychology concentrator and was the director of Reality Theatre Co., a company that socially engineers experiences.
Advertisement
Advertisement

“Our mission, as we state in our website, is the enhancement of human existence through the advancement of the field of social engineering,” Cengiz Cemaloğlu ’18 says. He’s talking about Reality Theatre Co., a Hong Kong-based company of which he was the director last year. During his senior year of high school, he says that Reality Theatre Co. netted $110,000, completed 34 out of its 35 projects successfully, and received 120 proposals.
By Libby R. Coleman and Annie K. Winerip

“Our mission, as we state in our website, is the enhancement of human existence through the advancement of the field of social engineering,” Cengiz Cemaloğlu ’18 says. He’s talking about Reality Theatre Co., a Hong Kong-based company of which he was the director last year. During his senior year of high school, he says that Reality Theatre Co. netted $110,000, completed 34 out of its 35 projects successfully, and received 120 proposals.

At Reality Theatre Co., the potential services vary wildly. Cemaloğlu lists examples. Want a wedding featuring “a swimming pool with people dressed in Indian garments”? Check. How about a dream re-enactment where you’re kidnapped—safely? Double check. Need a fake girlfriend? That can be arranged. How about influencing the relationship of two feuding employees so that they sing kumbaya, without them knowing of your involvement? They may have just the right actor, and plan, to make that a reality.

Could it be engineered so that your neglectful son calls you more often? Cemaloğlu explains that they’ve done it already: After several days of “shadowing” a woman’s son, Reality Theatre Co. paid old women to bump into him in his most frequented haunts. These women told sob stories about their own made-up families. “At the end of the week the guy thinks, is this a godly coincidence?” Cemaloğlu says. He claims that the son called his mother to set up a dinner that Friday.

If this is starting to sound like a screenplay or science-fiction, Cemaloğlu understands. But he assures us that it’s real. With him, though, it’s hard to really know.

Cemaloğlu wears a green sweater and a black leather jacket when we sit down in the Harvard Foundation’s office, where he works as an intern. He draws our attention to the desk in the room, the binders on the wall, the white cinderblock; “You never think of changing it, right? You’re not pushing the desk, but I could,” he says.

Cemaloğlu’s life has been peripatetic. Born in Azerbaijan, his family moved to Turkey when he was four years old. He grew up in Istanbul, mostly, though he also spent stretches of time in a host of other countries. He lists his native languages as Azeri and Russian, though he also says he speaks Turkish, French, Spanish, Chinese, English, and Indonesian with varying levels of fluency.

For high school, he moved again to attend Hong Kong’s United World College, which enrolls students from every country in the world. “The idea is that you get over your stereotypes of any nation, any religion, any language, and you see how similar you all are,” Cemaloğlu says.

Gabriel Otoya was one of Cemaloğlu’s peers at United World College. He describes himself, Cemaloğlu, and one other peer as the primary coordinators of Reality Theatre Co.. He explains that Cemaloğlu explored ideas about theatre and reality’s convergence during his time at United World College. Otoya relates an anecdote: For a final project, Cemaloğlu staged a production that began as a “cheesy, romantic play,” until an alarm went off. It was all planned, though most of the spectators didn’t know it. The audience was hurriedly evacuated.

Once outside, they saw that one of the actors in the play—another student—had been injured. Next, more actors joined the scene, adding in fantastical elements like one that Otoya describes as “zombie”-like. The performance “engaged the observers and created this active reflection process,” Otoya says.

Another example of blurring acting and reality involves a student group called Initiative For Peace, where Cemaloğlu created an activity in which students simulated conflicts. The exercise required that Christian students pretend to lose their wallets and then blame Muslim students. Each time it lasted hours. The goal of the exercise was to make the students feel “real emotions,” he says.

So when exactly did his services become for-profit? Cemaloğlu laughs when he tells the story. He attended a dinner party at one of the highest points in Hong Kong, home to expensive real estate prices and incredible views, where the conversations turned to dreams. The hostess explained that she wished her husband could also see a recent dream she had had. He and others offered to re-enact the dream and she offered payment. This relationship later helped garner connections with Hong Kong’s elite as she recommended Reality Theatre Co.’s services to her friends.

The company’s website poses the question: “Is there anything you would like to change in your life or in others' lives?” Then it elaborates, “We would be glad to utilize our social engineering methods with you.” These methods include employing actors, sociologists, anthropologists, psychologists, and more to determine a way to change a person’s life.

Just because a project was possible to execute, didn't mean that Reality Theater Co. would take it on. Projects were vetted based on two criteria: “meaning” and “impact.” Cemaloğlu and a team of peers voted on whether a proposal met both. He says that it was extremely important that each project made everyone involved better off.

You can imagine that the responses have not always been positive. For example, two weeks into freshman year, he told an actress at Boston University about Reality Theatre Co., thinking she would be a good fit for the company. Instead of being flattered, she thought it was creepy. Reality Theatre Co., after all, deals in solving problems in “taboo” areas. “This is the one last bit of peace that is not commercialized in our life, our social life. Our friendships, our loves, except prostitution,” he adds, “are not commercialized.” He elaborates, though, that commercializing these aspects of life is not his goal.

This relates to his biggest dilemma: using the company’s potential for good. “It’s like an atomic bomb,” he says. “It can be used for good; it can be used for extremely dangerous purposes.”

He speaks grandly about the stakes without a hint of humor. “If these tools get into the wrong hands to be used for the wrong purposes, it can really distort the human existence,” he says.

With its previous team members dispersed to different colleges, Reality Theatre Co. is on hold for the moment. Cemaloğlu says his choice of Harvard was a “game breaker” since he wouldn’t be staying in Hong Kong. Nonetheless, he says he thinks about Reality Theatre Co. “24 hours a day,” and has big plans for it in the future.

His long-term hope is to transition to the United States and have three hubs in New York, London, and Hong Kong. First, he’s looking for a co-founder in the United States, which will be critical to starting up in America.

In the interim, he expects to concentrate in psychology at Harvard and is focusing on classes, comps, and meeting at least one new person a day. He explains the impetus: “I know that every single person...is going to help me in the future.”

As we leave, he imparts a bit of philosophical wisdom, quoting a proverb. “The one who never takes risks, never gets to drink champagne.” And then he calls in a troupe of actors to serve us champagne out of a golden tub. Well, not really—but maybe he could have.