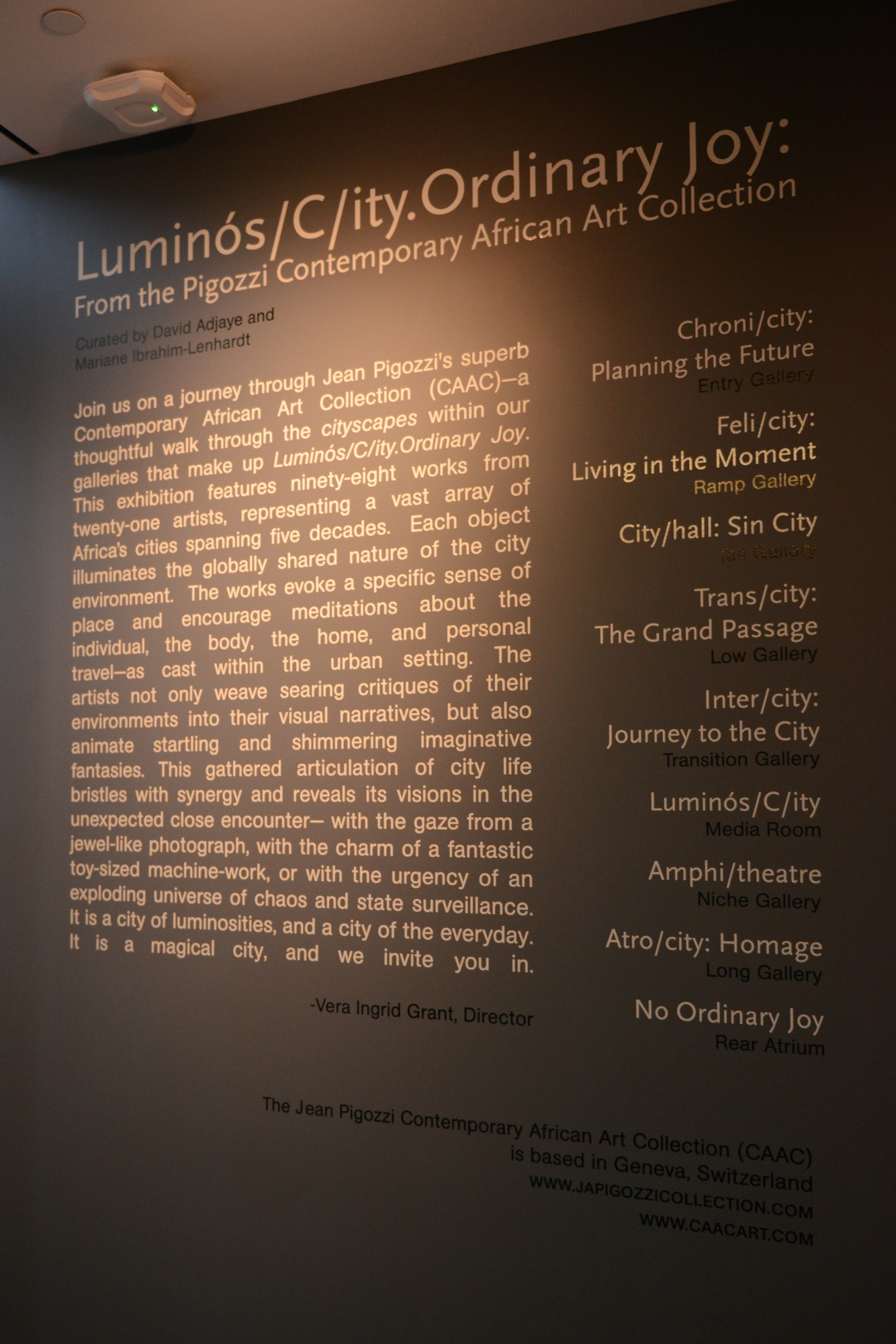 Artwork lines the walls of the newly-opened Hutchins Center. The artwork reflects on and praises the African lifestyle.
Advertisement
Advertisement

Last month saw the opening of the Ethelbert Cooper Gallery at the Hutchins Center, the first museum on Harvard’s campus dedicated solely to African and African American art. The inagural exhibition, creatively entitled Luminós/C/ity.Ordinary Joy, seeks to capture the multifaceted components that make up African city life through modern art. Equipped only with the knowledge of this title—which itself, I have to admit, wasn’t especially descriptive—I decided it was time to check out the new installation, located next to Peet’s Coffee in Harvard Square.
By Zoe Y, Oz

Last month saw the opening of the Ethelbert Cooper Gallery at the Hutchins Center, the first museum on Harvard’s campus dedicated solely to African and African American art. The inagural exhibition, creatively entitled Luminós/C/ity.Ordinary Joy, seeks to capture the multifaceted components that make up African city life through modern art. Equipped only with the knowledge of this title—which itself, I have to admit, wasn’t especially descriptive—I decided it was time to check out the new installation, located next to Peet’s Coffee in Harvard Square.

Upon first walking in with a photographer, a seated security guard was quick to remind us that no photography was allowed. But after informing the museum supervisors that I was here with The Crimson, the curator, Vera Grant, swiftly proposed a private tour and extended us the freedom to photograph every moment. Coincidentally, Glenn H. Hutchins ’77, who endowed the Hutchins Center, arrived at the same time to explore the space. Together, we embarked on a tour.

Thick wooden beams, intended to imitate both trees in an African forest and the openness of nature, lined the windows. The gallery wound its way through narrow, dimly lit hallways, giving off a general sense of uneasiness. The often somber subject matter presented in the exhibit was well paired to its backdrop. 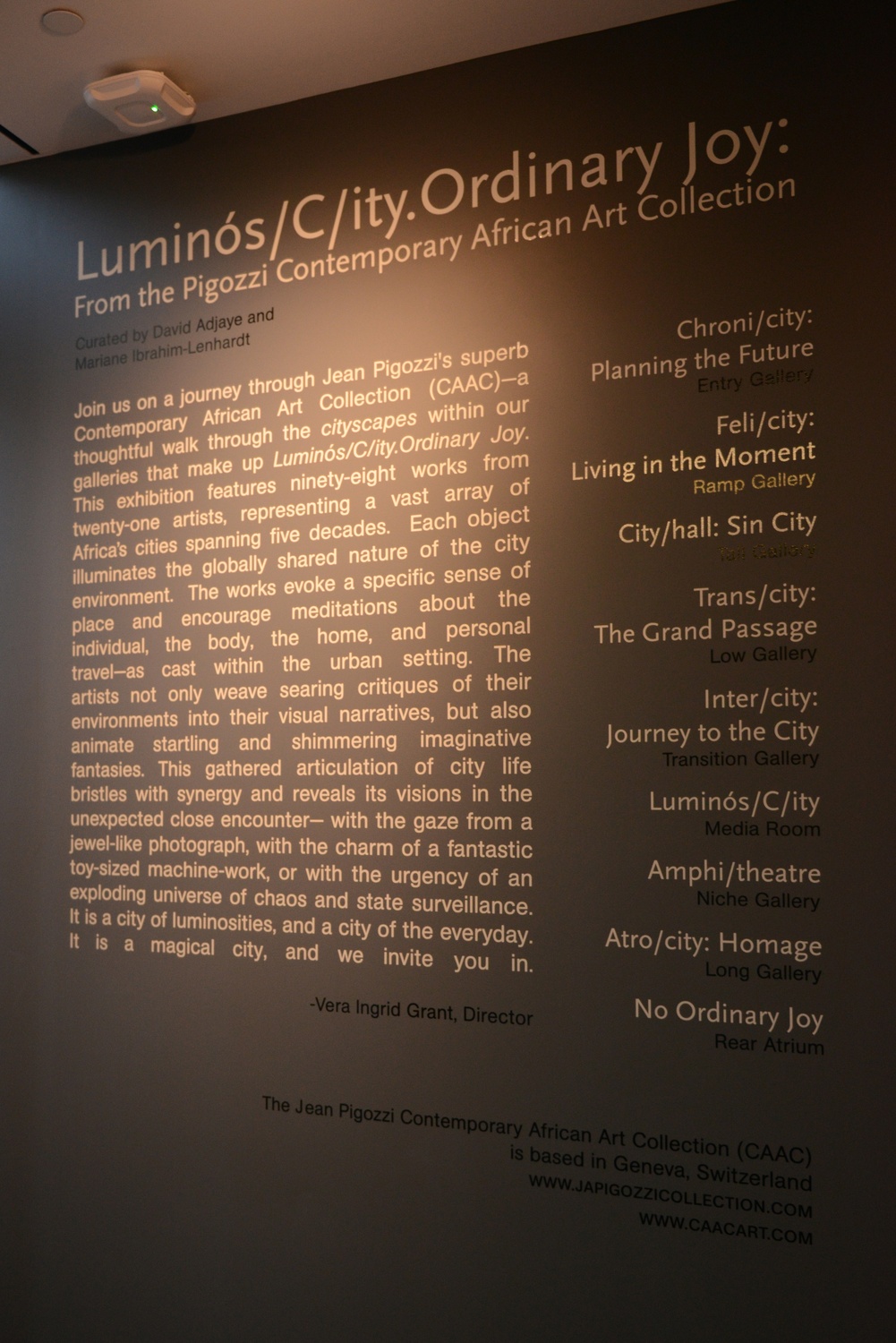 By Vincent A Breet

In an art exhibit all about innovation, identity, and urbanity, the ambiance was arguably the most important component. From the outset of the tour, it was clear that the new gallery made this integration of art and atmosphere its main goal, assimilating distinct aspects of African culture within the display’s structure and use of space. Writen in big letters on the wall were the themes that organized the art, including: “Sin City,” “Inter/city,” and “Atro/city”. Each room in the gallery was dedicated to one of these ideas.

Spanning 98 works by 21 artists—most of them living—the collection aimed to encompass all aspects of the African city while praising everyday, “ordinary” joy. Contrary to what I expected, most of the art didn’t appear to reflect joy at all; some of the pieces depicted weapons, and others commented on poverty and greed. The artwork seemed to expose a fragmented society filled with anxious voices and conflicted attitudes about individual identity and cultural pride. Of course, he semi-claustrophobic space helped contribute to the existing tension.

Much of the art commented on the conflicted identity experienced by the portrayed Africans, the struggle between maintaining a traditional culture and absorbing Western, modern notions within city life. Rows of photographs down a hallway depicted children dressed in customary African garb yet flaunting glitzy jewelry and high-heels.

Many of the prominent installations showcased startlingly bright colors and bizarre structures, resembling dollhouses more than an artistic creation. The centerpiece of the exhibition was a structure about the size of a ping pong table, constructed by Bodys Isek Kingelez, an African sculptor. It depicted a miniaturized cityscape made up of what appeared to be typical urban buildings but distorted by color or structural impossibilities.

According to Grant, Kingelez used this fantastical vibrancy to comment on the excess and immorality beneath the attempted development of African metropolises, like his hometown in the Congo. “He is at once creating a joyful, imaginative view of what it could be like and critiquing the idea that you have these grand plans of African cities that never get manifested,” Grant explained. “It’s pointing to world debt. It’s pointing to corruption. It’s pointing to plans that were never realistically thought out.”

The city was represented as an ambivalent backdrop, providing opportunity and glamor, but also deception and loss. Grant commented on the work of one artist in particular, Kudzanai Chiurai of Zimbabwe. As he struggled with city life, she explained, he looked at “what life is like in an undemocratic, political zone where you have the cult of personality, where guns are a positive, visible part of your presence on the street, and where your administrators are celebrated as part of the corrupt atmosphere.” While the pieces came in a wide array of media—sculpture, painting, video, and drawing—many touched upon these same ideas of sin and destruction within African urban communities.
If anything, the museum presented a jarring though unsurprising depiction of past and modern African turmoil. In an area scarred by historical torture and plagued by modern atrocities, the artists attempted to create joy, through whatever means possible.

Unexpectedly, the most impressive aspect of my visit wasn’t the art itself, but rather seeing the artists in communication and in response to one another. While many seemed to be exposing a particularly fractured society, others skillfully generated moments of beauty and illumination in a complex and exquisite culture. Among the latter was J.D. ‘Okhai Ojeikere, a Nigerian artist who depicted ornate hairstyles of African women through a series of photographs, celebrating the splendor and creativity of Nigerian societal life. Because of the small space, both genres were immediately juxtaposed, creating a perplexing, yet startlingly realistic representation of the artists’ sentiments.

The very last installation was a large bicycle made primarily out of wood and rope. In an exhibition featuring nuanced commentaries on the implications of the city, this served as a reminder of the “ordinary” joy that can accompany simple and everyday life.