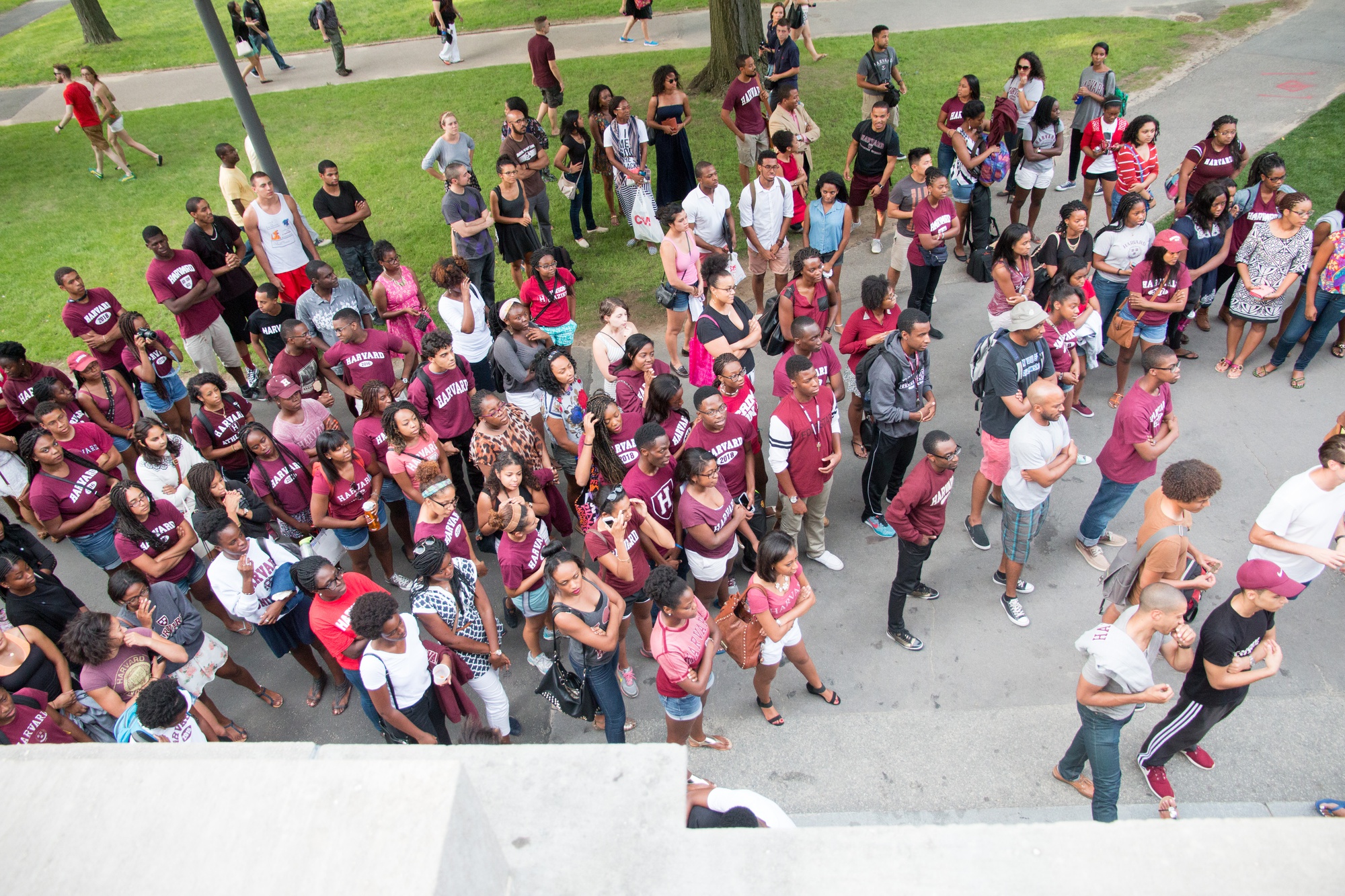 Nearly 200 black Harvard affiliates posed with their hands up for a group photograph on the steps of Widener Library earlier this fall evening in solidarity with Michael Brown, an unarmed black teenager killed in early August in Ferguson, Missouri.
By Quynh-Nhu Le, Crimson Staff Writer

Harvard students joined thousands of Boston community members in a city-wide rally Tuesday evening to protest a grand jury’s decision to not indict a police officer in the death of a black teenager in Missouri.

Boston’s rally, which was organized by community organization Black Lives Matter Boston, was one of ten affiliated rallies which occurred in cities across the U.S. to protest the controversial decision.

The St. Louis County grand jury announced Monday night that it would not charge police officer Darren Wilson for fatally shooting black teenager Michael Brown in Ferguson, Mo.. The shooting, which took place in August, has sparked sometimes violent protests and national media scrutiny over the circumstances of Brown’s death, the police response to subsequent riots in Ferguson, and more broadly, race relations in the U.S.

Dozens of Harvard students participated in the rally, both individually and in small groups. While some opted to take public transportation, student leaders of the Philip Brooks House Association organized drivers to transport about 50 students to the rally in the organization’s vans.

The rally began in front of a police station in Roxbury, a predominantly black and low-income neighborhood in Boston. Many of Harvard’s participating students wore clothing with the Harvard name and logo, holding signs with messages such as “We at Harvard Stand with Michael Brown” and “The Progressive Jewish Alliance Stands in Solidarity with Mike Brown.” They were joined by college students from other local universities, including Boston University and MIT.

As the night progressed, participants marched towards South Bay, with some pausing to chant, “No justice, no peace!” as they passed the South Bay House of Corrections, prompting inmates to cheer from behind barred windows. The protesters ultimately dispersed after police officers blocked their entrance to the I-93 highway.

Cornelius Lee Jr., a Graduate School of Design student who participated in the rally, said he felt it was necessary for Harvard students to attend and represent Harvard and other elite institutions, which have not always been inclusive of minority groups.

Keyanna Y. Wigglesworth ’16, political action chair of the Black Student Association and another rally participant, concurred. She said that while Harvard students should not come with a mindset of “saving anybody” or minimizing the voices of the affected communities, she believed Harvard students ought to leverage the institution’s name to advocate change. 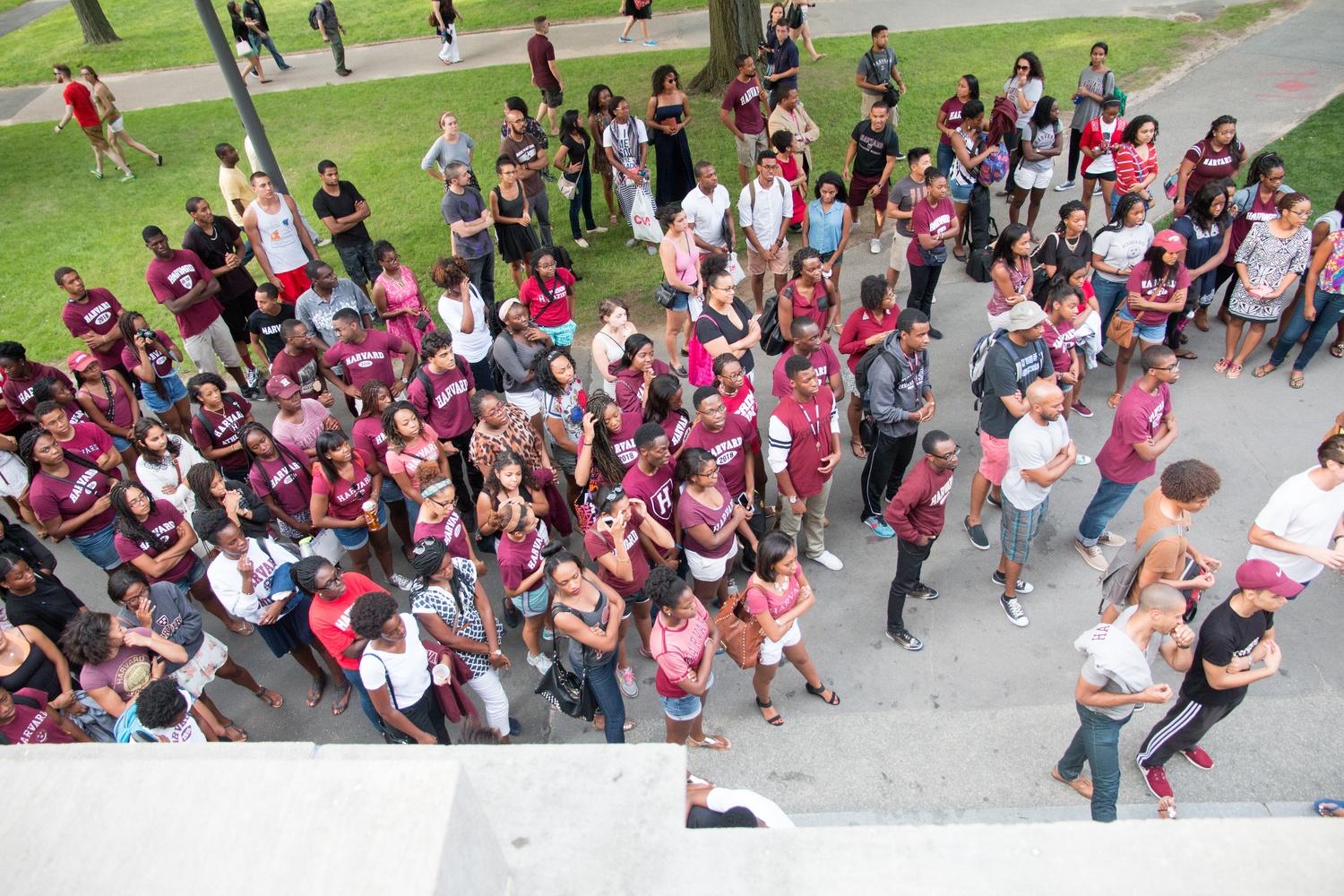 Nearly 200 black Harvard affiliates posed with their hands up for a group photograph on the steps of Widener Library earlier this fall evening in solidarity with Michael Brown, an unarmed black teenager killed in early August in Ferguson, Missouri. By George J Lok

“Harvard has a lot of power, politically, economically, socially—and so if we continue to benefit off of it, we might as well use it as a platform for people who don’t have that privilege,” Wigglesworth said.

Yet some students chose not to attend the rally.

Jaime A. Cobham ’17, brotherhood co-chair of the Black Men’s Forum, said that although he had attended several rallies to protest the death of black teenager Trayvon Martin, he no longer had the “emotional energy” to attend a rally.

“I don’t know if it’s going to change what people think, and I don’t know if anything will come out of it,” Cobson said, adding that he does not believe that rallies serve no purpose or that people should not organize or attend them.

Besides participating in the rally, Harvard community members gathered and engaged in conversations this week about the grand jury’s decision.

Memorial Church was open Tuesday afternoon so people could gather and “pray silently and think imaginatively in order that we might ultimately protest courageously,” according to a press release. In addition, race relations tutors in undergraduate Houses scheduled open discussions on the decision, and student groups and offices such as the Office of BGLTQ Student Life expressed sentiments of solidarity.

Both Wigglesworth and Cobson said that members of their groups, BSA and BMF, respectively, were upset by the decision.

According to Wigglesworth, BSA plans to release a statement responding to the decision in the coming days, and she said she anticipates the group will hold related events after Thanksgiving break. She said some group members have already chosen to boycott Black Friday to protest economic injustice against black communities or companies who she said supported the “prison-industrial complex”—all actions the BSA would advocate for.

Cobson said that while BMF has not finalized their response, it plans to take yet-unspecified actions to raise awareness on campus and provide a space for its members to process their feelings about the decision.

Wigglesworth added, however, that she hopes groups outside the black community would take action and reflect on the decision.

“This is everybody’s problem,” Wigglesworth said. “I hope this school realizes that this isn’t a black issue, and if you see only black people speaking on the issue, call on that, and question [that].”