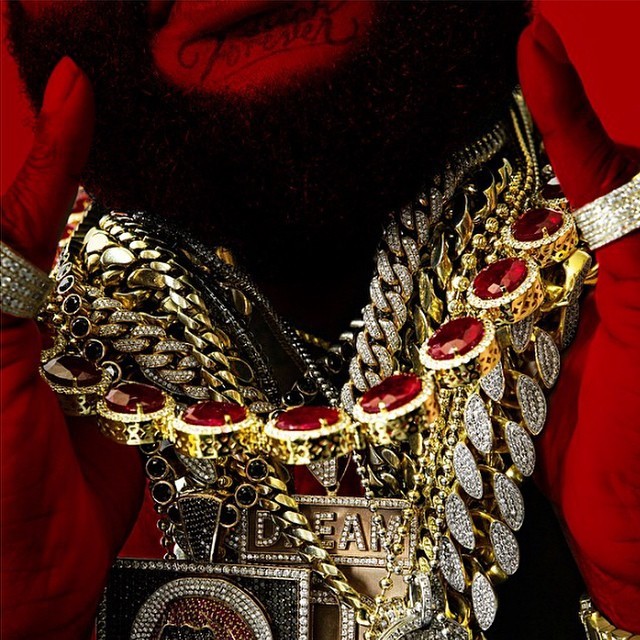 The opening of “Hood Billionaire,” Rick Ross’s newest album, is an imagined multi-million-dollar drug deal arranged via collect call from prison. “Intro,” this conversation-turned-opening-track, is an appropriate start to the album, since it’s about as clichéd and brazen as the rest of the material on “Hood Billionaire.”

The star-studded “Hood Billionaire” is Ross’s second album in a year, featuring collaborations with the likes of Jay-Z, R. Kelly, and Snoop Dogg. But despite its celebrity power, it seems too familiar, a dragging 16-track extension of Ross’s previous work. Rapping gangster platitudes over tired beats, Ross simply struggles to add something new to his repertoire.

“Mastermind,” Ross’ first album from 2014, was an hour-long gloat about drug money, bling, and women. In it, Ross solidified his gangsta character, but another hour of the same material on “Hood Billionaire” seems like overkill.

A rapper’s image is often dependent on street cred, from Lil Wayne’s arrests to Chief Keef’s gang affiliations. But Ross—whose real name is William Roberts and whose only time in prison was spent working as a correctional officer—has always had difficulty with building the believable criminal persona he wants to inhabit. He anticipates this challenge on the album: “Ross is a boss because real bosses don’t go to jail,” goes one line on “Movin’ Bass.” However, his insecurities over his sparse criminal past are evident in the hyperbolic and predictable lyrics of “Hood Billionaire.”

Take “Neighborhood Drug Dealer,” for example—perhaps the most blatantly straightforward track on the album. Ross triumphantly declares, “I’m your neighborhood drug dealer / it’s your neighborhood drug dealer” on repeat, as if he knows it will take a lot of work to convince us of his illicit profession. But Ross’s lack of subtlety is anything but convincing: he comes off like a newcomer to the game, loudly telling the world about his edgy and lucrative job.

This signature flagrancy is found throughout “Hood Billionaire,” notably on “Coke Like the ’80s,” the album’s third track. Unsurprisingly (for anyone who has seen the song’s title), Ross wants listeners to know he sells high-quality product reminiscent of cocaine’s golden age. Of course, in a pattern similar to “Neighborhood Drug Dealer,” the phrase “I’ve got coke like the ’80s” is stated innumerable times throughout the song. The track is brimming with overused stereotypes, from Ross bragging about his white Mercedes to describing how he eliminated anonymous business rivals.

Luckily, both “Neighborhood Drug Dealer” and “Coke Like the ’80s” are saved by a catchy, albeit standard, trap beat. “Neighborhood Drug Dealer” and “Hood Billionaire,” the album’s second track, are accentuated with deceptively attractive melodies, and it’s easy to find their refrains stuck in your head. These songs don’t put enough forward to become stand-alone hits, but may help the album achieve some commercial success. Unfortunately, the album’s catchiness dies with those three songs. Tracks like “Family Ties” are lacking in energy and variety, with dull lyrics placed over equally tedious, messy electronic beats.

But “Hood Billionaire” does hold a few surprises: in the midst of his gangster manifesto, Ross’s soft side occasionally peeks through. Lyrics like “I’m from a troubled home / one bedroom, didn’t have a telephone,” indicate an upsetting background to his ostentatious life. He even briefly delves into his romantic side on “If They Knew,” rapping, “I’m catchin’ feelings for her, she take away the pain.” These moments definitely don’t fit in with the tough-guy, drug-slinging persona he has tried so hard to construct, but they are passing seconds of relief that show William Roberts might be more nuanced than the Rick Ross gangsta caricature.

These honest moments are all too fleeting on “Hood Billionaire,” so what we’re left with is Rick Ross doing what he is best known for—gloating about luxury, claiming a life of crime, and constructing a clichéd persona that turns the album into disingenuous platitude and just doesn’t seem to capture the real William Roberts.