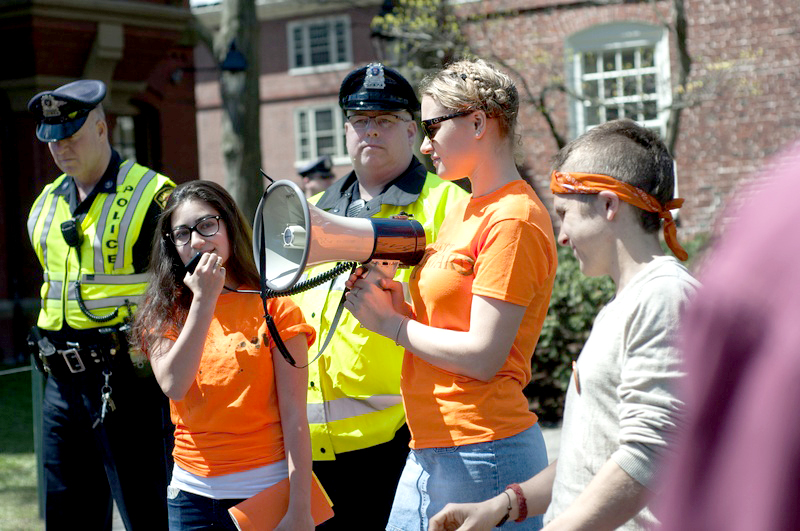 Members of Divest Harvard, including Brett A. Roche '15, far right, who was arrested during a protest two days prior, returned to Massachusetts Hall on May 2, 2014 to renew their call for an open meeting with the Harvard Corporation.
By Theodore R. Delwiche, Crimson Staff Writer

In the past two years, the push for Harvard to divest from fossil fuels has manifested itself in many forms—Valentine’s Day cards, a week-long fast, a blockade of Massachusetts Hall, and, most recently, a lawsuit. Now, one alumni club is joining the movement calling on the University to remove its holdings in fossil fuel companies.

The Harvard-Radcliffe Club of Vermont, which includes 276 members, endorsed divestment after 76 percent of its members who responded to a survey backed the measure. The Vermont group is the first alumni club to officially back the divestment movement, according to club president Charles A. Boright ’68.

The club’s position comes after months of discussion and research on the topic, Boright said. In early October, the club spoke with Jonathan Lash ’67, the president of Hampshire College, one of only a handful of colleges to have divested from fossil fuels. Boright also met with several members of Divest Harvard, the University-wide parent activist group, to discuss whether they would be supportive of the Vermont club voting on the measure, he said.

Benjamin Franta, a graduate student at the School of Engineering and Applied Sciences and one of Divest Harvard’s alumni coordinators, said he was immediately supportive of the Vermont group’s plans to debate and vote on the topic. Alumni are very relevant in the movement, he said.

Members of Divest Harvard, including Brett A. Roche '15, far right, who was arrested during a protest two days prior, returned to Massachusetts Hall on May 2, 2014 to renew their call for an open meeting with the Harvard Corporation. By Robert F Worley

“The clubs allow us to take that engagement to an institutional level, and that becomes harder for the Harvard Corporation to ignore,” Franta said. “I think the clubs have the potential to be extremely important, and we will do everything we can to help that happen.”

University President Drew G. Faust has repeatedly argued against divestment, maintaining that Harvard should not politicize its investment decisions. She weighed in on the issue in an Oct. 2013 open letter, characterizing divestment as neither “warranted or wise” and arguing that “the endowment is a resource, not an instrument to impel social or political change.”

University spokesperson Jeff Neal declined to comment on Faust’s engagement with alumni on the topic of divestment.

William E. McKibben ’82, the founder of environmental advocacy website 350.org and a former Crimson president, predicted that the coming year will see stronger support from alumni, given the recent decisions of other organizations, such as the Rockefeller Brothers Fund charity, to divest from fossil fuels.

“As the largest constituent of the university family, I think it's crucial that [alumni’s] voice be heard,” McKibben wrote in an email.

McKibben, who supports the Divest Harvard campaign, added that while he does not expect alumni club letters themselves to “set off many alarm bells in Massachusetts Hall,”—home to offices of Faust and other top officials in Harvard’s central administration—he thinks that alumni are perceptive of climate change issues and will continue to question the University’s continued investment in fossil fuel companies.