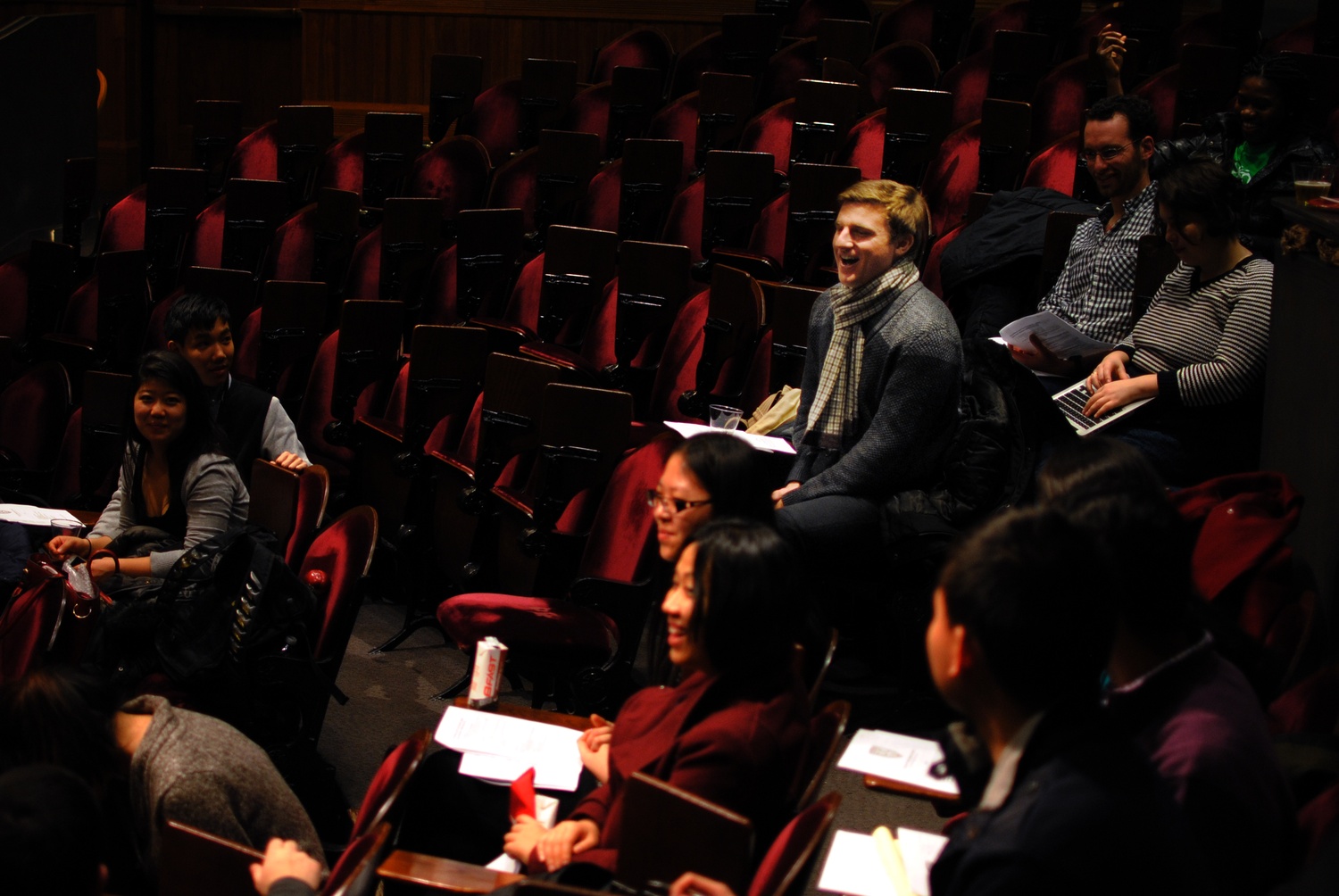 Quinn Hatoff '15, an inactive Crimson editor and one of the UC's newest members, introduces himself at his first UC meeting. Hatoff is one of multiple students elected to the UC during their Special Elections this semester. By Tiana A Abdulmassih
By Noah J. Delwiche, Crimson Staff Writer

Special elections are held every spring to fill positions vacated by representatives who resign or choose to leave for personal reasons.

This semester, the UC sought to fill twelve seats—three in Cabot House, two in Kirkland House, and one each in Oak Yard, Adams, Currier, Dunster, Eliot, Leverett, and Mather Houses.

Four students ran uncontested for the available spots in Adams, Kirkland, and Currier. No candidates submitted candidacy declarations in Leverett, Dunster, or Mather Houses and write-in votes were used to elect representatives to those seats, according to an internal UC document. 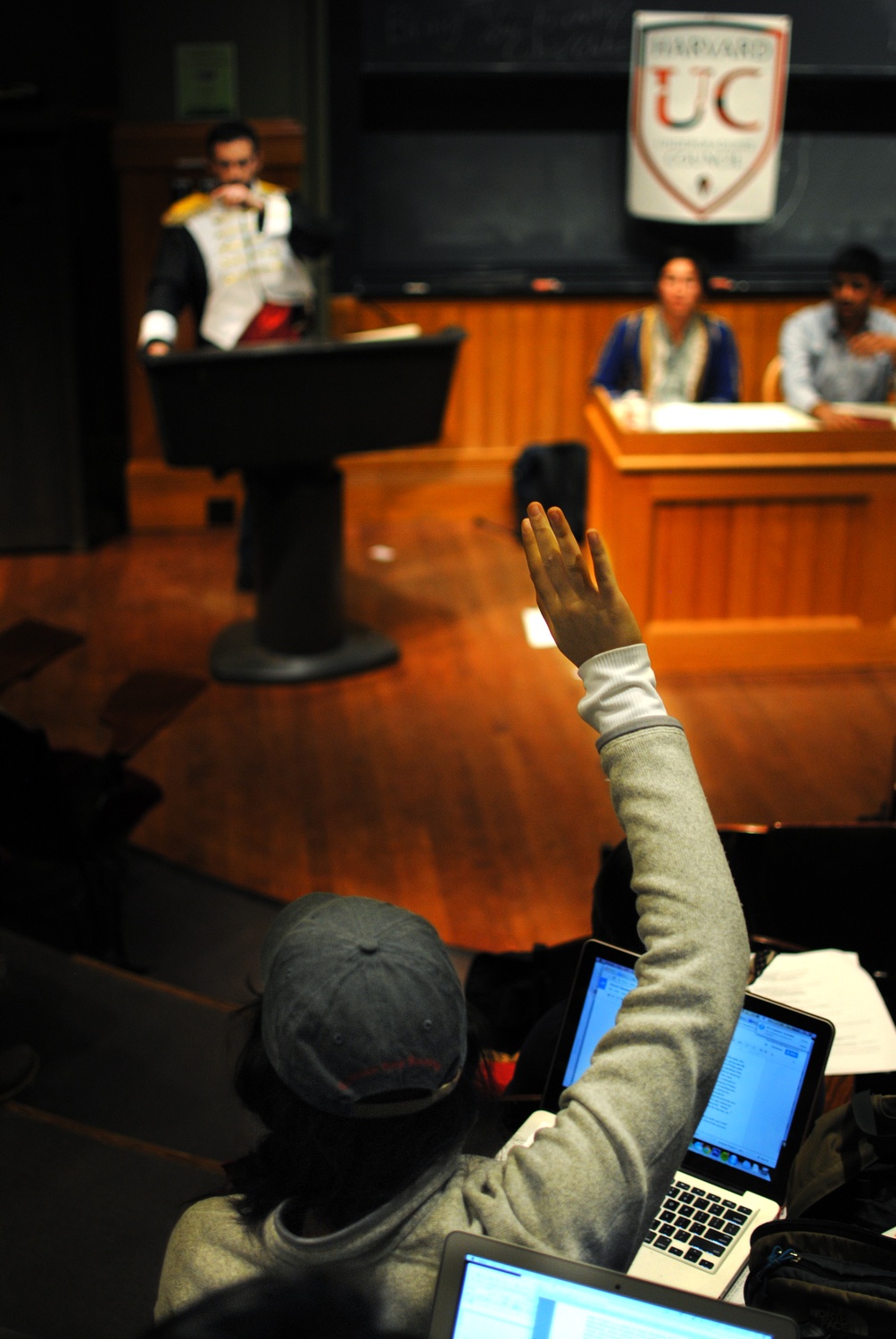 An audience member asks a question during the UC meeting on Feb 17. Besides introducing the new members from the most recent UC Special Elections, the meeting encouraged members to ask questions about the UC's new fundraising initiatives. By Tiana A Abdulmassih

The special election, similar to those in the past, drew significantly lower voter turnout and fewer candidates than ordinary elections held in the fall. Wesley K. Chen ’14, chair of the Election Commission, which independently manages UC elections, said in an interview Sunday that the total number of votes in any House or Yard did not exceed 100.

In the Leverett House election, two of the candidates running, Isaac G. Inkeles ’16 and Dana E. Katzenelson ’15, tied with seven votes apiece. Chen said that, after discussing the matter with UC leaders, the Council decided that a runoff election will be held later this week to decide the victor.

With 11 of the 12 empty positions filled, the UC began a renewed discussion of two recent issues that were brought before the Council again by various students.

Although not a UC representative, Matthew J. O'Connor '17 presented an amendment to the honor code draft approved by the Council last week. Although O'Connor supports forming an honor code, he called the current draft “a hollow and meaningless exercise in public relations.”

O'Connor objected to the affirmation component of the honor code, which would require students to sign a statement attesting to their honor on each assignment graded or turned in for review.

He suggested that students instead be required to individually meet with their professors at the beginning and end of each semester to attest that they will act and have acted honorably while completing their work.

Despite conversation among members of the UC, the amendment was not brought to a vote.

UC President Gus A. Mayopoulos '15 said in an interview after the meeting that he is not sure if O'Connor’s method is the best way to amend the draft and confirmed that a vote on the proposed amendment has not been scheduled.

“We support the creation of an honor code…however I think it’s still up for debate whether or not the UC thinks that a signature or a different medium [works best],” Mayopoulos said.

Brianna J. Suslovic '16 also spoke before the Council to explain why she felt gender-neutral housing, which was passed by referendum this fall, was important and how the UC might help.

Suslovic, who lives in a mixed-gender dorm in Winthrop House, said that the process of getting in a gender-neutral dorm room needs to be made simpler and more transparent.

“People don’t know necessarily know if their houses are or are not part of the pilot program,” Suslovic said.

The body did not vote on any specific legislation related to reforming gender-neutral housing procedures, but agreed to assist Suslovic in drafting legislation for the Council.

Afterwards, the UC approved legislation for spring semester grant submissions and elected Charles A. Scherr  '17 and Kate A. Buellesbach  '16 as social czars.

An earlier version of this article incorrectly stated the class year of newly elected Cabot House representative Tyler W. Creamer. In fact, Creamer is a member of the Class of 2016.