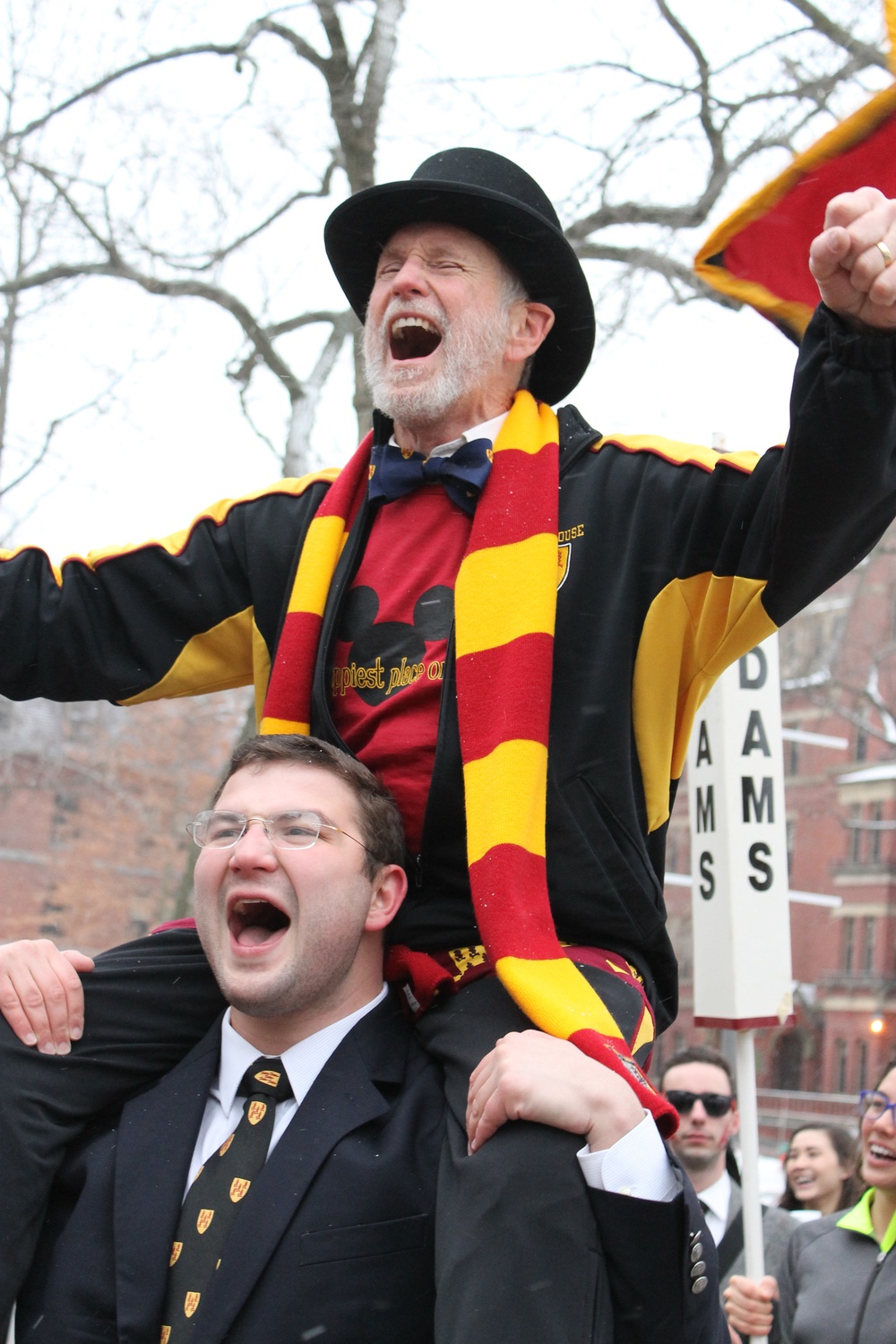 Adams House Master Sean Palfrey '67 celebrates Housing Day. Upperclassmen stormed Harvard Yard on Thursday morning to start off Housing Day festivities. The Class of 2017 received their housing assignments from their future housemates and visited their Houses during the evening to participate in festivities organized by the Houses. By Jennifer Y Yao
By Nikki D. Erlick and Brianna D. MacGregor, Crimson Staff Writers

Persistent snowfall and gusts of wind did not prevent upperclassmen from flocking to the Yard in full force to participate in Harvard’s annual Housing Day festivities Thursday morning.

Cabot House Committee Co-Chair Caroline R. Breinin ’15 said that, despite the Quad’s distance from the Yard, students from Cabot were not deterred by inclement weather.

“We were actually one of the first Houses there at 7:15 in the morning,” she said.

Alice F. Berenson ’16, who helped deliver letters for Mather, agreed that the weather did not stop people from celebrating Housing Day.

“I think that midterms did that more than the snow,” she said.

Although the snowstorm proved little obstacle for the morning’s letter deliveries, it did impact some of the afternoon’s festivities. While in past years House members have set up tables and banners on the lawn outside Memorial Hall, which sometimes included carnival games and petting zoos, students moved this year’s excitement indoors.

Over breakfast, freshmen expressed enthusiasm as the anxiety of the morning’s uncertainty transformed into burgeoning House pride. 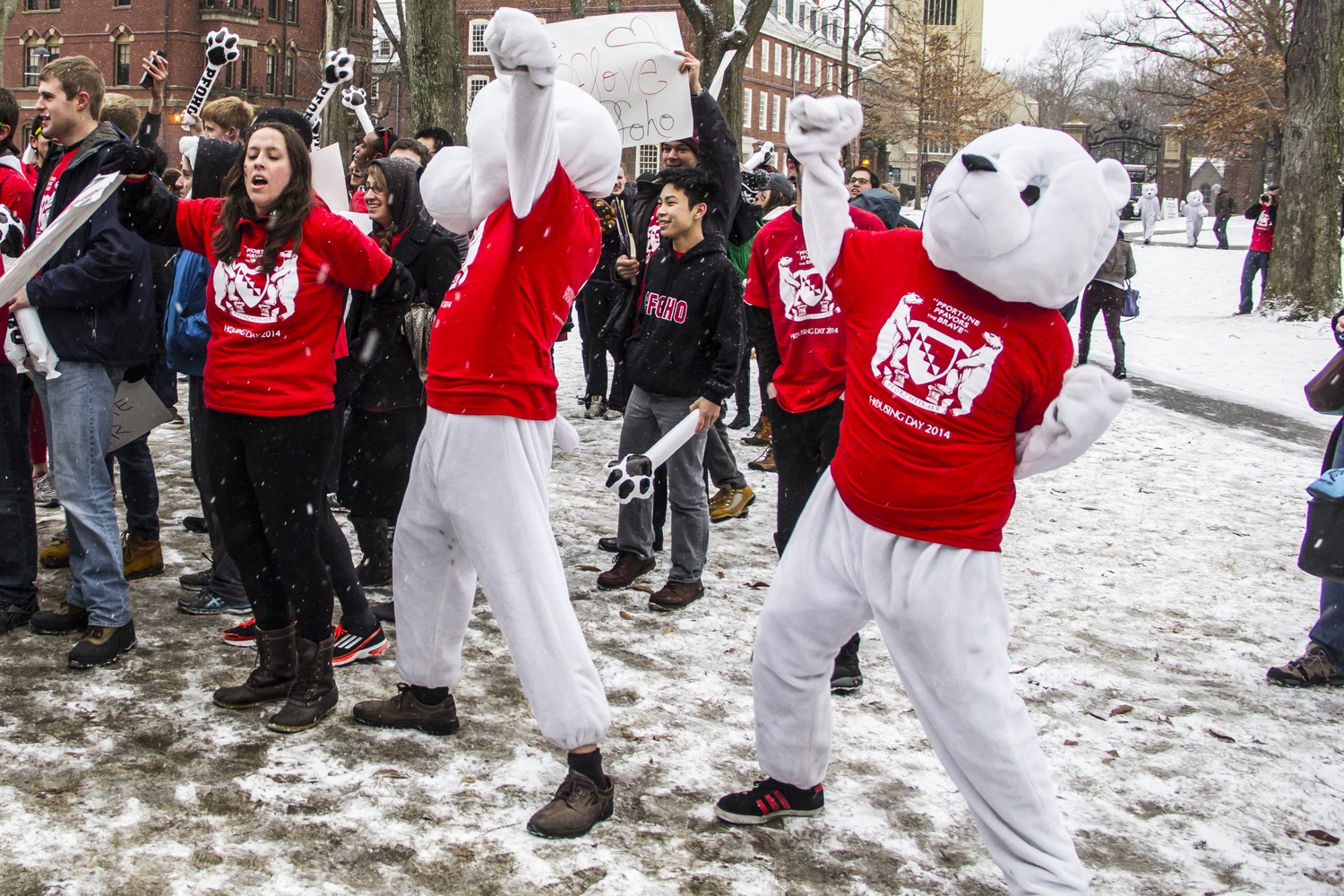 Upperclassmen storm Harvard Yard on Thursday morning to start off Housing Day festivities. The Class of 2017 received their housing assignments from their future housemates and visited their Houses during the evening to participate in festivities organized by the Houses. By Zorigoo Tugsbayar
Advertisement

Jacques van Ryhn ’17 and his seven blockmates were among the first freshmen to arrive in Annenberg after receiving their letter, which assigned them to Eliot House.

Van Ryhn described the morning as “nerve-wracking” and said that he and his blocking group had no idea what to expect, although they are pleased with their housing assignment.

“My roommate is also getting Eliot, and one of my really good friends also got in, so I’m super excited,” he said.

Sarah Tsou ’17 also said she was anxious while waiting for her housing letter.

“We were all in the room by 7:15 just waiting and watching the people start to stream into the Yard,” she said. “We were all so antsy. I couldn’t sit still—I was pacing across the room.”

Tsou and her six blockmates were assigned to Quincy House, and she said that they are thrilled.

Alexandra C. Tartaglia ’17 said that she and her five blockmates already feel like “energizer bunnies” after being assigned to Leverett House.

“We’re going to bring the spirit,” she said, adding that she and her blockmates felt welcome already.

Upperclassmen lined the entrance in Annenberg dining hall to welcome freshmen with music, cheers, and paraphernalia to represent their new Houses. Students said that Housing Day is a time for the entire House to come together and bond.

“It was the first time I have ever seen all of Mather united for one common cause, and it was classic Mather—we started with a party,” Berenson said. “We’ve been pumped since 6:15 in the morning.”

Breinin said that Housing Day is “one of the best days at Harvard” because of the House spirit and general excitement.

“I think one of the really great things is that everybody’s super happy for each other. It’s not really a competition among the Houses,” she said. “All the [HoCo] co-chairs are really supportive of each other, they just want to have the best experience possible for all the students who get in.”