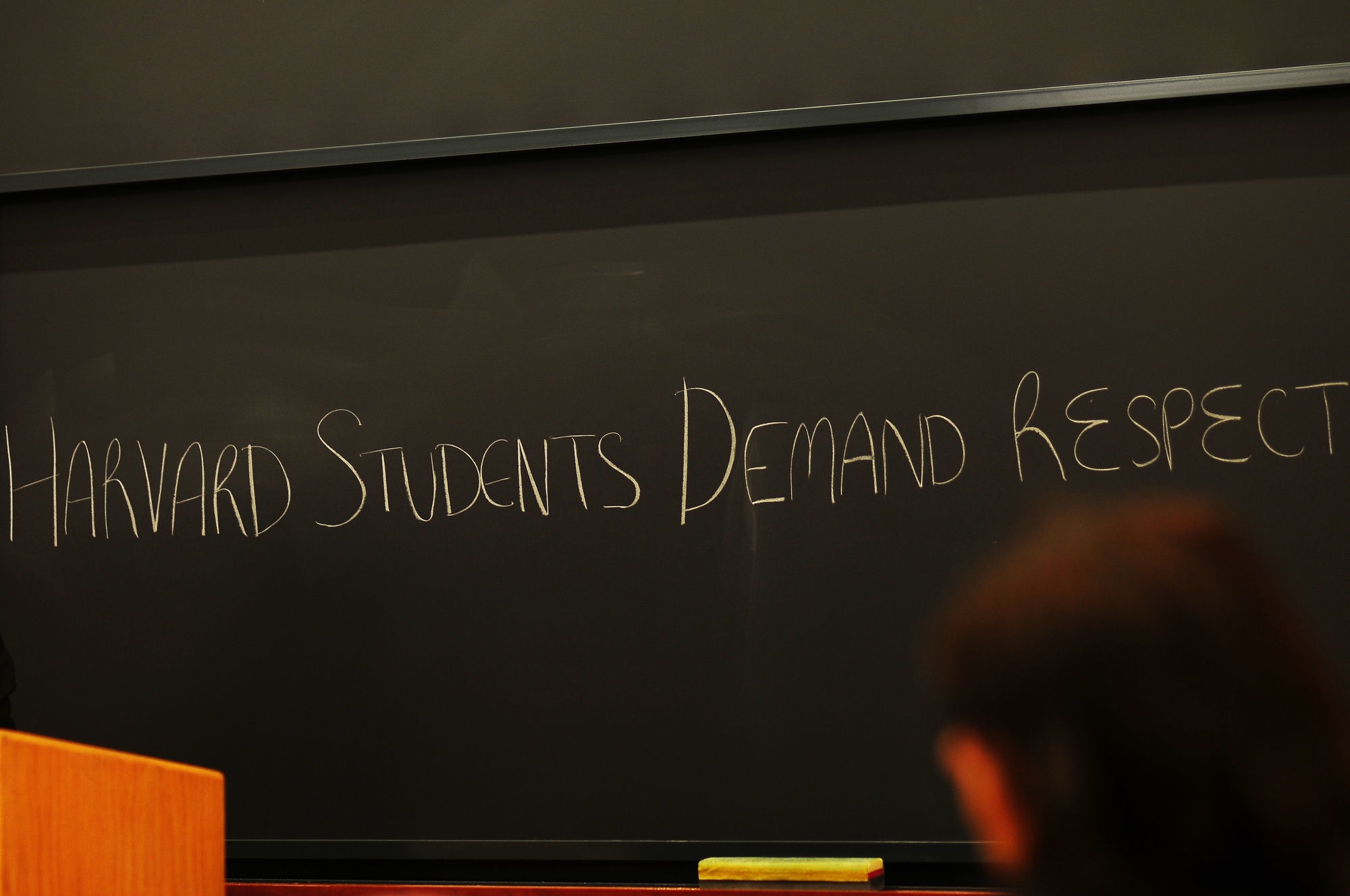 Members of the Harvard community came together with a graduate school coalition to discuss sexual assault on Tuesday evening.
By Quynh-Nhu Le and Joanna R. Schacter, Crimson Staff Writers

The meeting of the coalition, now entitled Harvard Students Demand Respect, was attended by students from six of the University’s graduate schools—the Kennedy School, the Law School, the Business School, the School of Public Health, the School of Education, and the Divinity School.

Although groups at individual graduate schools had previously worked to address sexual assault and gender discrimination on campus, the coalition was created recently and comes after an op-ed published by The Crimson earlier this month triggered campus-wide conversation on the issue of sexual assault.

Last week, University President Drew G. Faust announced that that Harvard has submitted a revised sexual assault policy, the product of a working group convened last year to ensure that Harvard’s policies align with federal Title IX regulations, for review by the Department of Education. If approved, the revised sexual assault policy will mark the first time all of the University’s schools must comply with the same set of regulations.

Michelle Maziar, an organizer for the coalition and graduate of the School of Education, said that she believed there had not previously been collective action on these issues because the graduate school communities are generally isolated from each other. She said this new group will allow for activists to centralize and enhance their efforts at reform.

“Graduate students are two-thirds of Harvard’s student population,” Maziar said. “We need to be involved.”

Still, Rory R. Gerberg, one of the coalition’s leaders and a student at the Kennedy School, said the two groups will be working closely together to advocate for adequate reform of Harvard’s sexual assault policy and to hold the University accountable for Title IX compliance.

“Our policy team will be looking at what [Our Harvard Can Do Better is] doing and how our work can complement theirs,” Gerberg said. Maziar added that she believes there is an “enormous void in responsibility and policy” in the way the administration handles and responds to sexual assault.

While the coalition expressed “cautious optimism” about the University’s recently submitted and revised policy, members still suggested that the coalition’s policy team continue to analyze current policies at the graduate schools, make recommendations for policy change, and propose accountability mechanisms to ensure implementation and compliance.

“Even though [the revised policy] has been submitted, we still need to put pressure on the administration to make sure this happens, and is just, and has what we want,” Maziar said. She said that she thought that the administration has thus far not adequately involved graduate students in its efforts to address sexual assault on campus, having included only one graduate student on its task force.

In addition to analyzing policy, the coalition seeks to launch an education campaign across the graduate schools and to increase public awareness of issues at Harvard. Liaisons have been appointed to facilitate communication between school administrators and Title IX coordinators.

“This is a really exciting time, and I think we’re going to see a lot of change,” Maziar said.

An earlier version of this article incorrectly attributed a quotation characterizing administrators' handling of and response to sexual assault as an “enormous void in responsibility and policy.” In fact, the comment was made by Michelle Maziar.