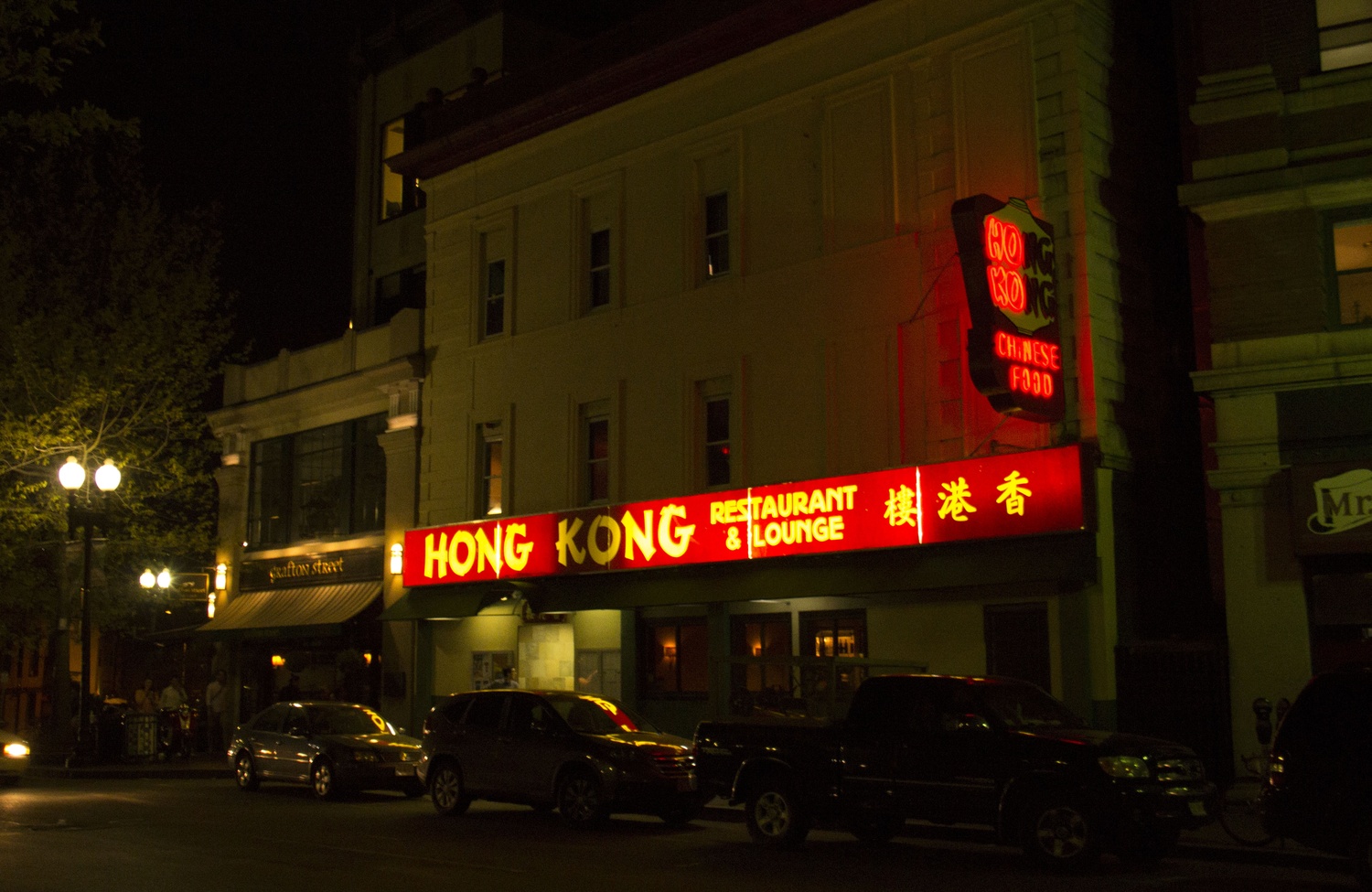 Even as the Extension School Cultural Studies Club dropped its sponsorship of the event, members of the Satanic Temple held what appeared to be a black mass ceremony at the Hong Kong restaurant and lounge Monday night. By Madeline R. Lear
By Theodore R. Delwiche and Alexander H. Patel, Crimson Staff Writers

Although the Harvard Extension School Cultural Studies Club dropped its sponsorship of a reenactment of a satanic “black mass” ritual earlier in the night, members of the New York-based Satanic Temple gathered for what appeared to be a black mass on the second floor of the Hong Kong restaurant and lounge shortly after 10 p.m. Monday.

About 50 people, mostly dressed in black and some wearing face makeup, were present for the ceremony. A consecrated host, believed by Catholics to be the body of Christ, was not used in the ritual.

Four individuals in hoods and one man in a white suit, a cape, and a horned mask were active in the proceedings, as well as a woman revealed to be wearing only lingerie. The ceremony began with a narration on the history underlying Satanism and the black mass ritual.

The restaurant’s owner, Paul Lee, said in a phone interview around 11 p.m. that he was unaware of the incident. The Hong Kong is located on Massachusetts Avenue, directly across the street from Harvard Yard.

The ritual came after the cancellation of a black mass reenactment organized by the Harvard Extension School Cultural Studies Club, which had the event scheduled for Monday evening in Cambridge Queen’s Head Pub in Memorial Hall. Shortly before the planned starting time, the club said that it was moving to an off-campus site, citing in an email that “misinterpretations about the nature of the event were harming perceptions about Harvard and adversely impacting the student community.”

The club wrote in its email around 5 p.m. that they planned for the event to be held at The Middle East nightclub in Central Square at 9 p.m. But Clay S. Fernald, the general manager of The Middle East, said Monday evening that the nightclub would not host the event, and that negotiations with the Harvard Extension Cultural Studies Club had fallen through.

Fernald declined to comment on why negotiations had ended.

Around 7 p.m., the Cultural Studies Club sent an email saying that they had been unable to find another location and would no longer sponsor the black mass, and individuals who intended to attend decided to migrate to the Hong Kong, at which the ceremony was revived.

Satanic Temple spokesperson Lucien Greaves said in an interview with The Crimson earlier in the afternoon that although the Cultural Studies Club cancelled the event, he still hoped to host a black mass in the future.

After learning of the event that occurred at Hong Kong,  Terrence Donilon, secretary of communications for the Archdiocese of Boston, said in an interview around 11:00 p.m. that the Diocese's position is the same. He said the event is disgraceful and despicable.

The Archdiocese followed through with its plans to host a Eucharistic procession to St. Paul Church, where a “holy hour” will be conducted. Donilon said that he was grateful for the community presence at the event and the presence of  University President Drew G. Faust.

The club emphasized in the 5 p.m. email that Harvard had not asked them to move the event from its previous location, the Cambridge Queen’s Head Pub in the basement of Memorial Hall, and commended the University for affirming its members’ rights to free speech and assembly.

“Harvard always demonstrated that it understood its responsibility to defend protected student speech. That was always made clear to us,” the club wrote in a second email.

Extension School Dean of Students and Alumni Affairs Robert H. Neugeboren '83 also said in a statement after the relocation announcement but before the postponement that the Extension School “is grateful the student group has recognized the strong concerns expressed by members of the Harvard community and beyond.” 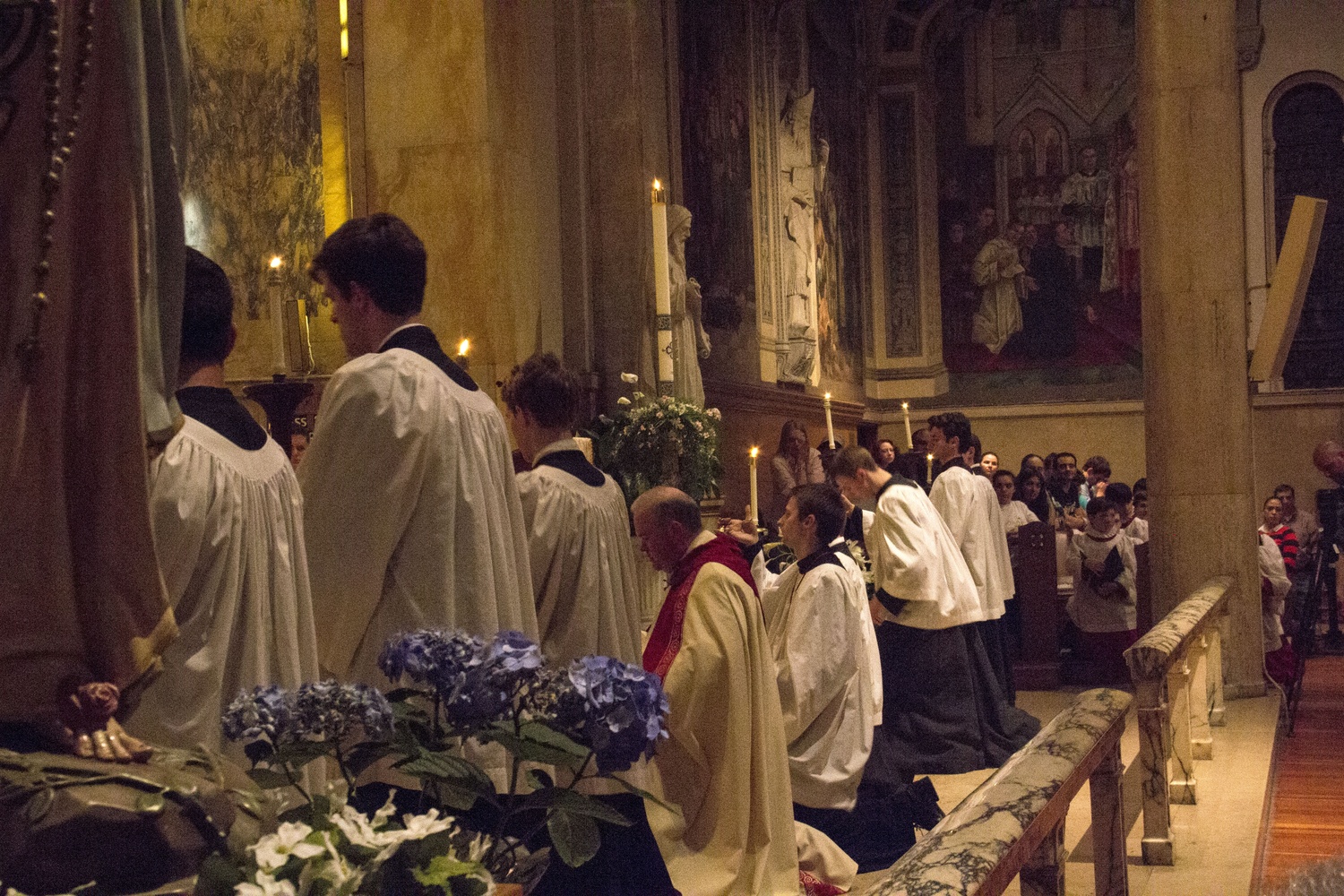 Hundreds gather in St. Paul Catholic Church for a holy hour Monday night in response to a planned reenactment of a Satanic black mass. By Madeline R. Lear

The proposed reenactment had received sharp condemnation by the Archdiocese of Boston, the Harvard Chaplains, a group of religious and spiritual leaders on campus, and several student groups.

In a statement released online on Monday, Faust affirmed the University’s commitment to free expression, noting that the club would be afforded the decision to proceed with the re-enactment, although she did deplore the event as offensive.

The Cultural Studies Club still said it was dismayed by harsh and widespread criticism of the event.

“While it is unfortunate that many people took personal offense at rituals for which they have little or no understanding of their context, what we find most disturbing have been the demands that the rituals and beliefs of marginalized members of society be silenced,” the club wrote in the emailed statement. “It is gravely upsetting to us that some people feel vindicated on the basis that they have disingenuously mischaracterized our invited guests as being part of a hate group.”