With many carrying crosses and singing the words “Jesus, I adore you,” several hundred Catholics, Christians, and other supporters from across the Harvard and greater Boston area processed from MIT to The Church of St. Paul in Harvard Square Monday night in protest of a planned reenactment of a satanic black mass ritual.

The procession culminated in a holy hour of prayer, readings from scripture, and hymns in Harvard’s Catholic Church affiliate, where the crowd spilled out onto the sidewalk.

Around the same time, across campus, about 70 demonstrators from the Catholic Action League of Massachusetts and several members of the American Society for the Defense of Tradition, Family, and Property protested outside Memorial Hall, where the black mass, which parodies the Catholic mass, was originally scheduled to be held.

Around 5 p.m., the Extension School Cultural Studies Club, the sponsor of the black mass, wrote in an email that it had decided to relocate and, at 7 p.m., the club announced it was calling off the reenactment. A scaled-back black mass reenactment was eventually held around 11:00 p.m. by the New York-based Satanic Temple in Hong Kong Restaurant and Lounge.

Even as they thought the black mass was cancelled, members of the Christian community continued with plans to come together in opposition to the event.

Christina M. Giordano ’10 said that she attended the rally because Catholics “needed to make a strong showing.” “We need to be proud of our faith,” she added. 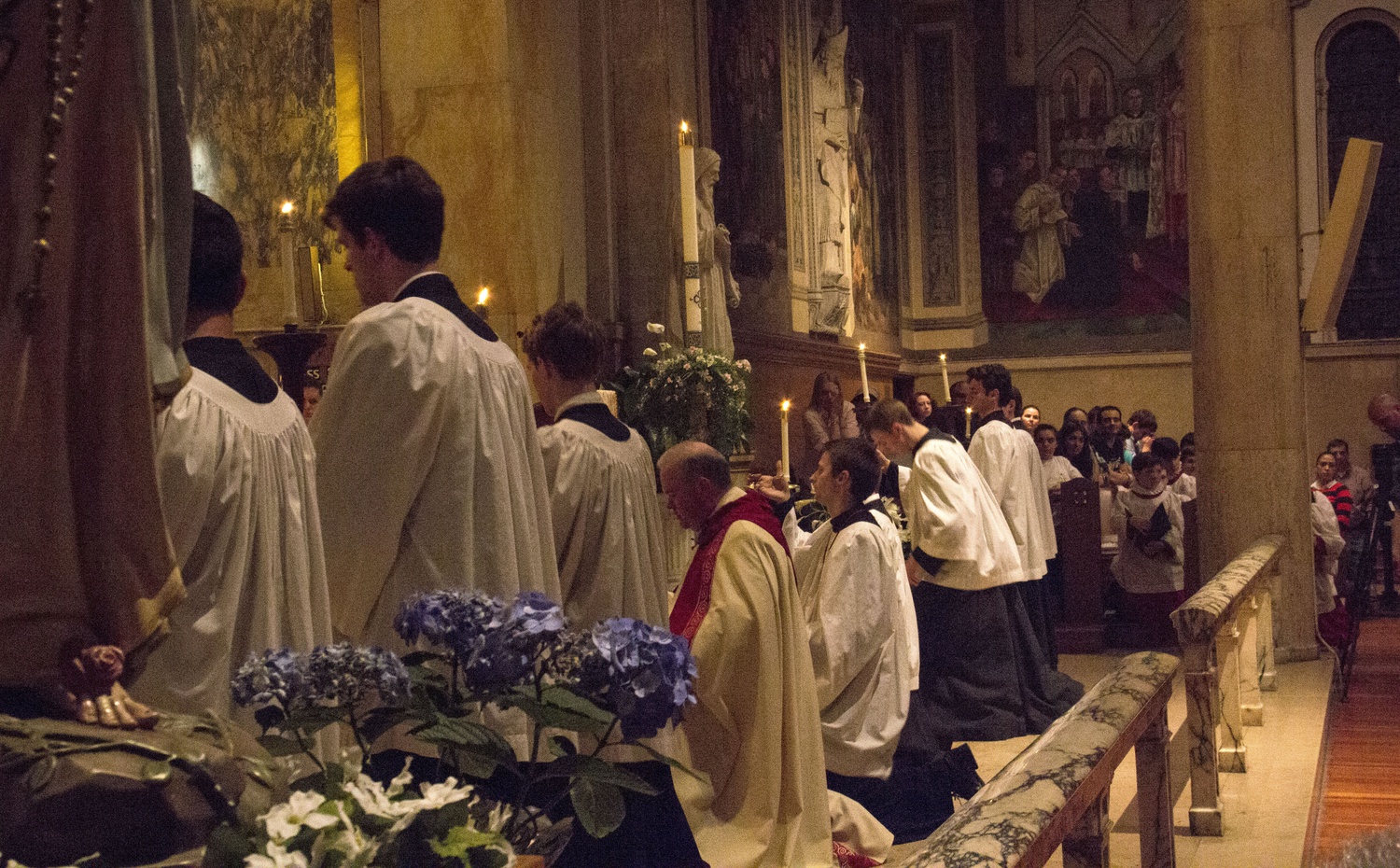 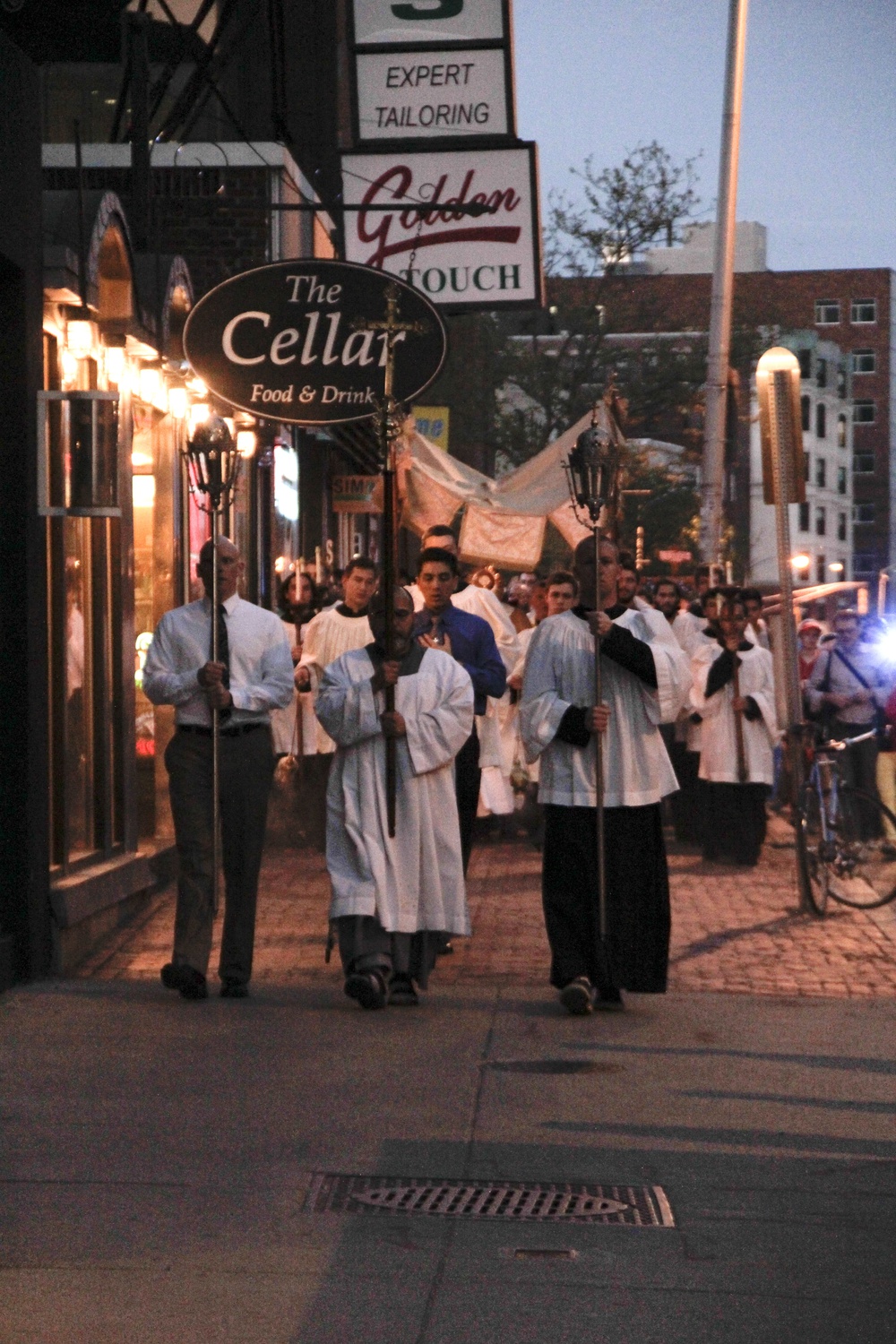 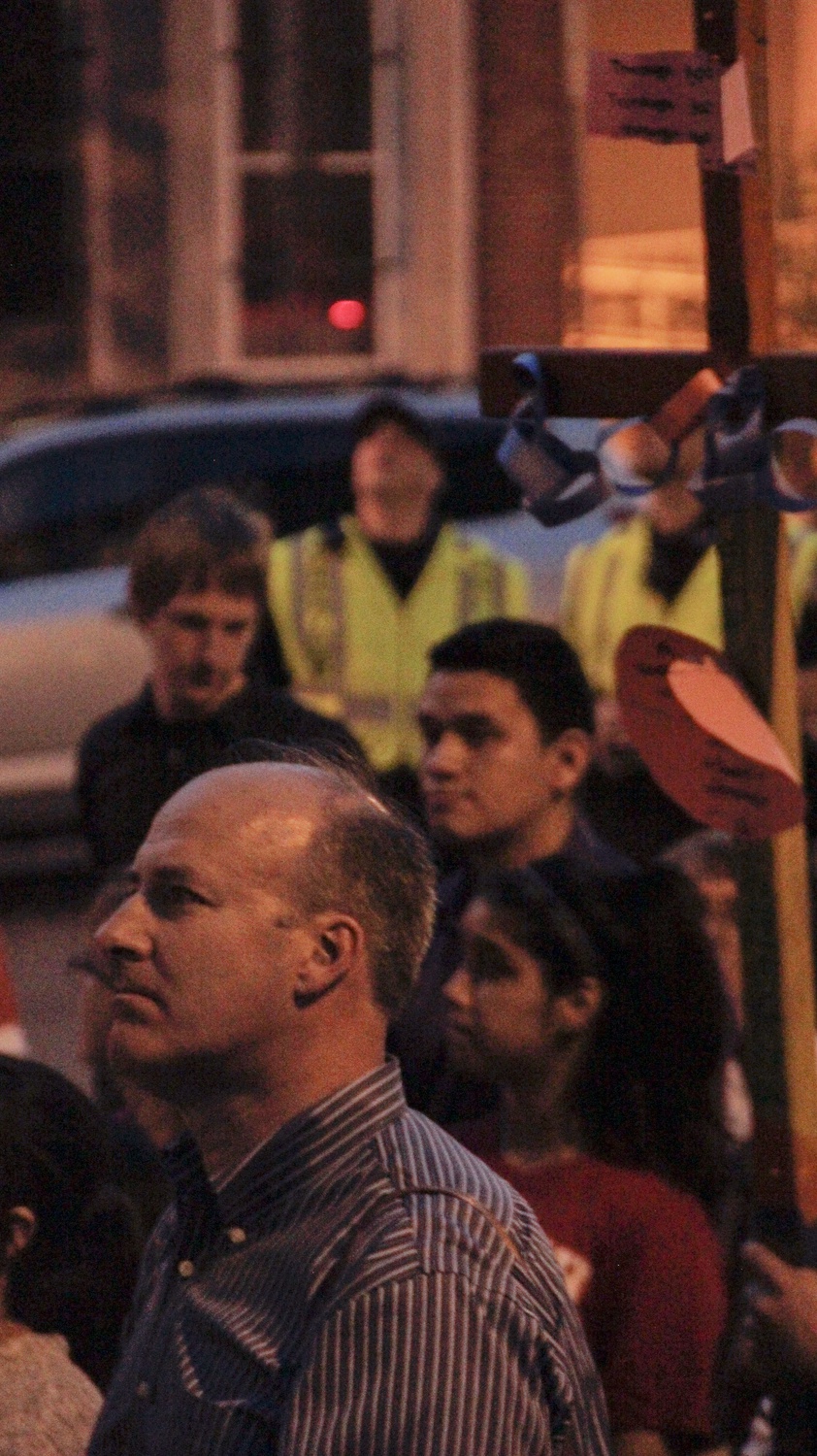 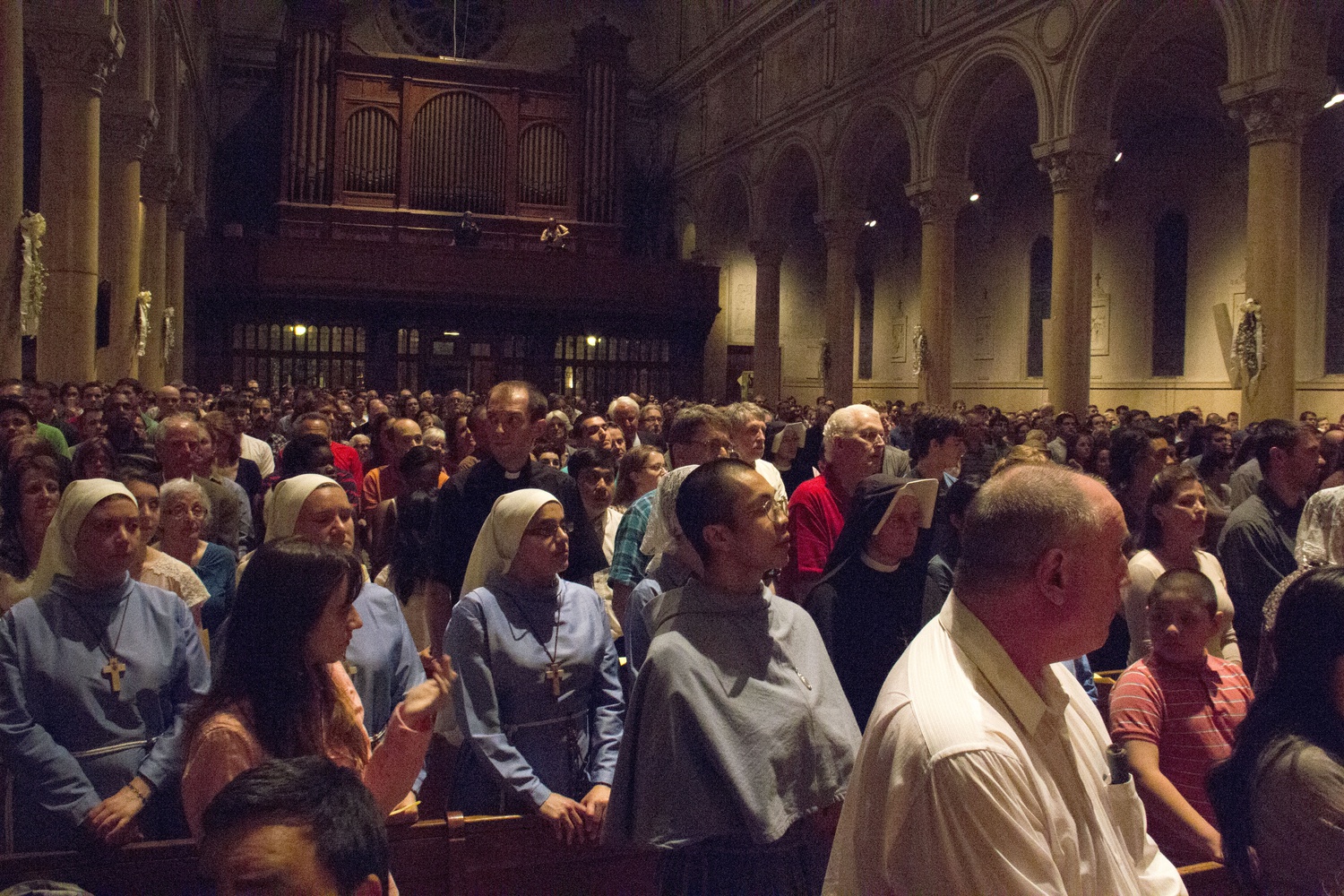 The Pew - People stand during a service in St. Paul Church held in response to a planned Black Mass on May 12, 2014. 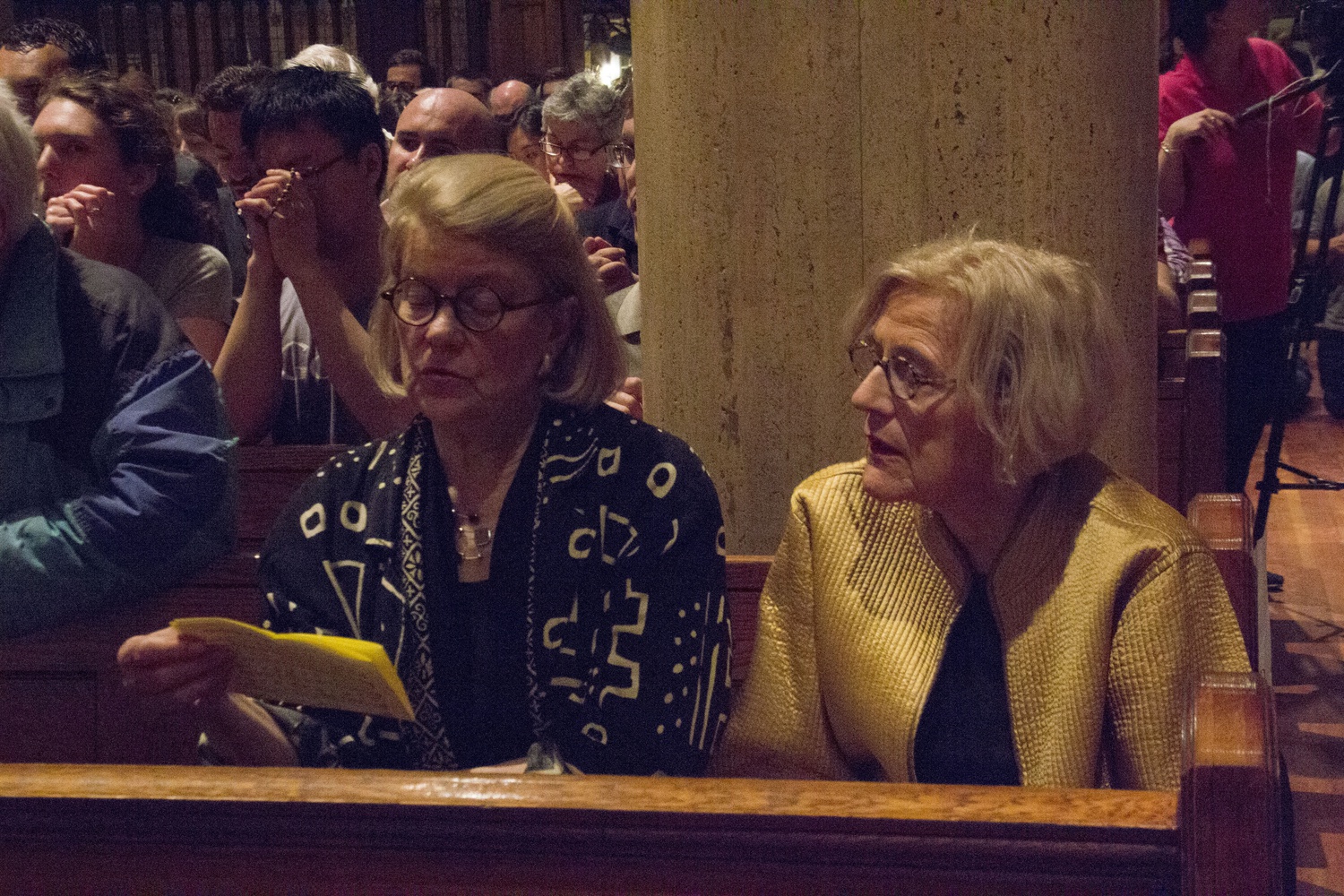 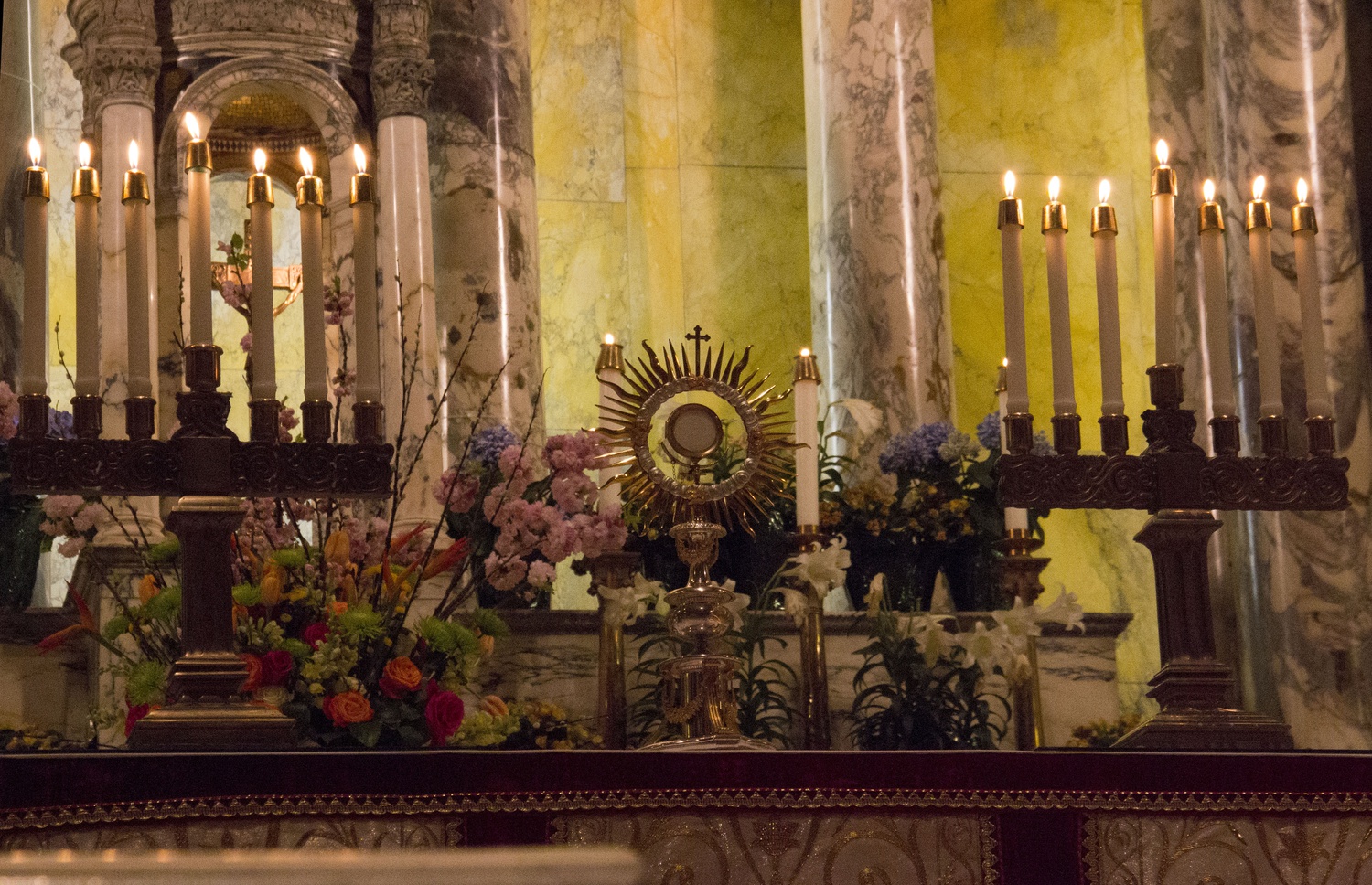 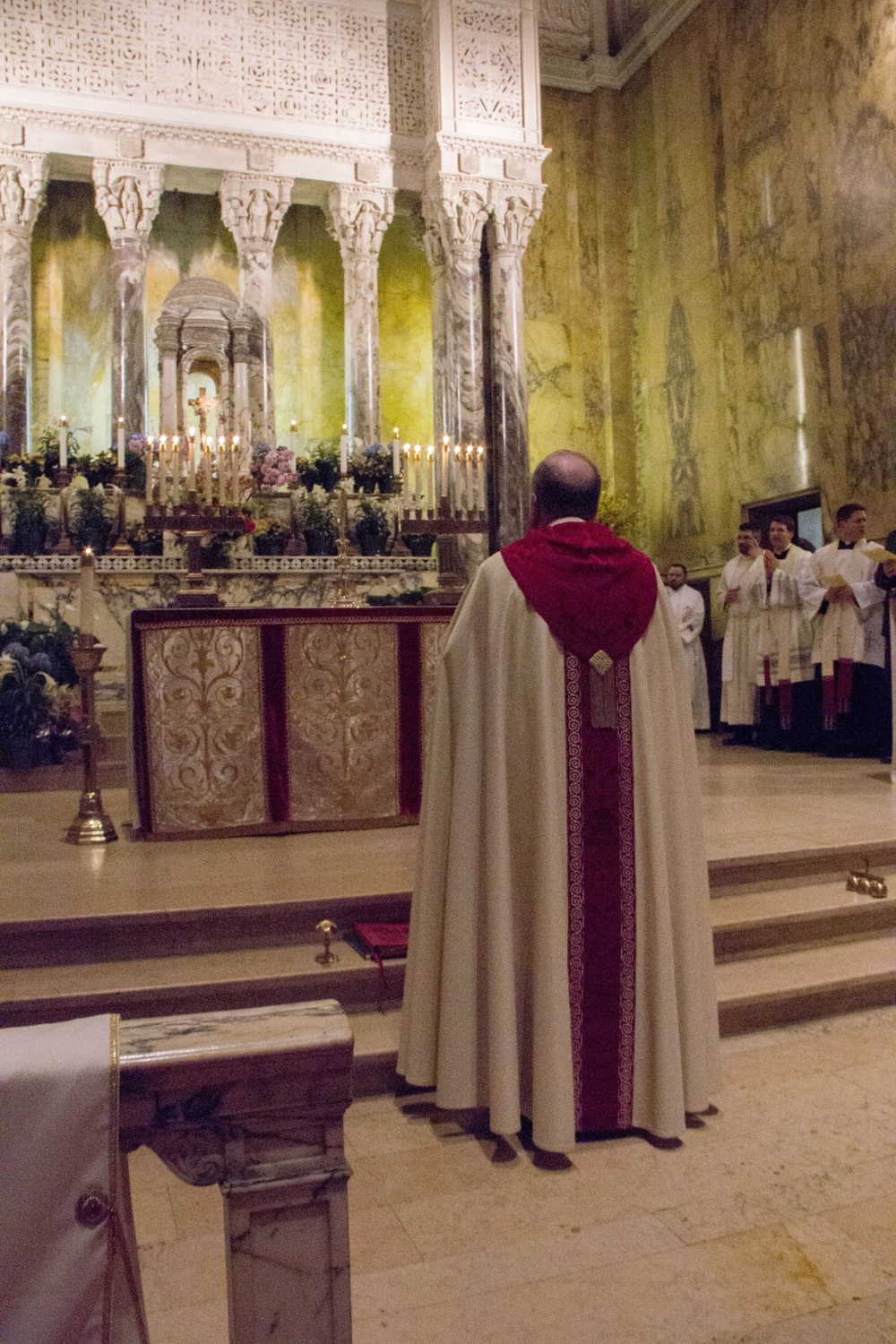 Reverend Drea - Michael E. Drea, the reverend and senior chaplain at St. Paul, stands during Holy Hour on May 14, 2014. 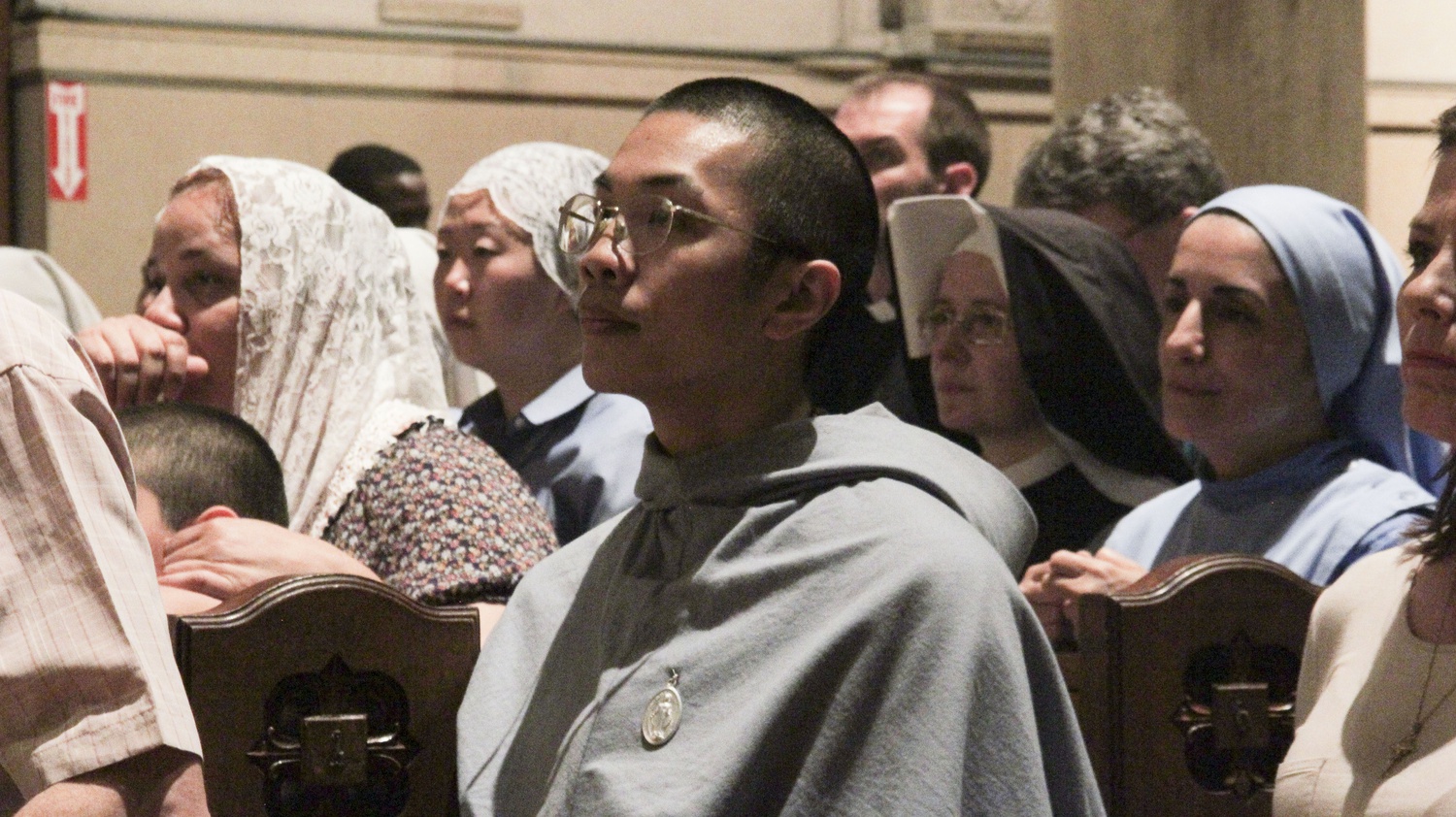 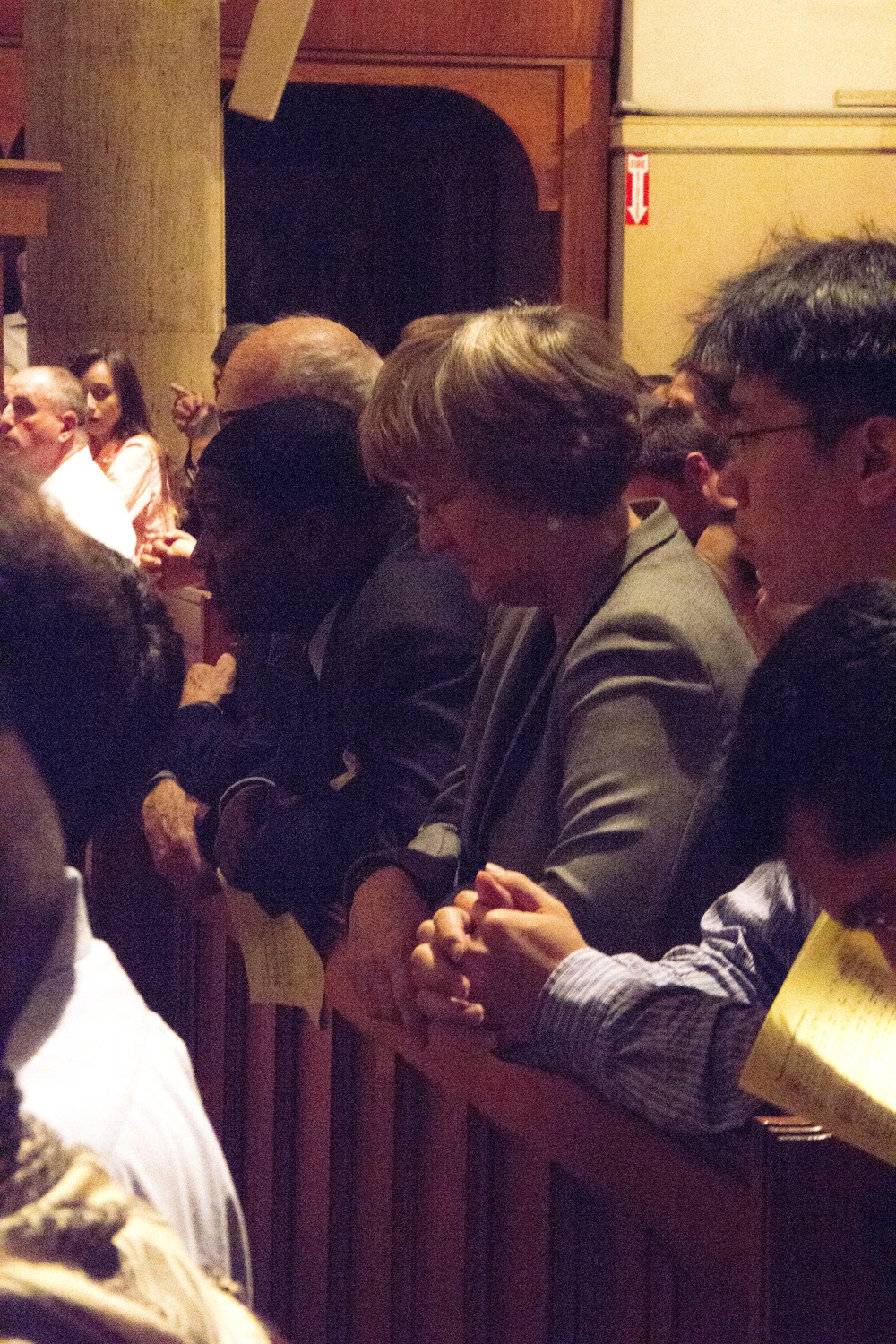 Faust at Holy Hour - University President Drew G. Faust bows her head during a holy hour Monday night at St. Paul Catholic Church in Harvard Square. The event was held in opposition to a reenactment of a Satanic black mass being organized by a Harvard extension School student group. 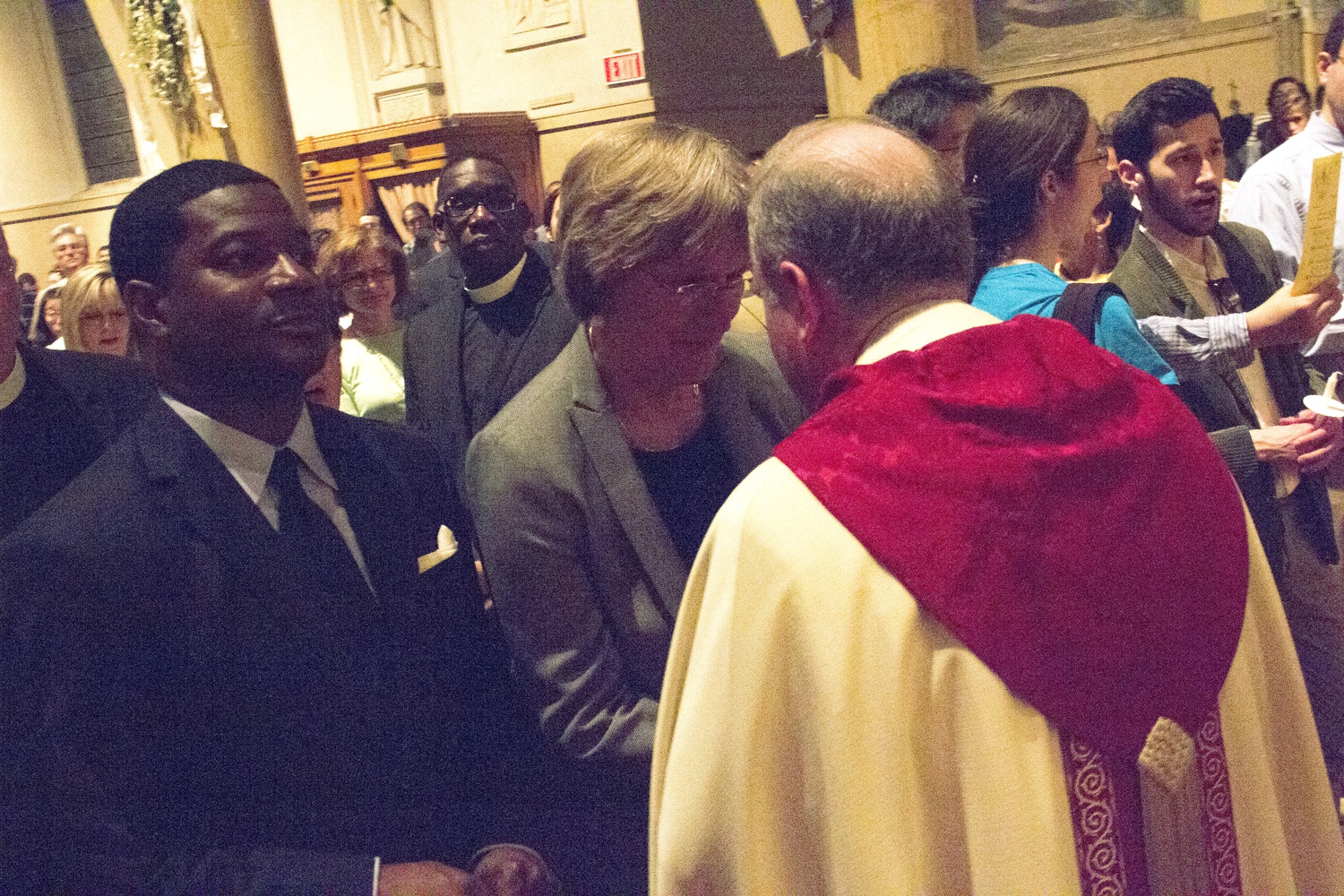 “This is essentially the best response we could have asked for as a diocese,” said Catholic Students Association president Todd E. Jones ’16 said of the rally. Like others, he criticized the planned black mass,  but emphasized the power of the community response to it. A petition organized by Matthew R. Menendez ’14 had garnered over 450 signatures of students and alumni by presstime Saturday.

“This [satanic mass] has no positive cultural substance,” Jones added.

Seats in St. Paul, which sits at the intersection of Bow and Arrow streets, were quickly filled as the crowd reached the church and the prayer service began. Among those in attendance were University President Drew G. Faust, Reverend Jonathan L. Walton, Pusey Minister in Memorial Church and Plummer Professor of Christian Morals, as well as clergy and laymen from around the Boston area.

Michael E. Drea, the pastor and senior chaplain at St. Paul, delivered a sermon emphasizing the importance of Catholic beliefs and responded directly to the planned black mass, which he described “as an act of hatred and ridicule toward the Catholic church and the faithful.”

Drea concluded his remarks by telling the crowd, “as we depart from this church into the light of Harvard Square...may we be reminded of our call to bring the presence of the living God into the world…. That’s the call of veritas.”

Those who attended the service spoke highly of its ability to bring together people of different beliefs and from across the area.

“I was just amazed at how many people even within and outside the Harvard community came together to just like acknowledge and celebrate the beauty of what Catholics hold very dear,” Chisom M. Okpala ’15 said.

Fr. Felipe Gonzalez from Boston’s Cathedral of the Holy Cross said he was “amazed” by the number of people who attended the service. Rebecca E. Tweedie ’14 said that she had “never seen [the church] so full.”

“It was the response we were hoping for,” Gonzalez added. “This is the sense of the community that we all are waiting for.”

Back across the Yard, dozens of protesters gathered outside Memorial Hall offered more direct protestation of the the planned satanic mass.

“We’re just delighted to learn that, first of all, [the event] was taken off of campus, and, second of all, that it was cancelled altogether,” said C.J. Doyle, executive director of the Catholic Action League of Massachusetts. “This had no redeeming social value, it had no intrinsic educational value, this was not a cultural event: this was an exercise in hatred, bigotry, desecration, and denigration.”

—Staff writer Alexander H. Patel contributed to the reporting of this article.

An earlier version of this article incorrectly quoted Catholic Students Association President Todd E. Jones ’16 in talking about the value of the planned satanic mass. Jones said that “This [satanic mass] has no positive cultural substance.”