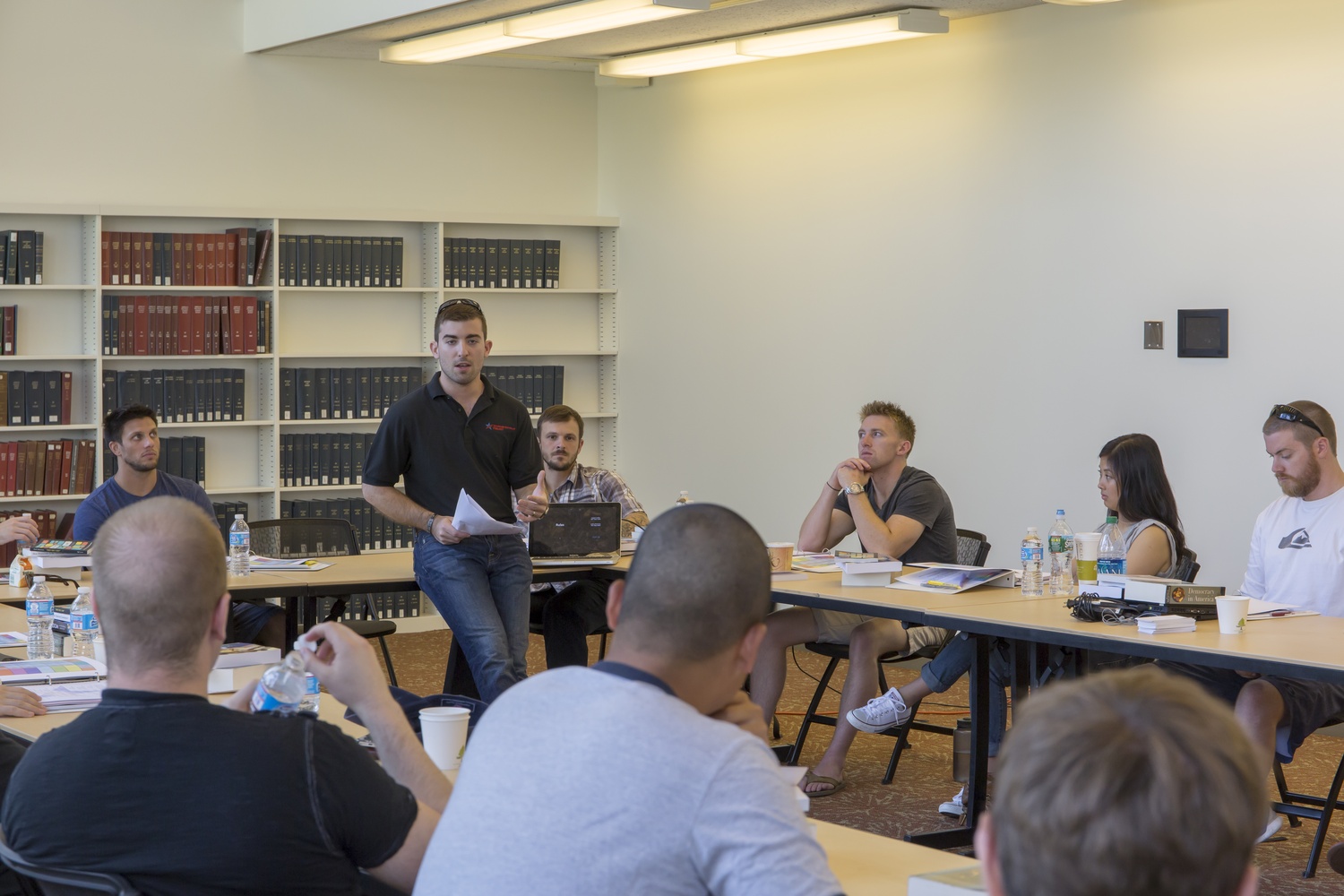 Fourteen students sat around tables arranged in a circle, covered in papers, notebooks, coffee cups, and copies of Alexis de Tocqueville’s “Democracy in America.” To the outsider’s eye, they looked just like students in any other Harvard seminar. Only these students shared a differnt kind of connection—all were either former or current members of the U.S. military.

The veterans were on campus for the inaugural year of the Warrior-Scholar Project, a one-week intensive pilot program—next year’s program will likely be two weeks—designed to help military veterans transition from the battlefield to the classroom and beyond.

The program, which began at Yale in 2010 but has since expanded to Harvard and the University of Michigan, is funded by donations and grants from the National Endowment for the Humanities and other organizations. With the funding and significant help from Harvard Law School, participants, who are all veterans, shoulder only the cost of transportation to and from the program. The program is not limited to Harvard-affiliated students.

Through studying the works of Tocqueville and Thucydides, attending writing workshops, and interacting with top professors, the program aims to help veterans transition to and excel in college and beyond said Logan Leslie ’16, program director of the Warrior-Scholar Project at Harvard and a former Green Beret.

A NEW TYPE OF EDUCATION

The military portrays education as “vocational training,” but, Leslie said, this mindset can prevent many veterans from getting the most out of college after leaving the military.

Aside from learning the critical thinking and writing skills necessary to perform well in college, the veterans also are taught to make the most of university resources and professors so that they can become a part of the college communities they enter.

“A lot of vets might graduate and they might resume block, but they may not contribute to the community or get out of school what they could have,” Leslie said. “We need to get them past this idea that ‘because I’m not getting a job directly related to this, I shouldn’t put time into this.’”

During the program, which ran from July 7 to 12, Harvard professors helped the veterans dissect the classic works of Tocqueville and Thucydides around the theme of “democracy and citizenship.”

With about 150 applicants and only 15 spots, competition for a place at the conference was tough, but the selection process was “need-based” not “merit-based,” according to Leslie. The selection committee picked veterans who would gain the most from the program.

“My number one takeaway was about the value of the classics,” said Jared Smith, 23, who served four tours of duty in Afghanistan during his five years in the Army. “It wasn’t until I read Pericles that I realized that this was incredibly applicable to real life.”

Smith, who enlisted after high school was discharged from the Army this month, will enter the University of Oregon this fall. After his week at the Warrior-Scholar Project, Smith is considering studying French or Greek in college.

Sang Bumra, another attendee, is currently stationed at Ft. Myer, Virginia, but will be enrolling in Columbia’s School of General Studies this fall. Bumra, 27, had previously enrolled at Santa Monica Community College and Northern Virginia Community College for classes. For Sang, the program will help prepare him for the rigor of an Ivy League education.

Bumra called the course a “short course with long days” and said that the program helped him with his “reading, writing and reasoning skills.”

The Warrior-Scholar Project seems not to have had any problem recruiting well-known professors to guest lecture and mentor students. During the week, University President Drew G. Faust, Government professor Harvey C. Mansfield Jr. ’53, and Kennedy School professor David R. Gergen all made appearances, among others..

“It’s too easy,” to get professors to help out, said Leslie, who noted that professors were willing to fly in just to speak to veterans.

Faust, who reinstated Harvard’s ROTC program in 2010, has made an effort to strengthen ties between Harvard and the military. In a speech to participants in the Warrior-Scholar program, she urged them to pursue education while holding onto their experiences from the military.

“You have such important messages and lessons to bring to our communities in your role as warrior-scholars,” Faust said in her prepared remarks to the program. “I hope that as you become scholars, you don’t entirely abandon your role and your experiences as warriors, but that you bring the richness of that experience to the communities which you will be entering.” 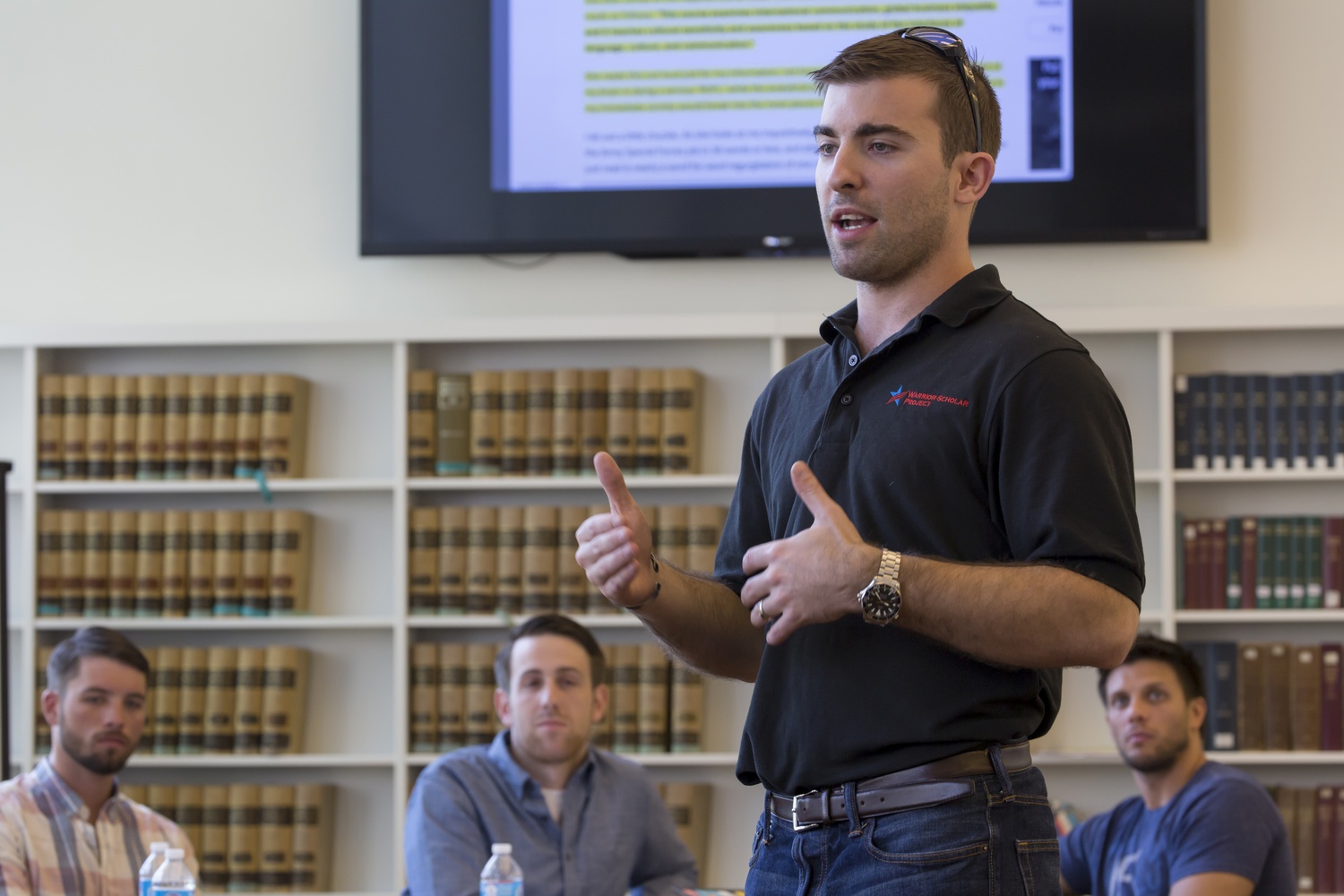 Logan Leslie ’16, program director of the Warrior-Scholar Project at Harvard and a former Green Beret, is pictured. By Courtesy of Freddie Reed

Mansfield, an Army veteran, dissected Tocqueville’s “Democracy in America” with the students and noted that the veterans brought a different perspective and “proven character” to the table.

“These students have an advantage compared to Harvard students,” Mansfield said. “They are willing to sacrifice their lives—they have been serious about something.”

Indeed, many professors found the veterans to bring different, real-world perspectives into the classroom. interesting insights and unique perspectives. Government professor Eric M. Nelson ’99, who led a seminar on “the concept of democracy,” called the veterans “remarkably clever.”

“It’s very rare that we get the opportunity to offer thanks and provide help to our veterans,” Nelson said. “It was really an honor to find myself in their company.”

Gergen, a Navy veteran, spoke with participants about their potential for leadership within academic settings, and changes in the role of veterans within greater society. He also praised the program as an important means of helping veterans reintegrate into academic settings.

“This country desperately needs a new generation of leadership and they have all the makings of what it takes, but they do need to finish college,” Gergen said. “It is very very important...to produce bridges for people coming out of the military.”