Unloading the Ad Board 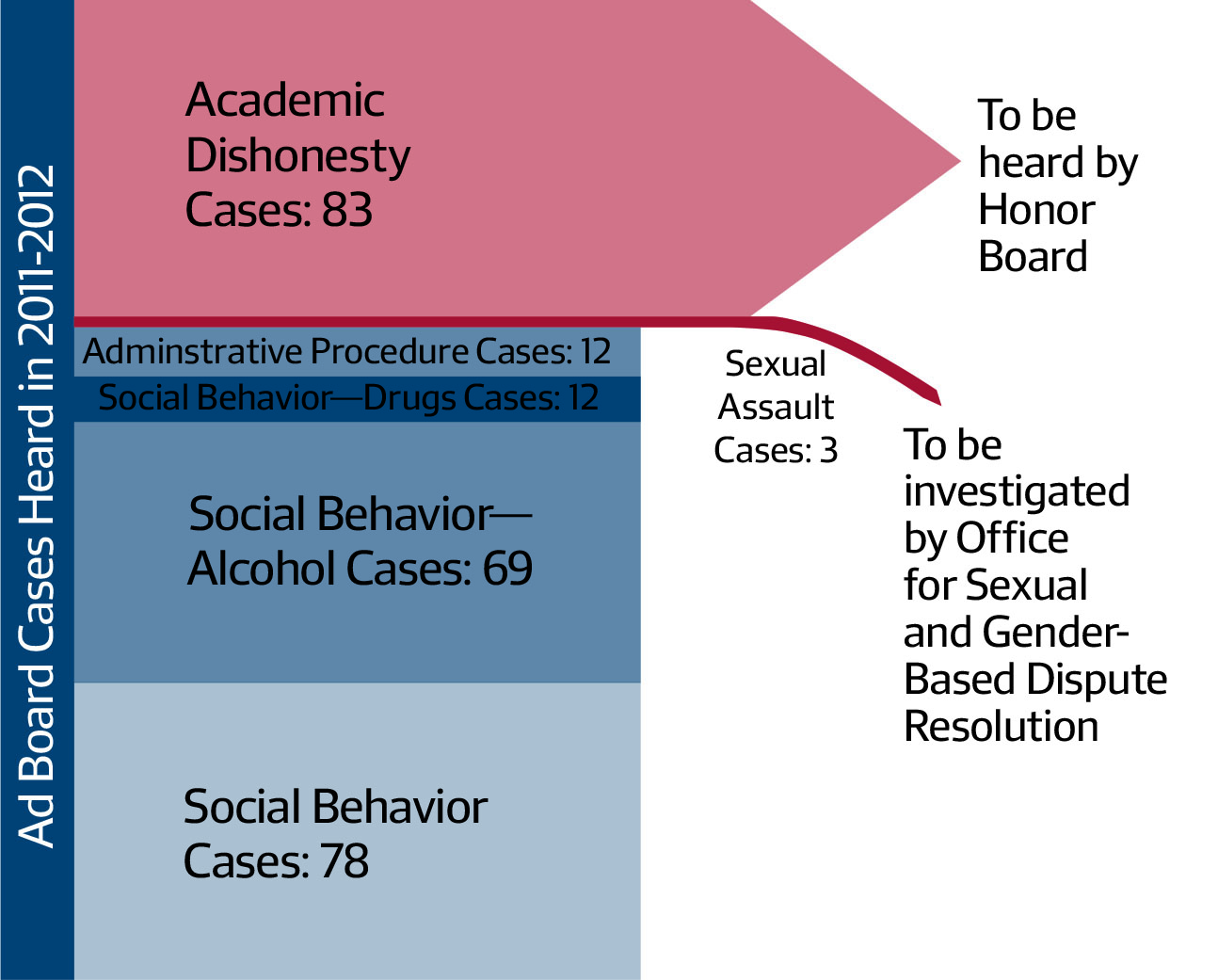 Each Tuesday, a group of 30 College administrators convene in Lamont Library. Seated in the third floor conference room, they weigh in on everything from routine requests from students—permission to study abroad or activate advanced standing—to the most serious allegations of academic misconduct.

The Administrative Board, as the group of deans and faculty members is known, has remained mostly unchanged since its founding in 1890. But two major policy changes, approved in the span of just two months earlier this year, are set to overhaul its jurisdiction and rework its purpose by next fall.

Three years ago, for instance, the College’s top judicial body heard 271 disciplinary cases. Eighty-three of those—almost a third—were related to academic dishonesty, while three were cases of alleged sexual misconduct, according to statistics on the Board’s website.

Come next fall, though, after the College’s first honor code goes into effect, the Board will no longer hear the vast majority of such cheating cases, if any. Sexual assault allegations have already been removed from the body’s investigatory purview with this academic year’s implementation of Harvard’s first-ever University-wide sexual harassment policy.

The Ad Board’s function is changing fundamentally. This time next year, the body that previously governed all the major facets of student life will no longer have the same control over the College’s handling of two issues that have most recently dominated campus discourse.

Recent scrutiny into the Ad Board’s handling of cheating and sexual assault cases would have you believe that all its work is disciplinary. Amid 2012’s Government 1310 cheating scandal, critics called the Board opaque and unfair. And as the federal government opened an investigation into the College’s adherence to anti-sex discrimination law Title IX last spring, it came under fire once more.

Much of what the Board does day-to-day, however, is less controversial. It hears academic review cases, which involve students who have earned unsatisfactory grades or have otherwise failed to meet academic requirements. In 2011-2012, the Ad Board heard 385 such cases.

The Ad Board also processes petitions for exceptions to academic policies, like those governing simultaneous enrollment. Those petitions take less time to resolve, but the Board hears many of them—1,595 in 2011-2012.

The most recent publicly available statistics on the Ad Board’s caseload are from 2012-2013, but those numbers are not representative because that year saw the adjudication of the College’s largest cheating scandal in recent memory.

That cheating scandal accelerated the Academic Integrity Committee’s efforts to propose the College’s first honor code, which will establish a distinct student-faculty judicial body to adjudicate academic integrity cases starting next fall. The several members of the Ad Board who sit on the Academic Integrity Committee, including Dean of Undergraduate Education Jay M. Harris, had a hand in shaping the policy that will siphon off the Board’s role in academic dishonesty cases.

Around the same time, a working group that included former Ad Board Secretary John “Jay” L. Ellison wrote and released a new policy governing Harvard’s handling of sexual harassment, which includes sexual assault. That policy and its accompanying procedures created the Office for Sexual and Gender-Based Dispute Resolution, a central body that now investigates sexual harassment complaints from any student across the University, removing sexual misconduct investigations from the Ad Board’s caseload.

With these changes, the Ad Board will continue to hear some discipline cases—most “social” discipline cases, like those involving drugs and alcohol—and it will still hand down sanctions in sexual assault cases, though the ODR will investigate them first. And it will no longer hear most, if any, cheating cases, which in 2011-2012 accounted for 26 of the 35 disciplinary cases that required students to withdraw temporarily from the College.

The Ad Board may hear some cheating cases if they do not fall clearly within the upcoming student-faculty honor council’s jurisdiction.

Discipline cases take up the majority of the Board’s time, according to Michael C. Ranen, the freshman resident dean for Ivy Yard and a member of the body. When the Ad Board investigated sexual assault cases, they took up a small proportion of its caseload, but they were especially time consuming, said Dean of Freshmen Thomas A. Dingman ’67.

With neither academic nor sexual assault investigations within the Ad Board’s jurisdiction, its focus will inevitably shift, something current and past members acknowledge.

“The Ad Board itself may spend more of its time on the review of requests for exceptions to rules and more on some of the social discipline, things like tampering with fire safety equipment,” said Dingman, who sits on the Board.

“It’s a huge, huge change,” added Richard M. Losick, a biology professor who previously sat on the Ad Board as a faculty member and has advised students who went before it.

Like other administrators, Interim Secretary of the Ad Board Brett Flehinger characterized the upcoming changes to the Board positively. He suggested that the shift in jurisdiction will allow it to focus more on its educational mission. The lightened caseload will help the Board “focus our energy and do our jobs better,” he said.

Despite its supposed educational mission, the Ad Board has long been dogged by an image problem. Critics question its transparency, and students associate it not with study cards, but with plagiarism investigations and required leaves from school.

The Ad Board’s reputation as a cheating board will be up in the air as the upcoming honor council takes on the task of hearing academic discipline cases. To some administrators, this shift is a chance for the Ad Board to rebrand itself.

Dingman said he hopes the changes will spur a shift in how students perceive the Board. “I think there’s a good likelihood there will be” a change, he added.

Losick imagines that as current students graduate from the College, they will take with them the perception of the “old” Ad Board, while future students will see something different.

“In a few years, the student body will change, and they won’t have the memory of an earlier era,” Losick said.

Peter F. Lake '81, a professor at Stetson University College of Law who specializes in higher education law, said it’s difficult to predict the Ad Board’s future while much remains to be seen. Details about the honor council, which will hear cheating cases next year, are still being finalized; it is likely that the Ad Board and honor council’s memberships will overlap. But Lake added that the future Board could differ dramatically.

“The future of the Ad Board could be so different that it won’t make the front page of The Crimson anymore,” Lake said.