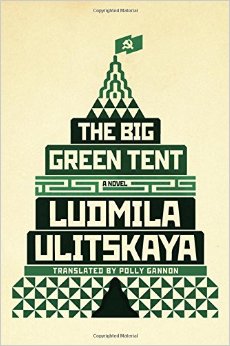 ”The Big Green Tent,” the latest novel from Russian literary giant Ludmila Ulitskaya, opens with the story of three young boys, Ilya, Mikha, and Sanya, as they meet and become fast friends. Students in a Moscow school during the post-Stalin years of the Soviet Union, they call their trio the Trianon. But while “The Big Green Tent” begins and ends with the Trianon, for much of the book Ulitskaya concerns herself with creating an engaging and massive tableau of Russia that spans hundreds of miles and tens of years. As the book leaps effortlessly from year to year, character to character, it ingeniously tells the story of a generation that is at the same time in love with and at war with its homeland.

The middle pages read less like a novel and more like a series of interconnected short stories, a structure that Ulitskaya uses to enforce the idea that the book is both about the larger picture and simultaneously the small and seemingly meaningless details of life. This effect serves to paint a broad picture of the Soviet Union, but it means that many characters blur together and become regrettably vague as the chapters pass. In this way, Ulitskaya makes time malleable and lets the thread of narrative independently weave its way through the book. Much of the novel is centered around Ilya, a dissident photographer and distributer of samizdat (banned literature); his wife Olga, the daughter of a general who is expelled from university for defending an anti-Soviet professor; and their varied acquaintances. Yet the chapter where Olga appears, only a scant hundred pages into the book, is the chapter where she and Ilya die.

One could say the rest of the book is merely filling in the blanks, but this excessiveness also points to Ulitskaya’s apparent desire to tell not just the story of her characters but of Russia itself. Ulitskaya’s fascinating cast of characters, ranging from a dissident cartoonist in exile to a book binder by the name of King Arthur, are enormously vibrant and varied, though ultimately forgettable. Some are an exception to this rule, and the stories of the idealistic Mikha, whose death is the result of an unending series of well-meaning but disastrous decisions, or Sanya, a disabled piano player who can no longer play and retreats into the world of theory, leave a lasting impression. Instead focussing on making her characters memorable and compelling, Ulitskaya uses “The Big Green Tent” to illustrate the sprawling nature of the late Soviet Union through this structure of interconnected small vignettes. The satisfaction of finding clever connections makes the seemingly unrelated chapters a joy to follow.

Threading throughout the novel is a great love of literature that, through Ulitskaya’s prose, proves to be infectious. “The Big Green Tent” imparts at least a cursory knowledge of the greatest names in Russian literature, poetry, and music: Pushkin, Tolstoy, Pasternak, and their ilk are always on the tongues of Ulitskaya’s characters. Books serve as inspiration for the Trianon after the boys’ Russian literature teacher opens their minds to the world of the written page. In a society oppressed by the ever-watching eyes of the government, books become both an escape into another world and a way of rebelling against the regime. “It all seemed trivial and unimportant,” proclaims Mikha as he finishes a new piece of samizdat. “He felt guilty for merely living, while Daniel, this marvelous writer, had penetrated to the very essence of their current life.” Ulitskaya uses these bursts of adoration from her characters to show the power of written word, which translates skillfully across the pages of her own literary work.

This love of literature is not without its dark side, as Ulitskaya shows more and more in the later chapters. By dualistically presenting art as salvation and destruction, she makes art’s two-sided nature emerge slowly, but this conceptualization of art as a potentially destructive force soon becomes a central question and is one of the most engaging themes of the work. Art is both what helps the Trianon grow into adulthood and what teaches them the necessities of life; at the same time it is what attracts the attention of the KGB and sends their lives spiralling into despair. It leads to both life’s pleasures and pains, and could be said to be life itself. Yet if one considers art to be life itself, can one surrender it just to conform to the needs of the state? Ulitskaya navigates through these dark themes with a deft hand, lending the book a deeply philosophical nature that naturally complements its use of cleverly connected storytelling.

“The Big Green Tent” is massive in both length and scope. Its myriad of interconnections make it a delight to read, and the plethora of themes lend it a depth that inspires questioning and deliberation. Ulitskaya is a realist but a relatable one, and her characters are fascinating and diverse if at times forgettable and opaque. With its enormous cast, numerous pages, and subtle exploration of themes, it is not a book one may quickly breeze through, but Ulitskaya’s epic will reward patience, a love of literature, and an eye for detail with a brutally stark portrait of her homeland’s darkest years.

—Staff writer Ben G. Cort can be reached at ben.cort@thecrimson.com.