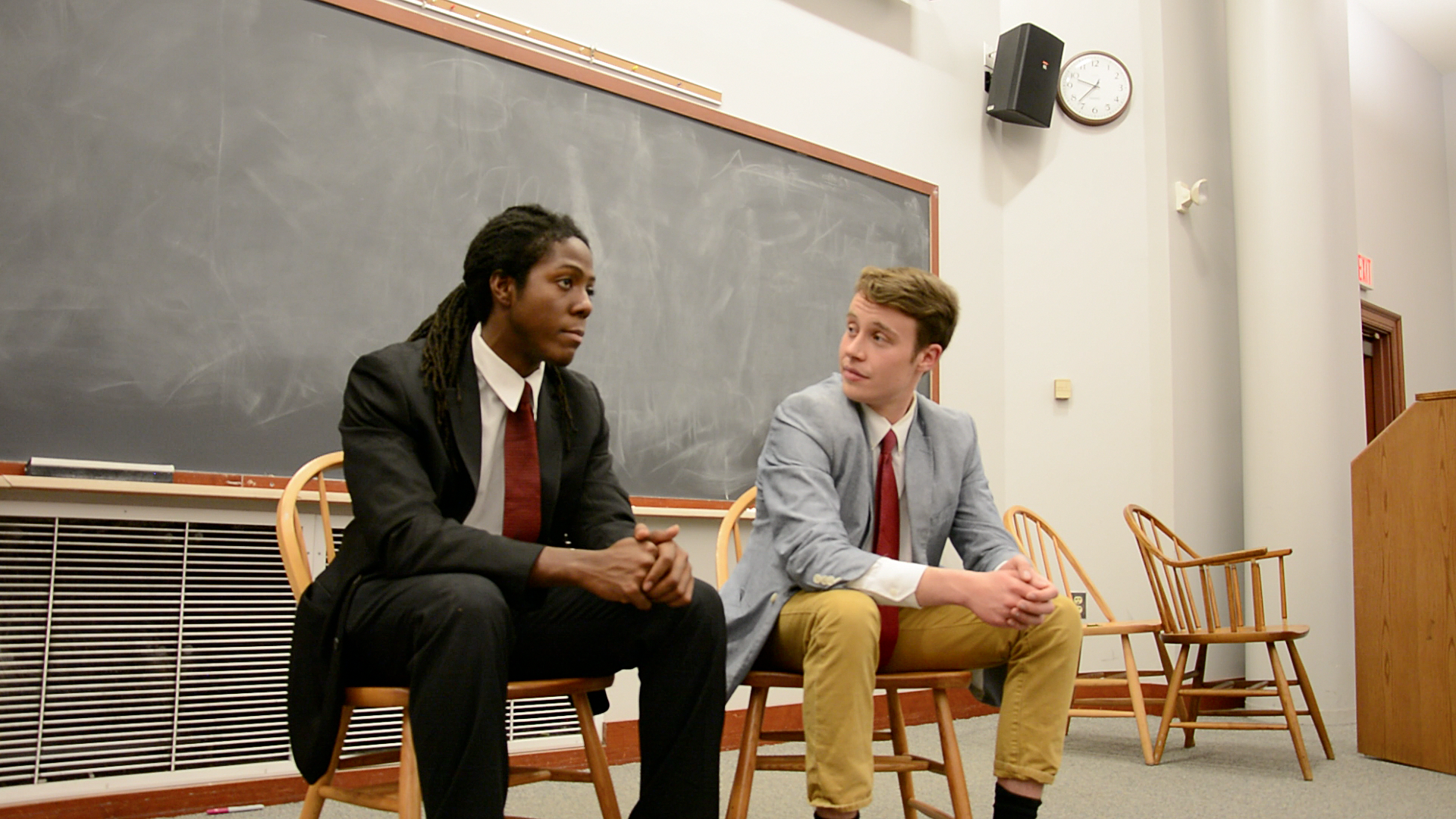 Greenlaw and Morris Focus on Mental Health and Social Life

From struggles with mental health to criticisms about social spaces on campus, William A. Greenlaw ’17 and William F. Morris IV ’17 are trying to connect their personal experiences to their platform.
By Aafreen Azmi and Jesper W Ke

William A. Greenlaw ’17 and William F. Morris IV ’17 first met by chance in Annenberg Hall during the flurry of handshakes and introductions at the beginning of freshman year. Initially bonding over their shared first name, the pair quickly realized they had much more in common.

Both candidates come from areas that rarely send students to Harvard. Greenlaw, a Government concentrator in Pforzheimer House, hails from a public high school in northwestern Indiana, and is a first-generation college student. Morris, a joint History and East Asian Studies concentrator also in Pforzheimer House, came to Harvard from a town of around 1,200 people in northeastern Georgia. He was the first student from his school to attend Harvard in more than 40 years.

Bearing radiant grins and vibrant personalities, Greenlaw and Morris describe themselves as easygoing yet driven—two qualities that they say qualify them to take the helm of the Undergraduate Council Presidency and Vice Presidency respectively.

From struggles with mental health to criticisms about social spaces on campus, Greenlaw and Morris are trying to connect their personal experiences to combat stigma surrounding mental illness, bolster initiatives for sexual assault prevention, and push for greater support of open social spaces.

Both candidates draw from experience in varied extracurriculars, ranging from vocal impersonations to sexual assault advocacy, as inspiration for their campaign platforms.

Although Greenlaw has been a UC representative for more than a year and spearheaded initiatives on the Council’s finance committee, Morris has never served on the UC. The two say that their leadership in and outside the UC—they are the only ticket comprised of one UC representative and an outsider—means they can better address undergraduates’ concerns.

Outside of the UC, Greenlaw is involved in mock trial, ballroom dance, and serves as Vice President for the Voice-Actor’s Guild, a group that performs voice impression events.

“I like the idea it is going to put pressure on the administration to allow for student input,” Greenlaw said.

Morris, meanwhile, is an active member of the Harvard International Relations Council and serves as the director of a term-time after-school program in South Boston. He also is the community service and alumni relations chair of the Sigma Chi fraternity.

Morris has most recently sought to bring attention to the topic of undergraduate mental health and the availability of University health resources. In op-eds and on social media, Morris described personal struggles with depression and encouraged other students to publicly share their struggles with mental health. This Thanksgiving break, Morris said he will be speaking at a conference hosted by the Jed Foundation, a national organization for mental health advocacy.

“Many issues in mental health are tied to issues of identity,” Morris said. “We’ve heard some horror stories from our friends... the counselors don’t understand where they’re coming from.”

In an emailed statement, Barbara Lewis, the acting chief of Counseling and Mental Health Services, wrote that out of a staff of 28 counselors, seven are people of color, and staff provide counseling on a range of issues. 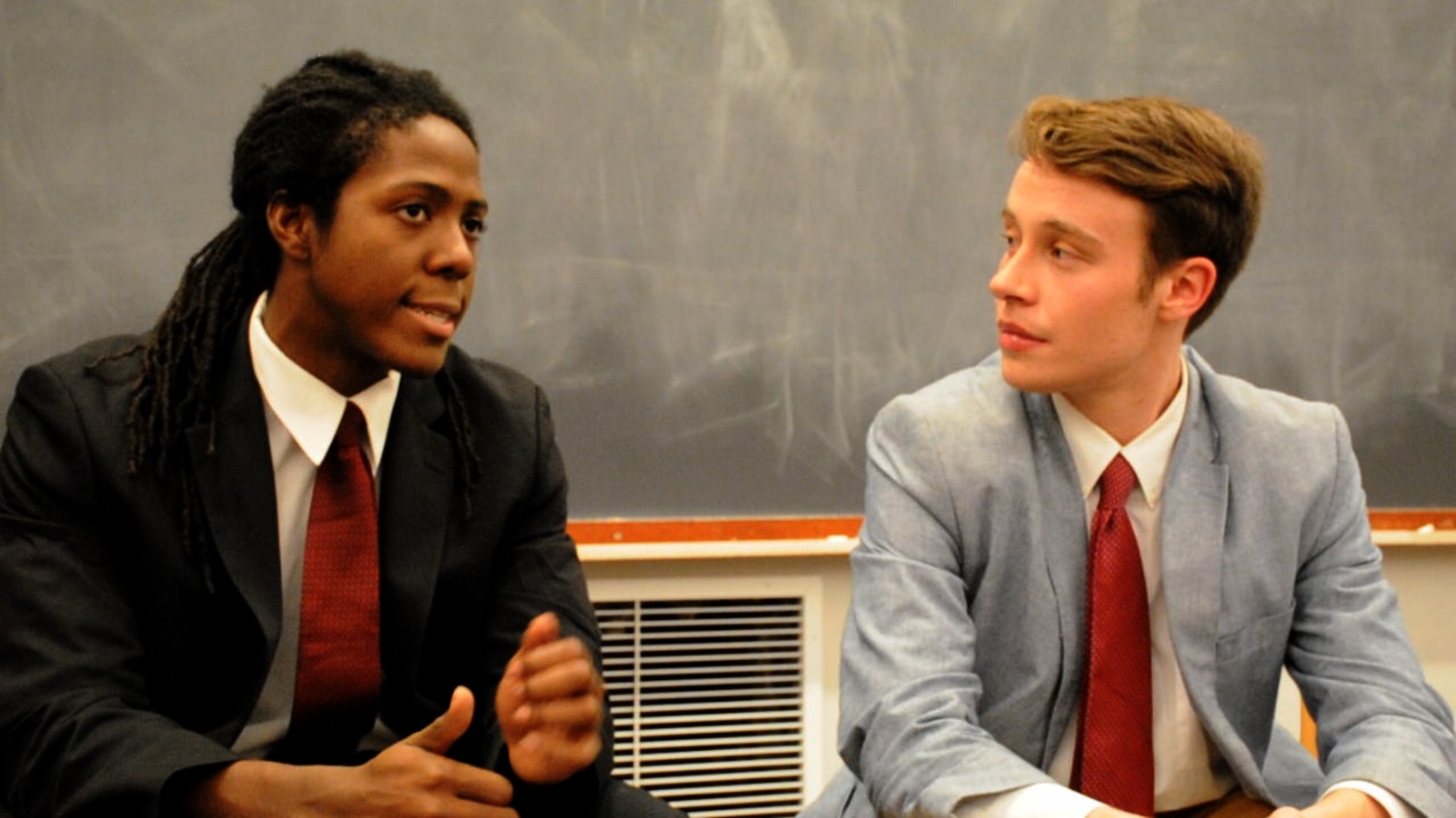 “HUHS Counseling and Mental Health Services (CAMHS) is always looking for diversity in its staff members, and this diversity comes in many forms,” she wrote. “If students do not feel that they can find a good fit from within CAMHS, they can also be referred to counselors in the area,” she added.

Like with other campaign initiatives, Morris draws on his own experiences—struggling with transitioning to Harvard—to argue for the destigmatization of mental health issues. In September, he published an op-ed in The Crimson about what he said was the stigma surrounding mental health on campus.

Morris and Greenlaw also propose instituting workshops that they would call “Harvard Listens.” These would provide a forum for students to openly discuss issues such as body image, stress, and suicide, Morris said.

“With these workshops, we want to bring people together to talk about these issues that they think are unspeakable,” Morris said.

Although they are running to lead the student government at Harvard College specifically, Greenlaw and Morris said they hope their proposals will set a model for other institutions nationwide.

“We want to be the student government...who tackle the issues that are very sensitive for the sake of the student body in the hope that it will affect the people on campus and will hopefully serve as a model for other campuses,” Morris said.

“If I were a student, I would vote for Will,” Dillon said.

Joe L. Choe ’17, a student in Kirkland House who knows both candidates, believes that Greenlaw and Morris can bring about tangible change should they be elected.

“Oftentimes in elections, we hear these lofty goals and empty promises,” Choe said. “They have action steps that are concrete, and they’ve thought through everything in a way that I do believe with confidence that they’ll be able to achieve everything that they promise.”

Greenlaw and Morris have drafted a plan to mobilize and create UC programs to bolster sexual assault awareness through bystander intervention training, and pressure administrators to subsidize costs for social spaces.

The pair propose an additional training program on sexual assault and bystander intervention, in conjunction with the Office of Sexual Assault Prevention and Response, which they would call the “OSAPR Connection Bonus.” Greenlaw said they would incentivize student groups, by using a group’s participation in consent training as a criterion for additional funding in the UC grant process.

Over the longer term, Greenlaw and Morris hope to implement a similar incentive-based program that would encourage party hosts to designate sober party monitors and display posters of their faces, names, and contact information during parties. Morris said that Sigma Chi officers already use a similar practice at their parties.

Greenlaw added that all Houses should host early move-in dates for Sophomores in the fall, when affiliates can hold training in addition to bonding activities. “Bind these together: Let sophomores move in early, socialize them together, and teach them community norms, like affirmative consent or mental health,” Greenlaw said.

On the third prong of their platform—social spaces—Morris and Greenlaw are calling on the administrators to increase access to social spaces on campus, a topic that has recently captured the focus of undergraduates. Several House masters have opened up new party spaces this semester, and Faust offered up additional funding for social events to the Dean of the College Rakesh Khurana in October. The College’s unrecognized final clubs have also faced mounting administrative scrutiny, but Morris said social issues extend beyond these groups.

"The problem is the lack of social spaces on campus that everyone can go to," Morris says.

“In my opinion, the final clubs are just a symptom of the problem, they are not the problem [itself.] The problem is the lack of social spaces on campus that everyone can go to,” Morris said.

Greenlaw and Morris said that existing spaces such as dining halls and the rooftop of Felipe’s Taqueria could serve as alternative social venues. The pair advocates for administrators to subsidize or waive fees to rent on-campus spaces, and subsidize off-campus space usage by student groups. Labor for moving chairs and tables could be covered by volunteers in student groups, Morris said.

In addition to these goals, Greenlaw and Morris said they hope to increase accessibility on campus, school pride in athletic events, and student involvement on the UC.

“We want to have outreach that goes beyond the UC, we want to make the UC something that the student body they can trust and depend on more than they have in years,” Morris said.

Voting in the UC election opens on Nov. 16.