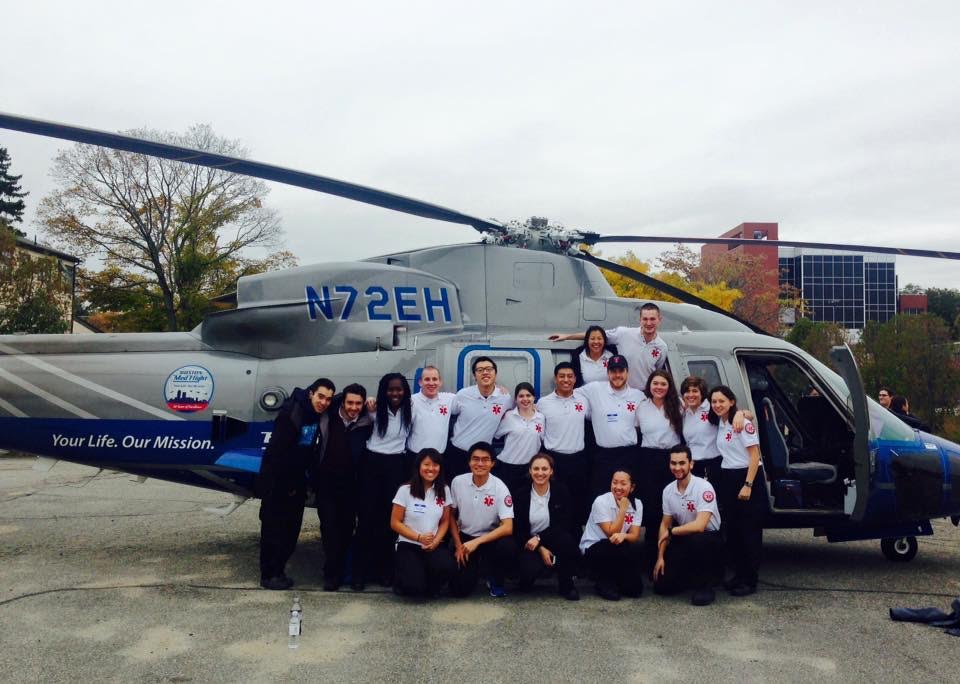 He first became interested in becoming an emergency medical technician before college. “When I was a senior in high school, one of my friends told me about a summer EMT class,” Leith said. “I really enjoyed my training and spent a gap year working at one of the ambulance companies.”

Leith is now a longtime veteran of the organization. After his gap year, he served as a teaching fellow for CrimsonEMS’s first EMT training course during his freshman fall and went on to join the organization’s board the following semester.

While many students may not recognize that some of their peers are acting EMTs, CrimsonEMS looks after nearly every facet of social life on Harvard’s campus. From the sidelines of the Harvard-Yale football game, to behind the DJ booth at First Chance Dance, to late night ambulance ride-alongs in the streets of Cambridge, CrimsonEMS is on duty.

TOOLS OF THE TRADE

CrimsonEMS is Harvard’s student-run first responder organization. The organization’s mission is twofold: to provide medical services and to train new EMTs. They perform stand-by services at athletic events on the intramural, club, and varsity levels, as well as at other events sponsored by the Office of Student Life. In the case that something goes wrong at these events, according to Leith, CrimsonEMS “provides immediate first aid and then helps arrange transport to the hospital, generally staffing around 24 hours worth of events per week.”

The action that CrimsonEMS sees at these events varies depending on the sport or activity. According to Leith, a rugby game might yield eight to 10 patients, while the largely attended Harvard-Yale Game around 30. At events such as this year’s freshman First Chance Dance, Leith added, CrimsonEMS sent eight people to the hospital, mostly for alcohol intoxication.

The second goal of the organization is to train new EMTs and Harvard affiliates in simple first response tactics. All CrimsonEMS members are Massachusetts-certified at the EMT-Basic level.

The EMT training process is rigorous, requiring a heavy time commitment of 15 hours every week for the semester, according to Leith. The course covers the basics: first aid, CPR, heart-attacks and other medical emergencies, as well as pre-hospital trauma life-support, emergency vehicle instruction, and hazmat training. For students, Harvard University Health Services subsidizes the normally $800 price tag. The group has a standing membership of 40 to 55 undergraduates, from freshmen to seniors.

While Leith and the other officers teach some of the training courses, additional courses and support are provided by the Cambridge-based emergency medical response company Pro EMS, which allows CrimsonEMS trainees and EMTs to do ambulance ride alongs, providing them with a more hands-on experience.

Once they have finished the training course, CrimsonEMS members typically work about one or two shifts per month. Many CrimsonEMS members, both current and past, look fondly on their experience. Several undergraduates explained their varied motivations for joining the service. For some, it tied into their pre-med goals, while others expressed a desire for practical ways to give back to Harvard.

“It comes down to wanting to help people and stepping up to serve our community in the best way we can and being able to use the training we receive to actually save lives,” said Annelie E. Herrmann ’18, a current EMT.

Though the training process was demanding and the nature of the work itself high-risk, Herrmann considers the experience worthwhile.

“We got to learn a lot of interesting skills that we will be able to use immediately,” she said. “I’ve definitely met some of my best friends here too.… I really looked forward to [training] every week.”

Among those “retired” from CrimsonEMS is Brett M. Biebelberg ’16, who joined the program in its first year of training courses. Biebelberg, having already received an EMT qualification in his hometown of Springfield, N.J., helped with training and participated in a few ride-alongs with the Pro EMS ambulances. He mentioned the excitement and “adrenaline rush” that goes hand and hand with providing emergency medical services.

“There’s this unmatchable feeling of not only knowing that for a certain period of time, the 16 hours on shift, you are entrusted by your community to respond to an emergency,” he said. “It’s exciting. It’s scary. It’s intimidating, but after the fact it’s satisfying to say ‘I did something positive.’”

For Evan R. Komorowski ’18, a current member, the motivation to join the group stemmed from his childhood. “There was always was a great respect for first responders in my community growing up as a kid, which really motivated me to join CrimsonEMS,” he said.

The weekly commitment of 15 hours for a full semester of training proved rigorous, but also relieving from collegiate life, Komorowski added. “It was welcome departure from homework in every day classes because learning how to apply a tourniquet is so different from other school work,” he said.

Sophia M. Emmons-Bell ’18, CrimsonEMS finance officer, said training with the organization shifted her perception of possible careers in medicine. “On this campus being pre-med you feel like there’s one track to go down,” she said. “This experience made me realize there are actually a million different ways you can take your interests.”

One of the challenges that many former and current CrimsonEMS members expressed was a perceived detachment between them in their roles as EMTs and their classmates. Emmons-Bell said when she is in her CrimsonEMS uniform, she feels distanced her from her peers and that there is an increased degree of responsibility placed upon her.

“You are both a student and someone who is responsible for other students during your shift at a party,” Emmons-Bell said. “I was wearing my uniform and there was a huge disconnect between me and the other students.”

Part of the satisfaction CrimsonEMS members say comes with their work is the fact that they willingly give up their time, putting on a uniform for the social event, rather than partaking in it.

“The EMTs from CrimsonEMS who are willing to dedicate time to be on hand for football games and at dances are acknowledging that they are not the one’s who are going to be having fun at the football game,” Biebelberg said. “They have sort of dedicated their time as on duty, on call, and ready to respond, and so in that way it is very much a selfless activity.”

In the coming years, CrimsonEMS hopes to improve its outreach and first aid education efforts beyond the current crop of EMTs. One example among these education programs is the CPR training that the organization offers for official certification.

Leith stressed the importance of this qualification.

“The most important factor in a cardiac arrest is how quickly you respond to it,” he said. “Even if it takes emergency services two minutes…it still makes a world of difference if someone has been doing CPR on the cardiac arrest victim,” he said.

Organizationally, Leith also highlighted several areas of future growth, such as expanding the number of opportunities to treat patients and serve the campus. There are also plans to develop the Pro EMS ambulance ride-along training.

Going forward, Leith also hopes to improve CrimsonEMS’s partnerships on campus. “I hope to form new relationships with more organizations and find new chances to serve the campus and be there for patients,” Leith said.