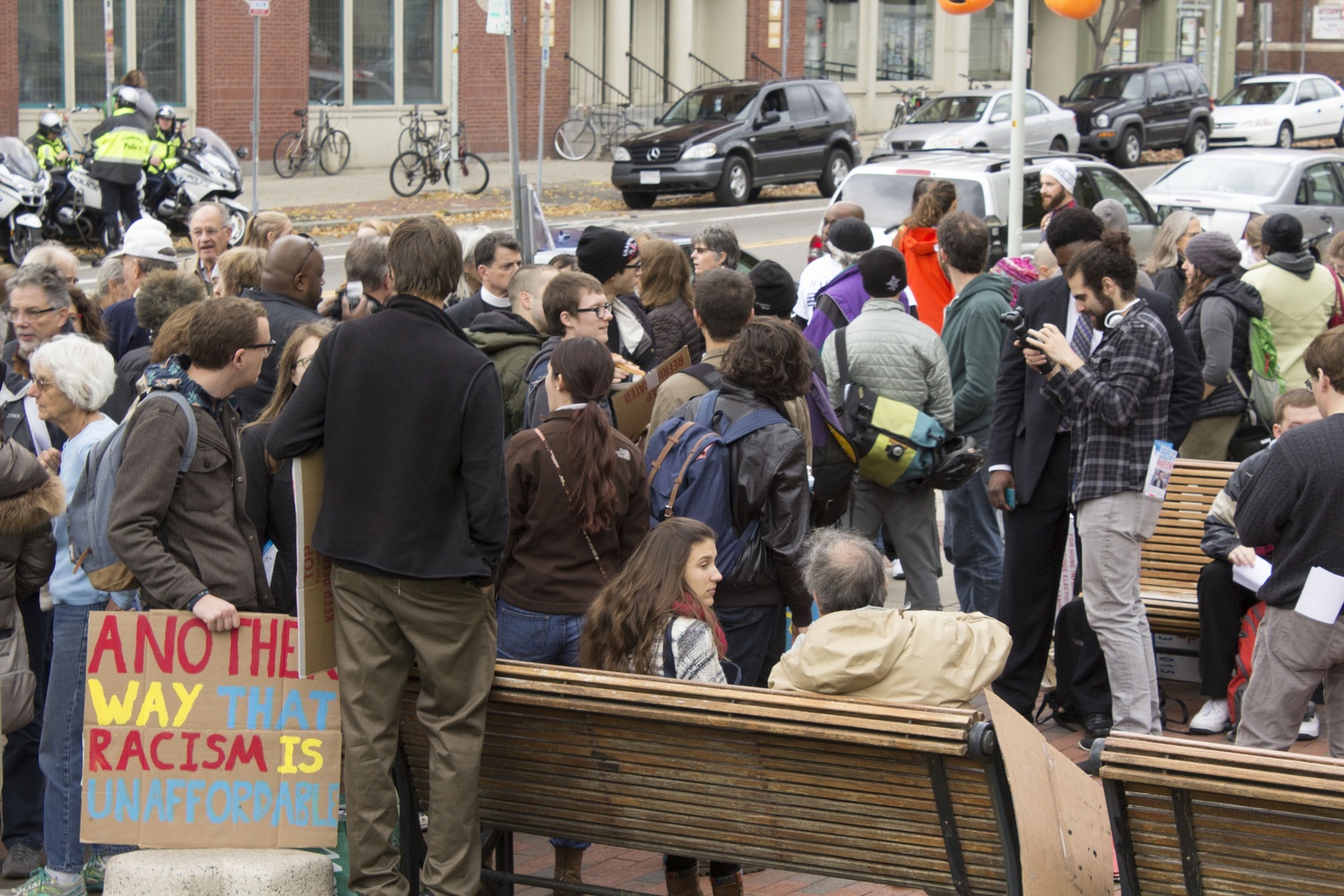 About 100 demonstrators gathered at Cambridge’s City Hall with hand-painted signs bearing slogans such as “Fight for $15,” “Youth Development, Not Corporate Development,” and “Raise Wages, Not Rent.” The march proceeded across the city to Kendall Square, stopping at three sites which Black Lives Matter Cambridge organizers said pointed to the corporate development and gentrification of the city.

“People of color, low-income people, and people living in the projects are scared about how quickly affordable housing is disappearing from Cambridge,” said Stephanie Guirand, a lead coordinator of the group.

Guirand and other demonstrators called on Cambridge City Council candidates to support the expansion of non-profit and low-and-middle-income housing developments.

Several candidates for Cambridge City Council also marched with the advocates, garnering praise from organizers for what they described as progressive agendas and “common sense,” though they added that BLM Cambridge does not endorse candidates. City Council candidates in attendance included Mike Connolly, Jan Devereux, Ilan Levy, Nadeem A. Mazen, and Romaine Waite.

“For my whole life, I have heard it said that we need to have a dialogue about race, and as a white person and someone who is white-privileged, that’s something that I’ve always wanted to do, but the Black Lives Matter movement has really made the dialogue about race happen in this city,” Connolly said.

In a speech before the crowd, Waite claimed that the affluence of Harvard and MIT students is a factor in rising Cambridge rent prices. He declined to comment further to The Crimson.

For his part, Dillon “Dil” C. Harvey, a Cambridge housing search advocate for the poor and homeless, led chants calling for “Housing for the people, jobs for the people” and “Cambridge for the 99 percent, not the 1 percent.”

“I am witnessing the eradication of subsidized and truly affordable housing firsthand because I have clients who have been on waiting lists [for housing] for years,” Harvey said. “So many marginalized folks get knocked out of eligibility due to credit or quarry checks.”

Kevin E. O’Donnell ’16, a Harvard student who is currently on leave, was among the participants. He said his interests in the rally stemmed from the intersection between urban planning and racial justice.

“Urban space is the future of our lives,” O’Donnell said. “So if we don’t have a say in it, people who don’t have our best interests at heart will be the ones who dictate how the city looks.”

In a Kendall Square business park, Cambridge teenagers Don Michel and Marquis Tashawn Taylor closed the demonstration with a rap song about their own experiences.