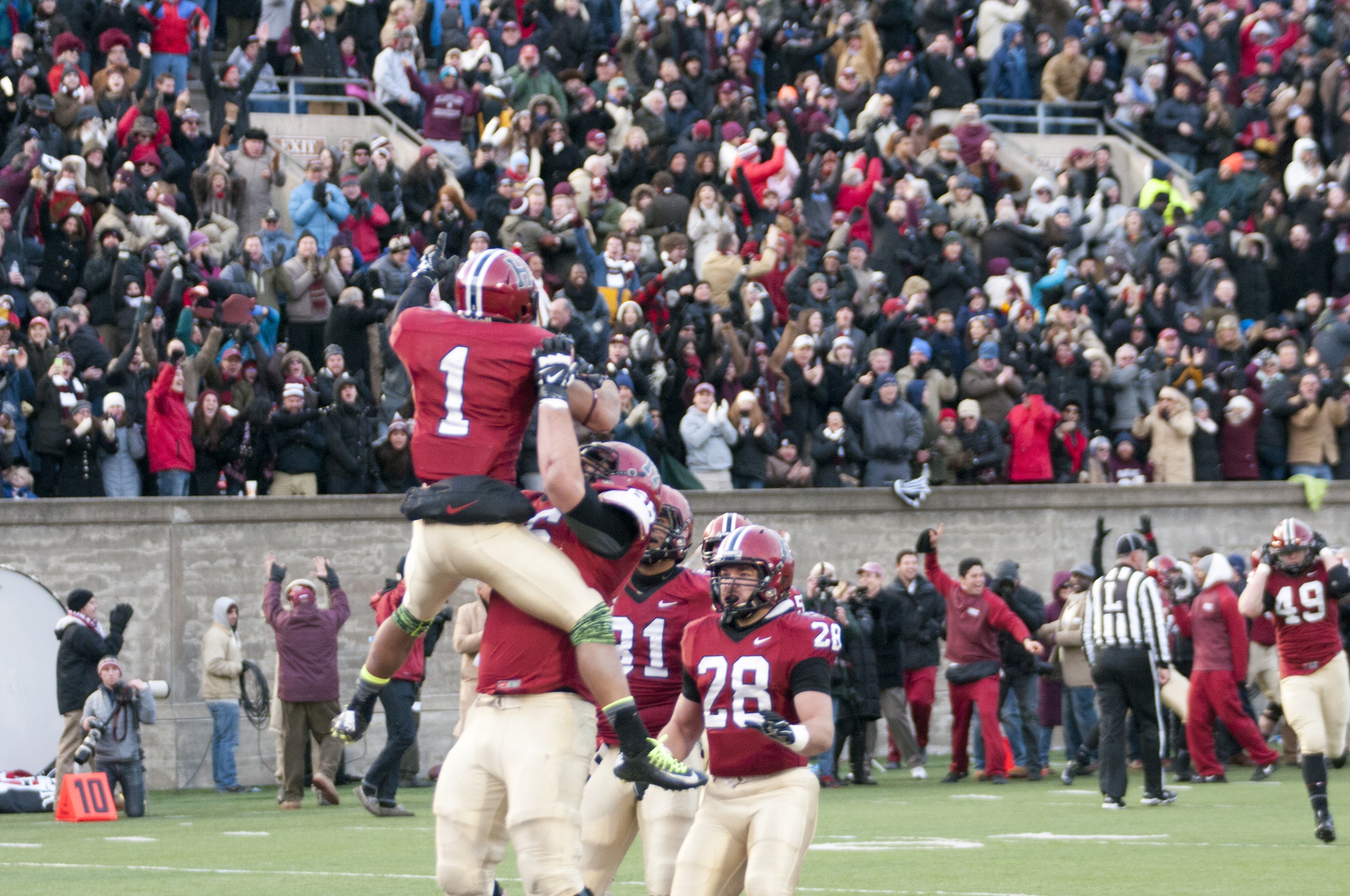 Two weeks before last year’s Harvard-Yale clash, a crew from ESPN visited Cambridge to scout out possible locations for College GameDay, the sports network’s premier college football show. It was a big moment for Harvard athletics, a chance for its program to secure unprecedented visibility on a show watched by millions of fans and potential recruits.

Midway through the visit, prospects looked grim. First, the visitors checked out Ohiri Field, but the head cameraman found it to be too far from Harvard Stadium. Next they tried O’Donnell Field, but the view of the stadium was not ideal. Finally, Harvard athletics officials brought the crew to the Dillon Quad, which Associate Director of Athletics Tim Williamson described as their “last resort.” 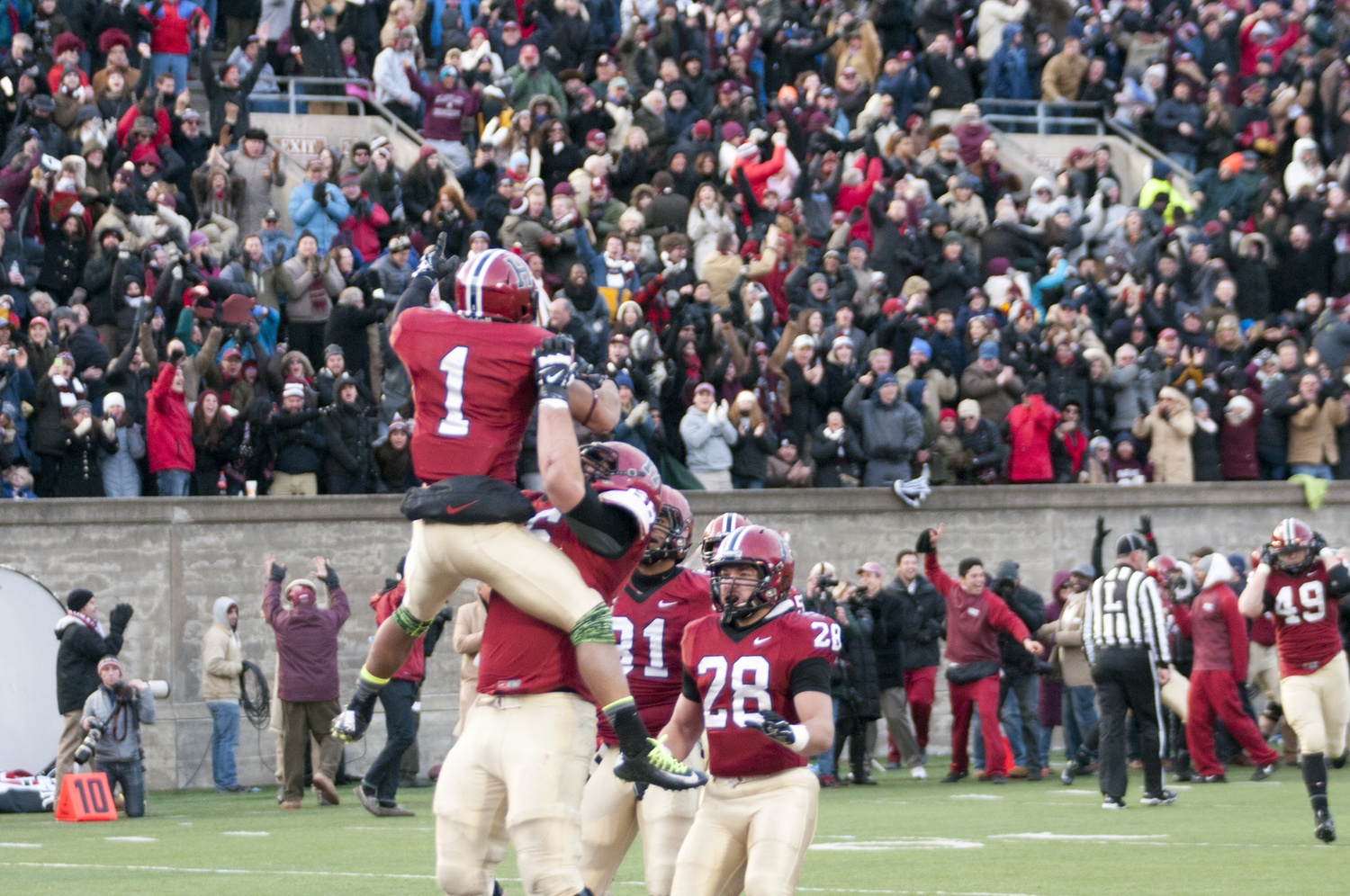 Wideout Andrew Fischer celebrates after scoring the game-winning touchdown in the 131st playing of The Game in Cambridge in 2014. By Robert F Worley

When they arrived at the quad last year, Associate Director of Athletic Communications Alison Miller noticed a change in the crew. “The guy walked in, and his jaw just dropped,” she said.

“I knew that moment we were going to get it,” Williamson said.

Now, a year later, the legacy of hosting ESPN’s flagship college football show—and the months-long campaign to bring the show to campus—still affects Harvard athletics. According to Williamson and Harvard football coach Tim Murphy, the show has delivered lasting benefits to the department. Most significantly, these include a boost to recruiting efforts.

“I hope that two or three years from now people can look back and coaches can say, ‘That was helpful’,” Williamson said. “For our other sports, too—we hosted a big-time event, so recruits will know there are big-time events that come here.”

While Murphy doubts hosting GameDay will have measurable effects on recruiting results long-term, he notes that it has nonetheless been helpful. “We certainly used all of that in terms of our way to market our program. GameDay is a permanent presence in the 2014 highlight video, and it’s amazing how well and what a major college feel that gave to our Yale game, and certainly to our season last year.”

“For that one day, the center of the college football universe was here,” he said.

The process of bringing GameDay to Allston started nearly four months in advance. The show, which has traveled across the country to college football games since 1993, had never made an appearance at a Harvard home football game, though the show did travel to a Harvard-Penn game in Philadelphia in 2002.

In August 2014, when Williamson and Miller began contacting ESPN, their primary goal was simply to convince the GameDay anchors to devote a short segment to the Harvard-Yale matchup during the week of The Game.

“We went through and picked out stories from our guys because we figured we’d get at least a feature story on GameDay,” Miller said. “We looked at Zack Hodges ’15 and his draft potential, Norman Hayes ’15 and his family tragedy.” Hayes' younger sister Olivia had died in an accident a few years earlier.

After a few weeks of e-mailing ESPN with pitches, however, Miller and Williamson began to realize hosting the show itself might be a possibility. According to Williamson, tides started to turn in Harvard’s favor as both teams continued to win games.

“[ESPN] didn’t respond to anything until after Yale beat Army,” Williamson said. “Then we clobbered Princeton—I think that had a sneaky little influence helping us since the game was on their network, ESPN3.”

After Harvard beat Dartmouth, it was all but inevitable that the race for the conference championship would go down to the wire. At that point, the Crimson led the Ivy League at 7-0 and the Bulldogs stood in second place at 6-1. Williamson then received a call from ESPN.

“I got a call that said, ‘If you guys keep winning, you have a good chance of hosting the show’,” Williamson said.

After Harvard beat Columbia and Yale defeated Brown in week eight of the regular season, GameDay told Williamson that they would be traveling to Harvard for an official site visit.

The visit, he knew, would not be an easy sell.

“They give you the standard booklet of things that GameDay needs, and it was a lot of space,” Miller said. “Something like several acres of space. They need a field to do their demonstrations on, and we realized we don’t have enough space in the quad, so we went back and forth about what to show them.”

The GameDay crew arrived on Veteran’s Day, and according to Williamson, a full staff turned in despite the holiday.

“We had 15 to 20 people across the department come in for the walk-through on their day off,” Williamson said. “Everyone was doing what they had to do to help facilities and I get the visit done.”

After Harvard defeated Penn the following week, GameDay called Williamson and made it official.

The week leading up to The Game was a blur. “The two of us didn’t sleep at all, and I was here every day at 5:30,” Williamson said. “The Game was almost an afterthought because ESPN was broadcasting Wednesday, Thursday, Friday, and Saturday morning.

As producers pulled aside players and coaches throughout the week for interviews and specials on SportsCenter, which were filmed live on site for two days, the football program’s week was no less busy.

Murphy said, “Yale game week is always administratively and media relations-wise by far the most hectic week of the year for obvious reasons. This made it go from an extremely hectic week to an extraordinarily hectic week.”

“It seems like we were constantly juggling media requests that were either directly connected with GameDay or ESPN or a result of it," he added.

Murphy, however, praised the show’s intensity. “To their credit, GameDay was a constant presence, and I just couldn’t believe how personal and professional their talent people were, their on-site people, their administrative people.... It made me appreciate why GameDay is really such an iconic thing. Having to juggle all these events is well worth the opportunity to be on such a national platform.”