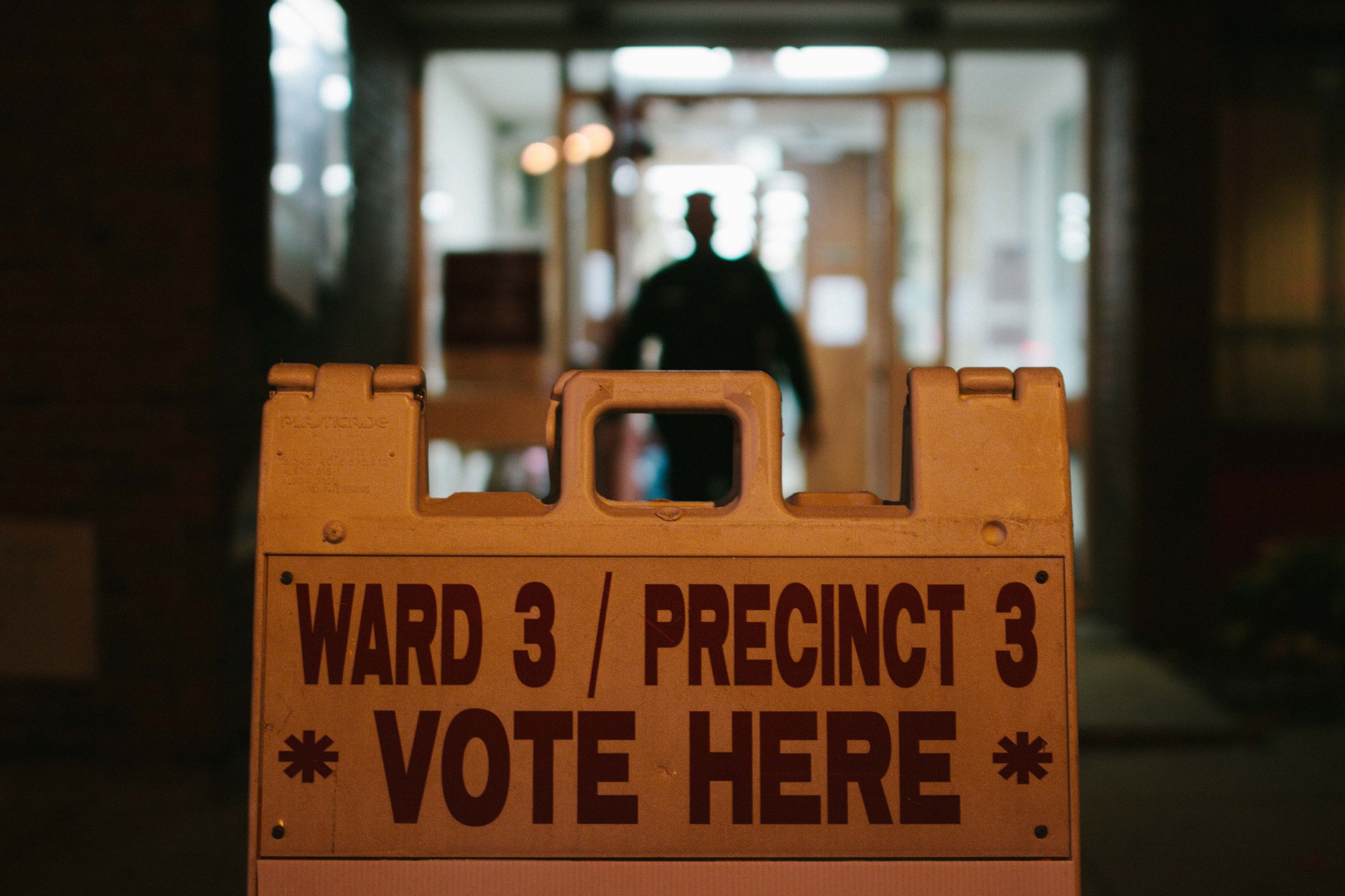 The Cambridge Municipal Election draws to a close outside of a Salvation Army in Central Cambridge on Tuesday evening.
By M. Hanl Park and Samuel Vasquez, Crimson Staff Writers

Eight of the nine seats on the Cambridge City Council will be taken by incumbents next term, according to preliminary results released by the Cambridge Election Commission late Tuesday.

The results come after a preliminary processing of the ballots and are subject to change as the remaining ballots are counted. Absentee ballots and provisional ballots will be counted at 5 p.m. on Nov. 13.

This year’s election cycle was characterized by the resurgence of slates—groups of candidates running on a shared campaign platform—in City Council campaign politics.

The campaign was notable for the formation of the all-incumbent Unity Slate, featuring seven of the nine incumbent council members. An opposing slate, the Slate for Cambridge, was created to as a means to promote new voices in local politics.

Historically, slates have been a feature of Cambridge City Council elections, largely due to the city’s proportional representation voting system.

In proportional representation’s unique system of counting ballots, votes can be transferred from top candidates to lower-ranked candidates. This transferring of votes by ranking makes slates an attractive option for candidates, as shared platforms encourage voters to rank a group of candidates similarly and pool transferred votes.

Despite the slim odds facing newcomers to the Cambridge political scene, Katy Downey, who cast her ballot on Tuesday, said she had been enthusiastic about the fresh faces campaigning for positions on the Council.

“This year in particular, there are a couple of incumbents whose time may have passed,” Downey said. “We have some new energy coming in.”

While 14 non-incumbents could have been ranked on Tuesday’s ballot, one of those—John Sanzone—had ceased campaigning just days before the election.

On Oct. 26, Sanzone announced he was no longer seeking public office in Cambridge, following the revelation in The Cambridge Chronicle that he had posted several racist and homophobic online comments in his youth. Sanzone wrote these posts on Stormfront.org, a white supremacist website, from the time he was a teenager into his time at college.

While Sanzone never held public office, he was known in Cambridge as a passionate advocate of transit issues. Following the revelation, candidates across the political spectrum voiced their support of the work Sanzone has done for Cambridge infrastructure.

In addition to transit, the 2015 campaign public discourse was primarily dominated by issues of development and affordable housing.

While development has occupied the limelight in Cambridge politics for the past few years, the debates surrounding affordability and transit heated up this election season as citizens called for a stronger response from the City Council.

“Cambridge is rightly known as a very politically astute community,” Patrick J. Scully, the Communications Director of the Slate for Cambridge said. “[Citizens] are willing to engage...they’re willing to ask questions about affordability, about housing, about transit.”

In tackling these issues, Nadeem A. Mazen, the top vote recipient on Tuesday night, said he hoped the incoming Councillors would be more willing to collaborate despite differences.