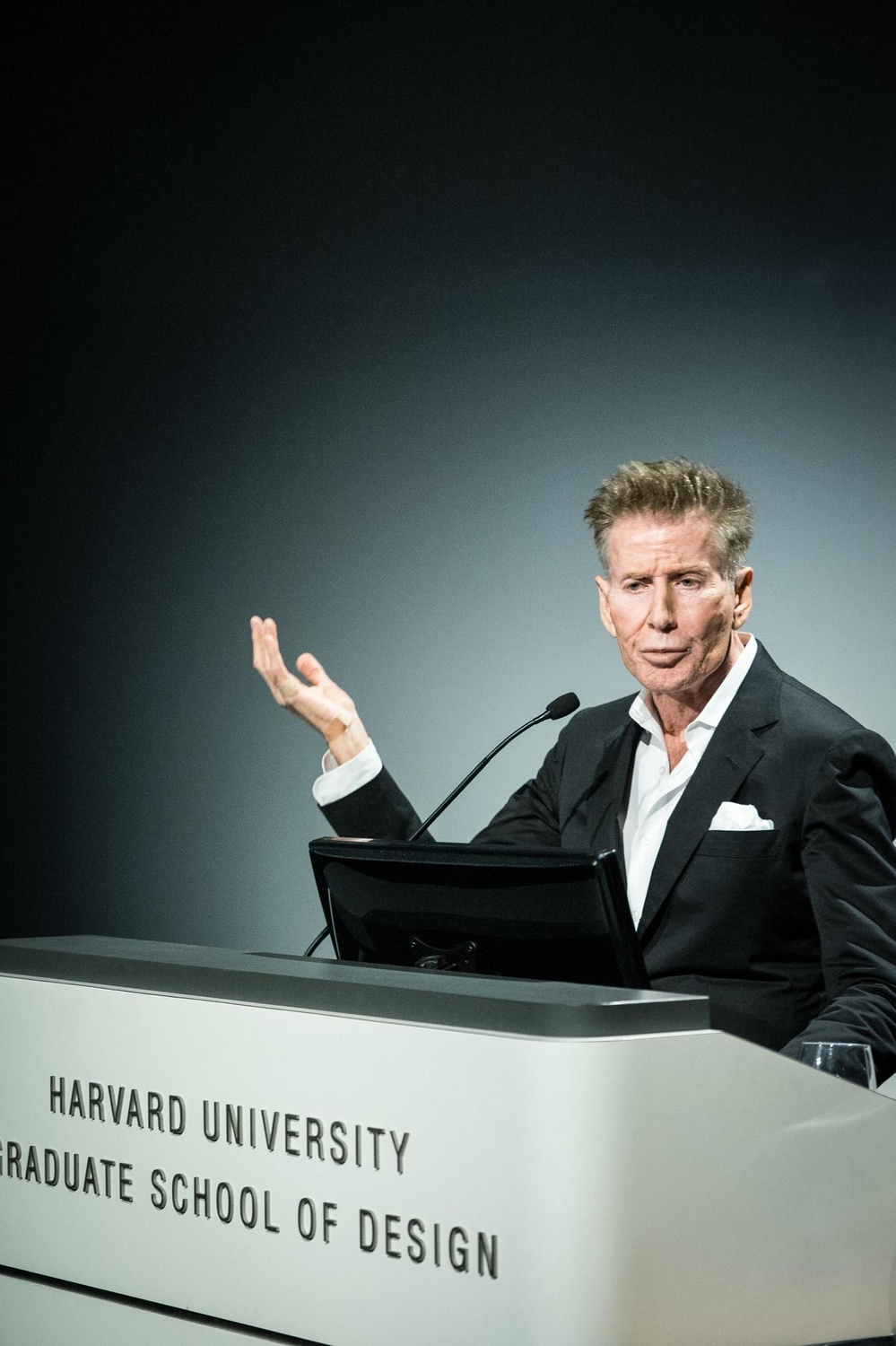 His name is displayed in the first slide of his PowerPoint, projected in familiar large white letters on a black background—a name that can be found on the waistbands of underwear, the straps of bras, and perhaps even a t-shirt or two: Calvin Klein. This Monday, Nov. 2, the famous fashion designer gave a lecture at the Graduate School of Design about the role of architecture in his work and the evolution of his ability as a businessman.

Klein was invited to the GSD as part of its Rouse Visiting Artist Lecture series. “We really see these as opportunities to bring other people of a creative process in other areas to tell us about their processes [and] their influences and what really feeds their desire to design or create or be an artist,” says Benjamin J. Prosky, Assistant Dean for Communications at the GSD.

According to Prosky, Mohsen Mostafavi, Dean of the GSD, met Klein at an event in New York last year and, after a good conversation, decided to invite him to Harvard to hold a lecture. “I think that you can draw a lot of comparisons between fashion design and architecture,” Prosky says. “There’s attention to materials; there’s attention to envelope, if you will. A jacket or clothing is an envelope as much as the walls of a building…and there’s a precision in making it all fit well.”

Prosky said that attendees of the lecture were mainly students of architecture and landscape architecture, so although Klein’s work is mainly in the realm of fashion design, he drew many connections to the students’ fields. Klein showed slides of his advertisements and photoshoots involving physical structure as well as pictures of the interior and exterior design of his own residences. “As an architect, you have to divide space in a way that is practical and really works,” Klein said as he showed a shot of a Calvin Klein storefront. The New York City store’s large windows, separated by white inset Ionic columns, are representative of the brand’s characteristic simplicity and minimalism, according to Klein.

As his work has often been revolutionary in its field, Klein said his motives were frequently questioned in the early stages of his career. “People used to ask me all the time if I was trying to create controversy,” Klein said. He showed slides of advertisements featuring models wearing only his jeans or in some cases or nothing at all—pictures that were considered scandalous when they were first released. “And the answer was no. I was working with talented people around the world, and they were really pushing the envelope.”

Throughout the lecture, Klein continuously emphasized how he had an innovative vision he wanted to attain. “I always like to find new talent,” Klein said. “I like to discover models…. I love working with people who are not famous and haven’t done lots of things. It gives me the opportunity to work closely and get what my vision is.” Furthermore, Klein noted that he accepted no compromises to achieve these artistic goals; he was stubborn with his work not only in fashion but also in the architectural design of his own houses and offices. “I don’t hand it off,” he said. “I work on every detail with every designer…. I think I know what I want.”

Prosky believes that students had plenty to take away from Klein’s lecture. “Creative people should hear from each other. They shouldn’t only hear from people specifically in their field,” Prosky says. “It’s a given that Calvin Klein is a successful designer and someone who’s had great design influence. They don’t need to learn how to design like Calvin Klein. What they need to see is how someone who obviously had a passion and drive for design made it their life, made it into a successful brand, and changed a whole field.”