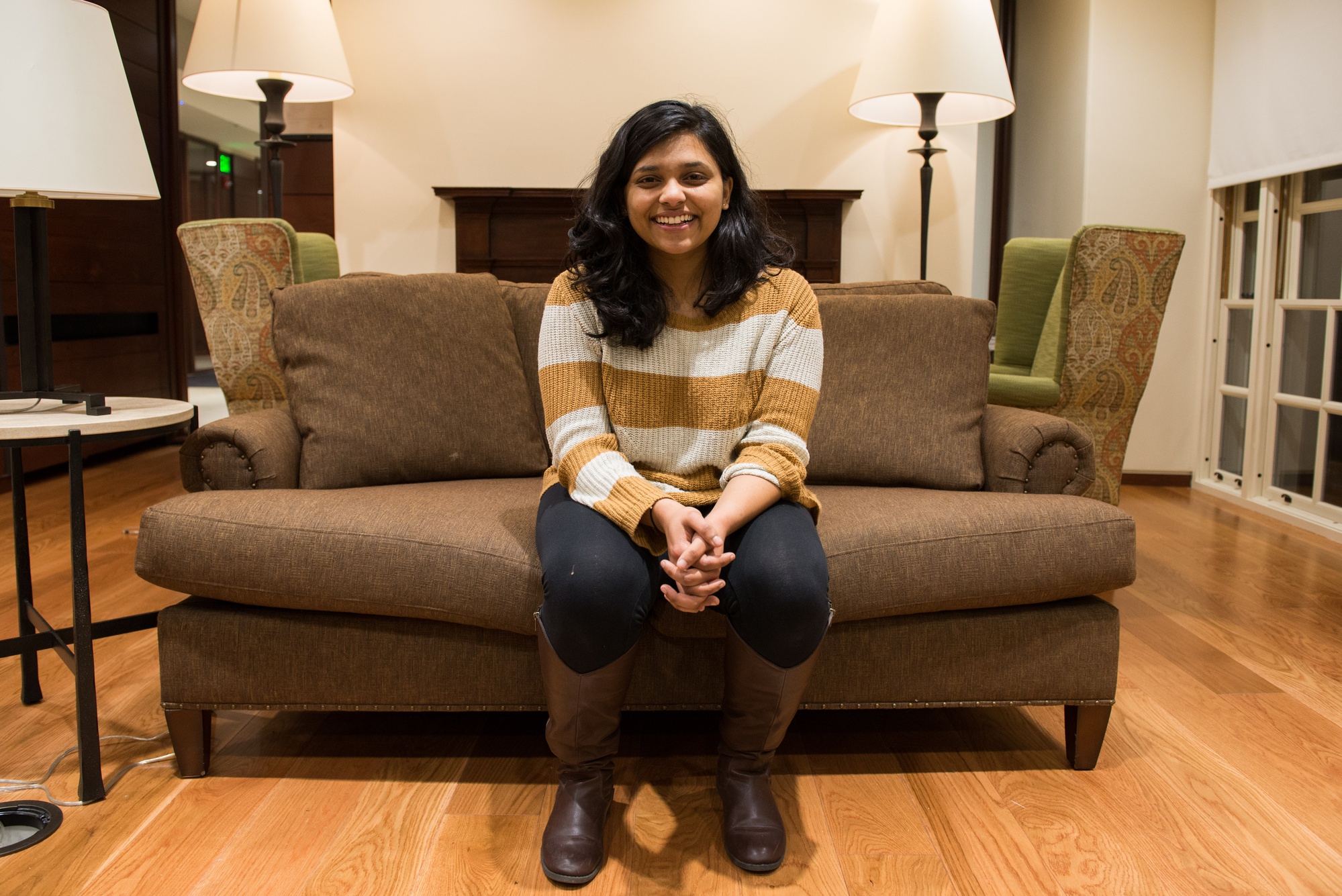 Shree Bose '16 poses in a Dunster Common Room. She prefers the courtyard, but it was a chilly night. By Alana M Steinberg

Some students barely pass their science requirements. Then, there's Shree Bose.
By Joshua A. Goldstein

Before meeting with Shree Bose’16, I Google her name.

The first site to appear is Bose’s own—shreebose.com—which chronicles her speeches, interests, and press coverage of her success. The second item? An article titled, “What Happens To Genius Kids After They Win The Google Science Fair?”

Delving further into my online research, I learn a few things: In 2011, at age 17, Bose, a former Crimson design editor, won Google’s inaugural Google Global Science Fair. The grand prize included $50,000 and a 10-day trip to the Galapagos Islands. She then went on a speaking tour to promote research to other youth, traveling to places as far as India and Korea, and speaking at forums including TEDx and Girlstart’s Annual Luncheon. Somewhere along the way she also met President Barack Obama.

Walking into Dunster to meet Bose, I anticipated that after so much media attention she would be prepared to recite a few well-rehearsed lines and call it a day. With a contagious smile and a healthy dose of self-deprecation, Bose shatters all preconceived notions.

Bose begins not with herself, but with the role her older brother, Pinaki, has played in her success. “When I was little...he would explain everything he learned in science class,” Bose says. “He was just so excited about it, and that made me excited. I fell in love with science.”

Bose was specifically drawn to cancer research (the topic she presented on at the Google Fair) because of her grandfather’s battle with the disease. Bose’s grandfather passed away during her freshman year of high school, concurrent with her first class in biology.

“I remember…on the board, there was a diagram of what cancer was supposed to be. It was like a lightning bolt striking a cell. And it made no sense. I was like, does that explain what’s making my grandfather so sick?” So, like me, Bose began online, watching YouTube videos and reading about cancer and therapy. After realizing that her questions resembled those shaping current research, she began contacting professors and found a mentor at nearby University of Texas Health Science Center, Alakananda Basu. 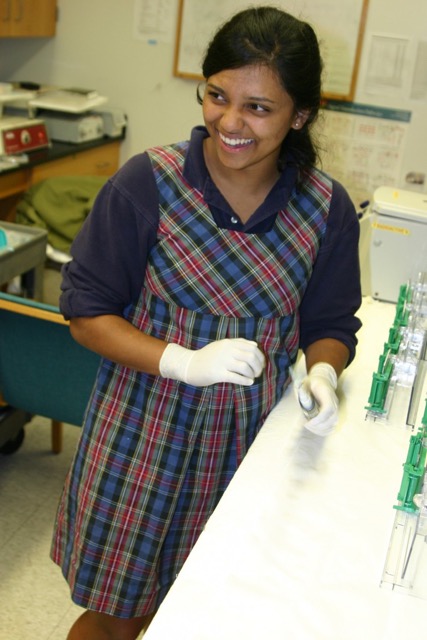 By Courtesy of Shree Bose

During her second summer under Basu’s guidance, Bose focused on how ovarian cancer cells become resistant to cisplatin, a common cancer treatment. Her findings suggest that introducing an inhibitor to the AMP-kinase protein into a cocktail with the chemotherapy may be effective in treating recurrent disease. Since then, Basu has continued to gather data in Bose’s absence so that “hopefully [it] gets pushed into the clinical realm.”

Bose recalls presenting this work at the Google Global Science Fair in 2011. Since “you can’t have cancer cells on public display,” she brought a statue of a cowboy to represent her Texan identity, she tells me. “But along the way, the head got broken off. So I had a headless cowboy with no display whatsoever, while the kid next to me had this fully functional prosthetic Lego arm.” Bose chuckles. “I thought to myself that we’re definitely not winning, so I was really surprised when I won. I thought they must have made a mistake.”

Two months later, she, along with the two other Google age-category winners, received an invitation to the White House. Bose says President Obama knew her by name and recalled the topic of her work. “It’s incredible to see how the leader of the free world cares so much about young people getting into science,” she notes.

Traveling around the world to share her story, Bose has embodied a similar care for youth involvement. She speaks of meeting a student in South Korea who was interested in neuroscience, but unsure of how to get involved. “So, I told him my story. A couple months later, I got an email saying that he started working in an Alzheimer’s lab. Right there, I realized that this is what I want to do.”

Since then, Bose and co-founder Mark Pavlyukovskyy have also created Piper (playpiper.com), a minecraft toolbox that allows kids to create and share their creations. They launched the Kickstarter in March, hoping to raise $50,000, and have received $280,000 in funding. Working with their hands, participants build the hardware themselves, and learn how currents flow and circuits work. “Piper is bringing together physical and virtual play,” Bose. says. “It’s a really cool way for kids to learn.”

Bose is writing a thesis on metabolism neurons, working in Gary Yellen’s Lab at Harvard Medical School. Ultimately, while she is unsure of her plans after graduation, one thing seems constant.

“I want to create things that can improve people’s lives.”