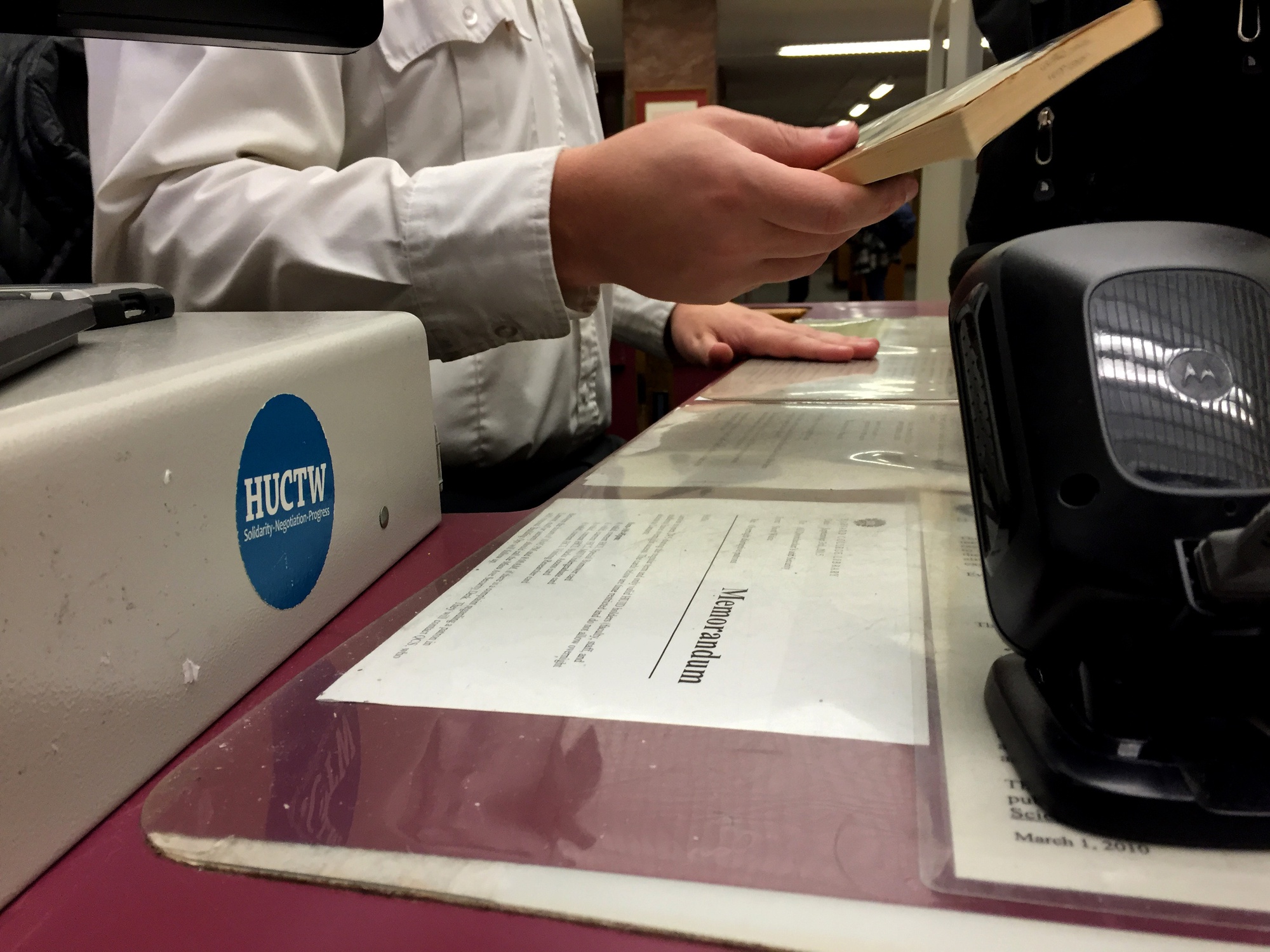 A sticker for the Harvard Union of Clerical and Technical Workers reads “Solidarity-Negotiation-Progress” near the bag-checking station at Lamont Library on Nov. 10. 2015.
By Emma K. Talkoff, Crimson Staff Writer

More than two and a half months after the expiration of their previous contract, members of the Harvard Union of Clerical and Technical Workers remain engaged in “very frustrating” contract renegotiations with the University, HUCTW director Bill Jaeger said Monday.

“The union has repeatedly and energetically put forward different frameworks for compromise,” Jaeger said. “The University is not expressing any willingness to agree to any kind of reasonable compromise.”

A sticker for the Harvard Union of Clerical and Technical Workers reads “Solidarity-Negotiation-Progress” near the bag-checking station at Lamont Library on Nov. 10. 2015. By Madeline R. Lear

Jaeger added that talks will likely be forced to continue in January after the winter break, meaning that employees will have worked for a year and three months without being eligible for wage increases.

University Executive Vice President Katie N. Lapp said in an emailed statement that the University and its largest union are “working through challenging issues in constructive discussions.”

“While important issues remain to be resolved, we have made significant progress,” Lapp wrote in a statement. “We are committed to continuing to engage in good faith negotiations for a contract that ensures HUCTW fair and competitive wages, health care and benefits, and also supports the core academic mission of the University.”

Lapp added that while talks continue, the union’s existing contract will continue to remain in place.

Jaeger said that the main hurdle for reaching an agreement continues to be health care, an ongoing theme of the talks which commenced in the spring.

Debate over University health care coverage has not been limited just to union employees in recent months. In the fall of 2014, a University-proposed restructuring of health care benefits for non-union employees inspired backlash from employees and faculty alike. Early this fall, the University announced that it would revise that approach for the coming year, maintaining the options introduced in 2014 but offering other plans as well.

Still, Jaeger said that HUCTW negotiators hope to work out a health care design that does not mirror the one currently in place for non-union employees.

“Our members are very strongly unified in their view that we can and we need to build a better health plan than what the University has designed for the non-union employees, that that’s actually a destructive plan that takes things in the wrong direction,” Jaeger said.

“Their proposals still present a total package which doesn’t seem affordable to our members,” Barbash said. “We’re still very worried that the kinds of proposals the University is making create a situation where some members may not go to the doctor because of the price, and that’s a serious concern.”

Barbash added that for some HUCTW members, higher priced health care could lead to a choice between skipping necessary care or taking on debt.

“We don’t feel that people should have to make choices like that, especially at a place like Harvard,” she said.