More Students Take Time Off Before Applying to Medical School 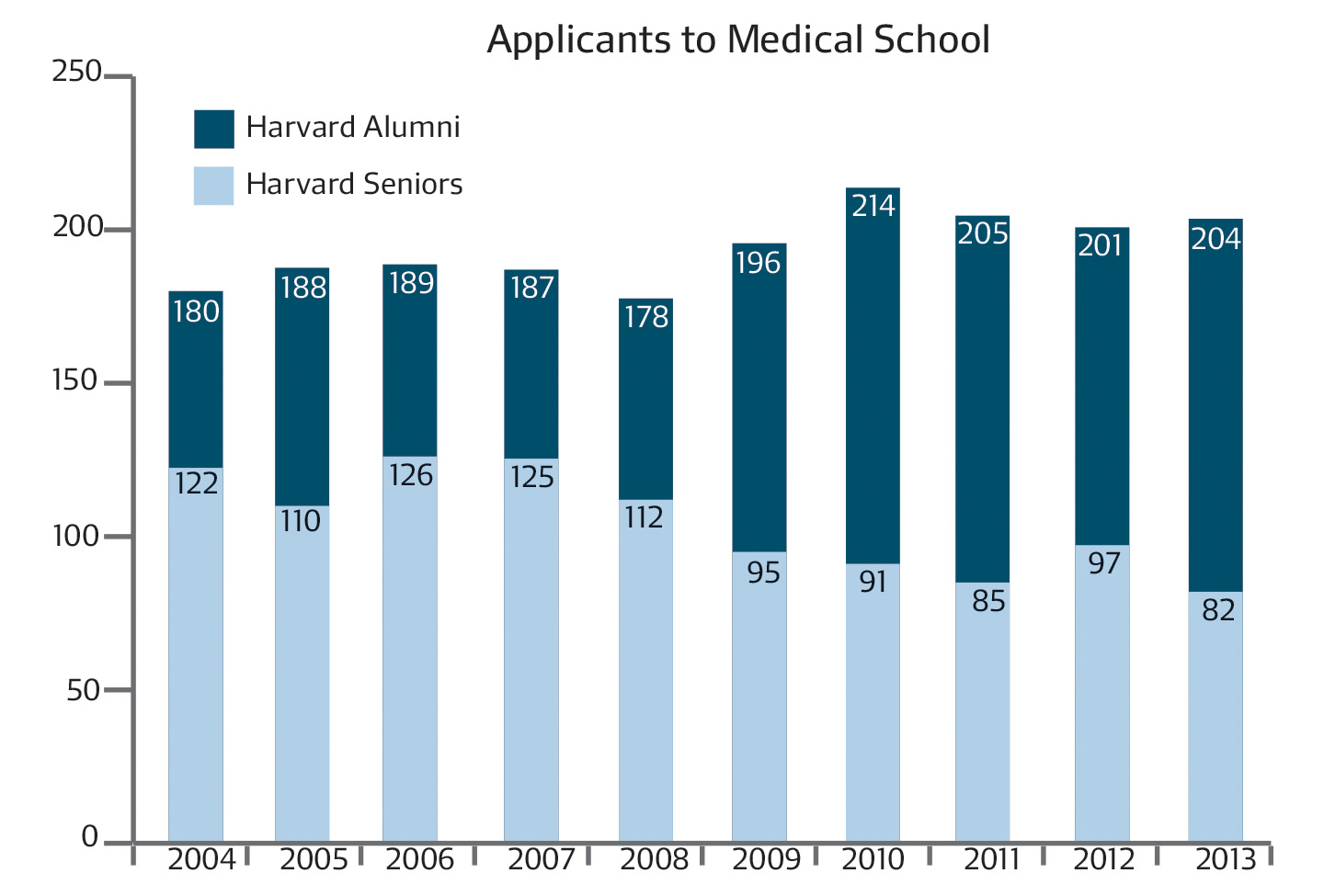 In 2004, out of the 302 Harvard applicants to medical school, about 40 percent were seniors aiming to continue schooling directly after graduation. The remaining 60 percent were alumni who had taken at least one year off, opting to pursue projects such as a travel fellowship, a different graduate degree like a Master’s or Ph.D., a research project, a teaching or community service experience, or paid employment.

According to data compiled by the Office of Career Services on Harvard undergraduate medical school admissions, the majority of Harvard applicants to medical school have been alumni rather than seniors since 1999. Over the past decade, the gap between the number of alumni and senior applicants has only grown, with 82 seniors and 204 alumni applicants in 2013.

Alumni make up an increasing proportion of medical school applicants as more students take time off before applying. By Caroline T. Zhang

“When I was a student, 80 to 85 percent of people at Harvard Medical School came directly out of college,” Mayer said. “I’ve been in the role of leading admissions for about 11 years. [When I first started], about 60 percent were coming out of college. Now, it’s about 35 percent.”

The data mark a shift in the perception of gap years before medical school as an opportunity to gain life experience before committing to the profession, to develop interpersonal and scientific skills, and to bolster an application’s chance of success, students and Medical School officials say. Still, despite active encouragement of behalf of both pre-medical tutors and advisers to take at least one gap year, some students still have reservations about delaying their education.

PUSHING FOR THE GAP

Pre-med tutors and advisers promote gap years to prospective doctors, saying alumni applicants can have an advantage in demonstrating to selection committees their readiness and dedication to the medical profession.

Avik Chatterjee, a Dunster House pre-med tutor, taught chemistry at a high school for two years through Teach for America prior to starting medical school. He called the experience “exceedingly valuable” and “something [he] wouldn’t exchange for anything.” According to Chatterjee, holistic admissions at medical schools like Boston University and Mt. Sinai can emphasize applicants’ life experiences over test scores, which would benefit students who take gap years.

“From my own experience supervising medical students and residents, trainees who have a few years of additional life experience tend to come across as more mature, professional, and interesting,” Chatterjee wrote in an email. “I've heard the same thing from senior faculty who sit on admissions committees.”

Mayer echoed Chatterjee’s sentiments, particularly noting that travel during time off can broaden students’ perspectives and indicate to selection committees a greater potential for success in a future medical career.

“I firmly believe that sort of [travel] experience makes it easier for them to relate to a larger population of patients,” Mayer said.

Matthew F. Basilico, a pre-med tutor in Adams House, agreed that the motivations for taking a gap year are consistent with desirable qualities in a potential doctor.

“If healing is about empathy and science, and empathy is about understanding human experience, then it makes sense that those most interested in medicine—and those most attractive to medical schools—will seek out broad human experience before entering the most technical portion of their training,” Basilico wrote in an email.

In addition, some peer-to-peer advisers have advocated for gap years, with Justin S. Reynolds ’17, director of the Harvard Pre-Medical Society’s Peer Mentoring Program, considering the endeavor a “great idea” that he “absolutely” recommends. Reynolds himself took three gap years between his freshman and sophomore year at the College to work as a medical assistant in an ophthalmology practice.

“In the fast-paced progression from being overachieving high schoolers to ever-catered-to Harvard students, pre-meds often lack the opportunity to mature in the less tangible ways necessary to become good doctors,” Reynolds said.

According to Mayer, the increasing proportion of alumni medical school applicants is not limited to Harvard or the Medical School. At the University of Pennsylvania School of Medicine, the majority of applicants are also college alumni rather than graduating seniors.

“We see that pattern even more from schools other than Harvard,” Mayer said. "There are some schools that advise applicants to do something for a year or so.”

On the other end of the conversation, College students have increasingly accepted gap years between their undergraduate and medical school educations as common practice that can give applicants more time to pursue other endeavors or polish an application with little repercussions for the delay.

According to Amarachi I. Erondu ’15, a pre-health peer liaison, students hear the message that time off does not hinder an applicant’s chance for success.

“The stigma around taking a gap year is dissipating,” Erondu said. “Med schools are trying to make it clear that they accept alumni.”

Students have said the increased acceptance for taking a gap year better enables them to consider it as an option upon graduation.

“I have gotten the feeling from speaking with upperclassmen as well as pre-med advisers that it has become much more common to take a gap year before medical school,”  Yasmin Siraj ’18 said. “I do not know if I want to take a gap year or not, but now I know it is an option that is very much accepted in society today.”

Erondu also noted that taking gap years can allow for “a nice break” after four years of pre-med education, what she called an “attractive option.”

“It’s a great way to space out your pre-med requirements,” Erondu said. “You can take one pre-med class a semester.”

Harvard alumni were accepted to medical school with significantly lower GPAs than Harvard seniors, an average of 3.59 for alumni and 3.77 for seniors in 2013, according to admissions data compiled by OCS.

Assistant Director of Premedical and Health Careers Advising Sirinya Matchacheep said that while taking a gap year cannot directly make up for a lower GPA or MCAT score, individuals can take post-baccalaureate courses to boost their academic standing.

In the face of institutional and peer recommendations for time off, the decision to take time off still stands as largely variable from person to person.

For students who want to go straight to medical school, have strong grades and accomplishments, and are not considering any other endeavors, applying in their junior year would be the best option, according to Chatterjee.

Grant A. Sprow ’16, who intends to apply to medical school during his senior year, said he decided on medicine early in his college career.

“I just didn’t feel the need to take time off between college and medical school,” Sprow said. “A lot of other people have other interests and want to take the opportunity to pursue another interest and get work experience.”

Ved V. Topkar ’16, who hopes to pursue a M.D./Ph.D. program that typically takes about eight years to complete, said that he did not have time to take a gap year considering the program’s length, but strongly considered a gap year when he only planned on achieving a M.D. degree.

“I saw a lot of my classmates here having taken gap years before or during college careers...grow as individuals,” Topkar said. “Having unstructured free time to help yourself grow as a person...was the main draw for me.”

In the end, Mayer said that students should not feel pressure for either continuing straight to medical school or taking a gap year.

“What’s so important is that there is good mentorship,” Mayer said. “People are leaving the uterus, the womb of college, and now need to make some decisions. We all mature at different rates.”