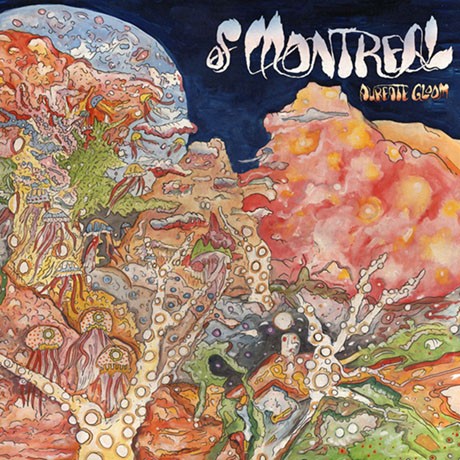 In the past, of Montreal has displayed remarkable stylistic variation, creating everything from the effervescent innocence of their 1997 debut “Cherry Peel” to the blues-rock sound of 2013's “Lousy with Sylvanbriar,” all while giving all of their music distinctive psych-pop flair. However, with their most recent release, “Aureate Gloom,” this wellspring of stylistic creativity appears to be drying up. The album comes off as if the group crammed some of their funkier mid-career sounds into a continuation of their recent bluesy streak and blindly hoped that the result would be compelling.

Of Montreal has been consistently heading towards darker lyrical content since their 2004 release of “Satanic Panic in the Attic,” a trend “Aureate Gloom” continues. The album’s overall impression, reinforced by occasional religious imagery, is that of a confessional. Gentle musings that suggest a window into lead singer and writer Kevin Barnes's internal monologue give way to starkly emotional lyrics; he screams, “My heart is a mess / The ruins depressed / The shrill of our withering depths.” Barnes's talk-singing is viscerally effective for these passages of raw emotion, but it becomes painful when applied to long strings of purple prose and risks overpowering the more vocally and melodically diverse sections of the album. The despondency can also be excessive; while a hint of melancholy added maturity to some earlier albums, “Aureate Gloom” lacks the usual bits of delightful twee that could balance out the overwrought despair.

For an album recorded directly to tape the sound is surprisingly polished, especially given how complex—almost to the brink of disorganization—some of of Montreal's work can be. But achieving this polish seems to have come at the expense of creative freedom. None of the tracks on “Aureate Gloom” are notably terrible, but the group’s mid-career albums offer much the same fare with more vitality and sparkle. Even some of the songs that start with panache—such as “Apollyon Of Blue Room”—fade as they go on. Of Montreal has never shied from long and repetitive outros, but, as nearly every track on “Aureate Gloom” boasts a minute-long tail of two repeated lines, they inevitably begin to drag. Add this to the fact that most of the tracks rely on very similar combinations of straightforward rhythmic vocal sections with more ethereal segments focused on elaborate instrumentation, and the result is a somewhat monotonous collection that is perfectly good as background music but doesn't really merit focused listening.

There are, of course, a few exceptions, the tracks that ultimately save “Aureate Gloom”  from complete mediocrity. “Bassem Sabry” provides a strong opening for the collection. Named after the late Egyptian activist and journalist, the track may be of Montreal's most overtly political work to date. It proclaims that “every leader is a cellophane punk” and laments that “people disappear on the wrong side of this revolution / When they resurface, there's a black hole in their skull.” Its brisk pace offsets the lethargy of some of the later tracks, and it manages to achieve something that even some of the group's best work does not: it is infectiously catchy. Where “Bassem Sabry” is lyrically energized, “Empyrean Abattoir” is instrumentally engaging. The track beautifully juxtaposes a bright, bouncing beat with haunting glissando vocals, the dominant melody occasionally subsumed by moments of shimmering cacophony. It builds to more intense vocals, creating complexity without feeling scattered.

The final song, “Like Ashoka's Inferno of Memory” encompasses everything that “Aureate Gloom” could have been. It deftly explores the myriad vocal and instrumental styles that of Montreal so loves to combine; while on much of the album this mix of styles makes individual songs feel disjointed, this track makes these transitions effortlessly. By turn, “Like Ashoka's Inferno of Memory” offers everything: airy melodies, intense beats, soft vocals, talk-singing (but not to excess), hazy electronic sounds, crystal clear instrumentals, and clever lyrics. Had every track been so skillfully put together, “Aureate Gloom” would have been a stellar showcase for of Montreal.