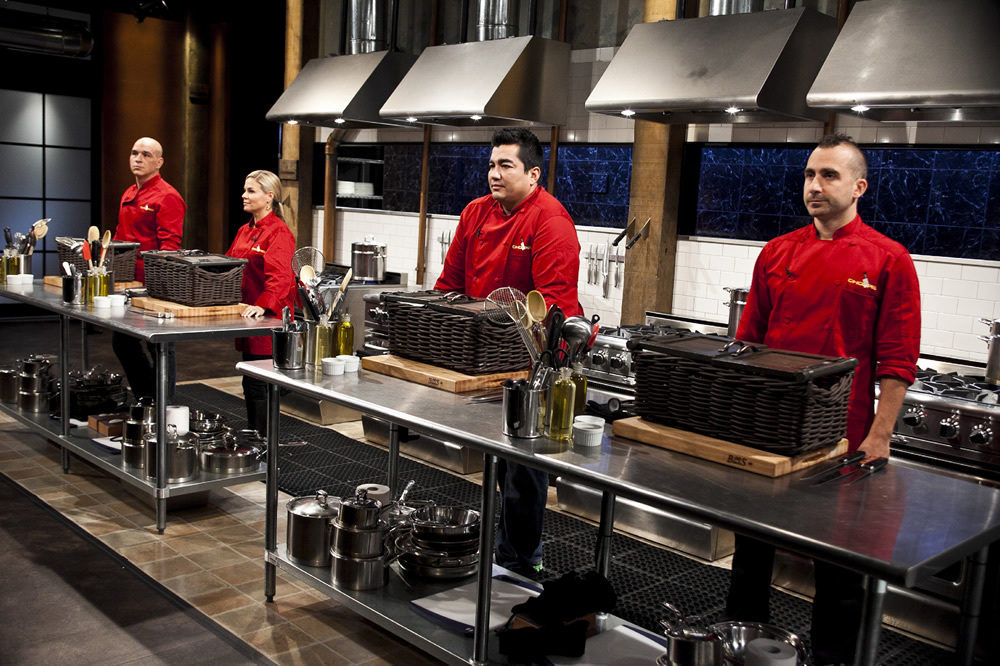 The phrase “reality-based cooking television series” does not exactly inspire confidence in artistic quality. And perhaps it shouldn’t. Reality TV is notoriously bad, and cooking shows hardly enjoy a high reputation either. That said, few media are without artistic potential, and that potential has been realized in the cooking show “Chopped.”

The game-show rules of “Chopped” are simple enough. There are four contestants; they cook three courses; after each course, a panel of judges decides whom to eliminate until only one winner remains. The show’s distinctive twist is that each course must feature an odd basket of ingredients. So, for instance, the pilot episode required its contestants to cook an appetizer containing baby octopus, bok choy, oyster sauce, and smoked paprika; an entrée with duck breast, green onions, ginger, and honey; and a dessert with prunes, animal crackers, and cream cheese.

Now, here’s where most shows would go so terribly wrong and “Chopped” goes so terribly right: there is nothing else to the show. They could have added complexity to the contest by allowing contestants to make deals with one another, cheat the system somehow, have different central ingredients or access to different supplemental ingredients (everyone on “Chopped” uses the same food pantry to flesh out their courses). This is what most other game shows do: add complexity so that contestants aren’t all playing quite the same game. But “Chopped” avoided this trap.

The producers could have made the show all about the personalities of the contestants, by giving the contestants lots of time to talk about and among themselves, to make various bids for the audience’s affections, etc. Instead, Contestants on “Chopped” wear stunningly dull gray uniforms and mostly just talk about the food they’re preparing.

Admittedly, “Chopped” could be purer in this regard. They do allow contestants to talk about their families and personal struggles a bit, a diversion that ends up somewhat muddying the waters. For the most part, however, “Chopped” is about the merits of its contestants not as people but as chefs.

This is where the show’s purity shines through. By paring back the fluff and distracting elements generally used in television to keep the viewer entertained, “Chopped” becomes a cooking show about—imagine that!—cooking. It also avoids taking the nuts-and-bolts approach of cooking shows that actually attempt to teach their viewers how to cook. Although “Chopped” spends plenty of time documenting technique, the show is less about how to cook and more about what to cook.

The incredible part, for the viewer, is in seeing how differences in culinary background and preferences lead different chefs to take the exact same challenge and spin off in wildly different directions. It is a rare “Chopped” round when any two dishes look even somewhat similar. Even a single episode of “Chopped” is an impressive demonstration of this great variety. Taken altogether, the show (currently at 23 seasons) is a breathtaking monument to the infinite potential of art.

What other show, reality TV or otherwise, is devoted so exclusively to the thought behind the creation of art? There is none. The closest parallel one could draw is to televised music contests like “The Voice” and “American Idol,” which violate all the previously stated guidelines for simplicity and purity so badly that, by the end of an episode, the viewers barely have enough brainspace left to think “(S)he sounded nice,” let alone contemplate and engage in the creative process themselves.

By cutting away almost everything but the essentials in its production, “Chopped” frees itself to begin reaching toward infinity. “Simplicity,” Leonardo da Vinci is reported to have said, “is the ultimate sophistication.” He would have been a fan of “Chopped.”