Harvard Leaders Stay Quiet on Divest, Even During 'Heat Week'

Analysis: Harvard leaders run out the clock as protests continue 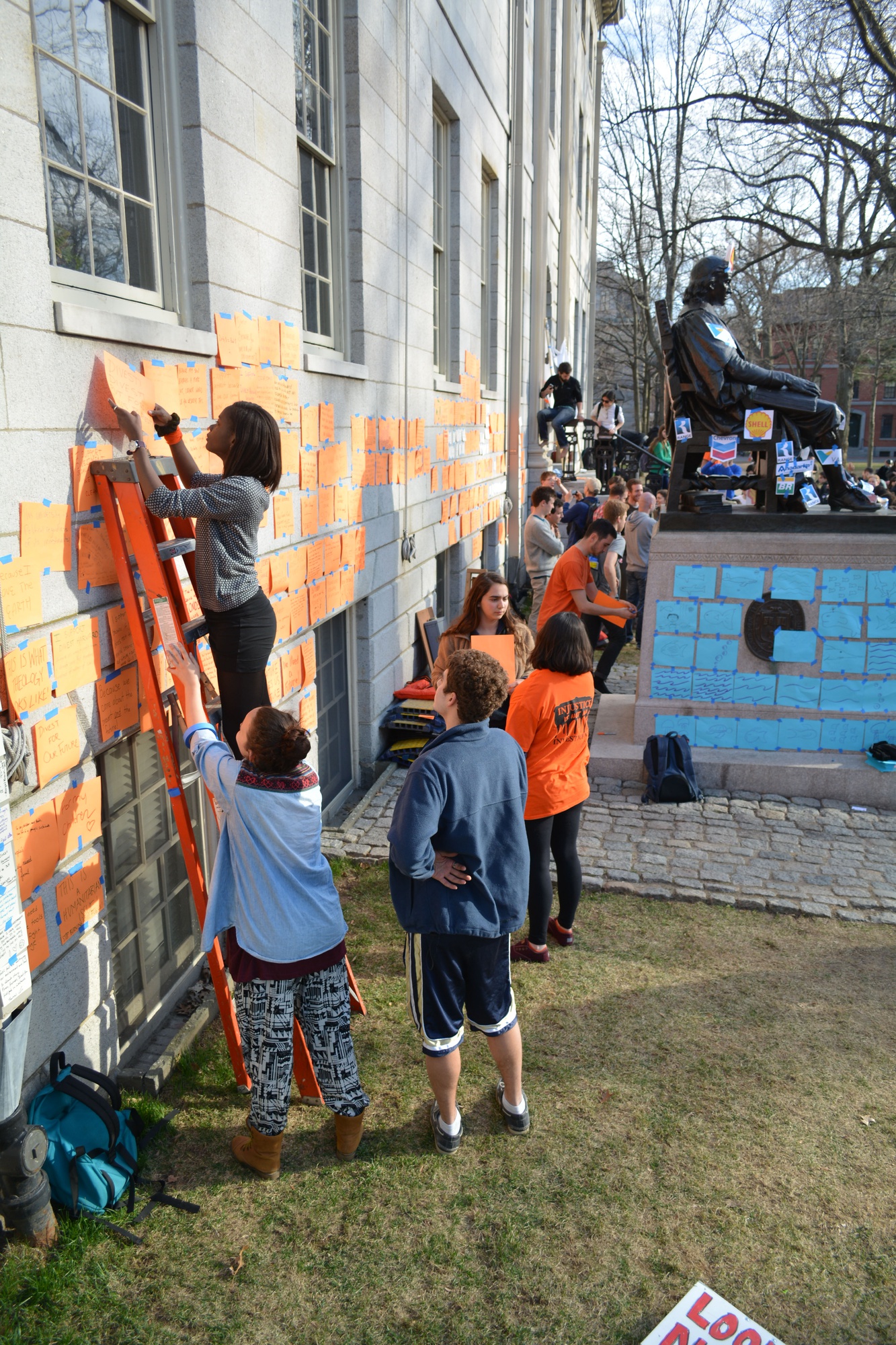 While other protesters lined up along the perimeter of University Hall, a student hangs up messages supporting the Divest movement written on orange sheets of paper. In the background, pictures of oil company logos are taped on the statue of John Harvard.
By Mariel A. Klein, Crimson Staff Writer

Protesters from environmental activist group Divest Harvard have done their very best to get administrators’ attention this week.

More than four days into its "Heat Week" of protests demanding that Harvard divest its $35.9 billion endowment from fossil fuels, the activist group has blocked the staff entrances to Massachusetts Hall, where Faust keeps her office, and also targeted University Hall and the Harvard Alumni Association. 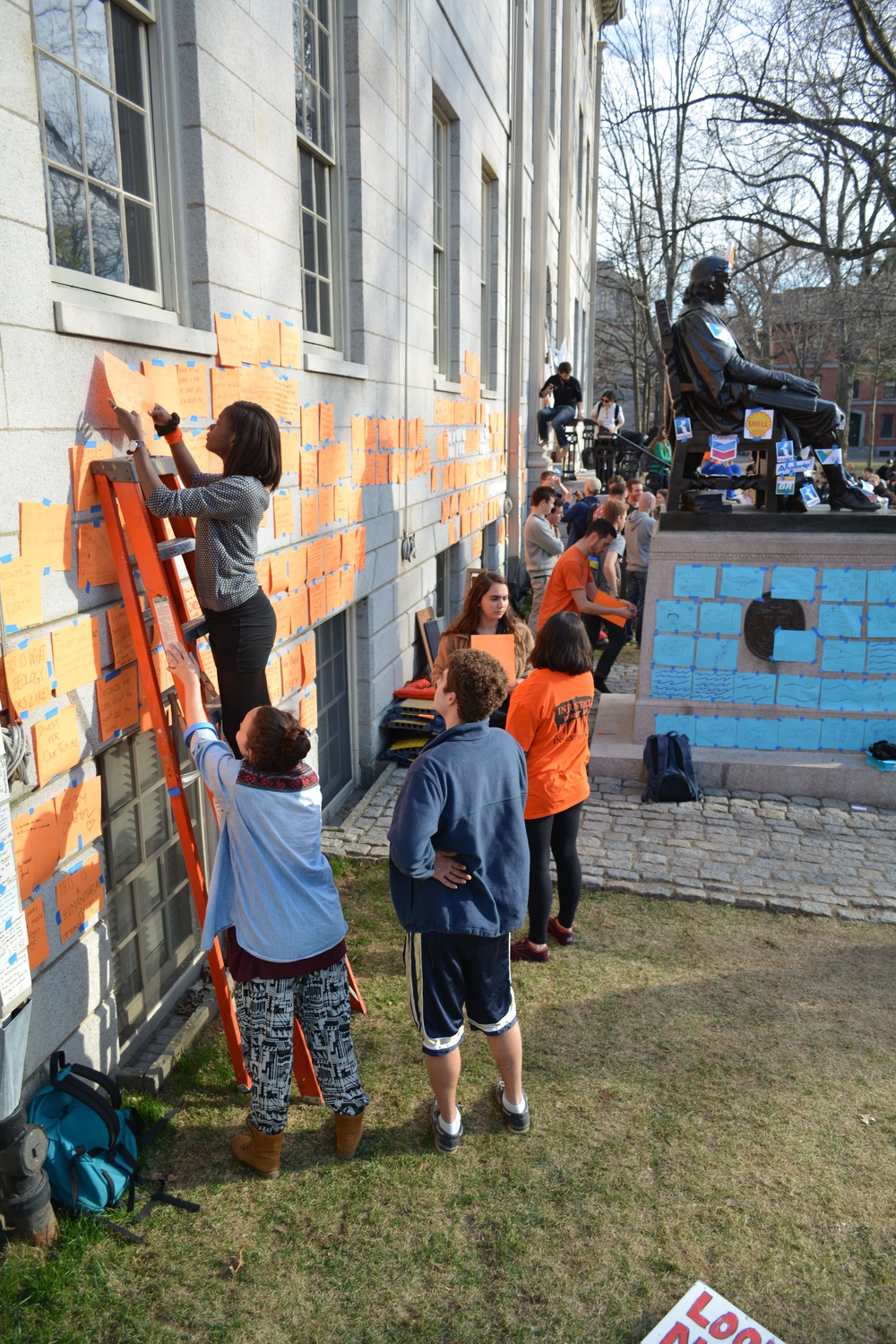 While other protesters lined up along the perimeter of University Hall, a student hangs up messages supporting the Divest movement written on orange sheets of paper. In the background, pictures of oil company logos are taped on the statue of John Harvard. By Y. Kit Wu

Last May, a Divest Harvard member, Brett A. Roche ’15, was arrested as he blocked a door to Mass. Hall. The group’s newest exhibition of civil disobedience has not unfolded the same way. So far, police and protesters have interacted amicably, and many University leaders have simply accepted the inconvenience, skipping the complaints and instead deciding whether to open their laptops in Widener Library, Starbucks, or Au Bon Pain.

"We've been very flexible," said Faculty of Arts and Sciences Dean Michael D. Smith, who stopped by to greet the protesters en route to the library on Thursday morning. "I’m just wandering around campus; it's good exercise."

Dean of the College Rakesh Khurana has also visited the protests and talked with students. Like Smith, he was relocated largely without complaint.

The most visibly inconvenienced has been Faust, who normally walks unencumbered through Harvard’s campus but this week has been preceded and accompanied by a swelled protective detail of officers from the Harvard University Police Department. And yet despite the changes in routine, Faust waited until Thursday to address the protests, offering the demonstrators a meeting on the condition that they end their blockade. 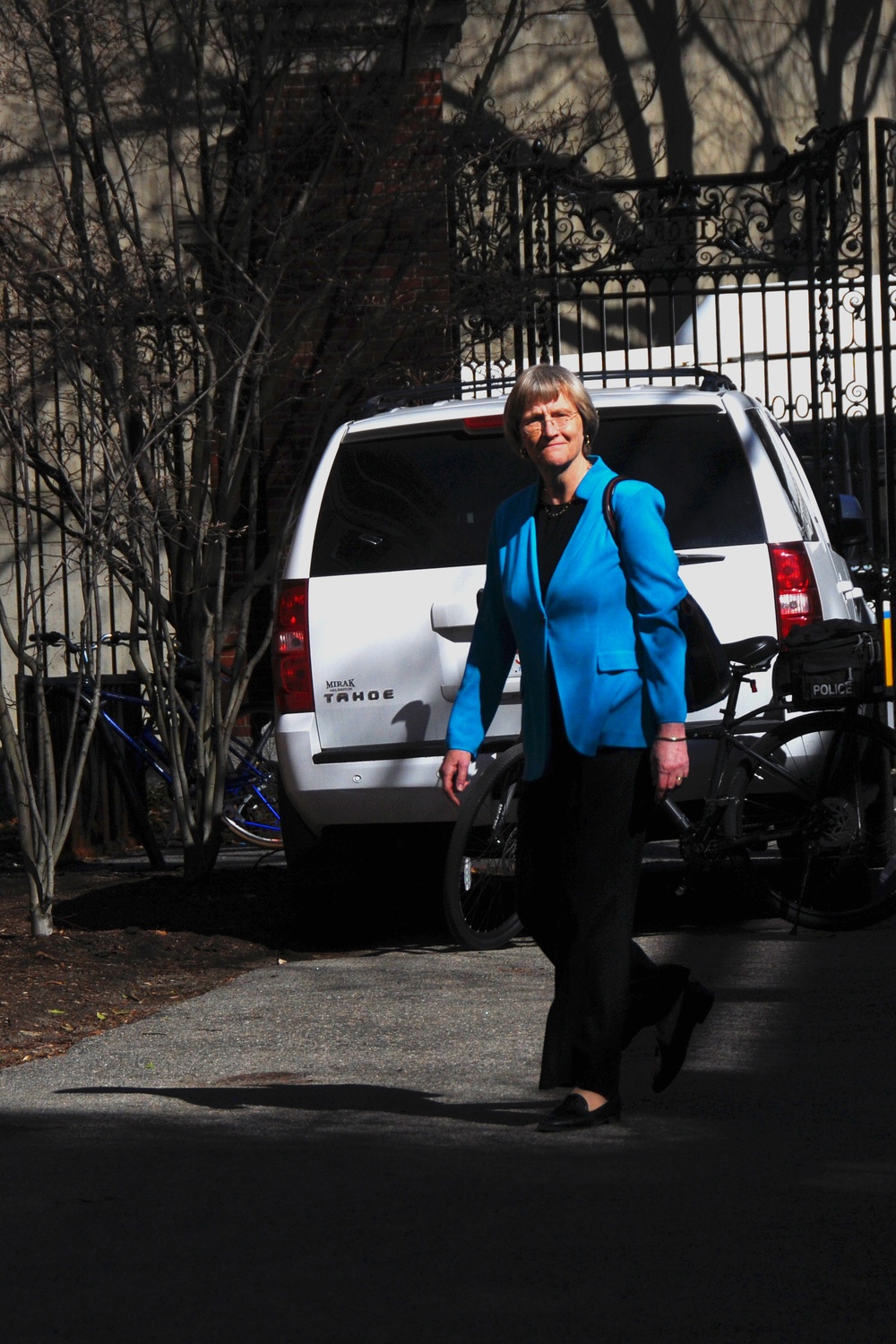 University President Drew G. Faust enters Emerson Hall, where members of the student activist group Divest Harvard attempted to confront her before she introduced a lecture on Wednesday afternoon. Security personnel had placed guard rails between Loeb House and the lecture hall. By Thomas W. Franck

The response is not exactly what Divest Harvard was looking for when it announced its planned "Heat Week" of protests. Chloe S. Maxmin ’15, the group’s co-founder, responded to Faust’s email by requesting a meeting with Faust as well as the Harvard Corporation “to formally negotiate divestment.”

Faust wrote back Thursday night and criticized the group for "the substantial disruption your activities have caused." Faust wrote, however, that she remains willing to meet with the protesters.

In an interview Thursday night, Maxmin called Faust’s original message more of the same and said the group was not satisfied.

“We’ve been to Faust’s office hours many many times over the past three years, and we’ve valued those opportunities to engage with her, but those conversations have not been productive,” Maxmin said on Thursday night. “It is frustrating to hear the same statement and to have the same conversation over and over again.”

So far, however, "Heat Week" has unfolded without the change in message Divest Harvard seeks. The group’s civil disobedience, moreover, has not caused Harvard’s police to react in the way officers did when they arrested Roche last year and prompted Divest Harvard to celebrate the then-junior in public statements as “the first student arrested in fossil fuel divestment history.”

—Noah J. Delwiche contributed to the reporting of this story.