‘The Fishermen’ Will Reel You In

“The Fishermen” by Chigozie Obioma (Little, Brown and Company)

Some kinds of truth are absolute. Two plus two is four, time moves forward, your brother is always your brother. More complex are the subjective truths—love, hatred, fear, and so on. Far more difficult still is the third sort of truths: things that become true the moment that we lend them the weight of our own credence. “The Fishermen,” Nigerian author Chigozie Obioma’s debut novel, is a searing, incandescent exploration of the repercussions that come from acting on such a belief. Using the story of four young brothers as a magnifying lens, Obioma delves into the ways in which belief can build the deepest of bonds, only to eviscerate them in an instant. 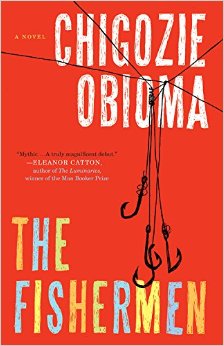 By Courtesy of Little, Brown and Co.

Obioma’s story takes place between 1995 and 1996 in the Nigerian city of Akure, where Ikenna, Boja, Obembe, and Benjamin are the four eldest in a family of six children. Benjamin, only nine years old at the beginning of the story, is Obioma’s chosen narrator; his recollection of the story, while keenly perceptive and often poignant, always reads authentically as that of a child, a difficult feat. Ben is party to the deterioration of the once-close relationship between his oldest brothers, Ikenna and Boja, who at 14 and 13, respectively, are separated by only 11 months in age. A catastrophic chain of events begins when the town’s wildly sinister madman, Abulu, prophesies to Ikenna that he will “swim in a river of red but never rise from it again” and that his life will be taken by a fisherman. The brothers call themselves fishermen, as they often sneak down to the dangerous Omi-Ala river to fish; in a striking twist, Ikenna takes the prophecy to mean that Boja will murder him. While this plot choice had the potential to seem extreme, Obioma so wonderfully casts the events that they come to feel natural, even inevitable.

Through Obioma’s rich figurative writing—for example, Ben describes his father’s lectures as leaving “every word tacked nine-inches deep into the beams of our minds”—the reader is able to watch this bitter seed take root in Ikenna’s heart. Obioma writes of Ikenna’s obsession as an uncontrollable wild animal that “had gone berserk and was destroying his mind with the ferocity of madness, pulling down paintings, breaking walls, emptying cupboards, turning tables until all that he knew, all that was him, all that had become him was left in disarray.” His withdrawal into his self-constructed prison is depicted with artful restraint. At first, Ikenna becomes restless, irritable; soon after, he begins to eat alone and avoid his siblings; after that, he lashes out, antagonizing Boja and trapping them both in a spiral of increasingly genuine enmity. That spiral comes to a brutal, shocking conclusion during a particularly violent fight between the two, when Boja fulfills Abulu’s prophecy and fatally stabs Ikenna.

For days after the murder, Boja is nowhere to be found; Ben’s description of these days and their culmination are some of the most emotionally gutting passages of the work. “After four torturous days...he showed himself,” he explains to his listener. “Perhaps Boja saw [his mother’s grief] and pitied her and the rest of us, too. Or, perhaps he was merely forced to reveal himself because he could no longer hide.” These lines seem to lead to a confrontation between the family and Boja—yet no such confrontation occurs. Boja, it is revealed, is dead, having drowned. After killing Ikenna, he threw himself into the family’s well, “one of the deepest in the district”; it took his body four days to float to the surface. Ben’s lack of comprehension of the final and absolute nature of death is a powerful, painful reminder that, despite all he’s seen, he is still only a child. In the deaths of Ikenna and Boja, Obioma reveals the true power of his writing; it takes him no more than 25 emotional, lyrical pages to lay out a family’s tragedy, a component that easily could have been the novel’s entirety.

Obioma continues to dig deeper into this cycle of misplaced belief and destruction. Obembe and Ben, realizing that their brothers’ deaths would not have occurred had Abulu never uttered his prophecy, convince themselves that Ikenna and Boja cannot rest until revenge is won. Their plots to kill Abulu begin as laughably childish fantasies—such as throwing lots of rocks at him—yet grow steadily darker and more lethal, with horrible results. It is a reflection of the three-dimensionality with which Obioma realizes his characters that these propositions, instead of feeling incongruous or exaggerated, come across merely as understandable and deeply sad.

As the bonds between these formerly inseparable brothers disintegrate, Obioma’s message becomes increasingly clear. Looking back on the aftermath of Ikenna and Boja’s death, an older Ben explains, “I have now come to know that what one believes often becomes permanent, and what becomes permanent can be indestructible.” The meaning of a word or an event is that which we ascribe to it, Obioma asserts. Coming to believe that something is true not only has the power to change one’s reality but also to invade and poison one’s memories. For Ikenna, even the earliest recollections of childhood have been warped by pain and paranoia. In their penultimate conflict, he accuses Boja,“That is why I’m not surprised when you now confess that you hate me; you always have.” Through this wrenching parable, Obioma displays the genesis of such divisory beliefs and their eventual, devastating consequences.

—Staff writer Lien E. Le can be reached at lien.le@thecrimson.com.