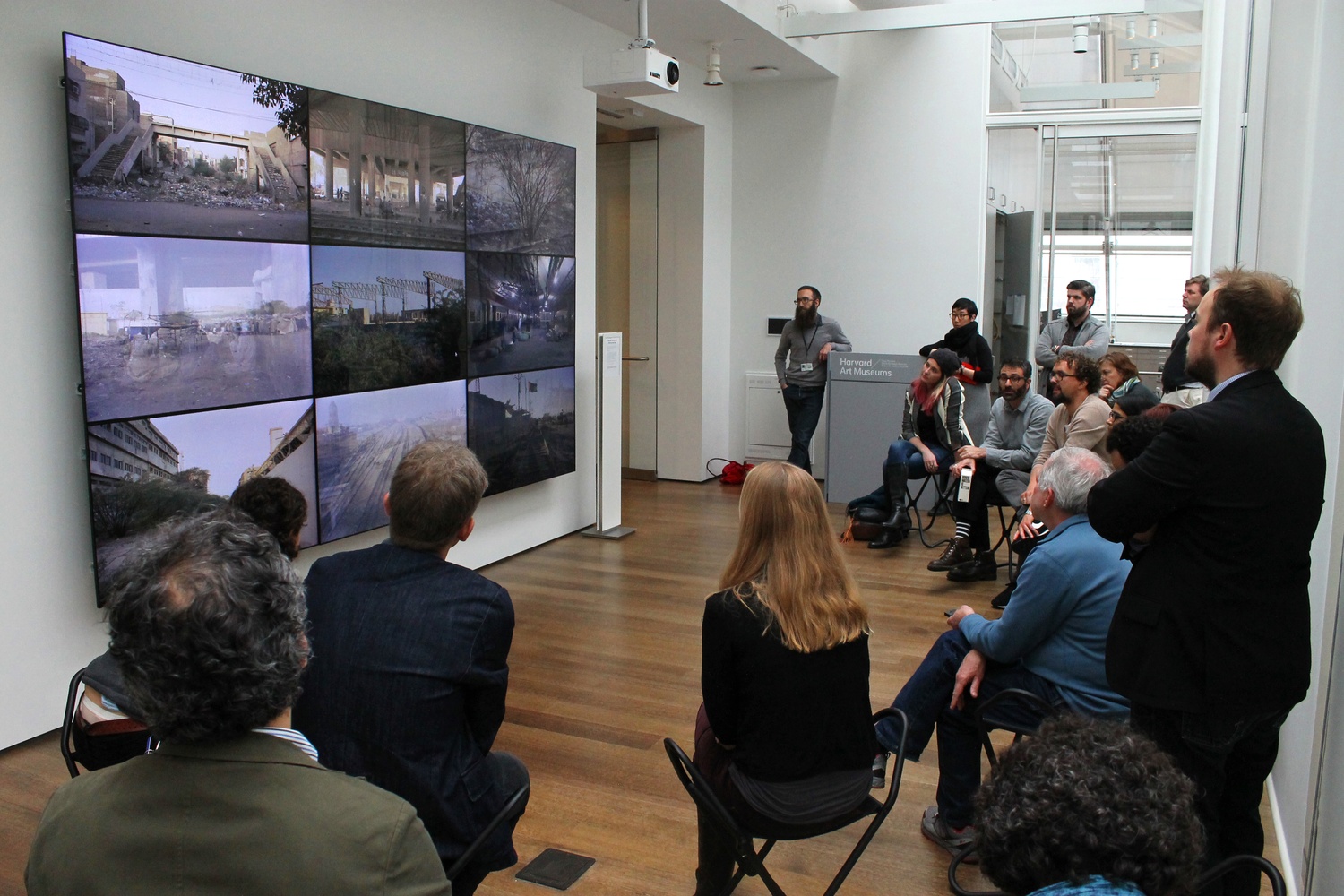 At a Cambridge Science Festival event, Ivan Sigal, a fellow at Harvard’s Berkman Center for Internet & Society, answers questions on the formation of his documentary and installation project that shows the Karachi Circular Railway in Karachi, Pakistan, which is displayed at the Lightbox Gallery of the Harvard Art Museum By Jennifer Y Yao
By Lara C. Tang, Contributing Writer

The annual Cambridge Science Festival, which features events such as the Science Carnival, Robot Zoo, and an exhibit on Black Holes, began last Friday and will run through this Sunday.

Sponsored largely by science-based companies like Biogen Foundation and Novartis, the festival is a collaboration between Harvard University, the MIT Museum, the City of Cambridge, the Museum of Science, and the Cambridge Public Schools, and the Cambridge Public Library. This Wednesday, Harvard will host the festival’s Sustainability Fair in celebration of Earth Day.l. The event will highlight sustainable living and organic landscaping and will take place in the Science Center Plaza.

According to P.A. d’Arbeloff, the festival’s director, undergraduates from area universities, including Harvard, are heavily involved in the festival’s activities.

On Wednesday, the Harvard Ed Portal will host Science Meets Art, an interactive event in which Harvard undergraduates will host activities geared toward exploring the intersection between science and art. One part of “Celebrating Einstein,” a series of events commemorating the one hundredth anniversary of Einstein’s general theory of relativity, brings sixty undergraduates to thirty different middle and high schools in the area for physics-related workshops and activities, according to d’Arbeloff.

John R. Durant, Pforzheimer House co-master, said that he initiated the festival after moving to Massachusetts from the United Kingdom, where such events were more common.

“What I first noticed when I came here from England was that there were very few science festivals,” Durant said, “At that time, they were very well-known in Europe, and I was wondering where they were in the United States.”

D’Arbeloff said that the event has grown considerably since its founding in 2007, when around 15,000 people attended.

Durant said that he expects over 56,000 people to attend this year’s festival.

The festival has an interdisciplinary focus and attracts participants of all ages interested in science, technology, engineering, arts, and math. The festival includes workshops geared toward adults, like a beer-brewing science workshop, while others, such as the Robot Zoo, are targeted at younger children.