Canyon S. Woodward '15 of Divest Harvard hangs a banner during a protest in Massachusetts Hall. A group of students rushed into the building that houses the University president's office this morning.
By Mariel A. Klein, Crimson Staff Writer

The “Harvard Heat Week” protest, which organizers originally promoted as a sit-in, aims to bring students, faculty, and alumni to Harvard Yard to demand that the University divest its $35.9 billion endowment from fossil fuels. Divest member Ben D. Sorscher ’18 said the protest would not disrupt the 14 freshmen who live in Mass. Hall and that Divest members had individually notified each freshman of the plans and scheduled one-on-one meetings with them.

Protesters intend  to form a circle around  Mass. Hall and camp out at night, according to Divest Harvard co-founder Chloe S. Maxmin ’15. She added that “hundreds” of advocates of the movement, including dozens of students, are willing to be arrested. The activists have said that they will need 50 to 100 participants in the sit-in each day. 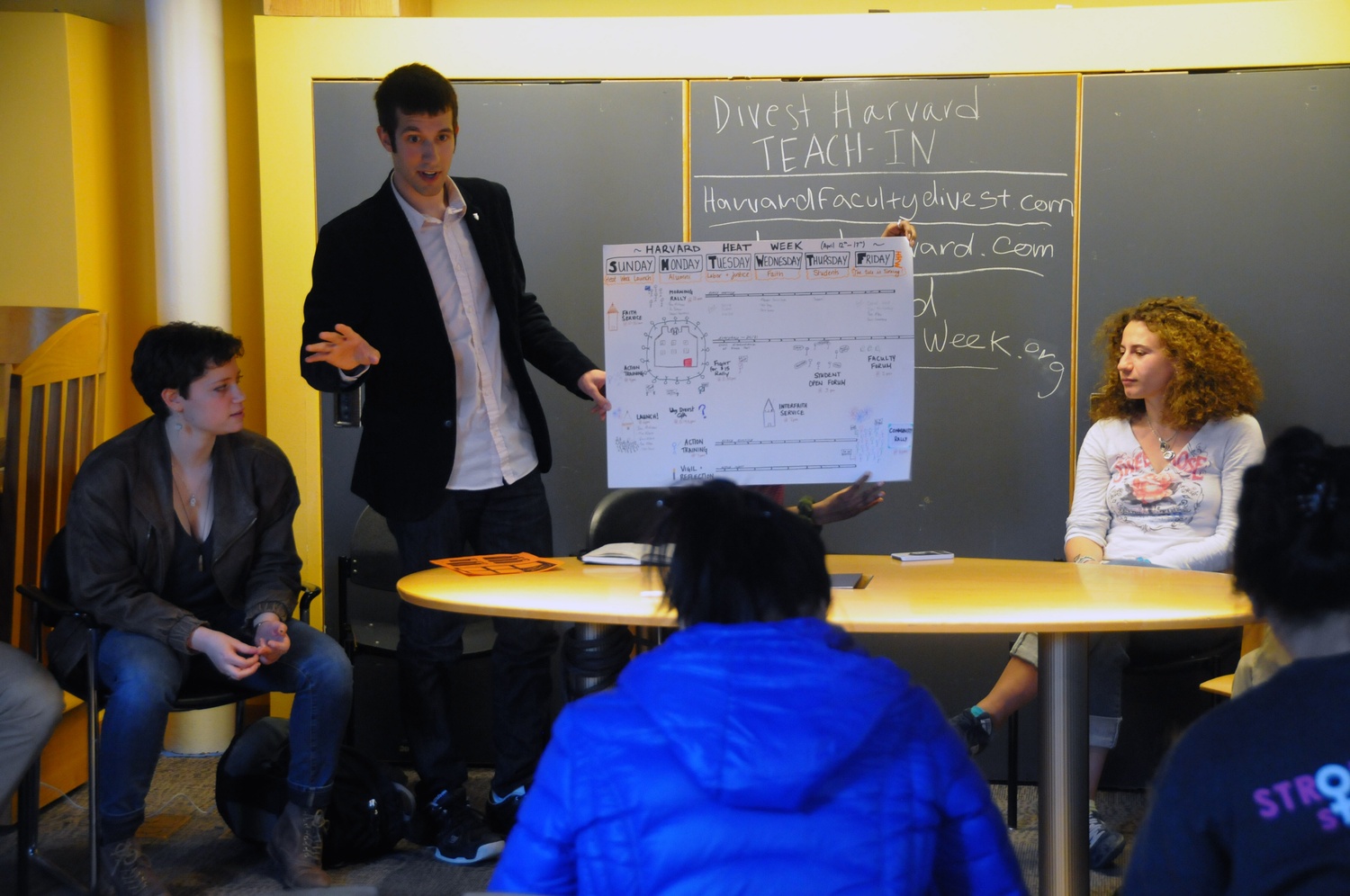 Members of Divest Harvard speak about the history of the group, which began with three students and has held active peaceful protests, fasts, and sit-ins since its conception three years ago in Ticknor Lounge on Monday evening. By Katherine M Kulik

“The time for dialogue has passed. The time for action is now,” Maxmin said to a crowd of 30 people gathered for a Divest teach-in on Monday afternoon.

Sorscher said that at the end of the protest, the activists hope for “a change in stance of the administration from the outright opposing [of divestment] they have right now.”

“We have to be disruptive and...demonstrate that the support is there and that it’s a deep support, that people are willing to take action on this type of movement,” Sorscher said.

“Heat Week” will also include action training, teach-ins, and nightly vigils, according to protest leaders. The movement has already garnered support from students, faculty, staff, and notable alumni, including former Colorado Sen. Timothy E. Wirth ’61 and activist-author Cornel R. West ’74, both of whom will be speaking at events throughout the week. Some students have said they will miss the entire week of class to protest, according to Sorscher.

Divest Harvard has targeted Mass. Hall in the past, previously occupying the building for roughly 24 hours in February and blockading the building last year, when one student was arrested. Harvard did not press charges against the student, Brett A. Roche ’15.

Despite the activists’ demands, Faust has repeatedly argued against divesting from fossil fuels. She has consistently said that Harvard can contribute to environmental sustainability and reduce fossil fuel dependence through research and teaching. Faust has also said that she is wary of making a political statement with Harvard’s finances. On Monday, one Divest member discussed that reasoning.

Faust has spoken about her own activism in college, when she skipped midterm exams to join a protest in Selma, Ala. Still, she said last month that she does not support the disruption of Harvard business by demonstrators.

“Peaceful protest is absolutely a part of our campus, and they have every right to peacefully protest,” Faust said, referencing the Divest group. “They don't have the right to stop University business.”

Faust said the “breach of perimeters” in the February occupation made her and her staff consider the security issues surrounding Mass. Hall. Harvard University Police Department spokesperson Steven G. Catalano said in a March statement—before the news of the blockade—that HUPD was aware of Divest Harvard’s plans to conduct further protests.

“As always, HUPD will work to safeguard the rights of Harvard community to express their views, while also ensuring the ability of other community members to continue conducting University business, including teaching, learning, research, and administration,” Catalano said at the time.

Faust could not be reached on Monday night. Her spokesperson, Jeff Neal, wrote that he hoped protesters would allow “others the freedom of movement and expression necessary to pursue their lives and work.”