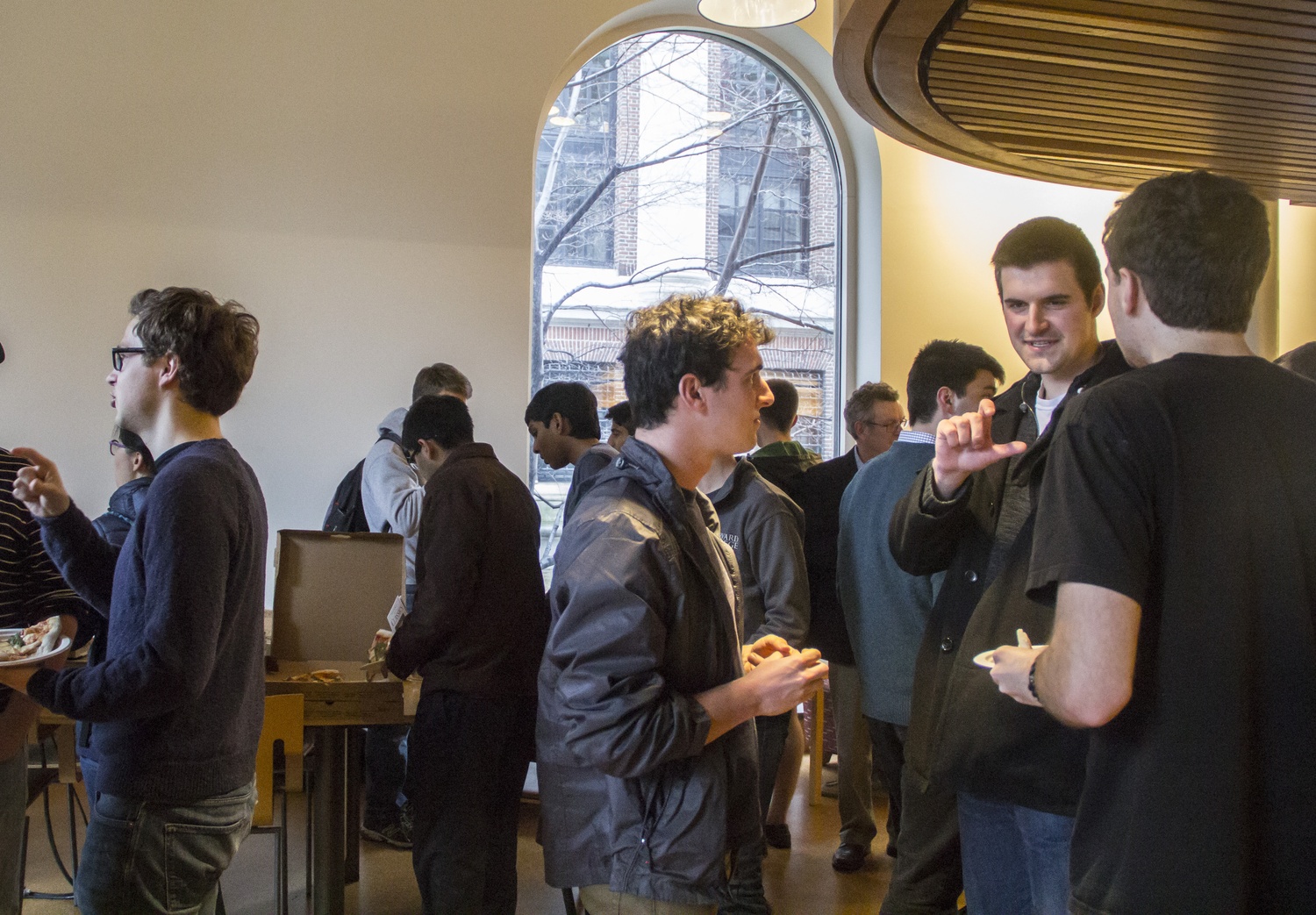 Freshmen students talk to faculty and current Classics concentrators about the department. The advising session was part of Harvard’s Advising Fortnight, a series of advising events aiming to inform freshmen about potential concentrations. By Zorigoo Tugsbayar
By Melissa C. Rodman, Crimson Staff Writer

While some freshmen said they have appreciated the opportunity to explore the College’s 48 concentrations during the annual Advising Fortnight, others called the events impersonal and poorly timed during midterm season.

During the two-week period, which began last Monday, freshmen discuss possible academic fields with faculty and concentrators through lectures, student panels, open houses, and other events hosted by different departments. Each freshman is required "to have at least one advising conversation" during the period and report this conversation to an online portal by Friday, April 24, according to the Advising Fortnight website.

Some freshmen said Advising Fortnight has allowed them to explore a variety of fields, even those that they have no interest in pursuing further, and to talk with faculty members in different departments.

“It was pretty helpful,” Andre Sanchez ’18 said, regarding the concentration fair set up during the Advising Fortnight kickoff in Annenberg last Monday. “I was kind of impressed with all of the people willing to help and talk.”

Although Sanchez had “an idea” about his choice of concentration going into Advising Fortnight, he said the fair opened his eyes to what else is available.

Jessie M. Laurore ’18 said she also appreciated the opportunity to explore the breadth of academic possibilities at the College at the fair. “It was nice to see all of the concentrations in one room,” she said.

Other students said they found these bigger picture events impersonal, overwhelming, and ultimately unhelpful in guiding their decisions about the concentrations.

Janae M. Bell ’18, who is currently deciding between economics and psychology, found that arranging office hours with a teaching fellow was more informative than the events set up by the departments. Bell suggested that the Advising Fortnight agenda should emphasize setting up one-to-one advising conversations, like the one she scheduled on her own, rather than larger panels which were not as helpful.

Carlos Mendizabal ’18, who went to a computer science event, echoed Bell regarding the impersonal nature of the larger panels. According to Mendizabal, “actual discussion” happens when he goes to professors’ and TFs’ office hours.

“[The larger events shared] mostly basic information that I could have looked up by myself on concentrations’ websites,” Robert G. Erikson ’18 said.

Still other students cited scheduling drawbacks of Advising Fortnight, including how the event falls during midterms and how their classes and extracurricular commitments often overlap with panels and open houses they would have liked to attend.

“Most have conflicts with my classes,” Trevor L. Chistolini ’18 said. Chistolini added that, since he has an idea about what he will choose as his concentration, the events are “not really something geared towards me.”