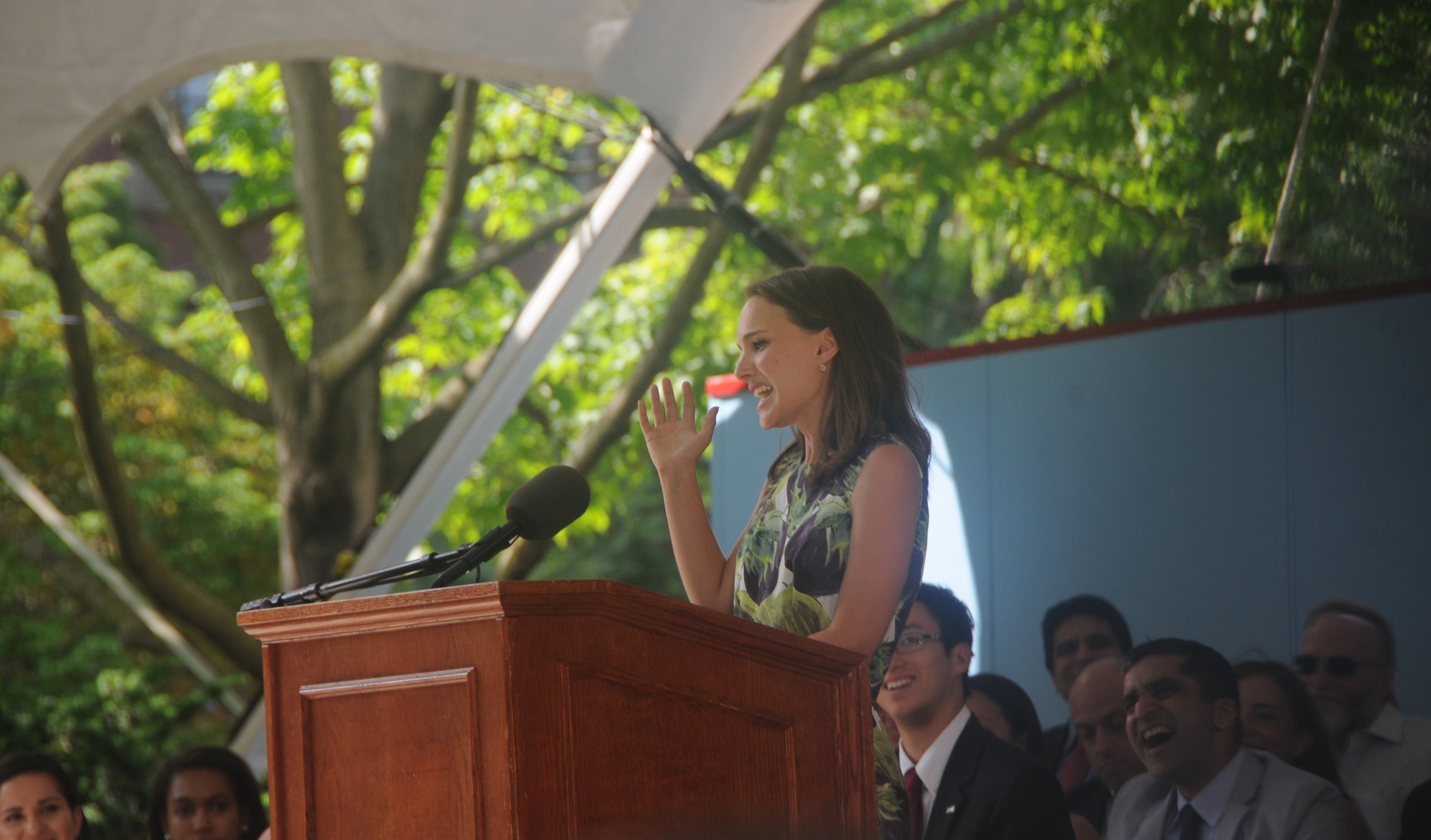 Natalie Portman '03 speaks to the Class of 2015 on the College’s Class Day. Portman was the first Harvard College graduate to win an Academy Award for best actress, and she acted in 11 films before she graduated.
By Jalin P. Cunningham, Crimson Staff Writer

More than 1,000 members of the Class of 2015 participated in Senior Gift, according to Senior Gift Co-Chairs Katie C. Gamble ’15 and Alissa Song ’15, whose campaign received $100,000 from an anonymous donor to benefit House life.

Senior Gift, which is often debated by students year-to-year, was especially controversial this spring as College seniors questioned the value of donating to Harvard as they sent flippant messages and GIFs over email. 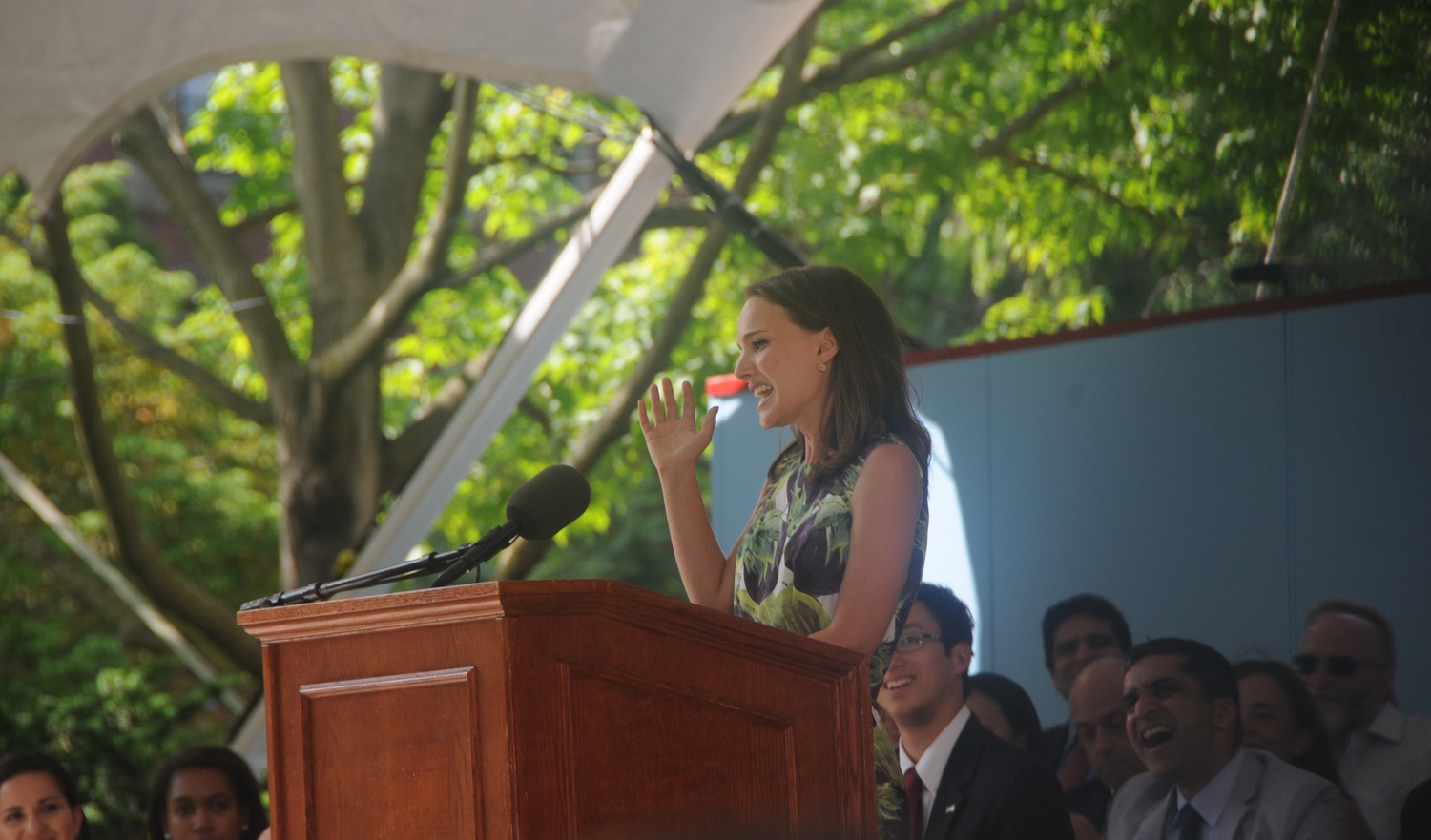 Natalie Portman '03 speaks to the Class of 2015 on the College’s Class Day. Portman was the first Harvard College graduate to win an Academy Award for best actress, and she acted in 11 films before she graduated. By Melanie Y. Fu

Students from the College’s Class of 2015 detailed the outcome of Senior Gift efforts at the College’s annual Class Day celebration in Tercentenary Theater on Wednesday, which was headlined with a speech by Oscar-winning actress Natalie Portman ’03. Portman took the stage at the end of the ceremony to speak to her experience balancing her fame in the performing arts with the academic rigor of Harvard.

“I got in only because I was famous,” Portman said. “This is how others saw me; it was how I saw myself.”

Portman reflected on attempting to find a “serious and meaningful” track at the College, while also maintaining her passion in acting. Portman’s time at Harvard helped her realize her own personal and professional abilities, she added, noting her performance in the Oscar-nominated film “Black Swan,” as well as a film she directed, “A Tale of Love and Darkness.”

Also at Wednesday’s celebration, Khurana delivered his first Class Day speech as dean of the College. In his remarks, he spoke to the Class of 2015 about his own upbringing and asked students to remember the “power of their past, and the possibility of their future.”

Khurana reflected on his parents’ effort to integrate his family into American culture after immigrating to the United States, arguing that family is a crucial factor in student achievement.

“No one comes to Harvard alone,” Khurana said. “The people who sit beside you and behind you have stood behind you for a long time, and many of them have traveled a long way to witness this moment in your life.”

Khurana also walked students through process of the Commencement ceremony and emphasized the historic prestige and importance of Harvard College, the University’s flagship school. After the graduate schools are called forth at Commencement, Khurana told the seniors, “the College, as the oldest and original part of this University will be called forth.”

After two days of festivities, the College’s Class of 2015 will receive their diplomas on Thursday, Harvard’s 364th Commencement Day.