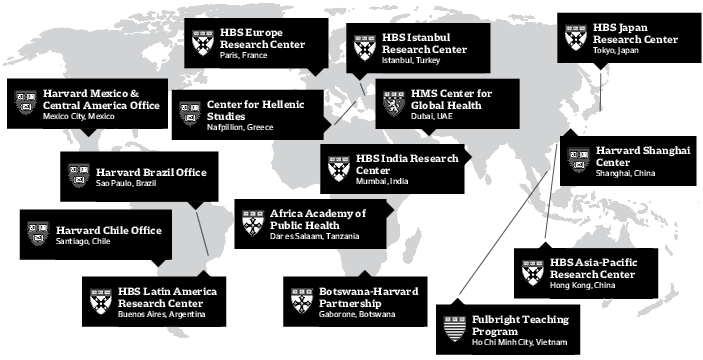 As more universities look to expand their influence abroad, Harvard might appear to be falling behind.

Meanwhile, University President Drew G. Faust has been firm that Harvard will not establish undergraduate campuses abroad. But this does not mean the University has stopped pursuing global footholds. Rather, Harvard maintains a significant global presence through 16 officially recognized overseas offices and dozens more programs organized by specific schools.

Three more centers—in Cape Town, Beijing, and Mumbai—were recently approved and are in various stages of development. Indeed, while Harvard may not have an undergraduate campus abroad, administrators say the system of international offices and school-run programs has allowed the University nimbly to expand its international presence while avoiding the restrictions and barriers that come with channeling resources into a single foreign campus.

HOME AWAY FROM HOME

Harvard’s offices abroad serve as outposts for University programming, teaching, and research efforts. From hosting speaker series to assisting research and travel planning to coordinating with alumni, the offices help Harvard extend its reach without needing to commit the amount of resources necessary for an international campus.

A Harvard center in Shanghai is another example of its embassy approach to international presence. The facility is equipped with classrooms, a multipurpose space, nine conference rooms, offices, 17 full-time staff, and a student intern. Besides hosting various events and Harvard Business School’s executive education courses, the center also helps with the recruitment of Chinese applicants to Harvard College, and is used by the Business School as a space to conduct admission interviews in the region. In the past four months, the center has held 16 events that were participated by more than 1,200 people, according to Jing Huang, the center’s managing executive director.

“The feel is very Harvard-like… Harvard Center Shanghai is an ambassador of Harvard to China,” Huang said.

The offices give the University the ability to change and adapt its overseas engagements as it sees fit. All start-ups are inherently risky, and start-up schools are no exception, said Jorge Dominguez, Harvard’s vice provost for international affairs. When things do not work, closing down a center—which has happened with Harvard’s centers in Moscow and Berlin—is much easier than closing down a university.

“I think having that flexibility is very valuable. We’ve done it in a way that gives us the best bang for our buck,” said Todd Washburn, an assistant provost for international affairs. Washburn added that establishing offices, instead of partnering with local universities, allows Harvard to collaborate with a whole variety of international partners instead of “playing favorites” and choosing any one in particular.

The structure of the offices has also, so far, helped Harvard largely avoid the faculty resistance that has developed around international efforts at other schools.

“There’s a lot of inertia in great academic institutions, and it’s natural for faculty to say: ‘Why are you rocking this boat? Why should you try something different?’” said NYU Shanghai Vice Chancellor Jeffrey S. Lehman, who said that reception among NYU faculty to the new venture was mixed at first.

But for Harvard, the office strategy allows for a great deal of flexibility in opening and closing locations, and allows for broader presence without the University having to choose a single location, said Fernando M. Reimers, a professor at the Graduate School of Education who specializes in global education.

Harvard’s Connecticut cousin, though, made the more permanent decision by opening a campus abroad, Dominguez said, singling out Yale-NUS, a college jointly run by Yale and National University and Singapore.

“I do not understand why Yale has done what it did. They have massive expenses, narrowly defined degree programs, they are under-demanded and receive many fewer applications than they had planned,” Dominguez said.

Over the past 15 years, Harvard has centralized its management of overseas operations, in part to relieve the logistical burden on faculty and students as they conduct their research.

Harvard has had international activities for at least 150 years. In the 19th century, professors who wanted to conduct research overseas often went with soldiers, and were on their own to learn about the laws and customs of their destination country, according to Joseph Levy, the director of Harvard’s Global Support Services.

For most of this time, the University president had little knowledge and oversight of Harvard’s international activities. This state of affairs changed through a string of efforts in the last 15 years intended to enhance oversight and provide support for faculty and students who wanted to venture abroad, according to Levy. These include the creation of the University Committee on International Projects and Sites in 2006, the creation of the vice provost for international affairs in 2006, and the establishment of Global Support Services in 2011.

Global Support Services is an example of a centralized office which has sought to lower or erase those barriers. The four-year-old-office provides pre-travel information on safety risks and local laws and works with external partners to provide on-the-ground support to affiliates in need. Recently, Global Support Services helped extract Harvard affiliates from Nepal after a crushing earthquake.

“Certainly, our office didn’t exist 10 years ago, and you could argue that this is evidence of centralization,” Washburn said. The push for “One Harvard” has increased the connectedness of these international offices and has established administrative support services, such as GSS and the Office of the Vice Provost for International Affairs, to encourage the deepening of offices’ abilities, as well as the creation of new offices.

“To me it’s about lowering barriers for our faculty and students to pursue their research and education interests, and to not let the hurdle of logistics stand in the way of pursuing research interests,” Washburn said.

Washburn added that his office allows center development to occur at an accelerated pace, without being dictated by Harvard’s central administrators.

“A center or a school that wants to open a physical presence, an office if you will, comes to us when they’re ready,” Washburn said. “I think that’s a smart way to approach it, rather than the President of the university proclaiming an office in city X, Y, and Z—Harvard is enormously decentralized and always has been.”

Dominguez said that when he became the University’s first vice provost for international affairs about a decade ago, the average time it took for a proposal on global engagement to be approved was two years. Now, it is at most six months.

“The difference between then and now is that now there is now a thoughtful process, by colleagues, not by some administrative fiat…and you get good advice and a quicker decision,” he said.

An earlier version of this article incorrectly stated when the University Committee on International Projects and Sites was created. In fact, it was created in 2006, not 2000.