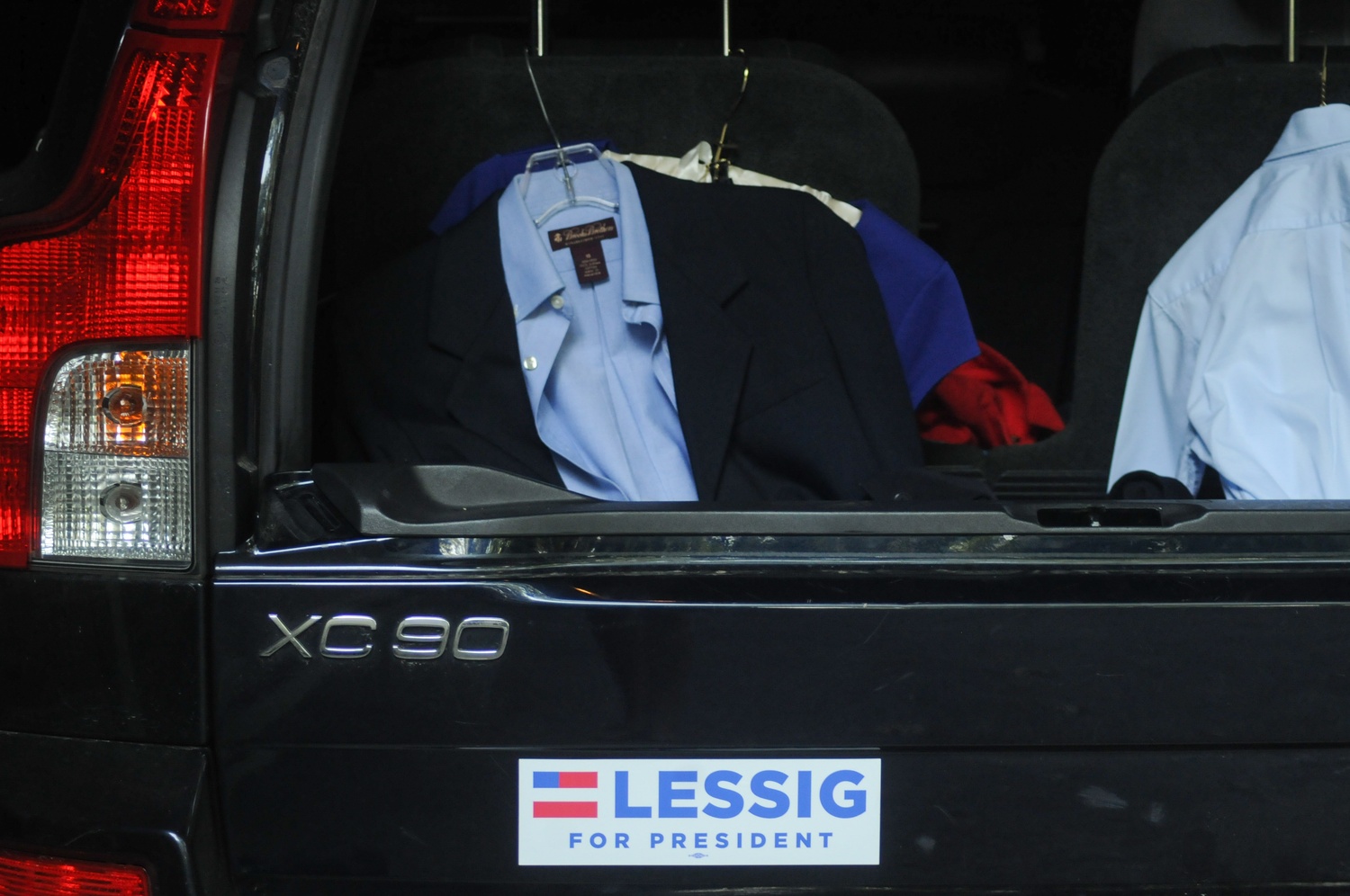 Prof. Lawrence Lessig's son's jacket sits in the back of his family's car before Lessig's campaign kickoff. Lessig launched his bid for the democratic candidacy on Wednesday, Sept. 9 in Claremont, NH. By Meg P. Bernhard
By Meg P. Bernhard, Crimson Staff Writer

In his outdoor speech, about 115 miles northwest of Boston, Lessig repeated that America’s democracy has been “bought” by big campaign donors and that “this is not a democracy anymore.” He also reiterated his one-policy plan: to pass a referendum aimed at reforming campaign finance and then immediately give up his presidential powers to his vice president.

Lessig first said he would run for president on Sunday, after he exceeded his goal of raising $1 million in crowdfunded donations to kick-start his campaign. In an interview after the event, Lessig said he and his campaign staff “pulled together” the launch event in about four or five days, since they were not sure they would meet the goal by their deadline of Labor Day.

“I think nobody was willing to say we had done it until we did it,” Lessig said.

As of Wednesday night, Lessig had received more than $1.064 million in donations.

Now, Lessig said, he is focused on fulfilling the requirements to participate in upcoming Democratic Party debates. To participate, he will need to gain at least 1 percent of support in three or more credible national polls.

Flanked by his wife and three children at the lectern, Lessig emphasized the symbolic importance of the location, which today houses a senior center. In 1995, then-President Bill Clinton and House Speaker Newt Gingrich met at that very spot to create a commission mandated with studying the limits of federal lobbying and financing campaigns.

New Hampshire was also a symbolic location for Lessig because he has held numerous walks across the state—called the New Hampshire Rebellion—about campaign finance reform, said his wife, Bettina Neuefeind, a fellow at Harvard Law School.

Supporters came from around New Hampshire and beyond to hear Lessig speak. Doug Hall, a supporter from California who vacations in New Hampshire over the summer, said the timing of Lessig’s last-minute campaign launch was perfect, because he will Hall leave for California on Thursday.

“I am convinced that this is the number one issue,” said Hall, who heard of Lessig through his New Hampshire Rebellion walks. “Why not think big?”

According to Jeff McLean, a Lessig campaign organizer, the campaign has a fairly small staff, spread across San Francisco and Austin, Texas, among other locations.

Lessig is on leave from the Law School this semester and is not teaching classes. He said he is uncertain when he will return to the school, depending on whether or not he receives the Democratic nomination. Harvard rules forbid professors from taking leaves of absence for more than two consecutive years.

An earlier version of this article misstated Lawrence Lessig's fundraising total as of Wednesday night. As of Wednesday evening, the figure was $1.064 million.