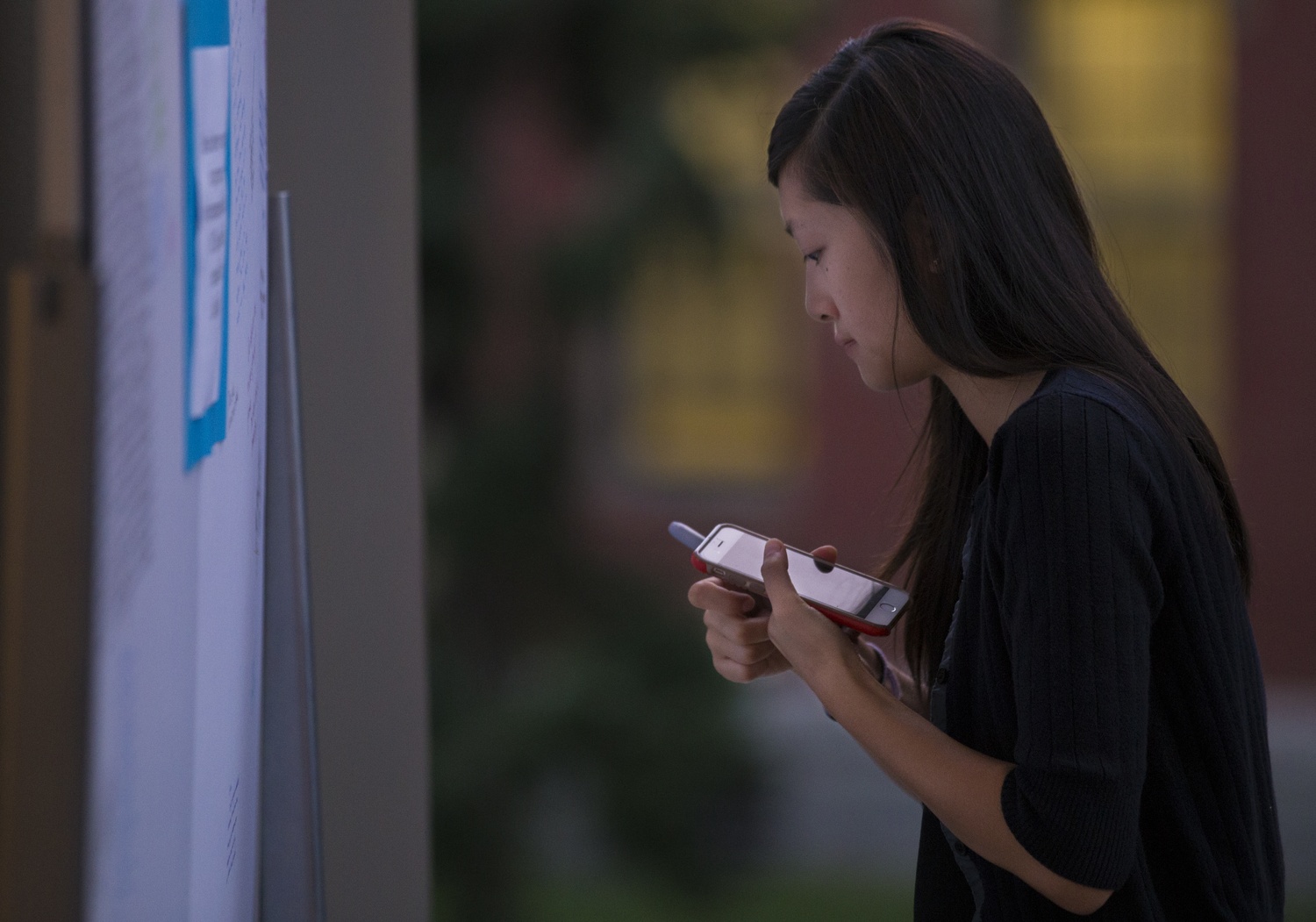 Vivian Y. Chan ’15 pauses while writing a note to Luke Z. Tang '18, who died last Saturday. On Wednesday, students, faculty, and family members gathered in Memorial Church to commemorate Tang. Childhood friend Sarah Wang said, “Luke taught me so much about love, humility, and perseverance. I love him like a friend, care about him like a brother, and miss him more than he could ever know.” By Madeline R. Lear
By Jalin P. Cunningham, Crimson Staff Writer

Recalling his compassion and deep faith, hundreds filled the pews of Memorial Church on Wednesday evening to celebrate the life of Luke Z. Tang ’18, a Lowell House sophomore.

Music and prayers characterized the memorial service, which began with a rendition of “Over the Rainbow," delivered by a quartet including members of the Harvard-Radcliffe Asian American Christian Fellowship, of which Tang was a part. Shortly after, Dean of the College Rakesh Khurana offered a reading of “No Man Is An Island” by poet John Donne.

Tang died suddenly and unexpectedly on Saturday. The state medical examiner's office has not yet released a cause of death—on Wednesday, a spokesperson said it was pending—but police do not suspect foul play.

The Wednesday evening service, emotional and touching, highlighted Tang's relationship with his faith and his passion for learning and teaching others. Reflecting on his life, speakers read several prayers, Bible verses, and a passage from Tang’s favorite book, "The Brothers Karamazov."

Friends and family members shared the message that faith was a part of life that Tang held dear, reiterating his passion for religion and teaching others throughout the service.

“Because of Luke, I am Christian,” said Catherine Y. Li ’18, who lived in Lowell with Tang.

“He asked us the difficult questions about our faith, and showed us what he was passionate about without intimidating us or alienating us,” said Sarah Wang, Tang's childhood friend.

M. Hanl Park ’18, one of Tang's blockmates, described his friend's love for teaching, saying, “he had more vitality than anyone I’ve ever met.” 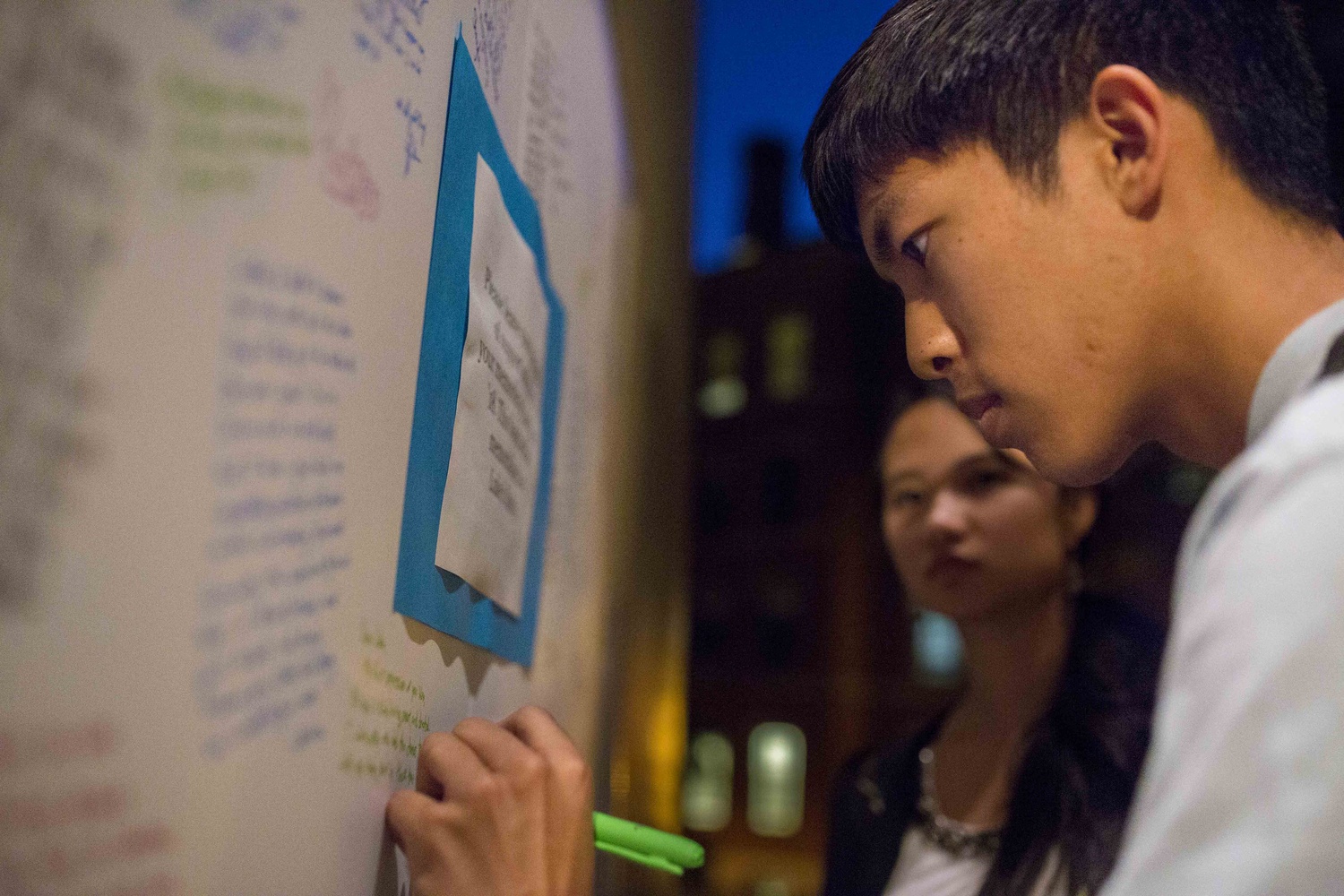 Molly J. Zhao ’17, left, looks on as Reece V. Akana ’17, right, writes a message on a board outside Memorial Church to Luke Z. Tang '18, who died last Saturday. On Wednesday, students, faculty, and family members gathered in Memorial Church to commemorate Tang. By Madeline R. Lear

Friends and family also described Tang as deeply committed to empathy and compassion. Friend Jimmy Lin ’17 described Tang's practice of leaving a bookmark in both the Bible and the Quran, a small symbol of his tolerance and understanding.

“Luke taught me so much about love, about humility, about perseverance,” Wang added.

Two professors, Courtney B. Lamberth and Howard Georgi, called a Tang a “blessing” to teach. According to speakers at the service, Tang’s intellectual interests were broad and far-reaching, “from physics to philosophy.”

“In the short time that we knew him at Lowell, it became clear to us that Luke was a committed young man. Committed to his spiritual journey... and committed to his quest for knowledge,” Casey said.

Outside of Memorial Church, visitors shared their memories of Tang by writing notes on whiteboards.