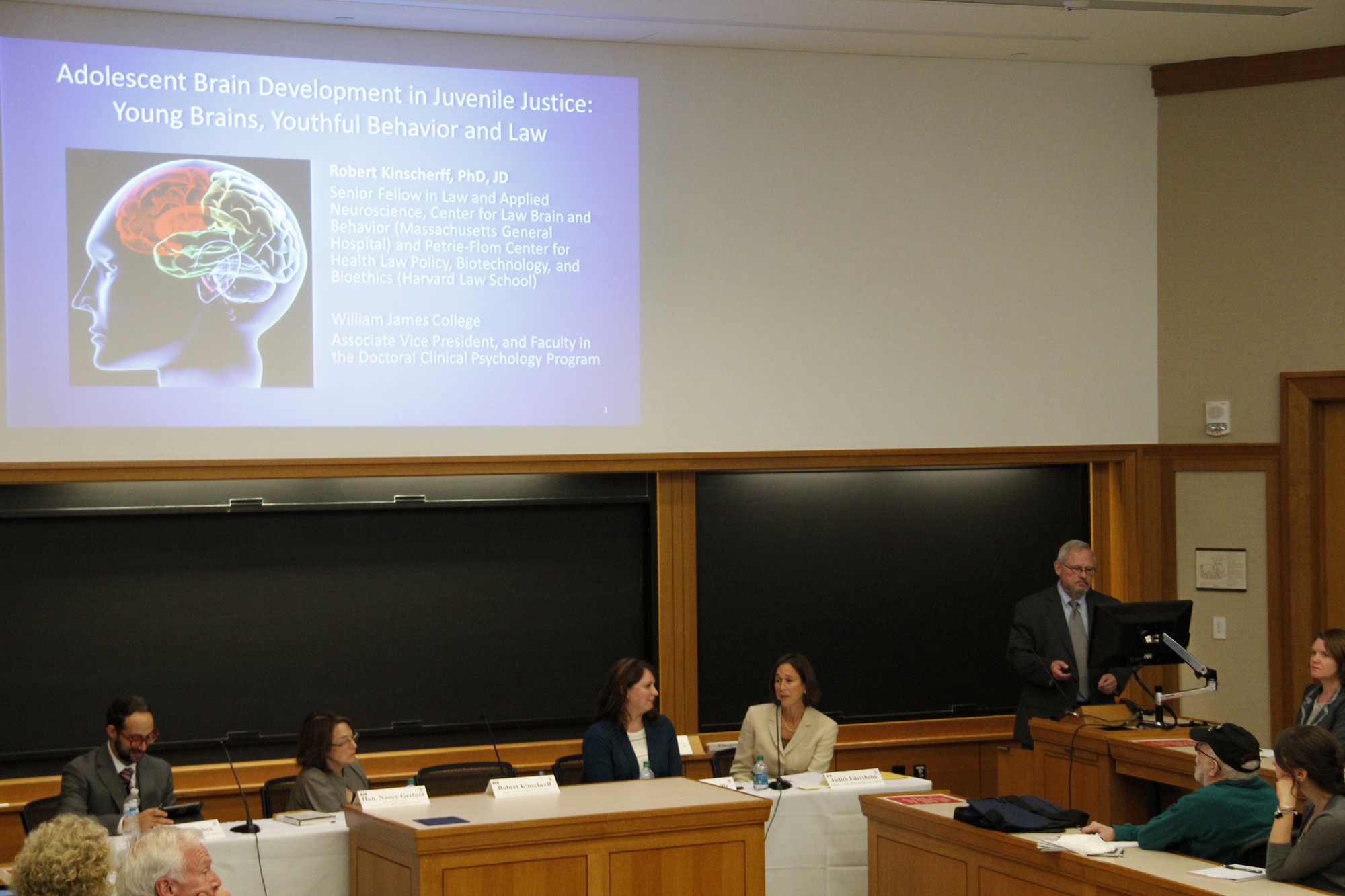 I. Glenn Cohen, law professor, moderates a panel discussing our growing knowledge of the adolescent brain and its role in juvenile court trials, citing the Tsarnaev case in particular.
By Jonah S. Lefkoe, Contributing Writer

A panel of legal and medical scholars and practitioners agreed in a panel discussion on Monday night that the American criminal justice system does not give adequate consideration to the cognitive underdevelopment of adolescents.

The death sentence of Dzhokhar Tsarnaev, the American student who carried out the 2013 Boston Marathon bombing, served as a preface for the discussion.

A standing-room-only crowd of about 100 people packed the Wasserstein Hall classroom at Harvard Law School for the discussion entitled “From Troubled Teens to Tsarnaev: Promises and Perils of Adolescent Neuroscience and Law.” The event, hosted by the Petrie-Flom Center for Health Law Policy, Biotechnology, and Bioethics, was the center’s first of the year and a collaboration with the Center for Law, Brain and Behavior at Massachusetts General Hospital. 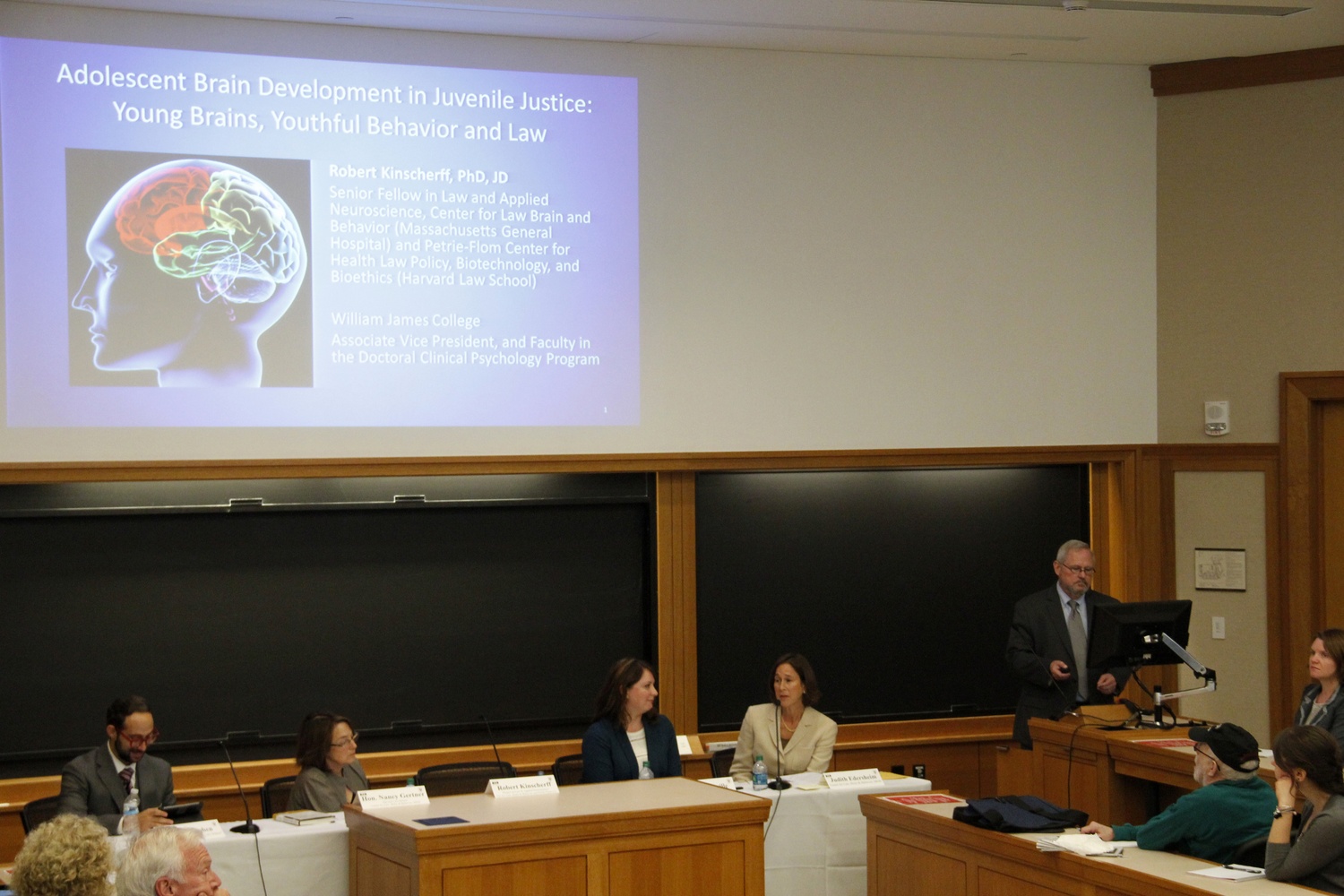 I. Glenn Cohen, law professor, moderates a panel discussing our growing knowledge of the adolescent brain and its role in juvenile court trials, citing the Tsarnaev case in particular. By Isabella S. Beroutsos

“Our country is going through a profound movement toward the punitive,” said Nancy Gertner, a senior lecturer at the Law School.

In a previous editorial in the Boston Globe, Gertner cited prominent lawyer Clarence S. Darrow’s argument that “the imposition of the death penalty made citizens no better than the killers on trial.” She argued that modern neuroscience research can provide objective grounds for greater discretion in sentencing juvenile criminals.

Leah Somerville, director of the Affective Neuroscience and Development Lab at the University, struck a similar note.

“The adolescent brain is structurally different from the adult brain,” she said.

These objective differences between adult and juvenile brains, resulting in measurable decreases in inhibition, underdeveloped resistance to peer pressure, and increased attraction to risk, should be given more consideration when sentencing juvenile criminals, according to Somerville.

The panelists described the need to apply the findings from modern neuroscience and criminal justice research to programs that aim to support at-risk youth. They also discussed the need to strengthen programs aimed at promoting healthy environments for adolescents, keeping students in school, and rehabilitating youth offenders.

“Individual sentencing cannot solve this issue,” Gertner said. “We have to look at this problem institutionally.”

Panelist Robert T. Kinscherff, a senior visiting fellow in law and applied neuroscience at the Petrie-Flom Center and the Center for Law, Brain, and Behavior, said there is a need for increased understanding of the very common conditions that lead to youth delinquency. He also spoke of the “growing political agreement” that—rather than being tough on crime—the U.S. Department of Justice should be “smart on crime.”

The panelists were hopeful about enacting change. Describing how to implement these scientific breakthroughs, Judge Gertner emphasized the importance of objective neuroscience in strengthening the argument for programs to support at-risk youth and discretion when sentencing young criminals.

“It’s no longer just faith and hope and some gut, common-sense solution,” Gertner said. “You can actually look at the [neurological] differences, and we need to take them into account.”

But some audience members left the event with mixed feelings about the potential for change. Takahiko Iwasaki, a Japanese judge and visiting scholar at the Law School, said, “I think it’s very difficult for lawyers or judges to actually take into account these [scientific] accomplishments in specific cases.”