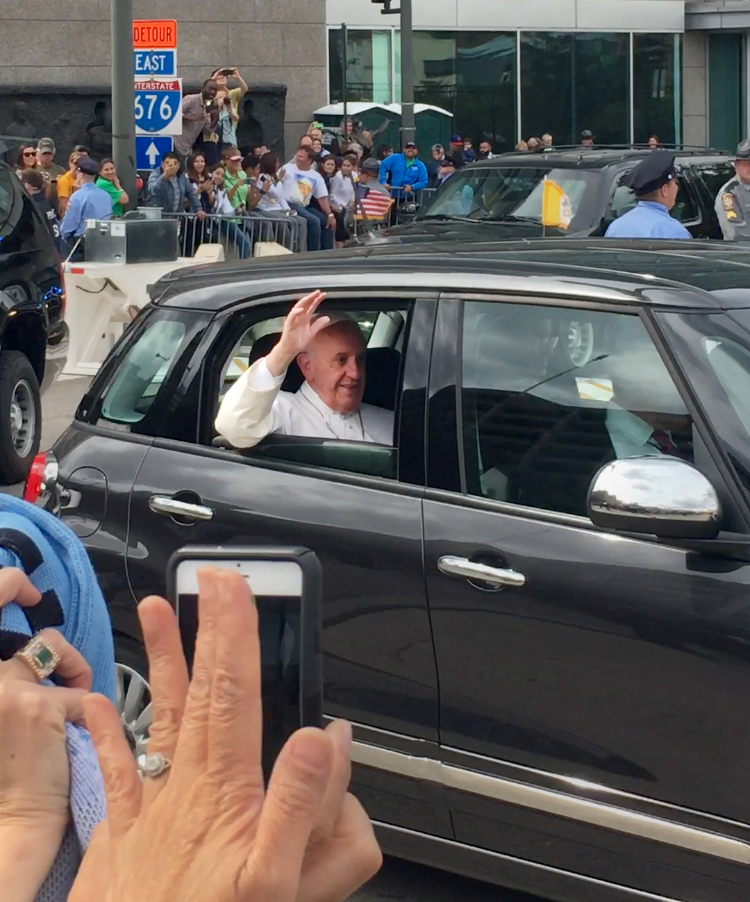 During Pope Francis’s visit to the United States, a group of more than 50 undergraduates went to Philadelphia this past weekend to see the leader of the Catholic Church.
By Michael S. Avi-Yonah, Crimson Staff Writer

During Pope Francis’s historic visit to the United States, more than 50 undergraduates to travel to Philadelphia this past weekend and catch a glimpse of the leader of the Catholic Church.

Several students said that the trip, an initiative of the Harvard-Radcliffe Catholic Student Association, provided a once-in-a-lifetime opportunity to witness the pontiff in action.

During Pope Francis’s visit to the United States, a group of more than 50 undergraduates went to Philadelphia this past weekend to see the leader of the Catholic Church. By Courtesy of Yonatan Girma

“I wanted to see the leader of my faith, and it felt like it would be an opportunity to get to know God,” Bryant W. Huggins ’19 said.

AnnMarie C. Healy ’16, the co-president of the Catholic Student Association, said that she had already seen the Pope this past summer while studying abroad, but felt that the Pope being in the U.S. was an important moment in its own right.

“It was such a historical moment since it may be the only time this Pope comes to America in my lifetime,” Healy said. “It was also important for me to be able to represent Harvard and to show that there is a Catholic presence on campus. We do exist, and we’re vibrant and interested in growing in our faith.”

Others noted the sense of togetherness that arose due to the common experiences participants shared during the trip.

“It was really cool to be with a bunch of people my age who were similarly moved by seeing the Pope,” Cecilia Laguarda ’17 said. “We were like a bunch of teenage girls at a One Direction concert because it was really exciting for us to hear the Pope speak.”

Father Mark W. Murphy, who serves as the undergraduate chaplain of the Harvard Catholic Center, said that Pope Francis’ openness has earned him popularity and the nickname of “the People’s Pope.”

“When people think of God, they want to focus on God’s message of mercy, compassion, and dialogue. The Pope embodies that. He’s a uniter,” Murphy said.

Emily Click, assistant dean for ministry studies and field education at the Divinity School, was similarly moved by Pope Francis when she saw him during his visit at the White House.

“What was very striking to see was the degree to which he combined strength and humility. To see him arrive in a tiny black Fiat showed his strength in embodying his principles and having humility with a purpose,” Click said.

She added that she plans to follow up on the trip by leading a session with Divinity School professor Francis X. Clooney for their faculty in which they will reflect on the Pope’s American tour. In addition, she will feature Pope Francis as a case study in a leadership course she instructs at the Divinity School, HDS 2925: “Administration and Leadership.”

Father Murphy said that he hopes to have a meal for all the participants in which they will be able to reflect on their time in Philadelphia. For its part, the Catholic Student Association plans to have a speaker come in at some point this semester who will talk about the theme of family that Pope Francis highlighted in Philadelphia, according to Healy.

“I hope this trip impacted people's’ lives in a positive way and that they want to become more faithful because of it,” Healy said.

An earlier version of this article and the caption of an accompanying photograph incorrectly stated that two Divinity School faculty members accompanied a group of undergraduates to see the Pope in Philadelphia. In fact, the two faculty members saw Pope Francis on two separate trips, to New York and Washington, D.C., respectively.