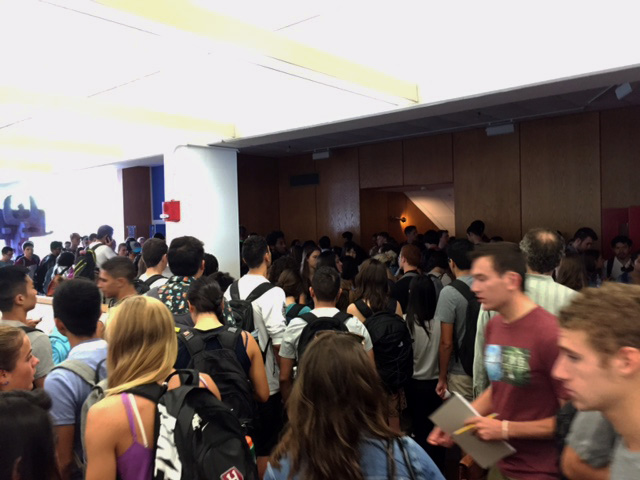 Students at the College faced an additional obstacle when they shopped for fall courses this week: a new course catalog search tool that students characterized as visually appealing but confusing and unintuitive.

Students filled the Science Center lobby during the first day of shopping period on Wednesday, Sept. 2. By George J Lok

The new search interface, part of the reworked my.harvard portal, comes as administrators roll out a new centralized student information system and was released in preview mode in mid-July, according to Faculty of Arts and Sciences Registrar Michael P. Burke. On the new platform, students can filter courses based on criteria including class meeting time, whether they fulfill General Education requirements, concentration, and cross-registration availability. It also links course listings directly to course websites, the Q Guide, Google Maps and Harvard Maps (for meeting locations), and the Coop (for course textbooks).

But despite those bells and whistles, some students had trouble navigating the tool when they arguably needed it most—shopping week.

“I just couldn’t figure out the user interface—it wasn’t completely intuitive,” said Ronia S. Hurwitz ’18, who also disliked that the new interface lacks the capacity to display courses on a calendar based on meeting times. “It’s difficult to see all courses—that I wasn’t thrilled with—and it’s difficult to see the location or changes that have happened recently.”

For some students, the initial trouble understanding the new tool was compounded by the fact that the change at first rendered courses.cs50.net, a popular external and student-made course browsing tool, more or less useless. The service was not updated to reflect new course information until Aug. 29, and even now, it lacks class meeting locations, meaning students essentially had to look to my.harvard when course shopping.

Former Computer Science 50 head teaching fellow Robert T. Bowden ’13, who has updated the external tool for several semesters, said the new my.harvard interface disrupted the data feeds the site previously used to update its information. While the my.harvard staff sent him most of the data he needed to update the tool, Bowden said, he had to manually scrape my.harvard for some other information, like that regarding Gen Ed credit and instructors.

CS50 Courses saw a drop in traffic, somewhere around 10 to 20 percent, compared to previous years, which Bowden attributed in part to the fact that it was initially out of date.

Regarding the official my.harvard tool, some students were also frustrated by what they termed an absence of core functionality—peer advising fellow Harrison X. Becker ’17, for example, said he initially could not see who his freshman advisees were and that they could not view their course placement test scores on the platform. The my.harvard team eventually resolved these issues, he said.

Elodie A. Saint-Louis ’18, meanwhile, noted that the button that supposedly links course listings to the Coop website leads to an error message, at least for some courses.

“So I have to open a new tab, go to the website, and search for my classes,” Saint-Louis said. “What’s the point if it’s not working?”

Burke said administrators will add additional functionalities—such as a new plan of study tool and a concentration declaration service—throughout the semester and later on. Burke said students will have an incentive to use the new official tool instead of CS50 Courses in the future because it integrates student records into one platform and guarantees accuracy.

Students like Zach C. Chambers ’18, however, still used CS50 Courses this shopping period. And Bowden, for his part, said CS50 Courses will not be discontinued, at least for the time being.

“As long there’s a student who prefers using CS50 Courses over the my.harvard system, we will happily continue supporting them,” he concluded.

The my.harvard team has hired more than a dozen students to serve as “ambassadors” for the fall semester and host office hours to answer questions about the new interface and hear feedback. They will be paid $1,000 for their work.