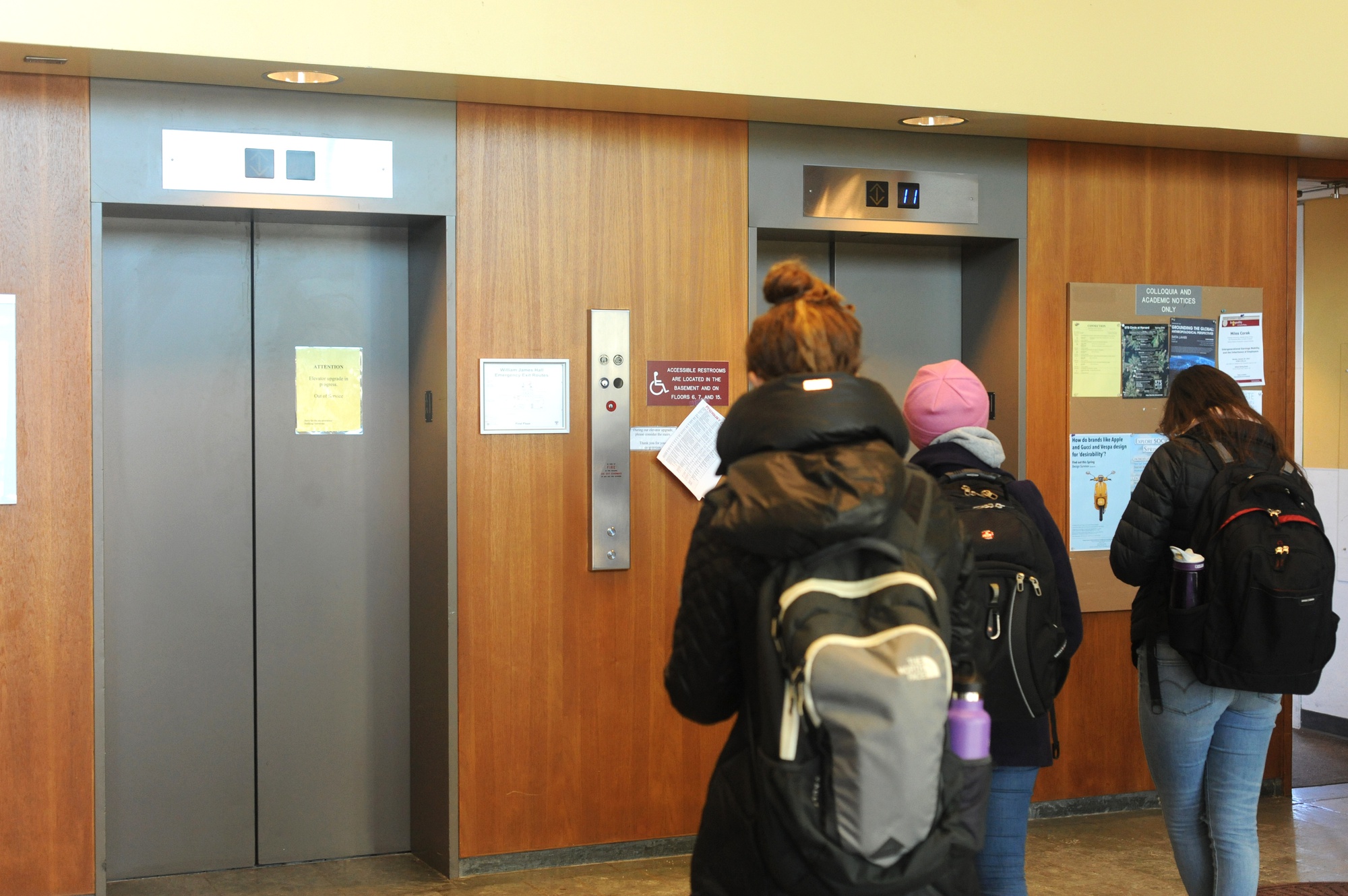 Students wait for one of the two working elevators in Harvard’s William James Hall to arrive on the first floor Monday afternoon. The building’s three elevators are undergoing repairs one at a time.
By Hannah Natanson, Crimson Staff Writer

For most of the spring semester, students and faculty members heading to William James Hall—the 15-story home of the Psychology and Sociology departments and the Social Studies concentration—will face delays as they travel to higher floors.

One of three elevators in William James Hall has grounded to a halt, frustrating faculty and students alike. The elevator is not broken but is undergoing renovation as part of a larger upgrade process begun last July, according to building manager William J. Santoro. 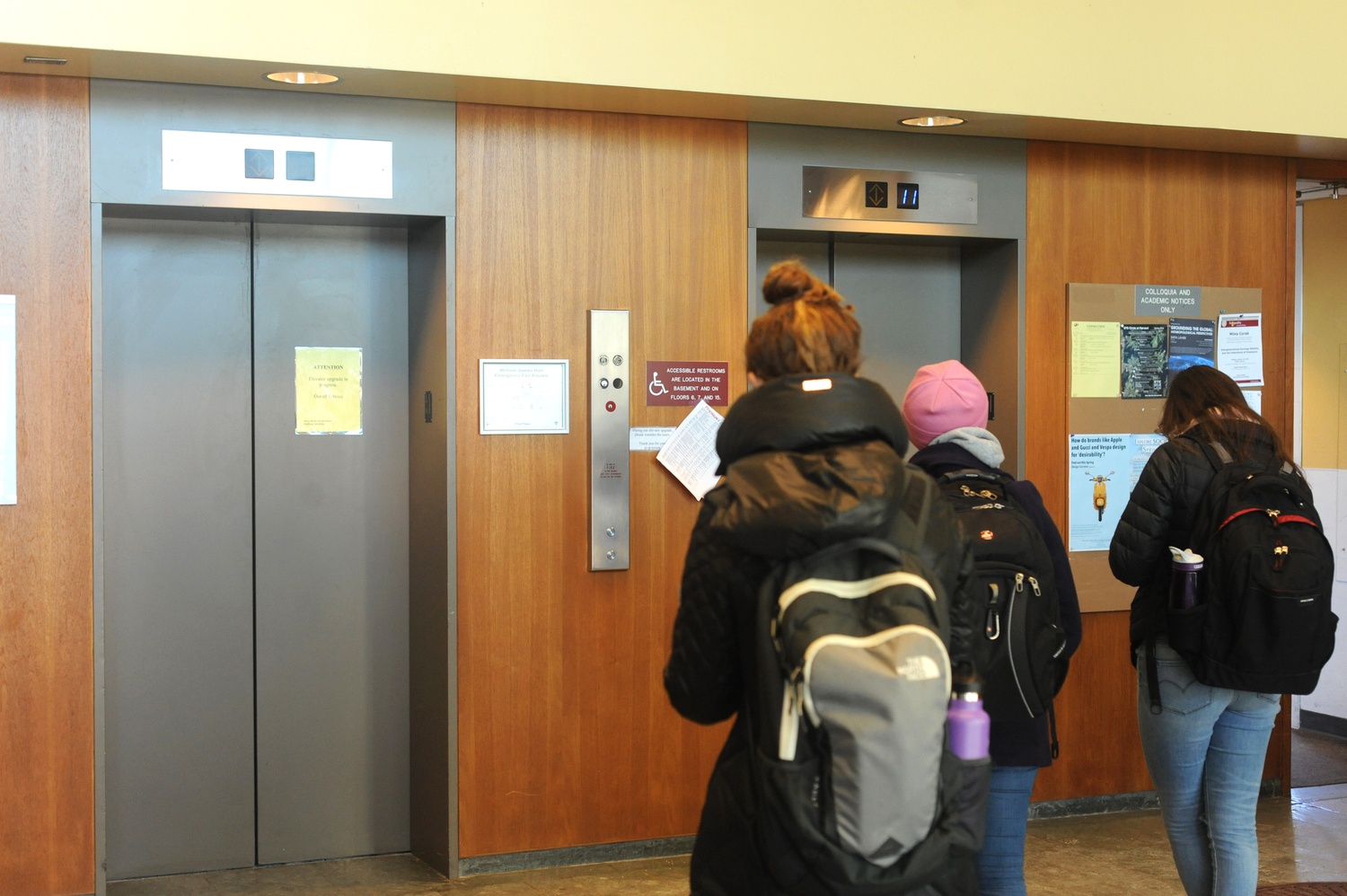 Students wait for one of the two working elevators in Harvard’s William James Hall to arrive on the first floor Monday afternoon. The building’s three elevators are undergoing repairs one at a time. By Matthew W DeShaw

Each elevator car takes 14 weeks to update. The project is running on schedule, and all three elevators should be operational again in May, Santoro wrote.

According to Santoro, the elevators were due for an upgrade. One has already been upgraded, another has yet to be overhauled, and a third is currently under construction.

“[We’re only] doing one car at a time, so that we could keep two elevators running for the duration,” Santoro said.

Despite these precautions, students and faculty who frequent the building expressed frustration with both the renovation process and the general functionality—or lack thereof—of the elevators.

“I have been going to [William James Hall] at least two times a week for classes since freshman year, and I don’t recall a time when all three elevators were functioning,” said Psychology concentrator Iris Feng ’17. “I’m always late for my classes, past the seven minute mark, because there’s always a huge crowd waiting for one elevator to arrive.”

Feng added that she began to use the stairs this year. She called her decision a “faster” and “healthier” choice. 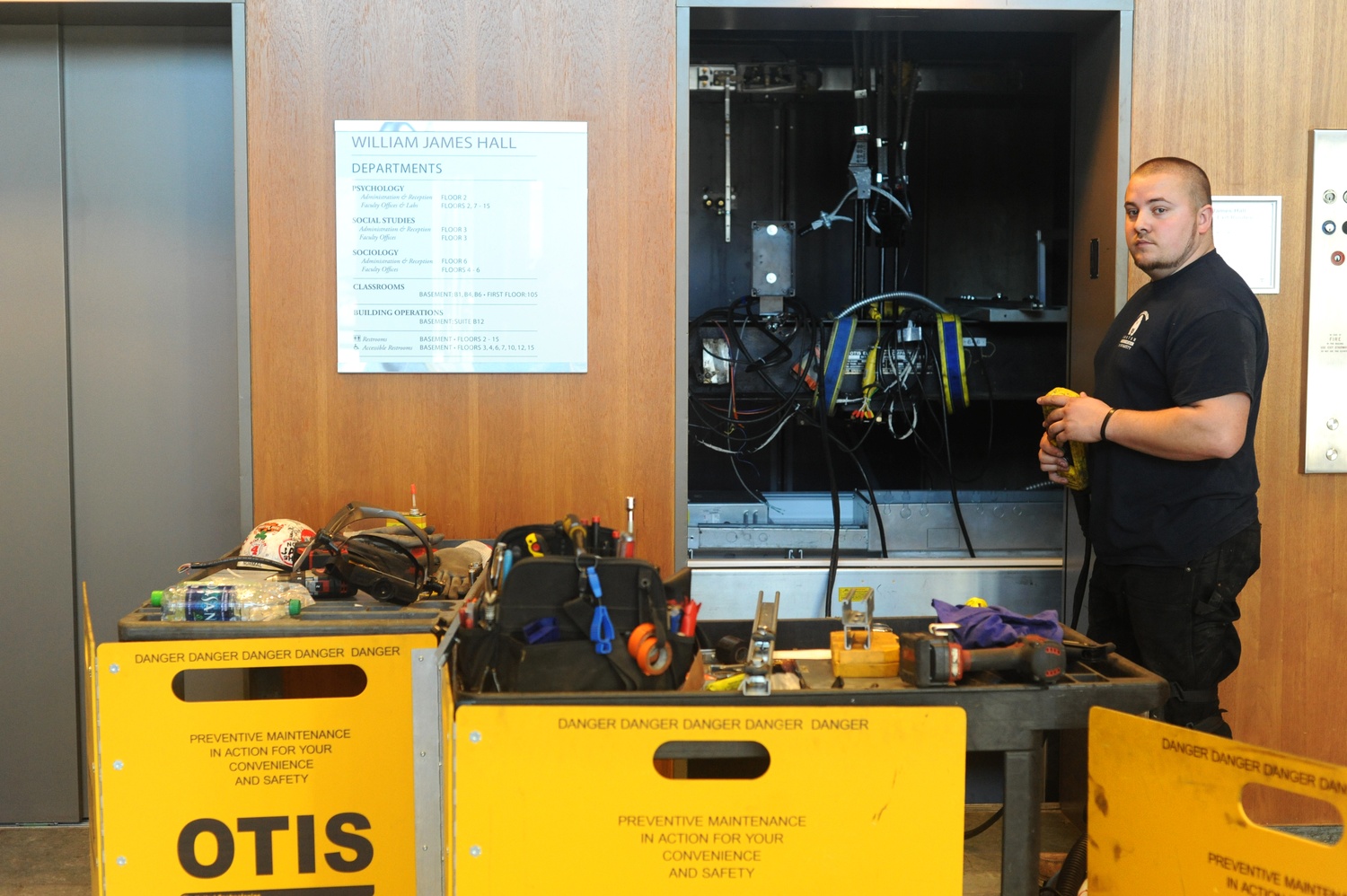 Associate professor of sociology Jocelyn Viterna said she considers the non-functioning elevator “an incentive to walk.” She said she would encourage anybody on the fifth floor or below to take the stairs.

“Those who are on the higher floors are the ones who need it,” Viterna said.

But sometimes the stairs are not the easiest, or quickest, option.

“I have a tutorial on the fifteenth floor, so taking the stairs...isn’t really feasible,” Psychology concentrator Isabel G. Alexander ’18 wrote in an email. “Funnily enough, I’m waiting for the elevator right now.”

Though Santoro predicts that the upgrade will be completed by May, some remain skeptical that all three elevators will ever work at the same time.

“The elevators are basically a running joke in William James,” Psychology concentrator Garrett R. Maron ’16 said. “Most people have developed a sense of humor about the delays. It’s just a fact of life for us.”