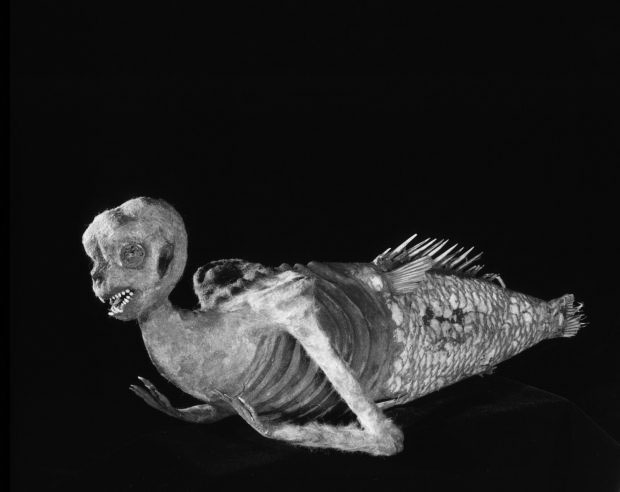 From my vantage point in the corner of the room, I watch dozens of people lay eyes upon the Feejee Mermaid for the first time. Each person steps up to the exhibition table, radiating enthusiasm. Each gaze hovers in the air above the mermaid, before realizing that the specimen is only four or five inches tall. First we are confused: Is this really it? Then we are angry: Is this really it? Finally we accept: This is really it.

Nine or 10 inches from forehead to tail, the “mermaid” lies nestled in layers of diaphanous white like a freshly unwrapped present. (Just the gift I’ve always wanted: a brand-new mummified fish monster.) The fish parts are easy to recognize—there’s the mouth, with its needle-like teeth, and the spines that serve as stiff little fingers. The rest, less so. The narrow rib cage is patchy with fluff, and the stick-like arms are fashioned out of papier-mâché. With the jaunty upwards flick of its wrists and its surprised expression, it’s a bizarre, hairy pastiche of The Scream—a little too thrilled to be in that selfie you’re taking.

The Feejee Mermaid is one of the most famous hoax “mermaids” of all time and the pride and joy of the Peabody Museum. It’s appeared everywhere from the American Museum of Natural History to “The X-Files,” but has resided at Harvard ever since 1897. Under the dim museum lights and flashing iPhone cameras, its dusty eye sockets seem to twinkle with excitement and cool professionalism. As Diane Loren says, “She’s seen a lot of the world already.”

Loren is a curator at the Peabody Museum of Archaeology and Ethnology and uses female pronouns to refer to the Feejee Mermaid, as if she were an in-demand celebrity and Loren her agent. “She’s a favorite among the undergraduates,” she says. “We’re always taking her out of the collections.”

For this precious half hour, though, the mermaid is on public display for the Peabody’s 150th anniversary, alongside a whole host of novelties, from Lewis and Clark’s bear claw necklace to a 90,000-year-old human skull. The museum is humming with toddlers and academics alike, their lapels studded with scarlet tags and their lips smeared with cake. Even Loren expresses surprise at the crowd.

A three-year old attendee, Zadie, plans on being a mermaid doctor for Halloween, and possibly for the rest of her life. I ask her what she had expected: She had thought that the Feejee Mermaid would be “sparkly.” But, she tells me, “she’s still pretty.”

Another curator, Castle McLaughlin, isn’t surprised at the crowd’s mermaid craze. “I saw just the other day a YouTube video claiming to show a real mermaid,” she says. “The myth still lives.”

This particular incarnation of the myth was reportedly created by Japanese fishermen in the early 1800s. Since then, she’s passed through several owners, who tried and failed to make their fortunes exhibiting her around America and Europe. The last, Moses Kimball of the Boston Museum, along with his frenemy, P. T. Barnum (the age’s leading connoisseur of gross hoaxes), finally turned a profit by showcasing her in Barnum’s freak show. It was Kimball’s descendants who donated her to the Peabody in 1897, when the Boston Museum closed due to a fire.

Whether she is the “real” Feejee Mermaid that Kimball and Barnum exhibited, or a hoax of a hoax, is “unclear” according to Loren. Regardless, she’s credited with “spurring the Victorian mermaid craze that led to lots of other people constructing mermaids.” The Peabody’s other mermaid (affectionately dubbed the Merman because of the fuzz decorating his upper lip) is another product of this fad, as are the roughly 15 other specimens in the U.S.

Even if she lacks the creamy complexion and luscious red locks of Disney’s Little Mermaid, even if she fails to illustrate any true biological phenomena, the Feejee Mermaid beautifully exemplifies the history of museums. “From the cabinet of curiosity in the 16th century to the movement to a public museum,” Loren says, “museums speak to both education and entertainment—they were zoos, natural history, oddities… a bit of everything.” As much hybrid, in other words, as the mermaid herself.

She’s more than just a pretty face or an inspiration for Halloween costumes. Loren sees her as one of the Peabody’s star performers, and as “a great way to share the importance of knowledge and creativity, about museums being places of stewardship and engagement with different communities. Our goal of educating the Harvard community is just as important.”

The mermaid will return to the public eye in April for another exhibition at the Peabody. Until then, Loren says, “she’s going back home” for a break.