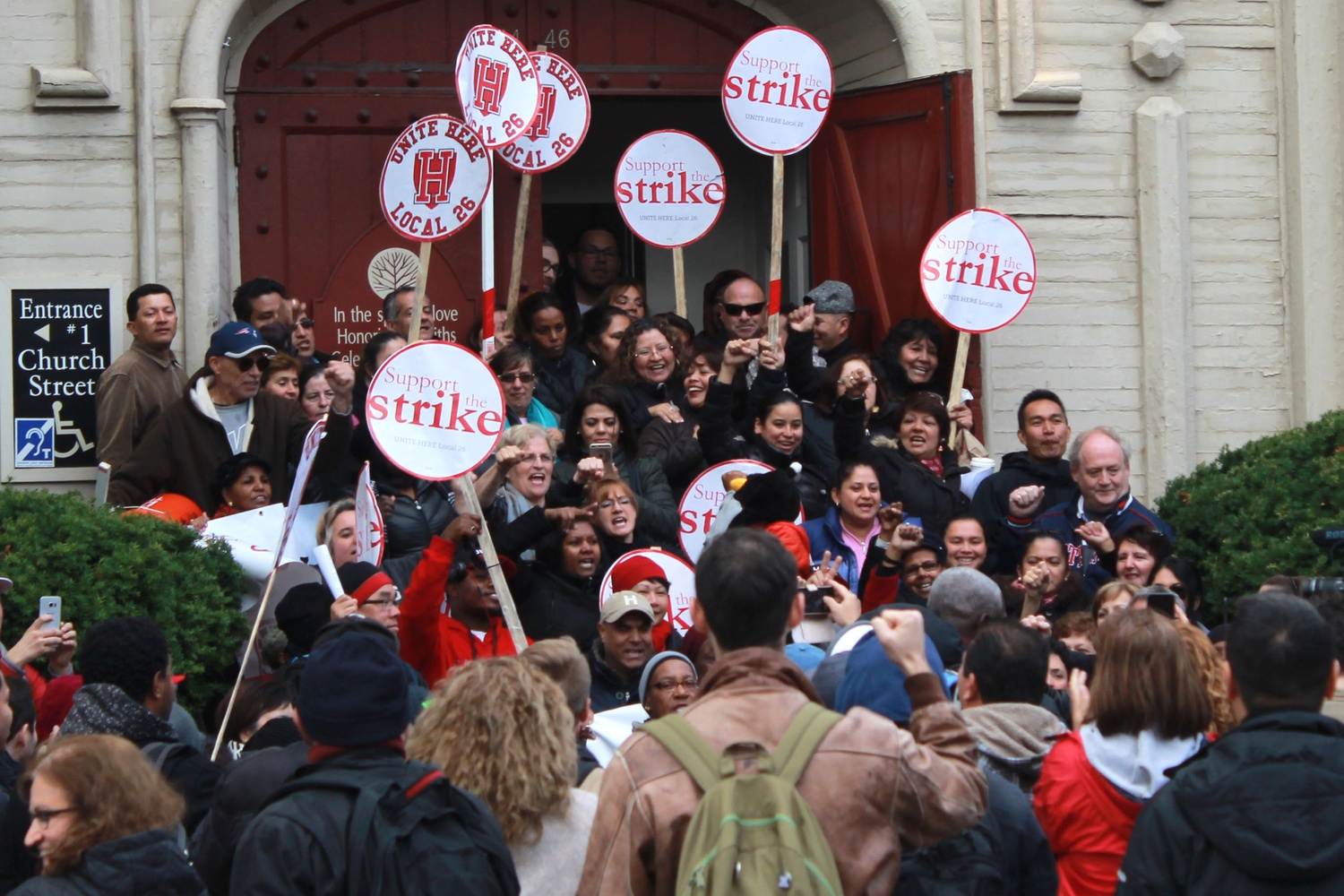 HUDS employees and union members celebrate at the contract announcement rally on the steps of First Parish Church Wednesday afternoon. By Savannah I. Whaley
By Hannah Natanson, Crimson Staff Writer

A 22-day dining worker strike officially ended Wednesday after employees voted overwhelmingly to approve a new contract with Harvard, capping off months of tense negotiations with the University.

Workers could return to the dining halls as early as Thursday morning, according to Brian Lang, the president of UNITE HERE Local 26, the union that represents the Harvard University Dining Services employees.

The final vote by union members was 583-1 in favor of the contract, according to Carlos R. Aramayo, financial secretary treasurer of Local 26, who took the official tally of voters’ paper ballots. The voting, held at First Parish Church, began at 2 p.m. and closed at 5 p.m.

With their agreement Wednesday, Harvard and its employees brought an end to a historic strike that roiled campus, closed dining halls, and drew widespread national attention.

The last official day of the strike was a joyous one for HUDS workers, many of whom said they felt the agreement met all of their demands, which included raising the minimum worker’s yearly salary to $35,000 and providing consistent summer pay for employees. Celebrations began at 2 p.m. outside the church, when Lang reported the details of the new contract to the assembled crowd of roughly 100 HUDS employees and student supporters.

Lang announced, to cheers, that the union had “achieved every goal, without exception” at the close of negotiations. He added that the favorable result was a “testament to when working-class people make a decision to draw a line in the sand,” but also a “particular testament” to HUDS workers’ strength.

“What started out as simple proposals, reasonable proposals for us to be able to provide for ourselves and our families turned into a struggle for the soul of this institution,” Lang said. “It garnered worldwide focus and attention and we’re happy to report that, in this battle, the forces for equality, justice, and a humane approach prevailed.”

Those present began to cheer as soon as Lang finished speaking, jumping up and down while waving signs reading “Support The Strike.” Workers hugged and thanked the handful of students—mostly members of the Student Labor Action Movement, the organization that coordinated undergraduate efforts to back the strike–who joined them outside the church.

“I’m still on cloud nine, I can’t believe it, I love the contract,” Anabela A. Pappas, a HUDS worker, said as she wiped tears from her eyes. “It’s been emotional for three weeks. But today is a good, happy, emotional day.”

Pappas, along with other HUDS employees, said she felt closer to people on campus, from students to faculty members to the shop-owners in Harvard Square, after the strike.

“Now I walk through Harvard Square, it’s a new Harvard Square for me,” Pappas said. “I used to walk through the square, no one knew me, we never said ‘Hi’ to each other. Now you walk a couple of inches and everyone’s like, ‘Hey, Bella!’”

“This win is all the workers, this win isn’t about the students,” she said as she embraced HUDS employees outside the church. “I’m so proud of [the workers], and I’m so proud to be a member of the Harvard community today.”

Though the crowd outside First Parish Church dispersed soon after Lang’s speech, the day was not yet over. HUDS workers continued to file into the building to place their votes until 5 p.m. At 5:30 p.m., Aramayo announced the final count to the room, drawing cheers from the few remaining Local 26 members present.

Students eating in dining halls across campus Wednesday evening said they were glad to hear that HUDS workers would soon return to work. Some said they were particularly excited for the food.

Raahul Acharya ’20 said he had frequently chosen to eat out at restaurants during the strike and added that his life was “going to get much better now that I have a stable source of food.”

“I’m really glad that after all these negotiations, they were finally able to reach a resolution,” Kaitavjeet Chowdhary ’17 said. “It will be great to have the workers back and have that sense of community again, and obviously to have the food back again.”