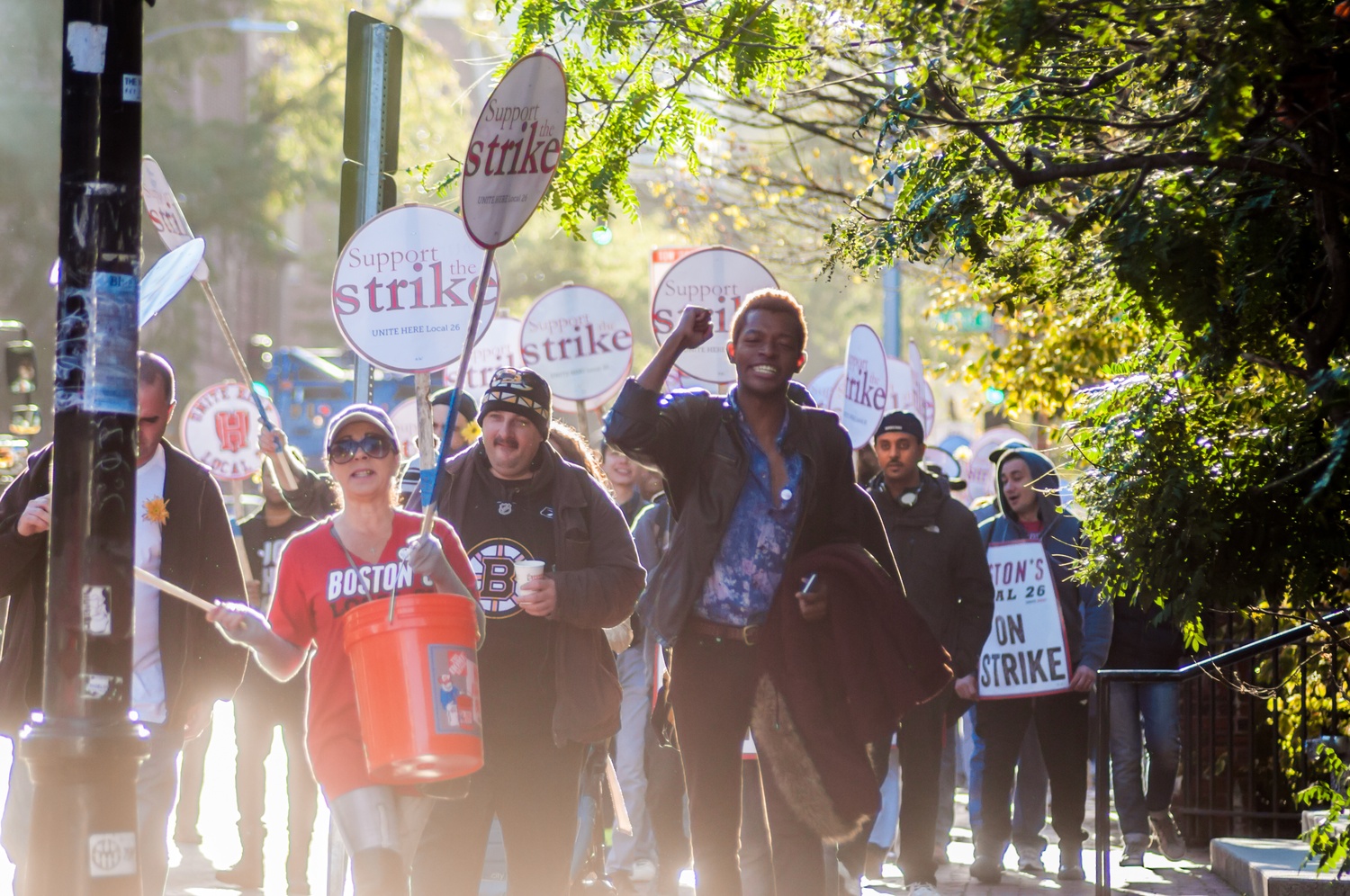 HUDS workers and student supporters chant "Hey Harvard you can't hide; we can see your greedy side," as they march through Harvard Square. The HUDS strike began at 6 a.m. Wednesday morning. By Annie E. Schugart
By Brandon J. Dixon and Hannah Natanson, Crimson Staff Writers

The workers’ strike marks the first time they have walked off the job during the academic year, according to Brian Lang, president of UNITE HERE Local 26, the Boston-based labor union that represents HUDS. The strike is the first walk out Harvard has seen since 1983, according to Lang.

According to Lang, around 500 dining service employees checked into picket lines across the campus as of about 8 a.m. using strike identification cards. There are about 750 total HUDS workers.

Lang and Ten Eyck also confirmed that as of about 8 a.m. they were not aware of any dining services workers that had reported for work.

Local 26 negotiator Michael Kramer gave opening remarks at the rally, calling for an increase in HUDS employees’ wages. “At this, the richest university in the world, no worker that is here and that is ready work should be making less than $35,000 a year,” he said.

Anabela A. Pappas, a HUDS worker stationed in Pforzheimer and Cabot Houses, followed Kramer. She said that HUDS employees would rather be “in the dining hall feeding the students” than outside rallying, and that Harvard had forced workers into striking.

“All the money they have, and they still want to squeeze every bit out of us,” she said. “You greedy people. This is what you caused, not us. We didn’t want to be here.” 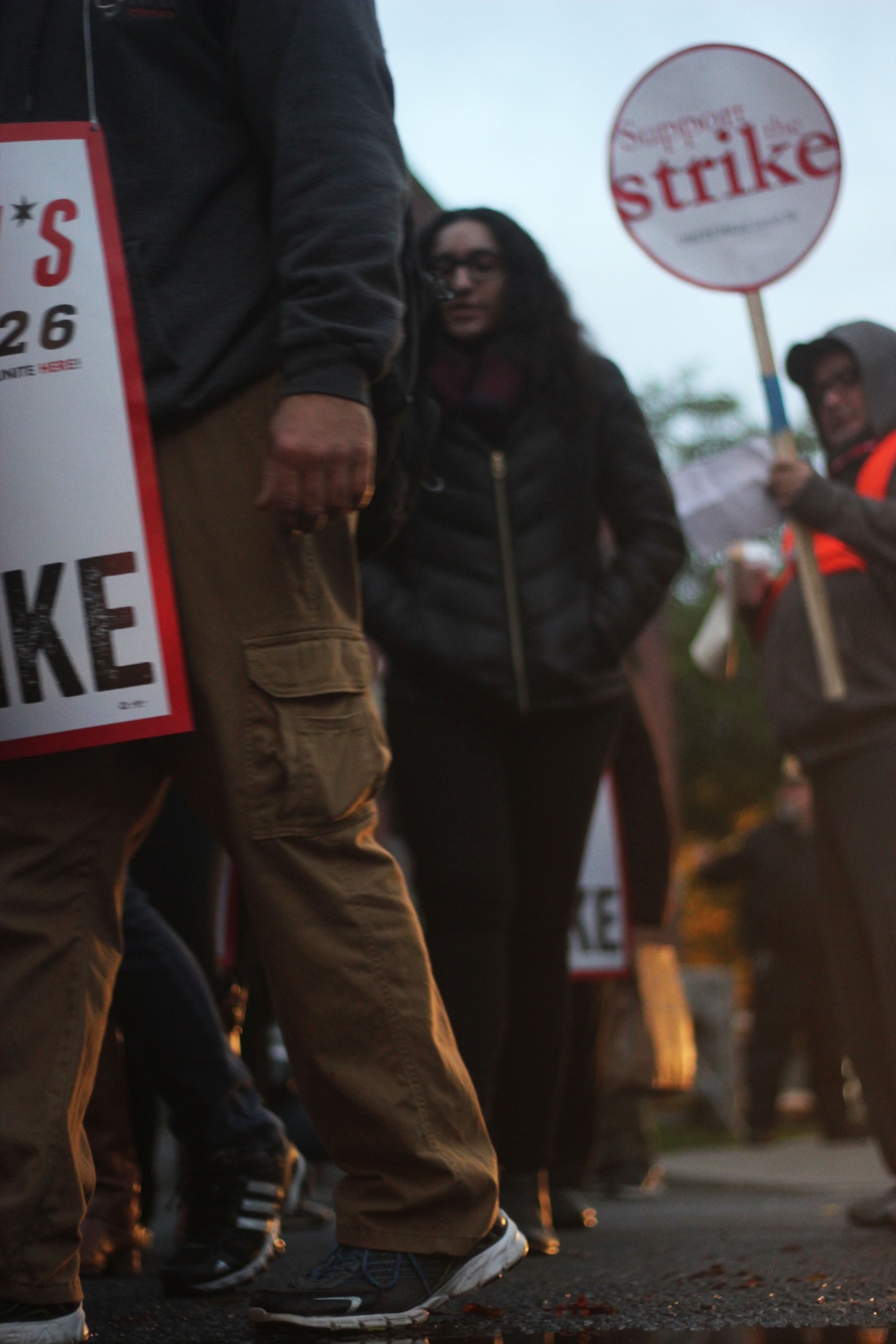 By Lauren A. Sierra
Advertisement

Over the course of the months-long bargaining—which began mid-June—Harvard and union negotiators have faced a stalemate over wages and health benefits.

University spokesperson Tania deLuzuriaga wrote in an emailed statement that Harvard has “proposed creative solutions to issues presented by the union, and hoped union representatives would contribute to finding creative, workable solutions at the negotiation table.”

She added: “They have been unwilling to do so. We are disappointed that they have been more interested in planning a strike than working on a solution that meets the needs of their members and the wider community.”

Harvard and HUDS will continue bargaining during the strike, according to Lang. He said both Local 26 and the University have established a “framework” for making progress on the negotiations. Their next session is scheduled for Thursday afternoon, according to deLuzuriaga.

Over the course of the day, HUDS employees picketed at dining halls and around Harvard Yard, carrying Local 26 signs and shouting chants. They planned to picket at 16 different locations on campus, including each of the upperclassman dining halls and Annenberg, the freshman dining hall.

Kerry Maiato, a HUDS employee who typically works in Annenberg, stood outside one of the union’s RVs while picketing.

“I feel the strike is important just off of myself and my family,” said Maiato. “I have two children, three and nine years old, and I feel like affordable health should be a basic human right that everyone is entitled to. That’s why I’m striking today, it’s for my children and my family."

“At every dining hall you do see workers and students, members of this community standing together and standing with HUDS, and I think that’s really powerful,” said Grace Evans ’19, a member of SLAM and a student in Mather House.

Other members of SLAM handed out flowers to striking workers behind Annenberg.

Dean of Students Katherine G. O’Dair, who stood in front of Mather House Wednesday morning, said she sees her role today as "supporting the students in their choices."

Dean of the College Rakesh Khurana wrote in an email to undergraduates Wednesday that he believed debate over the workers’ strike was a testament to “free expression” but stressed that College affiliates should be respectful.

“As always, we want to encourage dialogue that is respectful,” Khurana wrote. “In this community — made up of students, administrative staff, faculty, residential staff, and our dining hall workers, how we treat each other in challenging times matters deeply.”

He wrote that the College's priority was its students' “health and well-being.”

Two outside mediators—Lawrence F. Katz, a Harvard economics professor, and Robert B. McKersie, professor emeritus at MIT’s Sloan School of Management—will attend additional bargaining sessions between the two parties, according to deLuzuriaga. Those same mediators also helped facilitate the 2015 negotiations between Harvard and its largest employee union, the Harvard Union of Clerical and Technical Workers.

Thus far, HUDS negotiators have demanded year-round work and a minimum salary of $35,000 for those who wish to work the whole year. In addition, HUDS has asked Harvard not raise out of pocket health costs.

In a bargaining session Monday, Harvard proposed a summer stipend that would provide HUDS workers available to work during the summer anywhere from $150 to $250 per week, “even if there are no open shifts.” The amount of the stipend would depend on the worker’s tenure at the University.

Lang said in an interview Wednesday morning that this proposal was a “step in the right direction.”

The HUDS workers were joined by at least two other labor groups in their picket and rally. Aryt Alasti, a security guard, said members of SEIU 32BJ—which represents Harvard’s guards and custodians—had been encouraged to picket in support of HUDS during their off hours. Graduate student Aaron T. Bekemeyer, carrying a Harvard Graduate Student Union-United Auto Workers banner, said members of the unionization effort were also supporting the HUDS workers.

“We’re all workers. We’re here in solidarity with them,” Bekemeyer said.

Additionally, in a memo sent to HUCTW employees, Bill Jaeger, the union’s executive director, pledged support to Local 26, but cautioned union members against neglecting their own work schedules to participate in the strike.

“At the same time, HUCTW is not on strike — HUCTW members are expected to report to work as scheduled on Wednesday, and to work all scheduled hours during an Local 26 action that may take place,” Jaeger wrote.

While outside workers picketed, at least one dining hall served hot breakfast. In Lowell House, students could enjoy items such as waffles and home fries, marking the rare weekday appearance of hot breakfast in an upperclassman House.