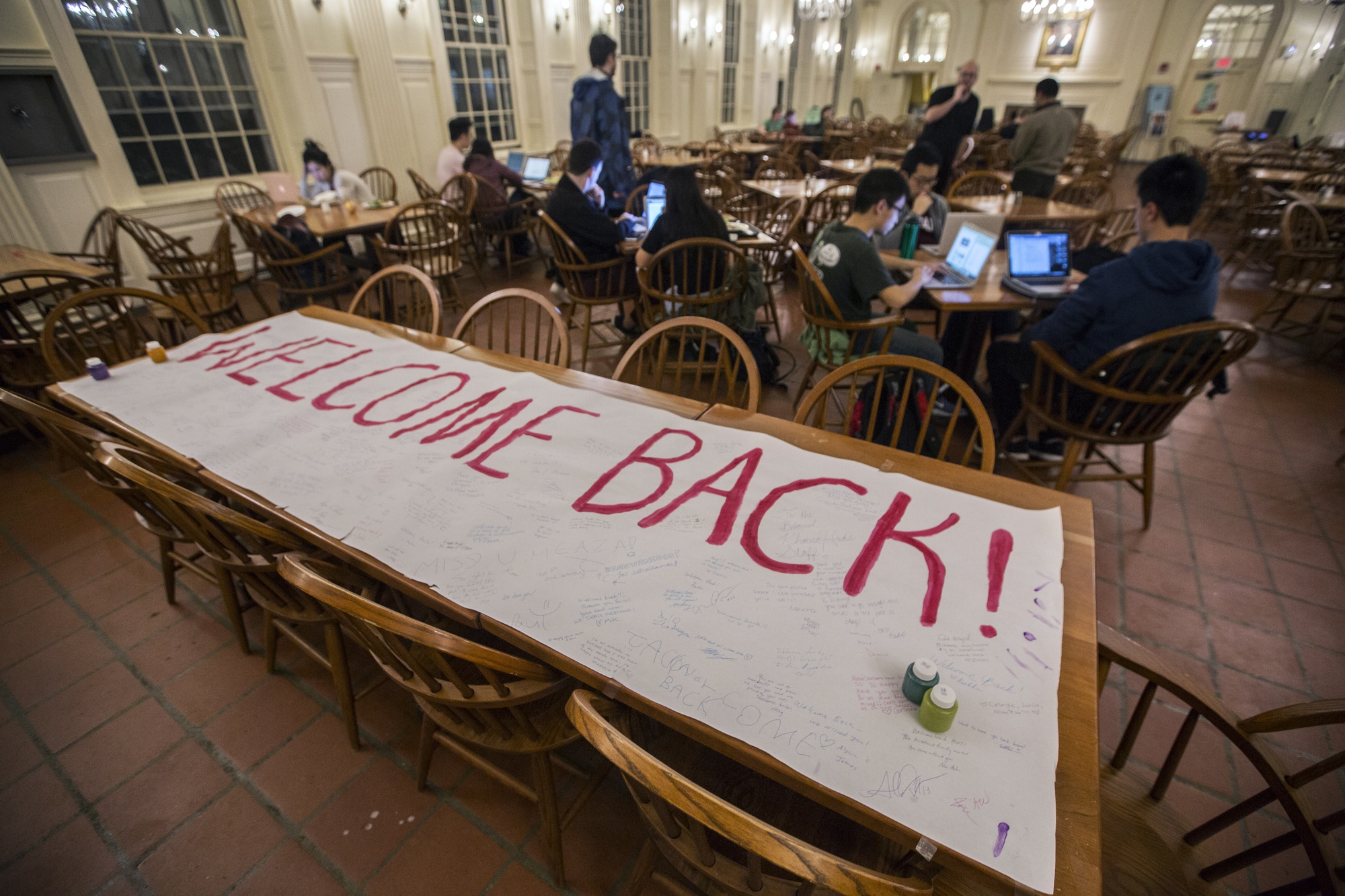 "Welcome back! So in awe of your courage and determination," wrote one student on a welcome banner in Kirkland dining hall. Students celebrated HUDS workers returning to the dining halls after the 22-day long strike which ended Wednesday. By Annie E. Schugart
By Brandon J. Dixon and Hannah Natanson, Crimson Staff Writers

Harvard’s dining services workers returned to dining halls Thursday morning—less than 24 hours after ending their historic strike—where they were warmly welcomed back by students.

HUDS employees voted 583-1 this past Wednesday to ratify a proposed contract with the University that officially ended the strike. The new settlement established a $35,000 minimum annual salary for full-time HUDS workers and prevented any increases in healthcare copayments for the next five years. 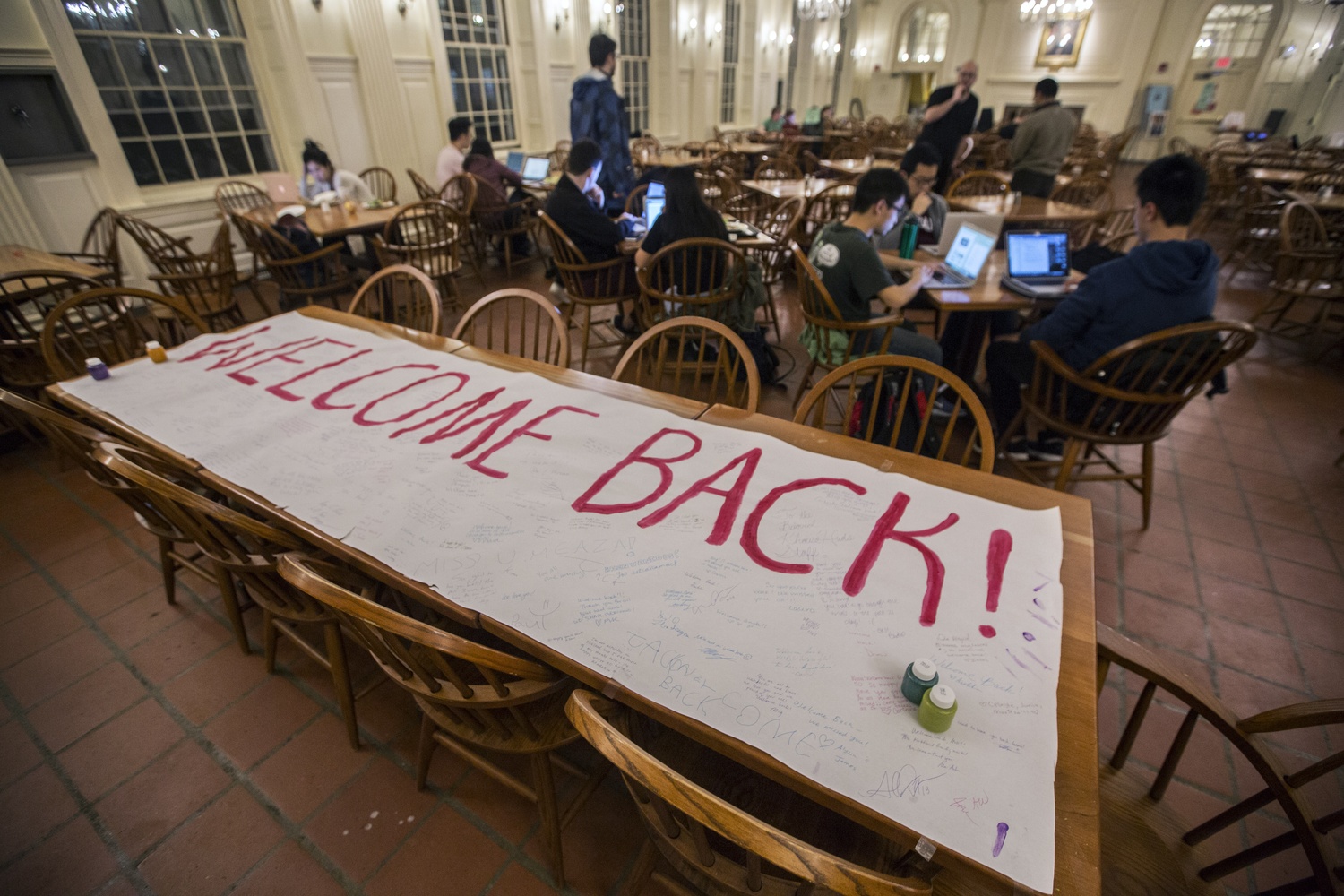 "Welcome back! So in awe of your courage and determination," wrote one student on a welcome banner in Kirkland dining hall. Students celebrated HUDS workers returning to the dining halls after the 22-day long strike which ended Wednesday. By Annie E. Schugart

Employees in dining halls across campus said they were happy to be back at work as they prepared and served lunch Friday afternoon.

Alexis A. Martinez, a chef in Winthrop House’s dining hall, said he had so far found the transition to be “smooth” and “easy.”

In an email, University spokesperson Tania deLuzuriaga wrote that "HR has been working with managers in reentry of HUDS employees."

Hernandez and Martinez emphasized that, on the whole, they were delighted to be working again. Both said they felt they had received a warm welcome—Hernandez from Harvard faculty, Martinez from undergraduates.

“I think everyone can agree, whether they support the strike ideologically or not, that it’s great having [the HUDS workers] back, and not just because the food was different, but because it feels like a different place without them there,” Maldonado said.

Robert Miranda ’19, too, said the workers’ return had changed the atmosphere in the dining halls.

“I sort of missed the bustling attitude back in Annenberg [during the strike],” Miranda said. “I think it was a bit dead and empty before. Its kind of recaptured its former excitement.”

Students said they were especially pleased that the quality and diversity of meal offerings—which suffered during the strike—had returned to their normal state.

Westley K. Cook ’19 said he “made a beeline for the grille” the moment the dining halls reopened. Sung M. Ahn ’19 added that he had forgotten how much he loved eating from “real plates,” rather than disposable dishware.

As she finished up her lunch in the Inn at Harvard on Friday, Jessica R. Fournier ’17 said she was “incredibly proud” of HUDS employees for achieving “everything they wanted.”

“These are the people that I think students feel the closest to here,” Fournier said. “I know for myself I certainly feel way closer to HUDS workers than I do to a lot of other people, and I think that’s true for many students that are from working class backgrounds, like myself, or for students that are low-income or of color.”