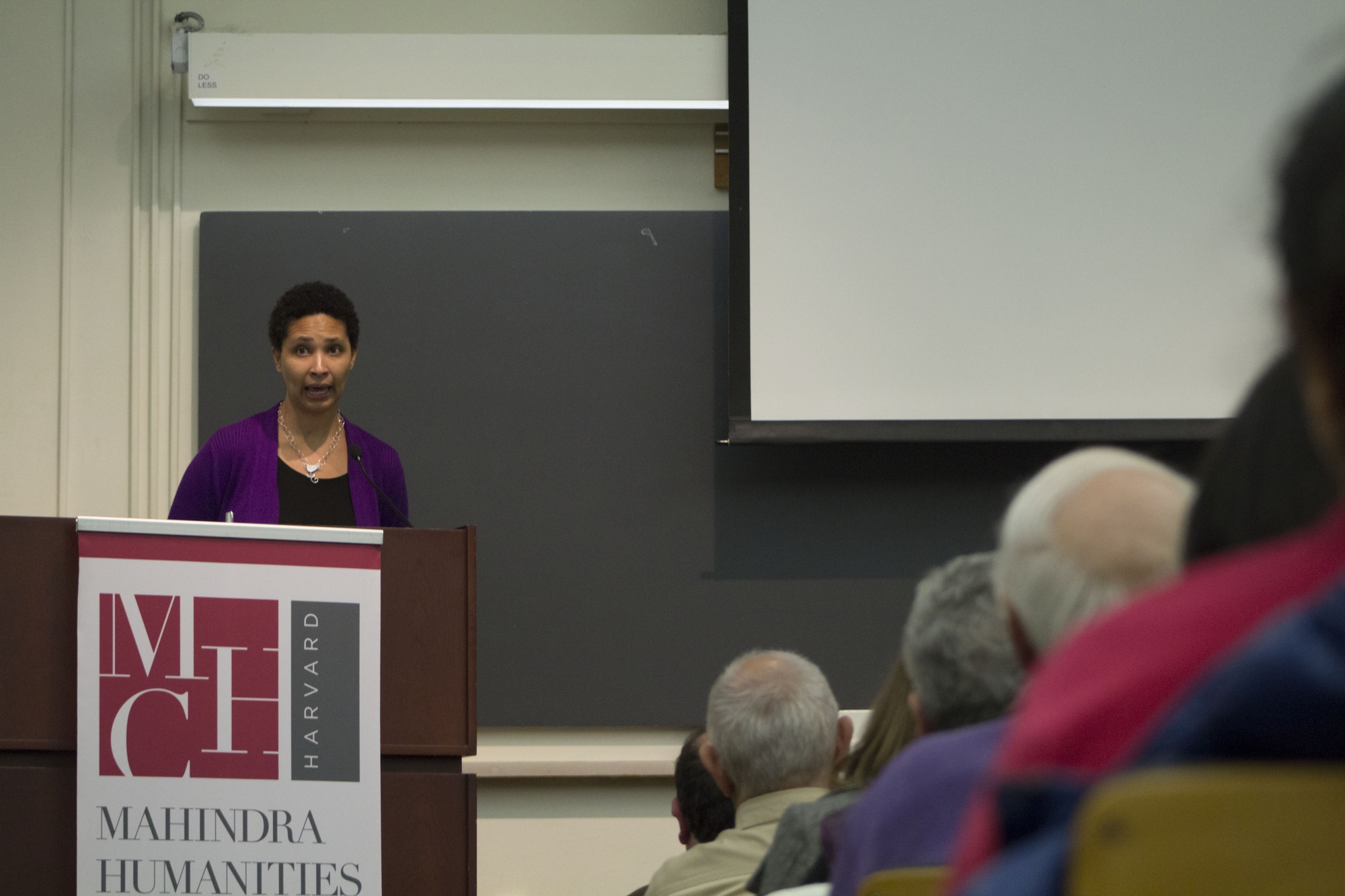 Safra Center for Ethics Director Danielle S. Allen read from her op-ed published in the Washington Post today in reflection on the recent presidential election. She spoke at a Mahindra Center event where fellow scholars Jill Lepore and David I. Laibson ’88 also shared their takes on Trump’s election.
By Harshita Gupta, Crimson Staff Writer

The panel, titled, “Dark and Stormy: Reflections on the Election,” which took place Wednesday night, filled seats with attendees from across Cambridge.

Safra Center for Ethics Director Danielle S. Allen read from her op-ed published in the Washington Post today in reflection on the recent presidential election. She spoke at a Mahindra Center event where fellow scholars Jill Lepore and David I. Laibson ’88 also shared their takes on Trump’s election. By Sidni M. Frederick

Lepore began the discussion by tracing the history of polls to political journalism of the 1930s, speaking to how their accuracy has dropped since then. She addressed their inaccuracy in the 2016 presidential race, saying that while polls in the 1930s had a 90 percent response rate, polls today have a response rate in the single digits.

“The accuracy of polls is much worse than it has ever been, which is why there’s so many aggregators like Nate Silver,” she said. “They are just trying to correct the inevitable distortion of polls because people refuse to participate in them. Polls have been wrong all over the world for the last three years repeatedly, yet polls are relied upon and have influenced the American political process more than ever before.”

Laibson followed up on Lepore’s comments with research on the economic motives that could explain Trump’s victory. He pointed out that Trump voters were overwhelmingly individuals who had lost faith in the economy, showing the audience charts illustrating wage decrease for American males without college degrees over the last 50 years.

“For a lot of people in our country, what we think of broadly as the American dream... is slipping away,” he said. “If we look at the generations that we can observe and the generations to come, most children’s life quality will diminish relative to their parents. That’s possible because the gains from economic progress are going to a very small set of elites, well represented on this campus, and not going to the vast majority of our population.”

Allen highlighted the increased divide in educational opportunities across the country, saying that opposing sides had failed to listen and empathize with each others’ plights.

“We face the question of ‘can we fashion’ our social and economic relations to support liberty and justice for all?” she said. “In this election, rural Americans, and Americans without college degrees, sought release from a system of inequality. Sadly, their fine aspirations have gotten wretchedly mixed up with the desires of the David Dukes among us, among them, the President-elect.”

Andrew H. Bellisari, a graduate student in the History Department, said he came to the event to debrief the day after the election and process his thoughts. Bellisari thought that the candidates intelligently examined the circumstances around the election, but still thought that Dark and Stormy confirmed many stereotypes Trump supporters might believe about Harvard.

“Here is all of Harvard, Cambridge—educated elite coming here and, freaking out, quite frankly, about what has just happened,” he said. “I could almost see the Facebook posts of certain family members or friends taking extraordinarily sick pleasure in watching us deconstruct this moment the way we have.”