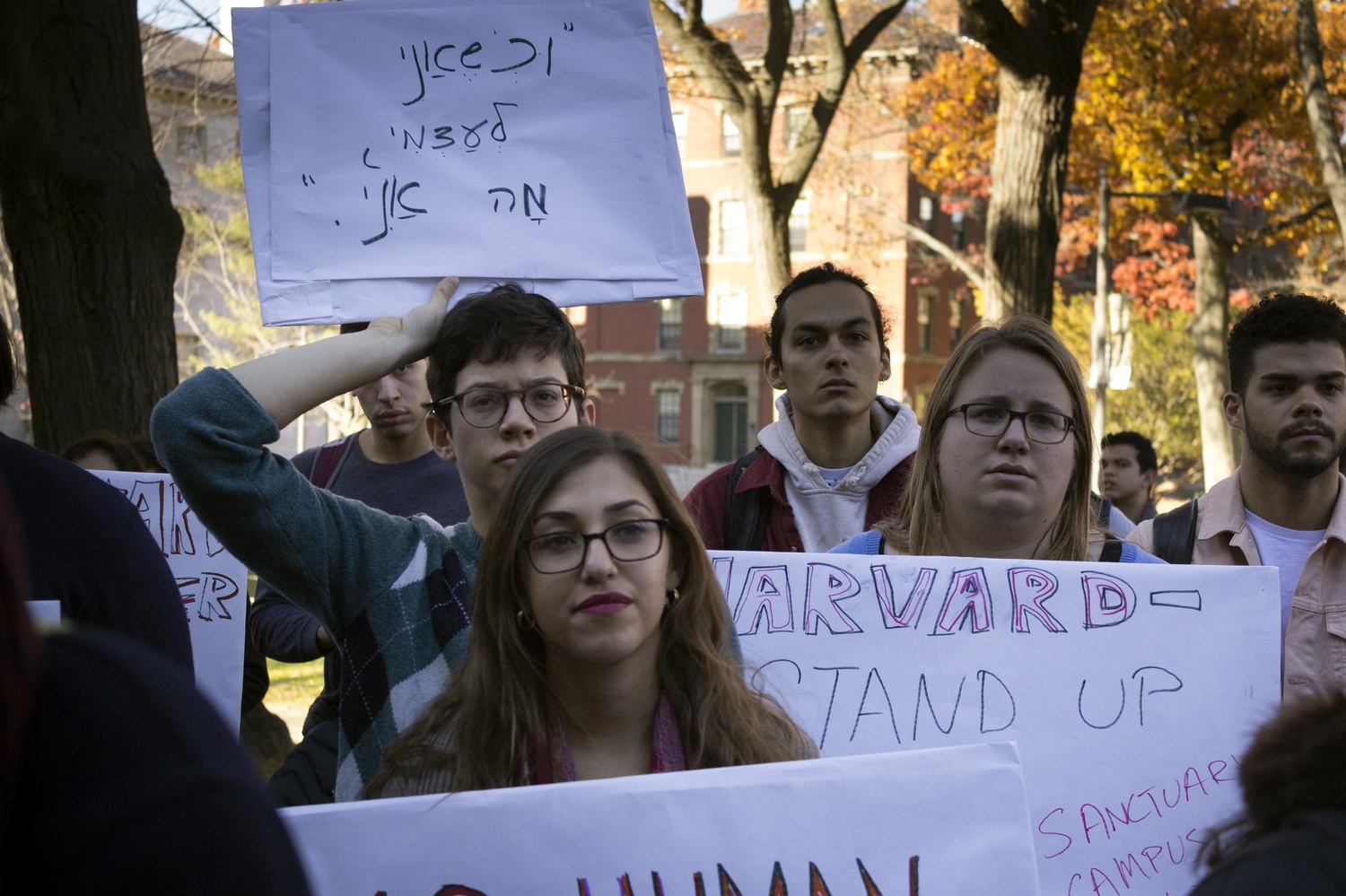 More than 100 supporters gather on the steps of Widener Library to advocate for the defense of undocumented students at Harvard. By Thomas W. Franck
By Marella A. Gayla, Crimson Staff Writer

Cheering and linking arms, about 200 people congregated on the steps of Widener Library Monday and called on Harvard to protect undocumented students after Donald Trump’s victory in the presidential election.

Trump’s win provoked surprise and concern across Harvard’s campus, stirring anxiety among students of color in particular. Of the roughly 40 undocumented students at the College, several have expressed fears of being deported with Trump—who has proposed building a wall between Mexico and the United States, among other anti-immigrant policies—in the White House.

Students in Spanish 126: “Performing Latinidad” planned the protest and wrote an accompanying petition to Harvard administrators that has collected more than 4,000 signatures. The course, which examines Latino identity in arts and literature, incorporates performance art and activism in its curriculum.

“The protest came out a lot better than planned,” said Enrique Ramirez ’17, an undocumented student and protest organizer. “I think the turnout represents the feelings people have, and a disposition to get involved after the election.”

Five students gave speeches at the demonstration, describing their own experiences of growing up undocumented and the significance of Trump’s anti-immigrant platform for their own lives. 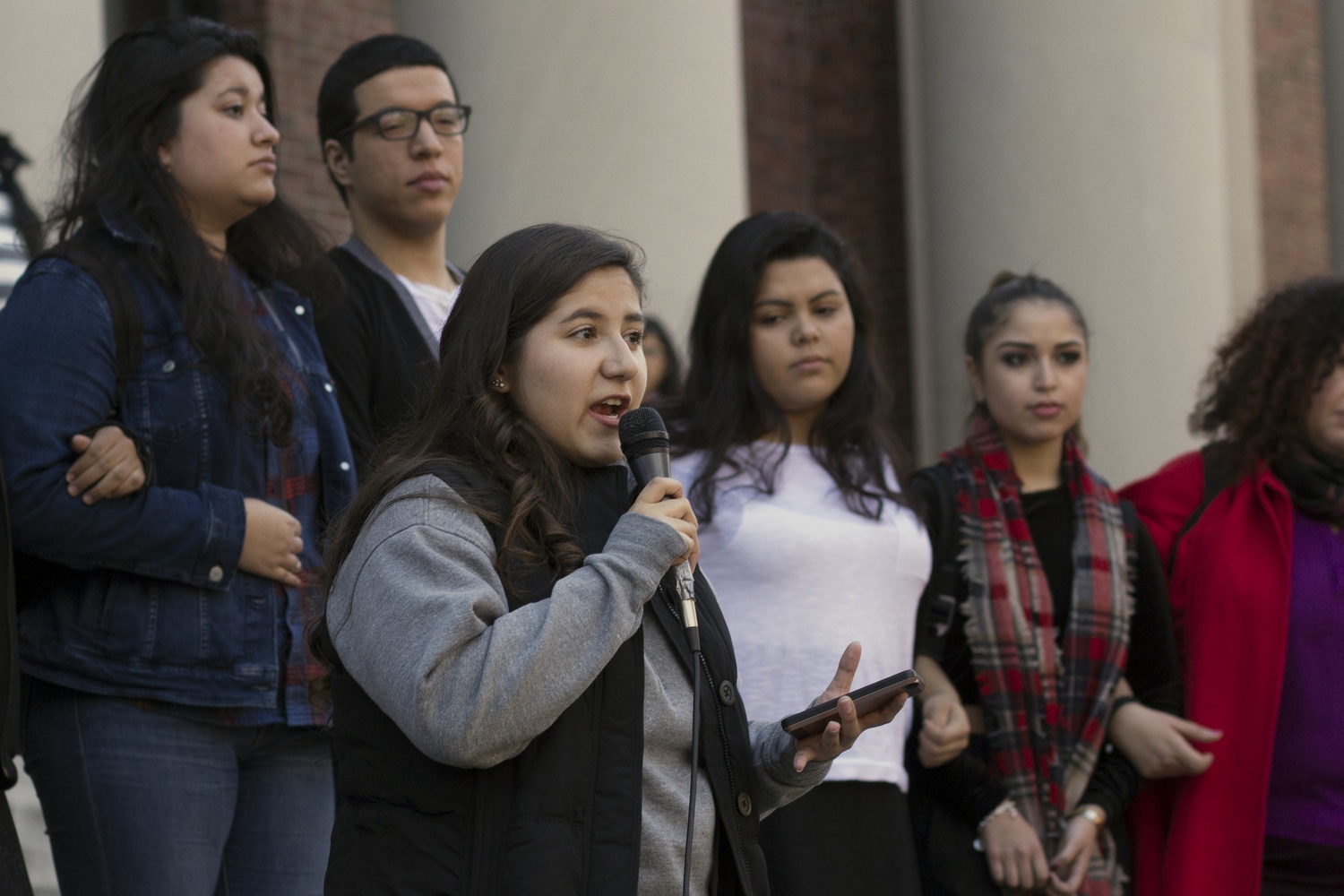 Laura Veira-Ramirez '20 speaks to the crowd gathered on the steps of Widener Library about the trials she and her family have faced living in Connecticut as undocumented immigrants. By Thomas W. Franck

Laura Veira-Ramirez ’20, who has been involved in immigration advocacy since she was in high school, urged the audience to “fight” the anti-immigrant rhetoric that helped propel Trump to victory.

“The fact that people didn’t think of [his victory] as a reality allowed this to happen,” Veira-Ramirez said. “We have to fight now, and we should have started fighting a long time ago.” 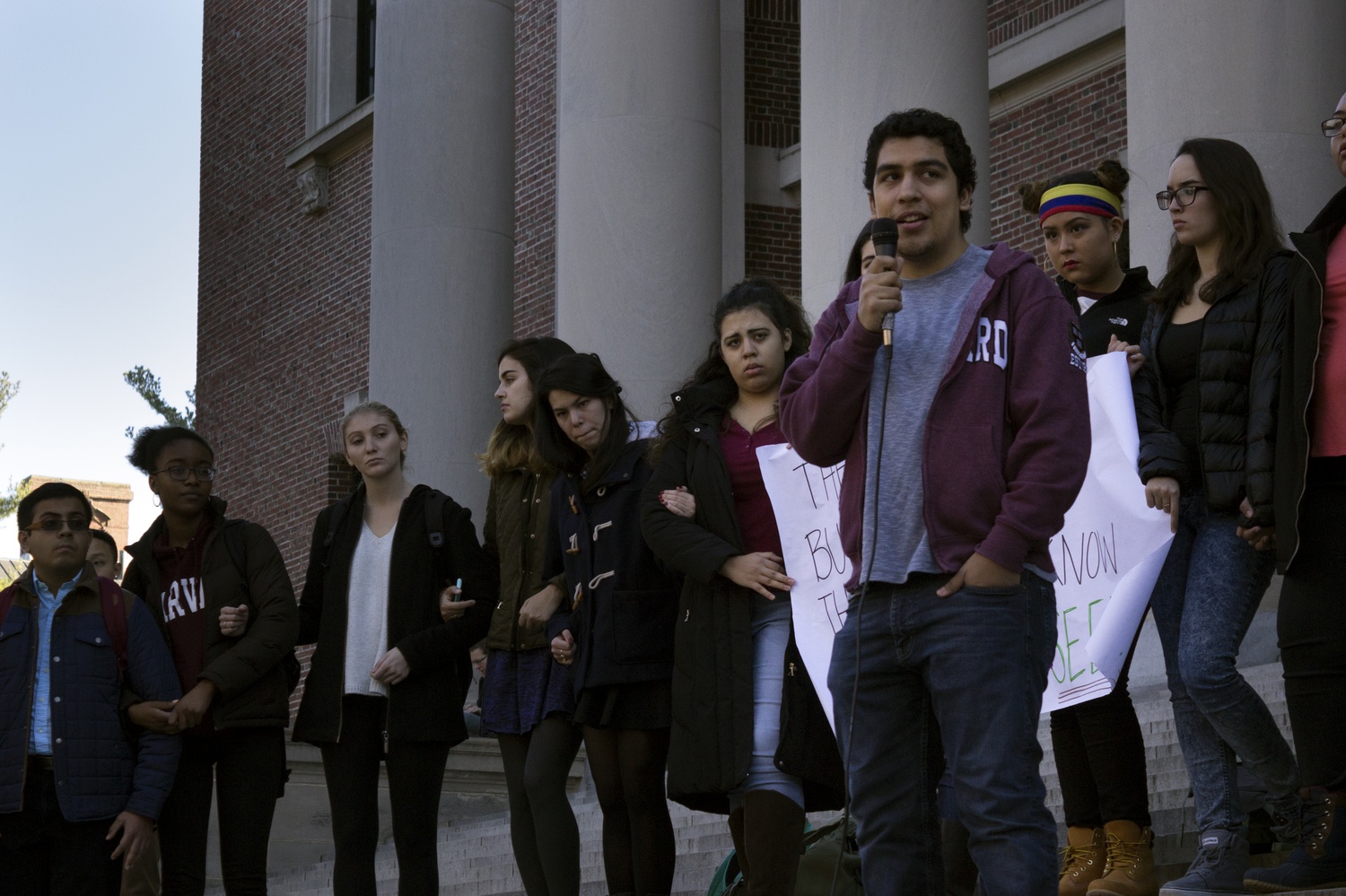 Bruno Villegas '19 speaks on the steps of Widener Library. By Thomas W. Franck

After the speeches ended, dozens of demonstrators marched to University Hall to deliver the petition to administrators, chanting, “Say it loud, say it clear, immigrants are welcome here.” Protesters successfully submitted the petition to administrators, and Dean of the College Rakesh Khurana and Dean of Undergraduate Education Jay M. Harris reached out to protest organizers and scheduled a meeting for Friday, according to organizers.

Khurana joined other faculty in standing among protesters at Widener Library. He said he is “deeply concerned” over the fate of the Deferred Action for Childhood Arrivals, a government program that allows many of Harvard’s undocumented students to work, drive, and reside legally in the U.S

The petition describes Trump as “an imminent threat” to DACA and argues that Harvard’s commitment to diversity is now “more pressing than ever.” 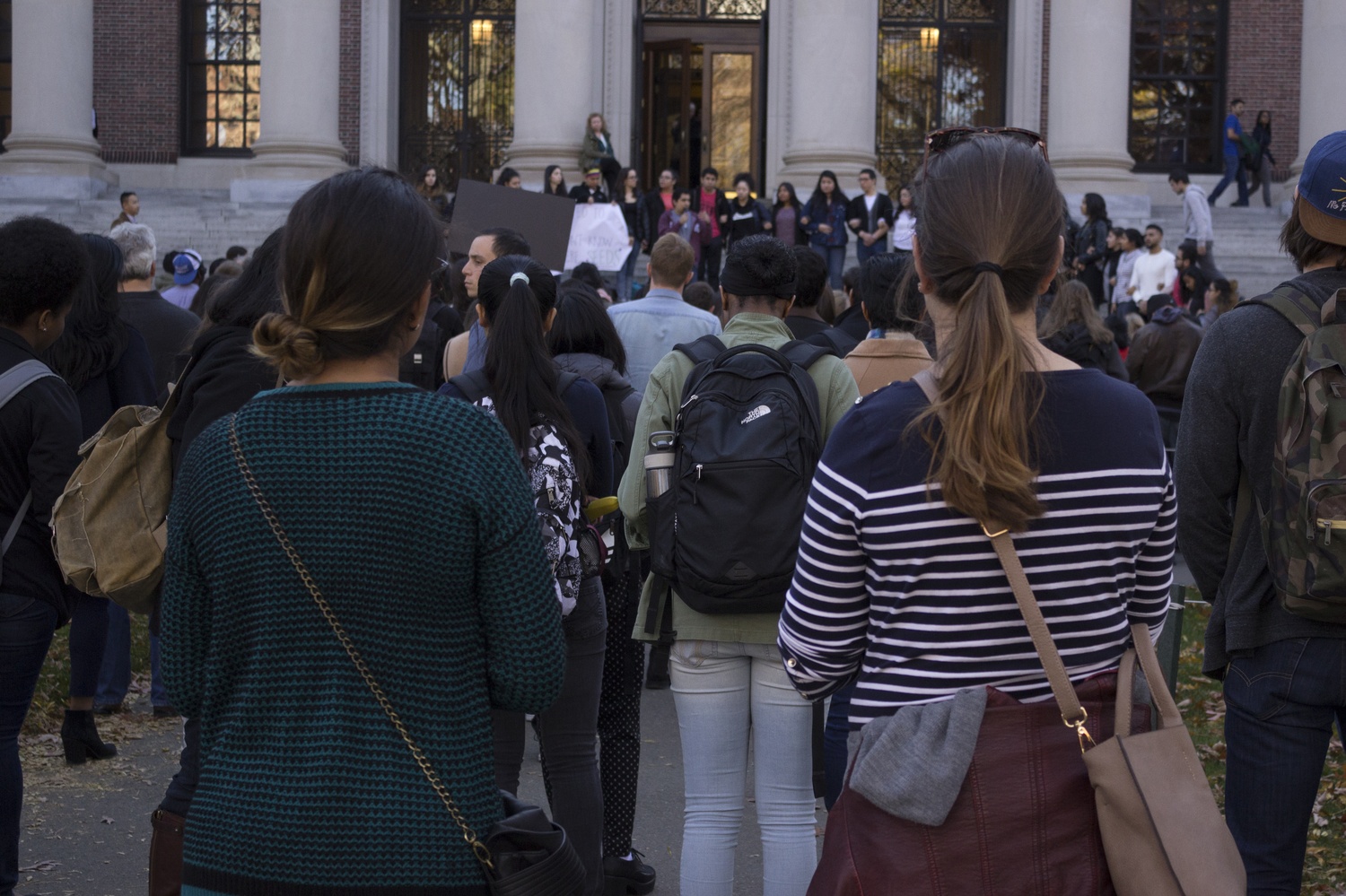 As hundreds collected outside of Widener Library, undocumented Harvard students took turns encouraging the university to protect its diverse community following the election of Donald Trump. By Thomas W. Franck

Calling for “concrete action” rather than “sympathy,” the petition demands the hiring of a new Assistant Dean of Equity, Diversity, and Inclusion and the creation of an office to support undocumented students.

“The College... is currently working to identify and consolidate resources and connect undocumented students who have specific questions and needs,” Khurana wrote in an email.