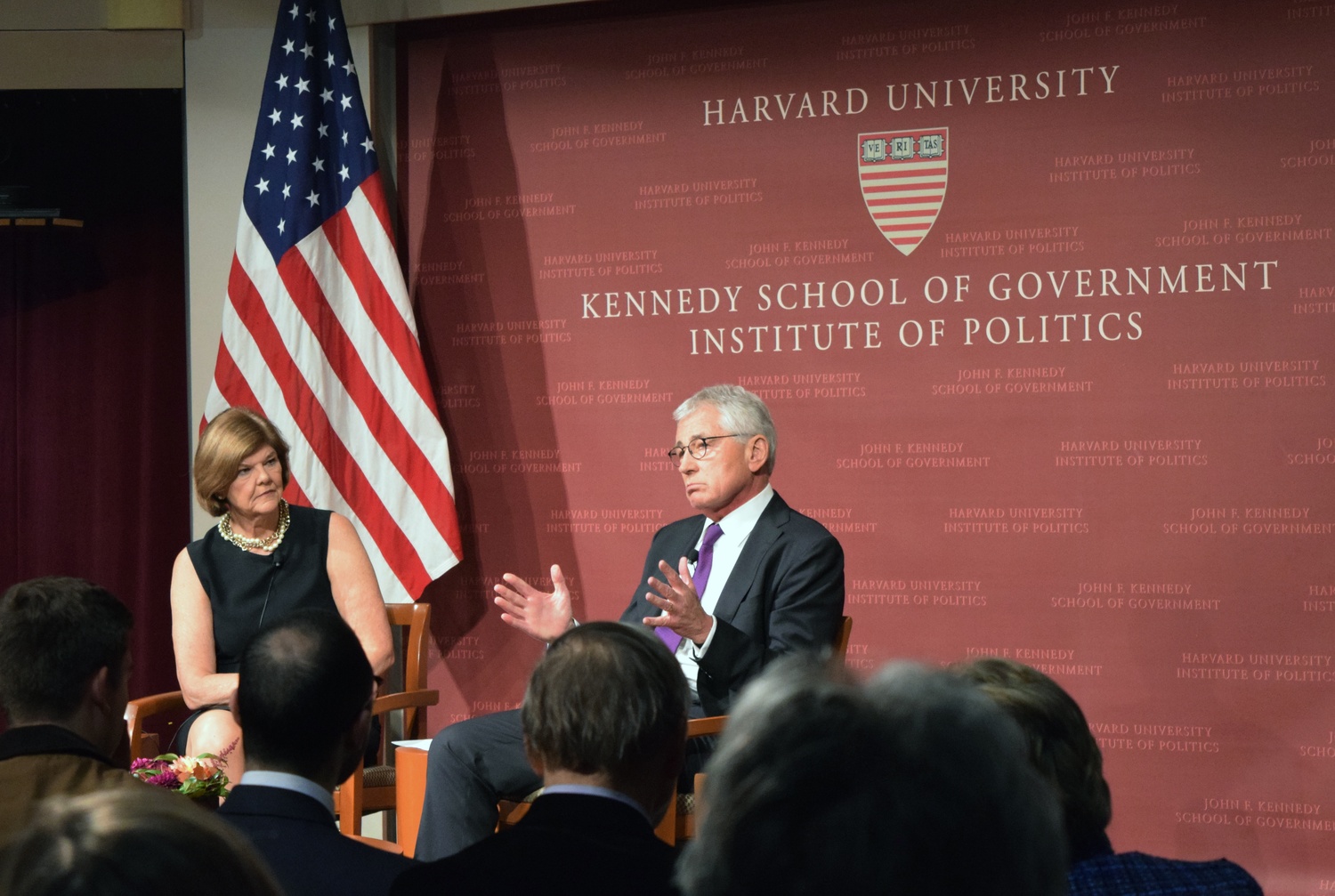 Charles T. Hagel, former US Secretary of Defense, answers questions about his nomination process at the IOP on Tuesday night. Hagel is a visiting fellow at the Institute of Politics. By Jessica M. Wang
By Lucas Ward and Andrew J. Zucker, Contributing Writers

Hagel, who was President Barack Obama’s Secretary of Defense from 2013 to 2015, previously served as a Republican U.S. Senator for Nebraska from 1997 to 2009. A controversial appointment for defense secretary, Hagel resigned after two years under pressure from the White House. He is now a visiting fellow at Harvard’s Institute of Politics.

In an interview with The Crimson on Tuesday, Hagel described the the current state of the GOP as “rudderless” and “leaderless.” He said it is unclear how the Republican Party will convalesce after the upcoming election.

“This is going to be awhile before a new Republican Party center of gravity forms, and I think it’s going to go right into the next presidential election before we see any kind of cohesion. And I’m not sure you’re even going to see it then,” he said.

“[H]e’s not a Republican, he’s not a Republican leader. I mean he’s never led anything. I mean Donald Trump is a product of the environment. He is an instrument and a voice of the tremendous, deep-seated discontent and anger in this country with politics, with Washington, and with government,” Hagel said. “He didn’t lead that movement. He was the voice. So, he’s never been involved in any philosophical or any governmental effort on anything.”

Hagel also touched on the potential for Russian interference in next week’s election. Although Russians could interfere by spreading misinformation and “playing games,” Hagel said it would be hard for Russia to hack polling stations.

“Our balloting is controlled county-by-county in the United States, state-by-state. So there’s no one central computer system where they could hack into and influence votes… the likelihood they could affect any balloting is just not very feasible because it’s so decentralized.”

He encouraged the next president to sit down with Russian President Vladimir Putin.

“I’ve said publicly that the next president of the United States, I firmly believe, needs to sit down directly with President Putin and engage President Putin face-to-face on all these big issues,” he said. “Because these things don't get better, and the Russians are doing things that we haven't seen them do since the Cold War.”

“We are at one of those points that historians will reflect on where there is great distrust in our leaders, in our politics, in almost every institution—except the military,” he said. “I’m not surprised at the political dynamics in play today… our media plays on confrontation and conflict. It’s not really about information or enlightening the public.”

During the interview before the event, Hagel said he is still undecided on who he will cast his ballot for next Tuesday.

“I mean you’ve got the two most vilified, distrusted candidates in the history of America… this is going to be an election about not voting for someone, it’s going to be more about voting against someone.”

Yet, Hagel emphasized he will exercise his right to vote, a right he said he does not take for granted.

“My first vote was cast on a tank in Vietnam in 1968. And I’ve never missed a federal election every two years—I’m not going to miss this one. I haven't even focused on it yet, I’ll vote though.”