Small Group of Harvard Republicans Campaign in N.H., But Not For Trump

The Harvard Republican Club has canvassed in New Hampshire over the weekend, not for its party's nominee but for incumbent Senator Kelly Ayotte, who is in one of the tightest races in the nation.
By Derek G. Xiao 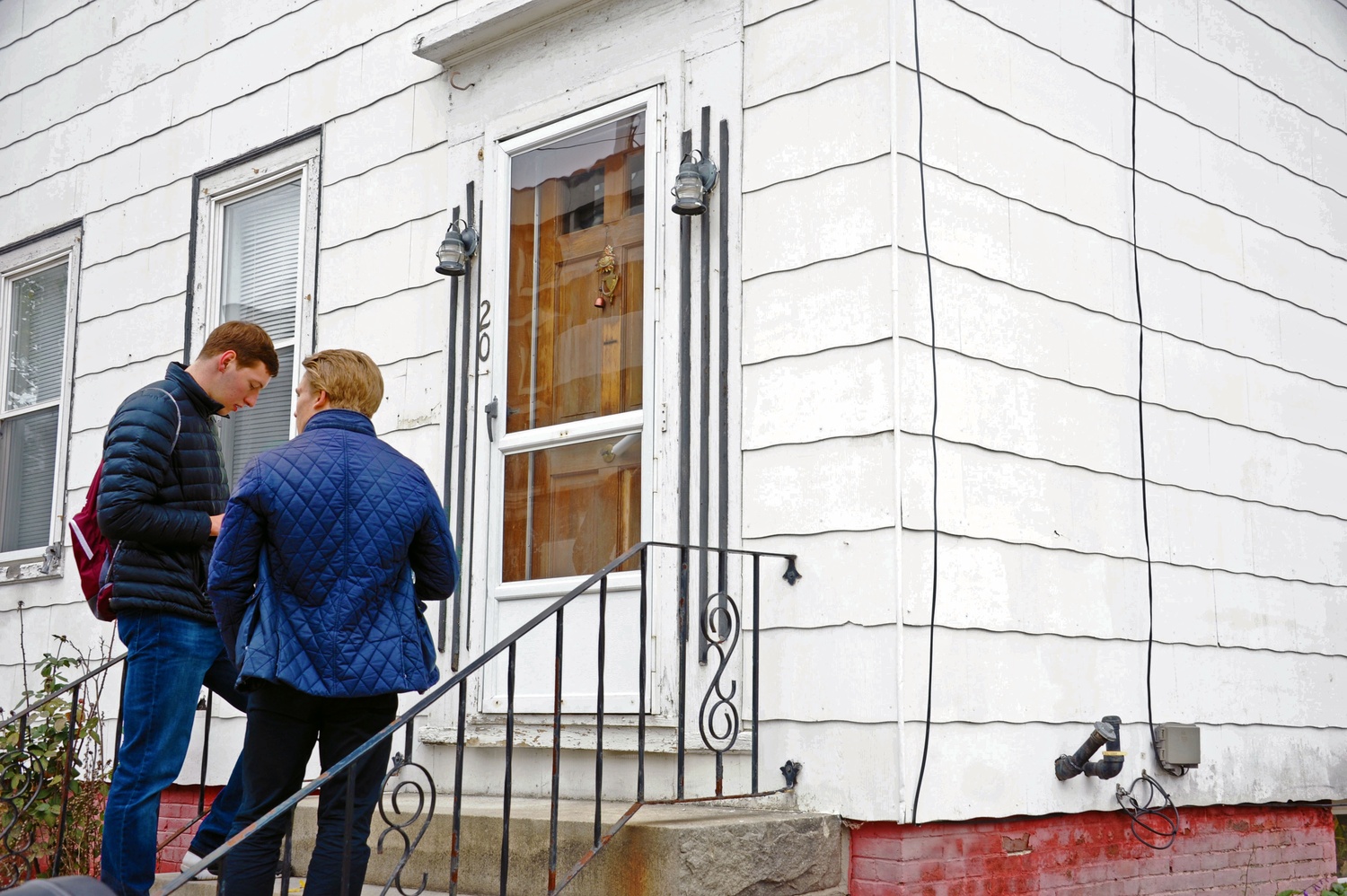 Kent K. Haeffner '17 (left) and Dustin L. Zacharias knock on a door in Laconia, New Hampshire, canvassing for the Republican Party. They were not canvassing in support of Donald Trump, however. Instead, they were rallying support for the New Hampshire senator Kelly Ayotte. By Derek G. Xiao

LACONIA, N.H.—It took two Harvard Republicans six hours to wind their way through more than eight miles of streets in this old mill town. They knocked on dozens of doors here trying to convince residents to vote for their candidate, crossing paths along the way with canvassers for Democratic presidential nominee Hillary Clinton.

But unlike most years—in fact, unlike any year since the group’s founding in 1888—members of the Harvard Republican Club were not canvassing for the Republican presidential candidate, Donald Trump. Instead, they drove two hours north of Cambridge to rally support for incumbent New Hampshire Senator Kelly Ayotte.

The two members, Kent K. Haeffner ’18 and Dustin L. Zacharias, a German exchange student, did not mention Trump when speaking to residents at their doors. In August, the Republican Club publicly denounced their party’s standard-bearer in a statement that criticized Trump as a “threat to the survival of the Republic.” Since the club formalized its stance, its members have focused on supporting candidates in down-ballot races.

Ayotte is in the final stretch of one of the tightest Senate races in the nation. Just weeks ago, it seemed as though her Democratic challenger and current New Hampshire Governor Maggie Hassan would safely prevail. FiveThirtyEight, a website known for its elections predictions, gave Hassan a 67.1 percent to win the election on Oct. 20, against a 32.9 percent chance for Ayotte. On Saturday, its updated predictions gave Hassan a 50.3 percent chance, against 49.7 percent for Ayotte.

Hoping to sway any remaining undecided voters, Haeffner and Zacharias met with Ayotte campaign staffer Elliot Gault outside Winthrop House early Saturday morning before the group made the trip up to New Hampshire, where other university students were also helping canvass.

“It’s coming down to the wire,” Gault said to them. “Your job today is not much more than just one question—who you support. Be sure to focus on the local issues.”

The Ayotte campaign views Laconia, a suburban community whose Main Street is still lined with mom-and-pop shops, as a city that could be indicative of how the rest of New Hampshire will vote.

“They call it a bellwether town,” Haeffner said.

“On election night, we’re going to be watching for this town,” he added. “And you can say, ‘We made this happen.’”

Saturday was the Republican Club’s second canvassing trip to New Hampshire of the general election, according to Haeffner, though there were “a lot more trips during the primary season,” especially for Marco Rubio and Jeb Bush, two former Republican presidential hopefuls.

Disappointed that their favored candidates lost to Trump, Haeffner said, “Lots of folks are just done with the election.”

“Frankly, I’m ready for it to be over too, but I want to make sure we win things like this race,” he added.

Zacharias, the German exchange student, said he is out on the campaign trail for the first time.

“I used to do this stuff in Germany,” Zacharias said about canvassing. “Naturally, I’m attracted to the conservative platform, so I looked up Kelly and thought coming out here today would be for a good cause.”

Some Laconian residents seemed to appreciate the canvassers’ efforts, saying they intended to vote Republican up and down the ballot. Others, believing that the students were campaigning for Trump, were initially put off. One even tried to close the door on the canvassers, until Haeffner and Zacharias said they were there for Ayotte.

“I know you don’t like the presidential candidateswe’re with you on that one,” Haeffner said to the resident as she began to shut the door.

The majority of doors Haeffner and Zacharias knocked on over the course of six hours went unanswered. The residents were the targets of several campaigns’ canvassing efforts: a pile of old political leaflets sat on the front porch of one house.

One homemade sign read, “Yes! I know who to vote for. No! You can’t change my mind. No! I don’t want to talk to you. PLEASE STOP. Printing political postcards–nobody ever reads them!”

Undeterred by such responses, Haeffner emphasized the importance of canvassing.

“Every voter we talk to is important, whether they’re undecided, for, or against,” he said. “If they’re for Kelly, then we have to make sure we robo-call them later to get out to vote; if they’re clearly against, we can make sure not to spend too many resources trying to change their minds.”

“The campaign that knocks on the most doors is usually going to win the race,” he added.