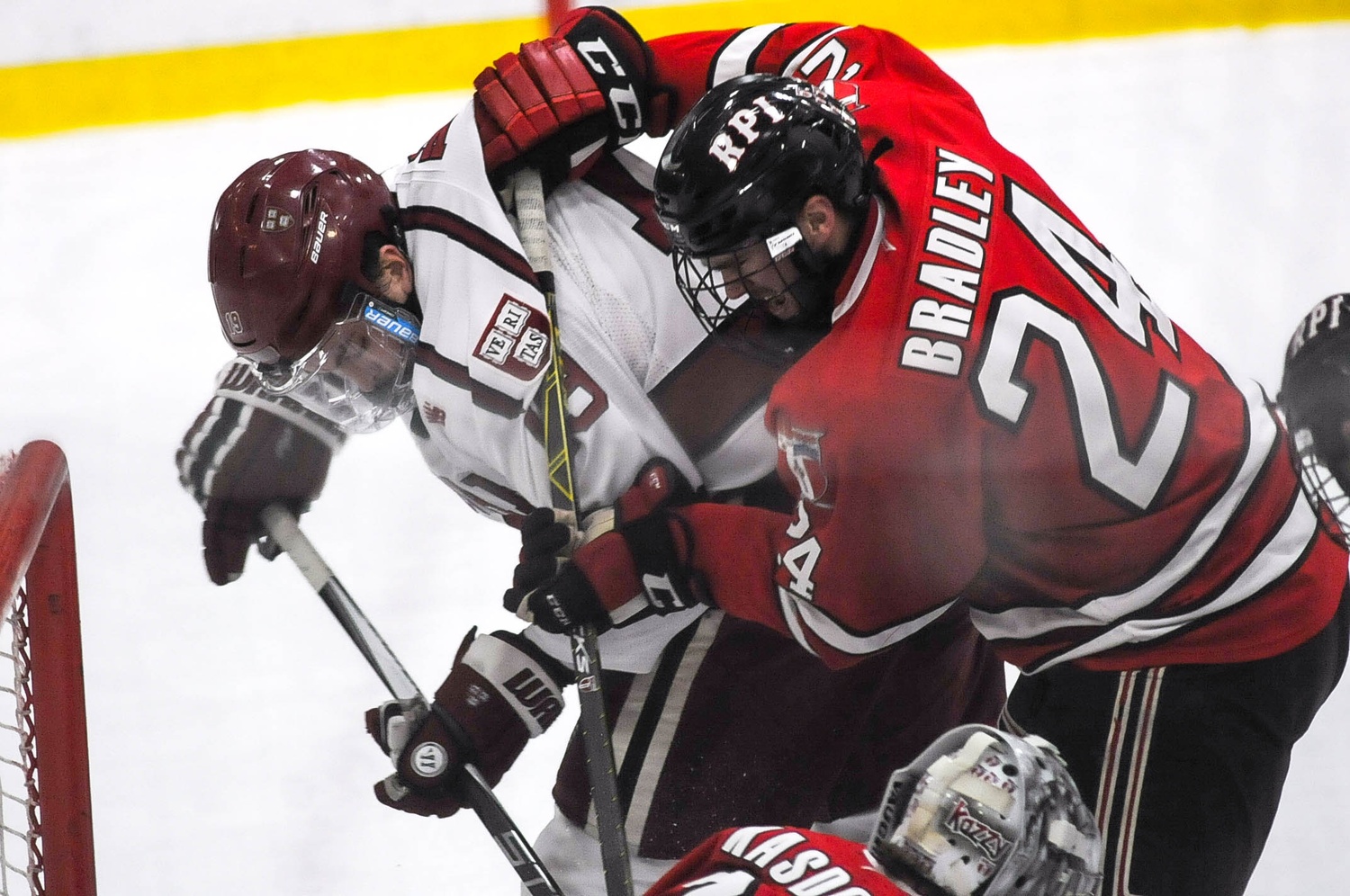 Co-captain Jimmy Vesey registered 13 shots on goal Friday night, but none of them found the back of a net in a 2-1 loss to RPI. By Y. Kit Wu
By Jake Meagher, Crimson Staff Writer

After its offense went missing in Monday's Beanpot consolation game, the No. 9/9 Harvard men’s hockey team answered with a season-best 50 shots Friday night against No. 18/- Rensselaer Polytechnic Institute. However, only one went in.

Sending the rest of them aside was Engineer goaltender Jason Kasdorf, who made a career-high 49 saves on the night, dropping the Crimson (13-8-3, 9-5-3 ECAC) to its fourth loss in the last five games—this one by a score of 2-1.

“Kasdorf, to me, is one of the top goaltenders in college hockey, and he made it a tough night for us,” Harvard coach Ted Donato ’91 said. “But as a coach, you’ve got to tip your hat and move on. I thought our guys worked hard and did a lot of the things we wanted to do and what we haven’t done in quite some time.”

The Crimson offense was firing at will for the entirety of the night, bringing its season shot total against the Engineers (15-10-6, 7-4-6) to a staggering 138—the sum of Harvard’s three highest shot outputs this year. Nonetheless, in the sides’ two most recent contests—the two that count towards the ECAC conference standings—the Crimson could not muster a win.

RPI got on the board a little over 11 minutes into the opening frame, answering a Brayden Jaw strike just two minutes prior.

With senior defenseman Phil Hampton streaking up the right wing, junior winger Jake Wood crashed the net. Once the blue-liner threw a wrister on net, the junior struck gold. Sophomore goaltender Merrick Madsen saved Hampton’s initial shot with his right pad, but standing inches away was Wood, who pushed home the equalizer.

“That settled us down,” said RPI coach Seth Appert, whose side was outshot, 19-8, in the first period. “They still had a lot of offensive zone time, but I thought we limited their elite chances after that."

Harvard continued to apply pressure at the start of the second period, launching the first eight shots of the frame and 13 in total, but the only breakthrough in the period belonged to the Engineers.

Sophomore defenseman Jared Wilson created the opportunity, firing a left-handed wrister at Madsen off an offensive zone faceoff—one that might have been "the only faceoff [RPI] won all night," Appert joked. But the puck never reached the net.

Instead, it bounced its way onto the back of rookie defenseman Adam Baughman, where it sat entangled in the freshman’s jersey. With seven confused skaters surrounding him, Madsen included, Baughman eventually reached behind him and jarred the puck loose.

But once the puck hit the ice, the first one to locate it was sophomore forward Kenny Gillepsie. The Morrisville, N.C., native wasted no time backhanding the bouncing puck into Madsen’s net before anyone had a clue what had happened. Despite being outshot at the time, 27-10, the Engineers had their first lead of the night.

“I think that the puck was in his jersey for probably three or four seconds,” Donato said. “It’s hard. Sometimes the game clock and your mind don’t always match up, but it seemed like it was about three seconds where nobody knew where the puck was…. The referee said that he knew where the puck was and thought it was still alive, but to me personally, I would’ve thought there’d be a whistle there.”

That was all the offensive support Kasdorf would need. With the victory, RPI jumps to 16th in the PairWise rankings and pulls within one point of the Crimson for third place in the ECAC. Meanwhile, Harvard drops to 12th in the PairWise and is now one loss away from potentially falling out of the top four in the conference, which would mean losing a first-round bye in the ECAC tournament.

The result looked like it might have been different early, as Harvard burst out of the gate in the first period with 12 of the game’s first 15 shots and 19 in all for the frame. Midway through the period, Harvard broke through with a tip in front of the net.

Skating behind the goal, junior forward Luke Esposito spotted Jaw atop the right faceoff circle, and the blue-liner sent an off-balanced one-timer on goal, which skipped into the back of the net to temporarily put the hosts in front.

“On that play, we had traffic,” Donato said. “There [were] a lot of people swarming around in front of the net, and that’s the only way [Kasdorf] was going to get beat tonight.”

The goal at 9:22 marked just the third goal of Jaw’s career and his first of the season, but it would stand as the Crimson’s only conversion of the night. Harvard has now scored just one goal in three consecutive games—all losses.